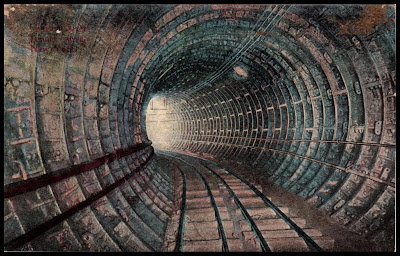 All great cities are dependent upon a concealed underworld network of subterranean conduits, tunnels, tubes and pipes for the supply of public utilities, communication links, water and sewage and public transport. It’s a world that despite its ubiquity is largely unseen and unexplored. Haruki Murakami is one contemporary writer whose imagination persistently draws him into confrontation with the mortal dread that resides in the permanent darkness of the half spaces and unrecorded shafts and chasms that proliferate in the hidden depths below our familiar city streets. The claustrophobic horror of underground confinement and premature burial is a constant thread in the Wind-up Bird Chronicle. There’s an echo of that stone cold terror in the postcard image above of an empty subway tunnel in which the viewer is siphoned off into a phosphorescent uterine oblivion. 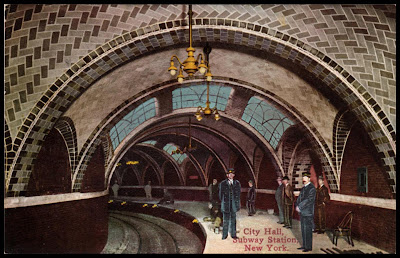 In recent months we have travelled below the surface of Chicago and Boston via the medium of postcards and today is the turn of New York. These cards are almost exactly a century old and at the time they were produced served as stunning visions of a new world of rapid transit. Driving tunnels through the ancient geology, undisturbed since the separation of the continents, brought a human presence into hitherto unexplored regions. The impudence of this activity might have given rise to some anxiety but it seems the advantages of travelling at speed from Bedford Park to Sheepshead Bay far outweighed it. In this new underworld, far below the landmarks that exist in the surface world, the disorientated traveller had to learn to navigate by reference to route diagrams. Today’s seasoned subway rider, skilled in the art of contending with overcrowding, crime and disorder would find this the least of the discomforts to be encountered en-route. 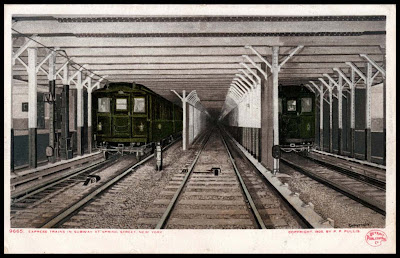 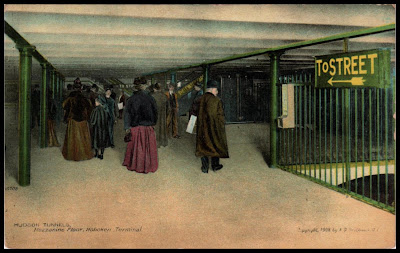 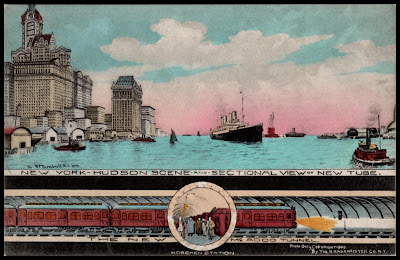