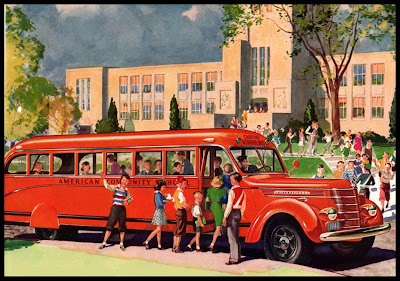 (Gary) “U.S.” Bonds was in the charts in 1961 with this title. USB (as we shall call him) cultivated a raw and primitive sound as if recorded inside a dumpster. Ry Cooder, who always had an ear for a good tune, performed it on stage and included it on his Showtime album. A decade later in 1972, Frank Zappa protégé, Alice Cooper had a hit with “School’s Out” thus kicking off a long career march that has climaxed with his recent TV ads for Sony Bravia. This euphoric moment in the school day is recorded in these advertising illustrations that include images of the great American school bus painted in the regulation shade of National School Bus Glossy Yellow. 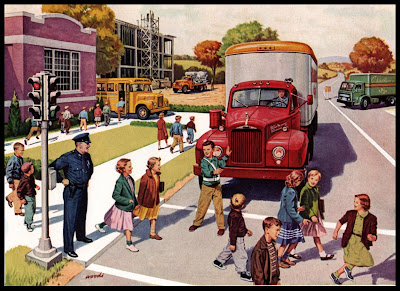 The school bus occupies a key place in the iconography of the American vernacular. This is not easily understood on this side of the Atlantic where the mundane business of school transport is utterly devoid of mystery or glamour. The great barometer of the American vernacular, the Saturday Evening Post cover, regularly featured illustrations on this theme, in particular from the great John Falter whose work can be seen below on the right. The example on the left is by Ben Prins. 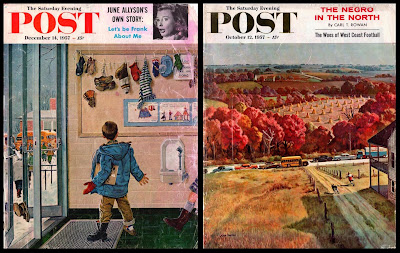