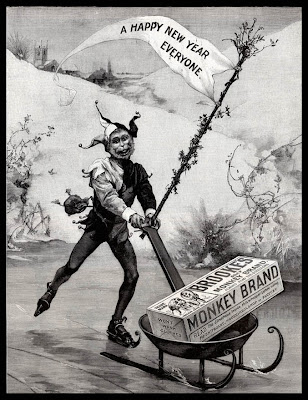 Our simian jester braves the cold to glide with grace across the frozen lake to wish us all A Happy New Year. The year in question was 1900, the last year of the 19th. century. Oscar Wilde and John Ruskin died that year; Aaron Copland, Ayatollah Khomeini, Luis Bunuel and Jacques Prévert were born. The Exposition Universelle opened in Paris in the spring and the first Métro trains ran in July. In South Africa the Boer War was in full swing providing the indigenous population with the diverting spectacle of two groups of colonists slaughtering one another in pursuit of gold. The "Society of Righteous and Harmonious Fists" was engaged in violent resistance to Western Imperialism in China and lay siege to Beijing for 55 days.
Posted by Phil Beard at Thursday, December 31, 2009