Postcard of the Day No. 40, Porte Dauphine 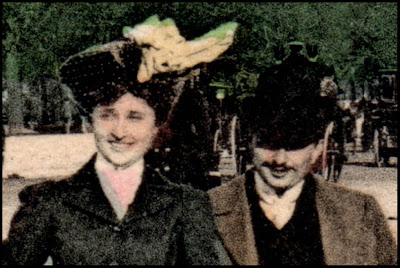 Taking a break from the delights of Merseyside, we return to the familiar streetscape of Paris. To Porte Dauphine in the north-west of the 16e where the last surviving Hector Guimard édicule marks the western extremity of Métro line 2. This is Paris at the turn of the century, the city of La Revue Blanche and Les Maîtres de l’Affiche. A low wintry sun slants across the wide open space of what is now avenue Foch, the haute bourgeoisie is taking the air. Horse-drawn transport monopolises the view, motor vehicles have yet to intrude on the scene. A mother and daughter hold hands as an officer of the law, complete with obligatory moustache, passes by. Fin-de Siècle fashion victims take centre stage, skirts are raised above street level by well-practised gloved hands and the prudent carry tightly furled umbrellas at precisely the correct angle. The two couples walking towards us make an interesting contrast between confidence and pretension. The couple on the right have a prissy air about them that betrays a certain anxiety to conform but it’s the couple in the centre who compel attention. This is a gentleman whose raffish grin has escaped from the deep shadow concealing the rest of his face and exhibits the self assurance to defy convention by wearing an unbuttoned overcoat. His companion favours the camera with a pert smile with just the tiniest hint of intimacy while the miracle of modern corsetry enables her to flaunt an unfeasibly slender waistline. The transformative power of the carte postale has extended the life-span of their images and there remains something impressive in the way they stride with purpose towards a new century, happy and contented with their anonymous parts in the great human comedy. 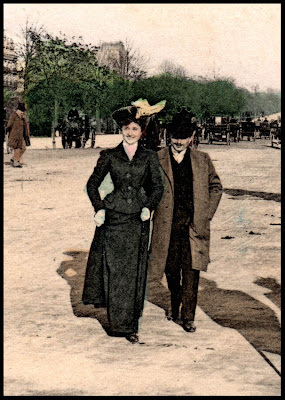 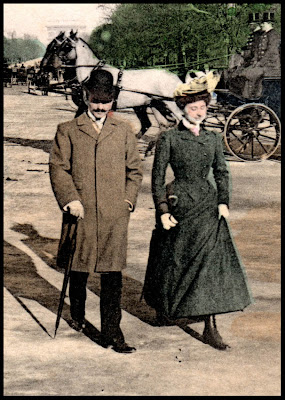 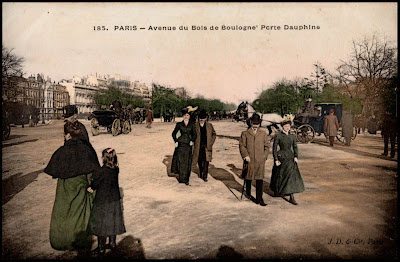