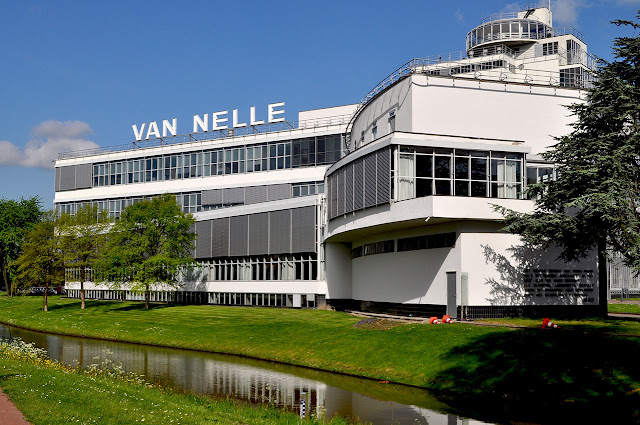 A mile or so to the west of Rotterdam Centraal stands a factory complex known as the Van Nellefabriek that has an international reputation as a major development in the evolution of the modern factory. Built between 1926 and 1931, the processing and packaging of tobacco, coffee and tea products continued until 1998. It has been celebrated in all the historical surveys of Modernist architecture and after a visit in 1932, Le Corbusier gave it his seal of approval. In 1987 the business was taken over by Sara Lee/Douwe Egberts who implemented a closure programme from 1995. Since final closure the premises have been converted to office and studio use (known as the Van Nelle Design Factory) whilst the appearance of the original factory has been carefully preserved. In 2014 the factory was designated as a World Heritage Site in recognition of its international importance as an early example of a vertically organised daylight factory. 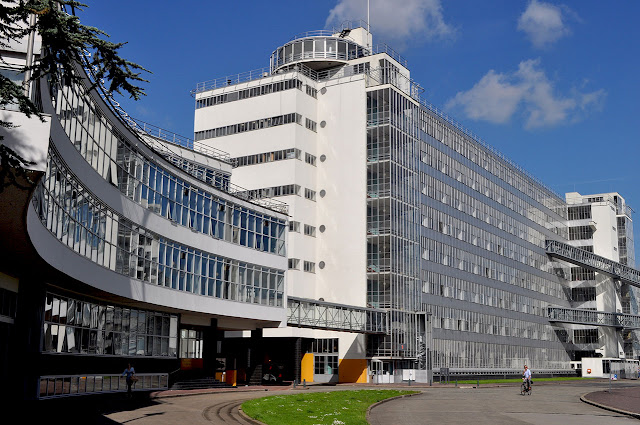 The site was chosen because it offered easy access to rail and canal transport – the factory is a prominent landmark on the mainline between Rotterdam and Amsterdam, advertising its presence and products to a daily audience of many thousands. The glazed façades and curtain wall construction, the generosity of scale, the brilliantly illuminated workspaces, and the visual drama created by an ensemble of crisply contrasting forms collectively proclaim that this was manufacturing for a new age of advanced technology and consumerism. Building on a greenfield site marked an escape from the congestion and pollution of the inner-city. Drawings and plans were drawn up in 1926 by Brinkman and Van Vlugt and the concrete superstructure went up in 1927. 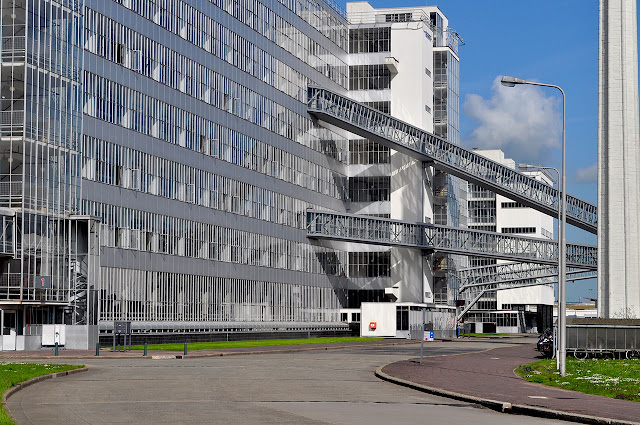 The low-rise office building is the most visible feature from passing trains and the name of the business is prominently lettered in red neon on the top. There are two wings one of which is rectilinear while the second curves. Where the two wings intersect the transition strongly resembles naval architecture. The maritime theme is enhanced by the view of the bridge-like rotunda on the summit of the factory building. The seven storey factory block with its serial geometry of overall glazing and slender steel supports has the strongest association with Modernist principles. 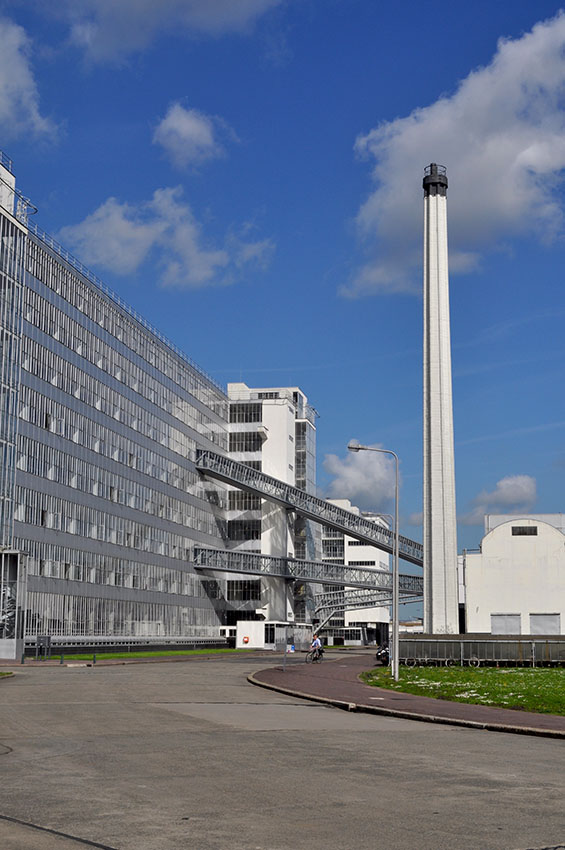 The anatomy of the business (which began in 1782) is interesting, built on three raw materials, imported in bulk from distant continents, sorted, dried, ground and blended before being packaged and dispatched for retail. Each commodity had its own dedicated building with by far the greater space allocated to tobacco where the packing floors were connected to the dispatch building by overhead glass-walled chain driven conveyors. The theatrical quality of this aerial movement has helped to define the way that the factory has been defined in the public mind as something special and worthy of preservation. 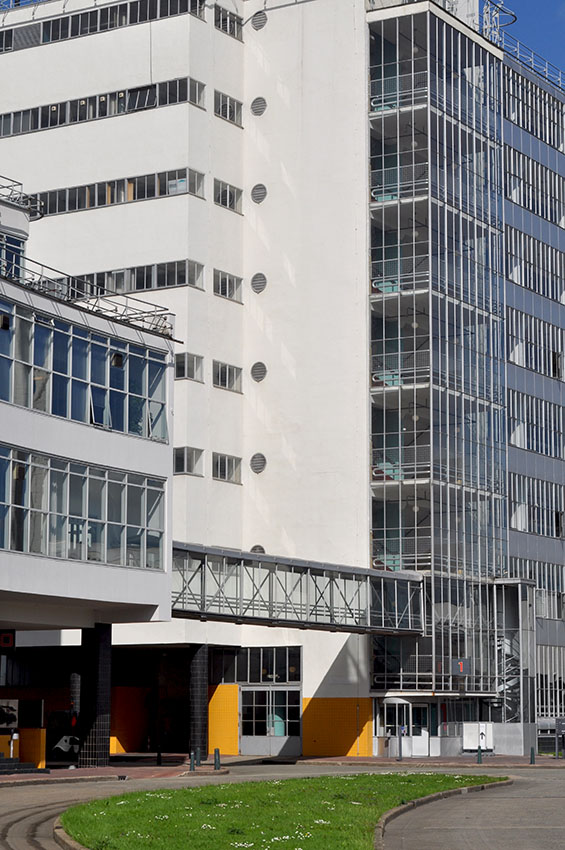 Which leads us to the mythology and hyperbole that accumulates around highly regarded buildings. The nomination document reaches for such phrases as “a lucid poem in glass and steel” and “an ode to light” whilst locating elements of humanism and spirituality in the factory complex. The more prosaic reality is that a long-established business, guided by a need to rationalise production in a purpose built facility had the vision to take advantage of the most up to date design and building technology. Efficiency, productivity and the avoidance of waste were economic imperatives that inspired large open workspaces designed to move commodities through the manufacturing process with the minimum of energy. The driver of the project was the senior proprietor, Kees van der Leeuw – a progressive businessman with an interest in art and philosophy and the ambition to develop a contemporary manufacturing facility that embodied the highest principles of design, technology and enlightened labour relations. Facilities for staff included generous playing fields, recreational open spaces, a library and canteens for office and factory workers. 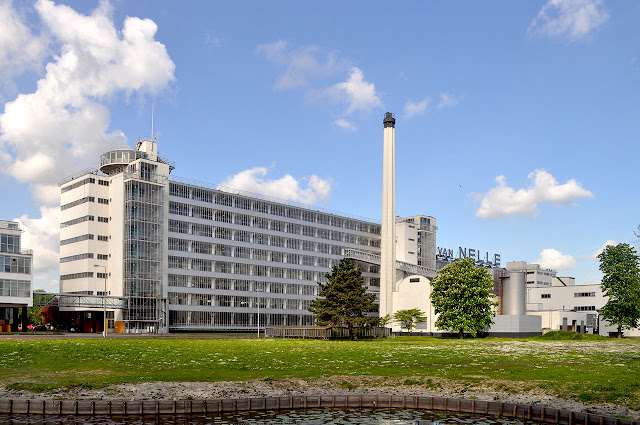 The last word goes to Le Corbusier who wrote the following after his visit in 1932:

The sheer façades of the building, bright glass and grey metal, rise up ... against the sky ... The serenity of the place is total. Everything is open to the outside. And this is of enormous significance to all those who are working, on all eight floors inside ... The Van Nelle tobacco factory in Rotterdam, a creation of the modern age, has removed all the former connotations of despair from that word ‘proletarian’. And this deflection of the egoistic property instinct towards a feeling for collective action leads to a most happy result: the phenomenon of personal participation in every stage of the human enterprise. 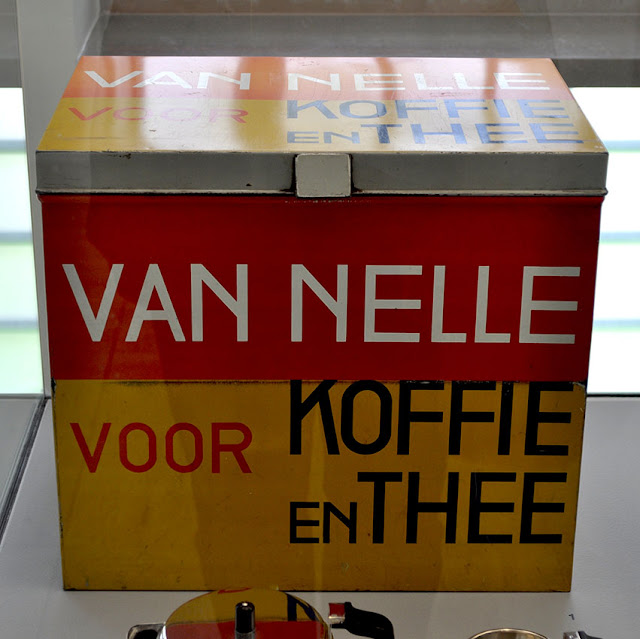