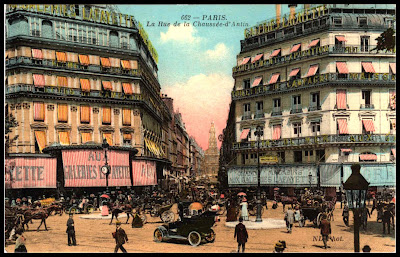 Les Grands Boulevards has been the commercial heart of Paris for 150 years. Broad, spacious and tree-lined avenues of standardised apartment houses, banks, department stores, hotels and major retailers run east and west between la Madeleine and Bastille. The relationship between building heights and the width of the boulevards follow the formulae established by the infamous Haussmann and his successors. Roof profiles and detailing of facades were subject to similar controls and formed part of the overarching scheme to impress the observer with stunning perspectives on a vast scale. The mighty engine of the 19th. century Parisian department store is exhaustively described by Zola in his 1883 novel, Au bonheur des dames. Zola’s vision places the store at the centre of a vortex in which massive consignments of manufactured goods are engulfed, circulated, fragmented and finally expelled into the homes and salons of the city, leaving behind enormous amounts of stored energy in the form of cash. The elimination of small shops and the destruction of long established communities as the new boulevards blitz their way through is another part of the story. 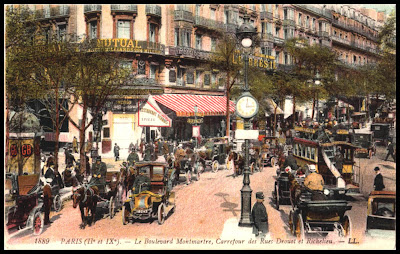 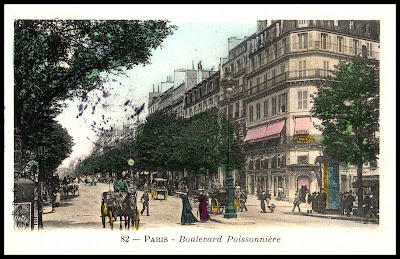 Our postcard tour of the neighbourhood shows the scene some 20 years after Zola described it but little has changed. Horse drawn transport is sharing road space with primitive motor cars and commercial signage proliferates in that uniquely Parisian way. Men, invariably wearing hats, and less frequently, women of all social classes hustle through the streets. Crowded pavements, traffic congestion and blurry indistinct images from lives lived and lost bring the scenes to life. The power of business and commerce, as Zola observed, drove human behaviour to an ever more frenzied pitch of activity. 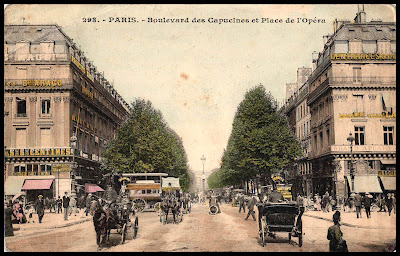 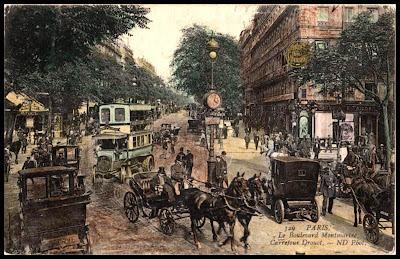