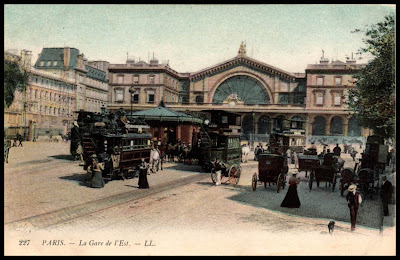 With Monet, Manet and Caillebotte fully occupied painting in and around Gare Saint-Lazare it was left to artists of lesser stature to explore the Gare de l’Est. This station was the principal point of departure for the Front in the First World War. Maximilien Luce, the most politically committed of the Divisionist painters, employed the station and its surroundings as the setting for a number of compositions showing new recruits departing in a fervour of patriotism and returning in a state of shattered desperation. Around the back of the station is a flight of steps leading to rue d’Alsace from which there’s a strangely unsettling aerial view of the platform canopies. Luce’s painting, Escaliers de la rue d’Alsace, 1916, shows a location little changed in almost a century although the footbridge that Luce includes in the upper right has either been removed or perhaps never existed in the first place. 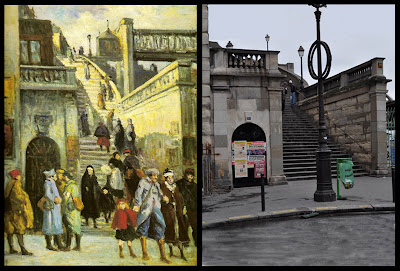 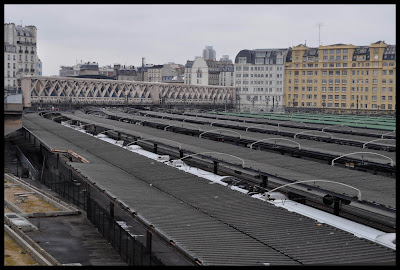 Gare de l’Est is the only Parisian station to display a painting, a large mural sized work donated by the artist, Albert Herter (1871-1950) entitled Le Départ des poilus, août 1914. Herter was an American artist, resident in Paris who presented the painting in memory of his own son, a casualty of war. The painting serves as a solemn reminder of the shockwaves of armed conflict. 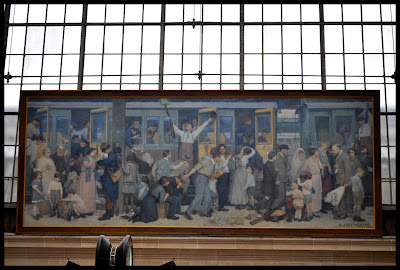