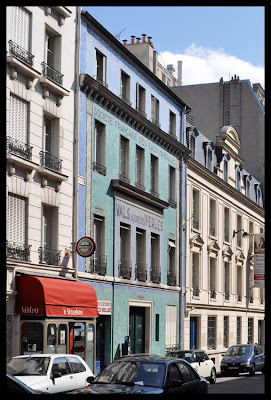 Rue de Londres runs at an angle across the tracks leading out of Gare St-Lazare between the Place de l’Europe and Sainte-Trinité. The reason for exploring this street is the blue and green tiled facade at No. 30, designed to serve as a giant advertisement for a former occupant of the building, Société Française des Eaux Minérales. The use of ceramic tiles has conferred a degree of permanence that a painted facade would never have acquired. The building is of late 19th. century origin and the ceramic facade was installed around 1920 by the firm of Fourmaintraux & Delassus, specialists in faïence and stoneware based in Desvres, near Boulogne, most of whose work is to be found in the north of France. The mineral water business has long since departed leaving behind twin cascades of gas bubbles, gently descending the building. 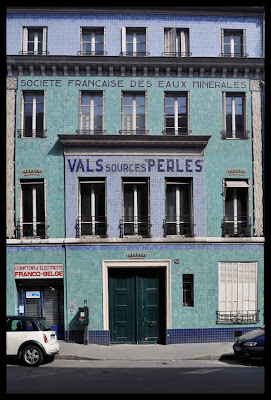