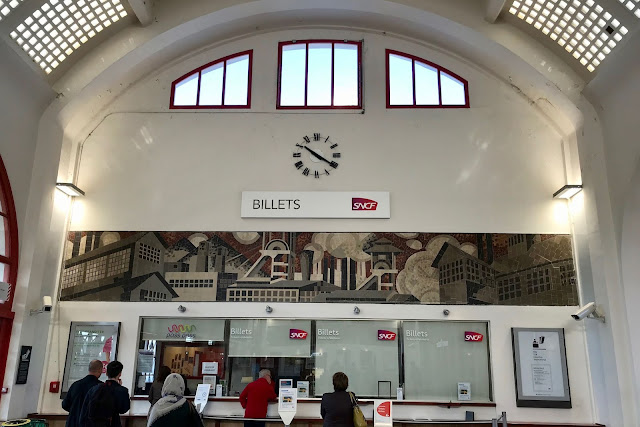 Coal mining was the major activity for over a century in the medium sized town of Lens in Northern France but none of it remains today. Like many similar towns and cities in Britain it has struggled to find a new role for itself. In an effort to attract tourism, an annex of the Louvre (Louvre-Lens) opened in 2012. The gallery displays a selection of artworks brought from Paris for a provincial vacation. Visitor numbers have fallen from 900,000 in the first year to 450,000 in 2017 which suggests the Bilbao-effect is fading fast. Some of these visitors will have arrived by train in which case it’s to be hoped they had a good look at the station buildings or they would have missed one of France’s most distinctive and eccentric station buildings. 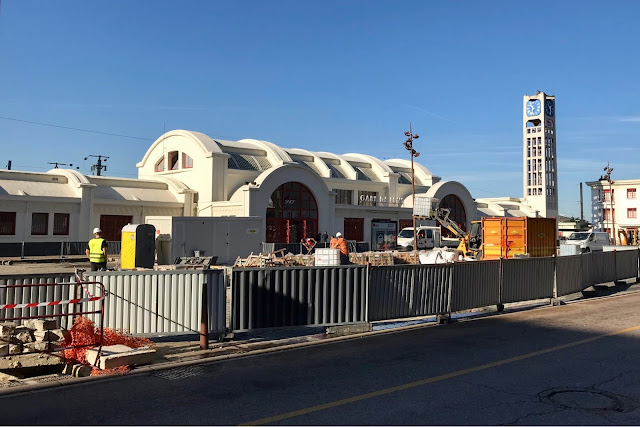 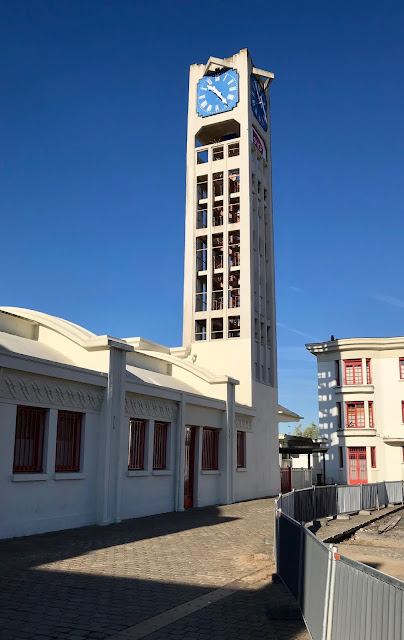 The present Gare de Lens was designed and built 1926-27 by architect, Urbain Cassan (1890 - 1979). Cassan also designed stations for Senlis, Brest and Saint-Quentin and later was involved in the design for the Tour Montparnasse (1973). For Lens, Cassan came up with a plan said to be inspired by the shape of a steam locomotive boiler in which the rounded arches represent the wheels and a tower to represent the funnel. The concourse and booking hall was decorated on all four walls with mosaic panels that portrayed the local industry, coal mining and the miners who extracted the coal in stylised pictorial form. They were the work of Auguste Labouret (1871-1964). Labouret was principally a stained glass artist with a reputation for the sensitive restoration of church stained glass. But he often worked on railway stations, among others, Saint Quentin (also designed by Cassan), Lyon and Gare Saint-Lazare. 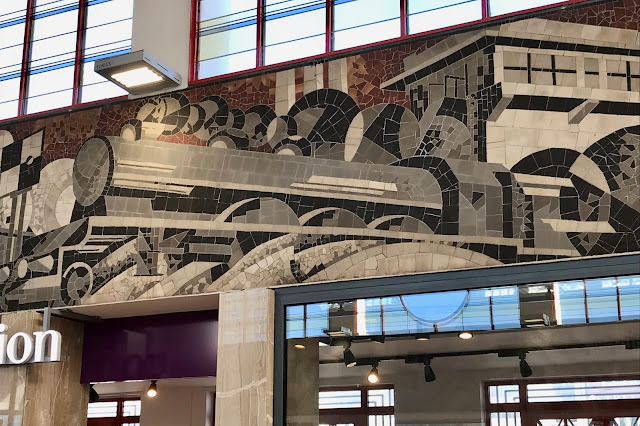 Each decorative panel is about 1.5m in height, extending to almost the full width of the station interior. Over the ticket windows we see colliery winding gear and associated industrial buildings in a modified Cubist idiom. Another panel is flanked by grim-faced miners, shouldering pick-axes and gripping miners’ lamps against a backdrop of pit-heads, slag heaps and smoking chimneys. The third panel is a landscape of bridges and factory buildings with cargo ships and tugs. The final panel (and the one that greets the arriving passenger) continues and develops the communication theme, pipes and tubes, telegraph wires to one side – on the other a massive steam locomotive powers its way into the composition. The installation appears to be made with standard-size tiles, some of which are laid intact, though most are fragmented to a greater or lesser degree. The colour scheme is a muted harmony of blacks, whites, greys and brown. 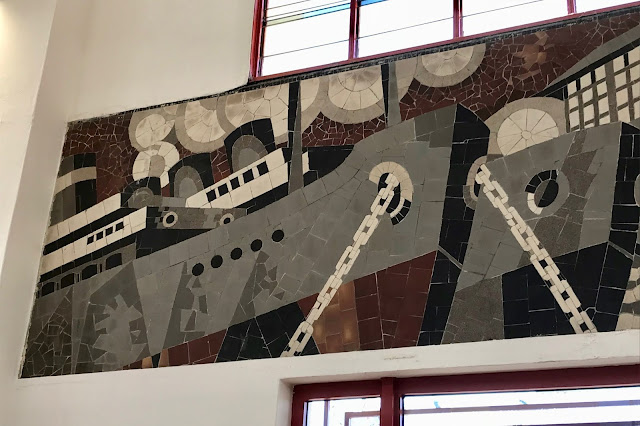 The station buildings and the tower are all rendered and painted white with decorative patterned concrete mouldings. The Art Deco-inspired window frames are formed of slender, geometric glazing bars, painted in red. A Deco-styled font was used for the original cast iron signage on the platform. To see the resemblance to a steam engine requires a little imaginative effort but it remains a splendid conceit and the only scheme where Cassan attempted anything like it. To their credit, SNCF maintain the building in first class condition. 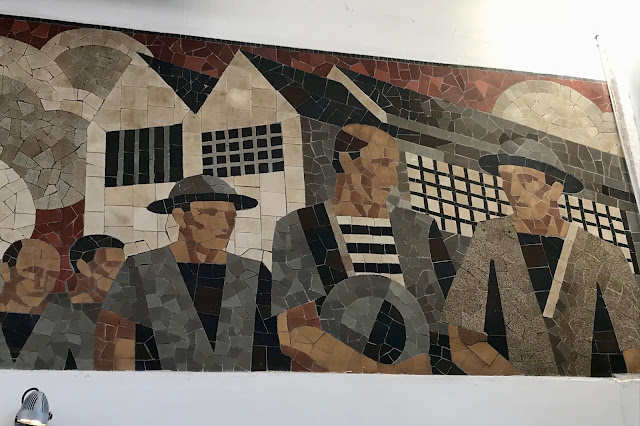 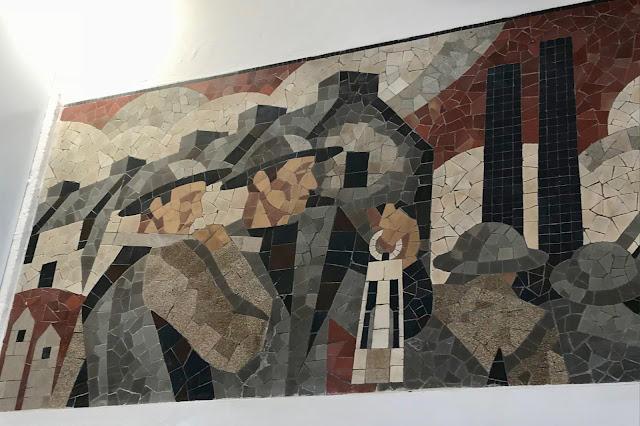 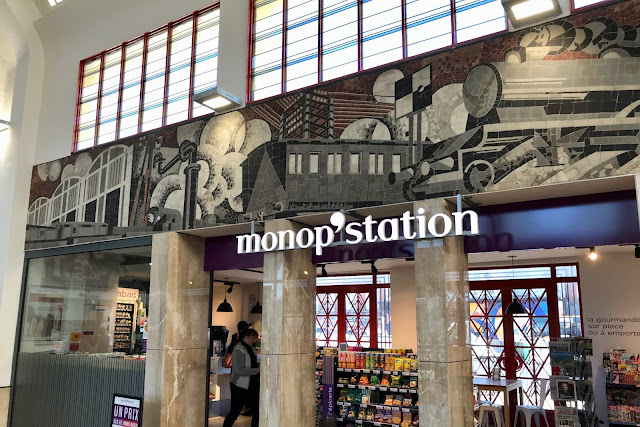 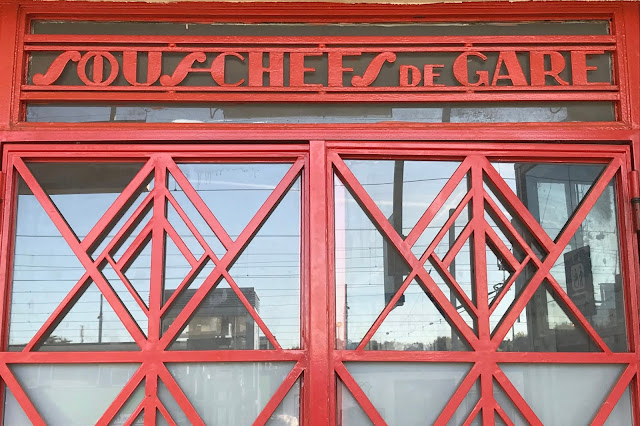 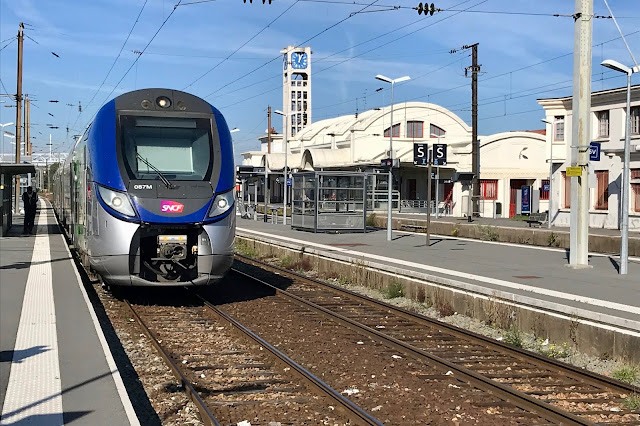