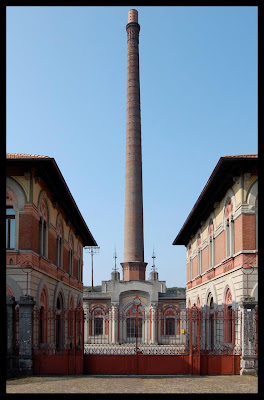 The Italian association with cotton goes back to the 12th. century when the Venetians began importing from Asia. The techniques of mass production of textiles developed in the Industrial Revolution and the Owenite philosophy of model factory communities jointly inspired the planned industrial settlement of Crespi d’Adda near the city of Bergamo on the border between the Duchy of Milan and the Republic of Venice. Work began in 1878 with construction of a massive cotton mill that at the height of its activity employed 4,000 workers. The proprietors, the Crespi family, planned and developed homes for the workforce plus social infrastructure, including school, church, community centre, shops and an enormous cemetery. The provision of a cemetery ensured that employees could catch a daily glimpse of their final journey on this earth with a leftward glance as they passed through the factory gates. 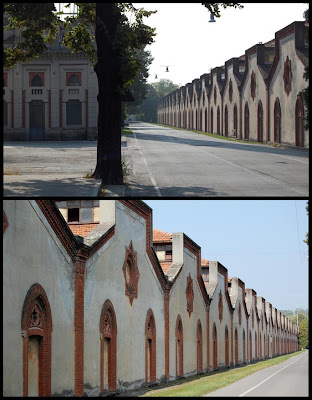 The factory was conceived on a grand scale and entry was via decorated wrought iron gates, a central courtyard, two-storey administration and office buildings of symmetrical appearance and a central towering factory chimney, the whole ensemble calculated to impose and impress. An extensive sequence of single storey workshops with elevated galleries to maximise the daylight produces an impressive perspective enhanced by the repetition of terracotta detailing. Aerial views reveal the full scale of the factory complex and the rectilinear grid on which everything has been planned. The business was immensely profitable and like many others before and since, the Crespis bought themselves a national newspaper (Corriere della Sera) as a vehicle for their opinions. The slump in demand for textiles that followed the Wall Street Crash bankrupted the business and the Crespi’s wealth rapidly evaporated. 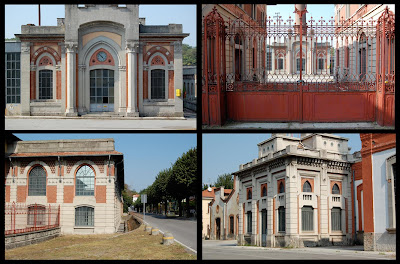 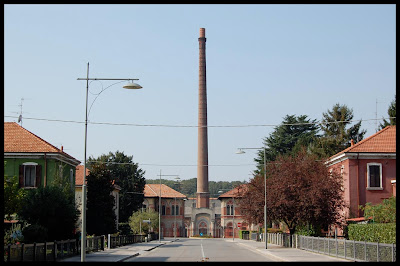 Silvio Crespi, son of the founder had spent some time in England working at Platt Brothers (manufacturers of textile machinery) in Oldham and there was an English flavour to the project. The worker housing is opposite the factory and set out on the same axis, in a network of streets running either side of a central avenue leading in one direction to the factory gates and in the other to the shops and recreational space. The fifty houses are semi-detached, with hipped roofs and were consciously designed in what was considered to be an English style and came complete with garden plots intended for growing produce to encourage self-sufficiency. The repetition of forms, the absence of pavements and the ubiquitous lattice fencing of uniform height create a very distinctive streetscape that somehow feels neither Italian nor English. 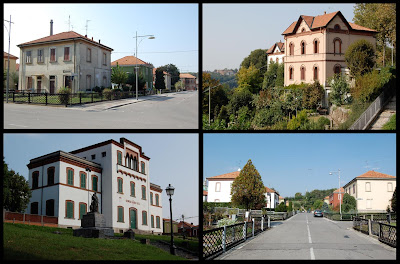 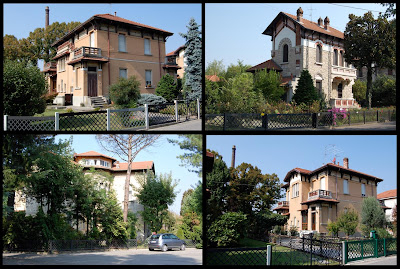 Social distinctions were preserved with the provision of generously proportioned detached villas for directors and senior staff. The villas were each individually designed and built to a high standard with lavish architectural ornamentation to reflect their status. The air of exclusivity is reinforced by an abundance of mature woodland. The doctor and the priest were rewarded with especially large detached villas on the hillside overlooking the village and factory. From his vantage point the priest would be well placed to keep an eye on his splendid church below, a replica in every detail of the Renaissance basilica at Busto Arsizio, home town of the Crespi family. The Crespis themselves occupied an extraordinary medieval fantasy castle topped by row upon row of battlements that towered over the entire settlement. The Italians describe this style rather neatly as feudo industriale. 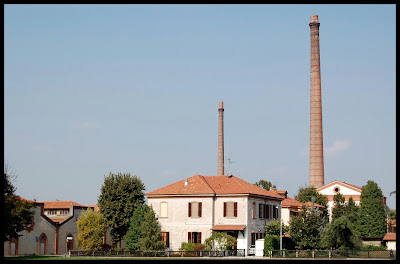 Exploring the settlement on foot is a theatrical experience. The factory buildings are deserted and locked (production finally ceased in 2004 after decades of decline) while the residential areas are fully occupied and exude an air of prosperity. The homogenous character has been preserved as part of the management plan conditional upon World Heritage Status, which makes for a tidy appearance at the expense of diversity. The long perspectives of dwellings and factory premises leave a dreamlike impression in the mind – it requires an effort to associate them with the smoke, grime and cacophony of the industrial process. The great citadels of industry possessed a majesty of scale that exercised a powerful hold on the imagination of painters in various genres from the Impressionists to the Precisionists via the Surrealists and die Neue Sacklichkeit. Giorgio de Chirico spent some of his formative years in Milan and Turin, Italy’s industrial heartland and it’s tempting to suggest that the image of the factory became part of his consciousness and re-emerged in the pictorial vocabulary of his compartmented still-lives. More information and pictures can be seen by following this link. 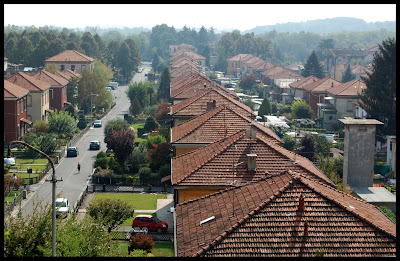 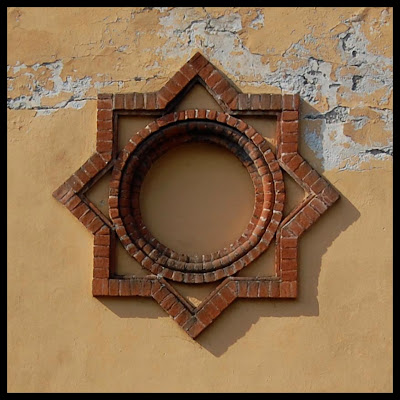