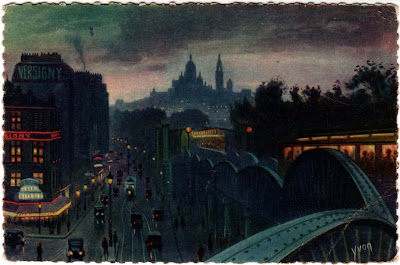 In 1933 Brassaï published one of the greatest of all photo-books with the title Paris de Nuit. These Parisian postcards from a series published by Yvon (Féeries Nocturnes de Paris) are contemporary with Brassaï’s book. The image above shows Métro line 2 on its elevated trajectory overshadowed by the oppressive profile of Sacré-Coeur, a standing reproof to communards everywhere. A velvety darkness descends upon the city. The lights of the station platform and the café below at street level offer a warm, welcoming glow. The station is La Chapelle, not the most salubrious in the city. Out of sight on the left is the vast expanse of tracks leading into Gare du Nord. The image below is a magnificent set of Parisian clichés gathered around La Rotonde café in Montparnasse. An artist crosses the road complete with beret, pipe, beard, plus-fours and a portfolio under his arm. In front of the café an African street trader attempts to interest passers-by in his ethnic craft products. The glow of the café interior is reflected in the rain washed pavement. A Guimard style candlebra looms over the Métro entrance. Simone de Beauvoir lived in a family apartment above La Rotonde when she was a child and on August 12th. 1916, Picasso and a group of friends, including Max Jacob and Modigliani, had lunch here and clowned around outside in front of Jean Cocteau’s camera. These photographs were traced and expertly collated by Billy Klüver in his fascinating book, A Day with Picasso. 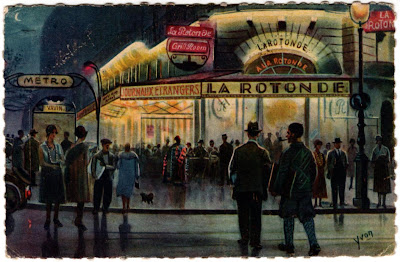 I am a consultant with the San Francisco Symphony's Keeping Score Education Program. I am interested placing an image of the postcard "Cafe de la Rotonde" which you post on your site on a document describing Paris in the early 1900's.

Can you direct me to the original? Can you grant me permission to use the image for a professional development event for teachers? What is the attribution?