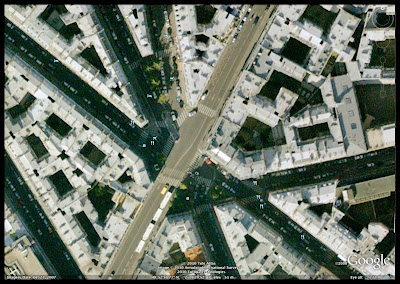 I keep returning to this place with my postcard of Caillebotte's Temps de Pluie in the faint hope I can get closer than before to photographing what Caillebotte saw. The traffic signals, trees and parked cars don’t make it easy but the truth is that Caillebotte massively enlarged the roadway in the foreground to create a deeper space for the figures and an unmodified photographic image cannot convey this. My photoshopped abomination (see below) is a crude attempt to show how this might have been done but I’m afraid it’s not very convincing. 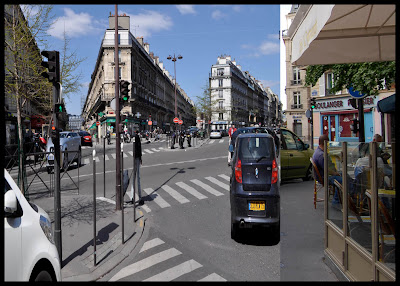 Caillebotte chose well when he selected this point where traffic converges from no less than 8 directions. Oppressive wedges of masonry thrust into the field of vision and suggest that a significant part of the artist’s ambition was to explore discrepancies of scale and the impact of those discrepancies on the populace. This was the face of the modern metropolis in 1877 and there were many voices that deplored the loss of the city’s ancient street patterns and denounced the replacement buildings for their dehumanising geometry and scale. Temps de Pluie seems to express both fascination with the physical immensity and unease at the dominating presence. The painting has things to say about the ways in which the built environment can affect the deeper levels of human consciousness and how the texture of the world we inhabit contributes to the ways we define ourselves. What makes it a major painting is its poetic presence – the colour values, the tonal subtleties and the atmospheric saturation all combine to offer us a deeply mysterious image that embodies a disturbing sense of alienation in a world of minimal human interaction. A single instance has been abstracted from the great continuum of human experience and exhibited for contemplation as an object of wonder. 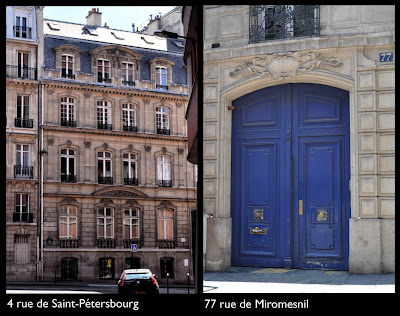 Parisian painters thoroughly colonised this corner of the city. Manet’s studio was less than 5 minutes away at 4 rue de St-Pétersbourg and the Caillebotte family home at 77 rue de Miromesnil was not much more than a 10 minute journey on a route that runs across le Pont de l’Europe (scene of Caillebotte’s other major painting) and along rue de Madrid. While in the neighbourhood we photographed some of these places, not to add to the sum of human understanding but because it would have seemed discourteous not to do so. With the added attractions of Gare St-Lazare and its associations with Monet, Zola and Jean Renoir I could be tempted, funds permitting, to buy myself a top floor apartment in the locality and enjoy the sort of views that this young woman can see from her balcony. 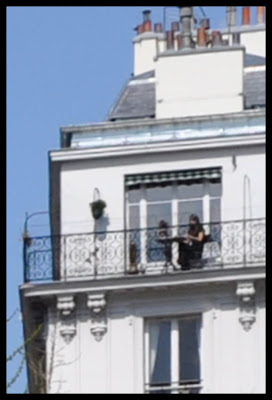