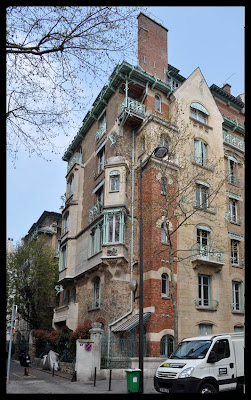 For nearly 20 years the Divisionist painter Paul Signac lived here in a sixth floor studio apartment. It was November 1897 when he moved in and he seems to have been delighted with his new home, describing it to his friends as “ultra-modern”. That reminds us that today’s period piece was once the last word in modernity. The architect, Hector Guimard, created a design vocabulary of such intensity that it persists in the contemporary imagination as a uniquely powerful emblem of fin-de-siècle Europe. This was Guimard’s first major building and challenged all the principles and conventions that defined Haussmann Paris. Homogeneity in appearance and proportion was discarded in favour of a facade divided vertically rather than horizontally, finished in a variety of surface treatments and supplied with windows of different sizes and shapes. 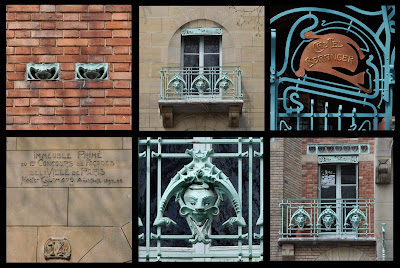 For such an individual building this one is quite easy to miss. It’s on a busy street in the 16ème, partially concealed by trees, opposite La Poste with a large produce market outside. It’s not a building that loudly proclaims its presence and its eccentricities reveal themselves slowly. But once you get your eye in, it’s stuffed with extraordinary details and what you see is a virtuoso performance in the art of imposing organic form on resistant materials. 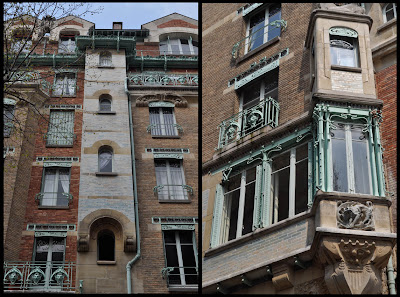 History records that the developer employing Guimard on this project was a model of compliance, permitting the architect almost complete control over every aspect. Though it may seem that Guimard’s passion was to create an Art Nouveau extravaganza he was equally dedicated to building light, airy and spatially efficient apartments that would be a pleasure to inhabit. It was intended as the affordable housing of its day. Each of the 36 apartments was unique in terms of layout and came supplied with fixtures and fittings designed by Guimard. The shared spaces were furnished with carpets, hand rails, stained glass, wallpapers and decorative ceilings, all from the architect’s drawing board.

Guimard’s professional practice challenged the notion that the natural place for Art Nouveau styling was the luxurious, hand-crafted and extravagant. Flamboyant designs for entrances to the new and rapidly expanding Paris Métro put his work on hundreds of street corners across the city. Two things followed. Firstly these visually lavish structures rapidly became a familiar part of the background to everyday Parisian life and secondly, the individuality and exclusivity of Guimard’s designs added a unique flavour to the image of glamour and refinement that Paris was presenting to the wider world. 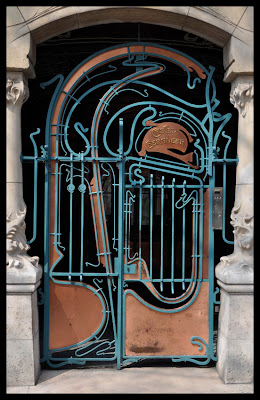