I’ve watched this exhilarating and fascinating film three times in the last week and shall do so again before long. There is no colour, no sound, no actors and no plot. Instead we have much invention and cinematic audacity all served up in dazzling black and white. A group of young and experimental film-makers in 1920s Berlin have taken the intoxication of youth and framed it with the energy and dynamism of modern city life to create an artistic triumph in terms of technique and sensibility. Four young friends, all in employment, escape from the daily routine to spend Sunday flirting and frolicking in the suburban parklands on the edge of the city. Their adventures may be modest in scale but they explore the complications and ambiguities in relationships expressed in the visual language of documentary realism enhanced by stunning extreme close-up photography inspired by narrative cinema.

The city of Berlin is presented as a place of perpetual motion where vectors of vehicle traffic continually intersect, combine and disperse at ever accelerating velocity. Trams, trains, trucks and taxis slice across the screen on diagonal trajectories while the populace swarms in whatever space remains to them. Street frontages, kiosks, advertising columns and overbridges are dressed in Schutzmarken style super-charged graphics in bold shouty fonts – consumer culture Weimar style. Early in the film there’s a mesmerising sequence where two young people slowly and gradually register one another’s presence as they circle around an island in the traffic enclosed by chains of passing vehicles. Eventually they meet and as a couple they depart the security of the island and stroll off through the maelstrom of traffic, unconcerned and miraculously unharmed. This scene is later inverted when their relationship takes a turn for the worse when swimming in a lake and they separate to opposite corners of the screen as the airborne camera observes the growing distance between them.

The great Billy Wilder as screenwriter reveals his beady eye for human frailty. The young men’s boisterous charms cannot conceal a selfish disregard for the feelings of their female companions as they switch their affections as the fancy takes them. The working girls (one is a film extra, the other a sales assistant in a record store) are more reserved and rather emotionally needy – their search for commitment is certain to end in disappointment. There is a third female character. She works as a model and is something of an indolent sensualist, preferring to stay in bed all day in the confines of a stuffy apartment rather than accompany her chubby cab driver partner on a plein-air expedition. The acting is consistently fresh and spontaneous and never lacking conviction. Remarkably so given that they’re all amateurs and in real life follow the occupations they have on screen. The camera gets right in their faces but there’s never an instant when anyone steps out of character. The close-ups are compelling for their emotional intensity and the care with which they are composed. In an extended sequence we see a portrait photographer at work. His subjects are shown in close-up as a gallery of gurning grotesques, each in turn freezing into a single still photographic image.

Six of the young film-makers involved in this project would later enjoy varying degrees of success in Hollywood as directors, writers, producers and photographers. Billy Wilder was the most successful but Edgar Ulmer had the distinction of making what must be the most extraordinary of all film noirs, Detour. Robert Siodmak would also contribute to the film noir genre and Wilder directed one of the greatest of them all, Double Indemnity. 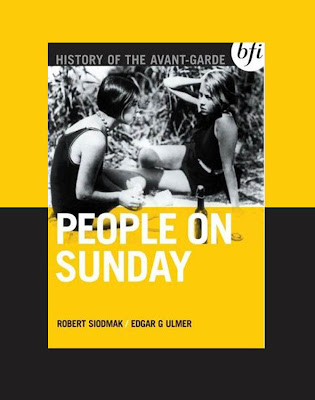