Postcard of the Day No. 37, Ship Hotel, Venice, California 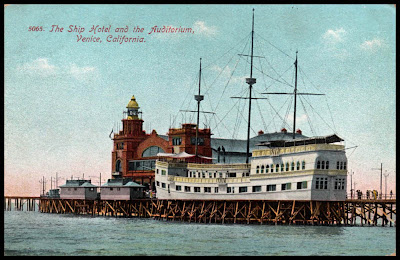 When buildings take on the appearance of things they are not, architectural purists are appalled while the rest of us are silently rejoicing at the absurdity. Property developers are tempted to counterfeit appearances in hopes of maximising commercial opportunity by appealing to the public thirst for novelty. Tobacco baron and cosmopolitan, Abbot Kinney was one such individual. His inspiration was to recreate the splendour of Venice on the Pacific seashore near Santa Monica and he set about doing so with all the entrepreneurial vigour at his command. A Grand Lagoon and several miles of canals were excavated and filled with water from the ocean. Gondolas were imported from Italy and in no time, authentic looking gondoliers were navigating their way beneath the latest in ornamental footbridges. Meanwhile down by the ocean the Ship Hotel opened for business on the pier – just a few years too late for a visit from Mr John Ruskin. It seems that Mr Kinney overestimated the public appetite for Venetian culture as it became apparent that the freak shows and roller coasters at the amusement park were many times more profitable. Displaying the flexibility typical of moguls of commerce, Mr K switched the focus to the construction of bigger and better amusements and the Venetian dream died and Mr K prospered. The “Coney Island of the Pacific” was born. 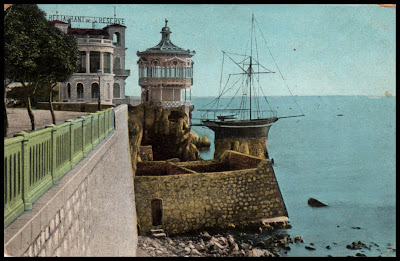 The bonus card shows another maritime impostor. The Restaurant de la Réserve clings to the edge of the Mediterranean Sea at Nice. The conceit was to transform the outermost rocky outcrop into an approximation of an ocean going yacht. The restaurant is still there, as is the rock, but it now serves as the location for a multi-level diving platform. The watercolour below is from a book on the German artist Karl Hubbuch who visited in 1928. Hubbuch was a superb draftsman with a rare talent for wrapping a crisply flowing line around the most complex forms and making it all look easy. 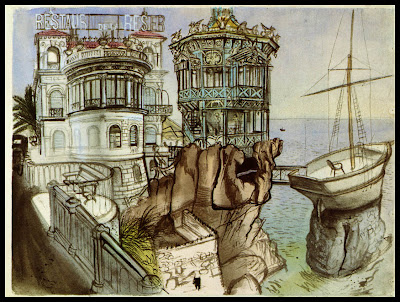