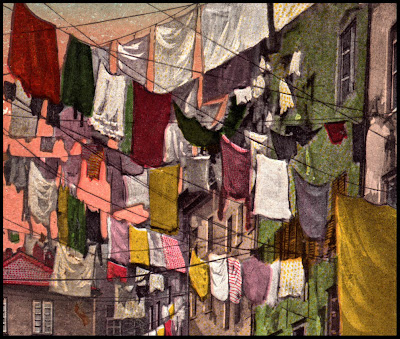 Photographers and postcard producers have long had an eye for the picturesque possibilities of urban clotheslines as a visualisation of inner-city deprivation. By any standards, this is a spectacular example, recorded in the tenement streets of the Italian port city of Genoa. The intersecting panels of multi-coloured fabric suspended high above the street make a fine show. An impressive crowd of locals has gathered to confront the camera only to be transformed into a gallery of grotesques by some absolutely inspired or utterly incompetent retouching. Some of these characters could have stepped out of Goya’s Disasters of War. Others resemble the misanthropic products of the imagination of James Ensor. Their expressions range from a menacing blankness to stunning malevolence. We have to assume that the degree of detail in the original unimproved image was unacceptable to the publisher, leading to the intervention by a photo retoucher whose efforts, intentionally or otherwise, plunge us into a demonic vision of the social underclass poised on the edge of violent revolt. 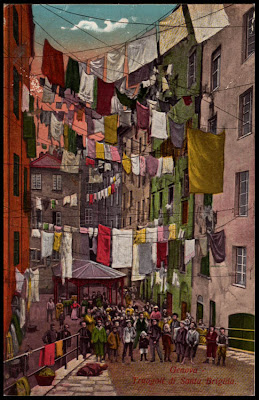