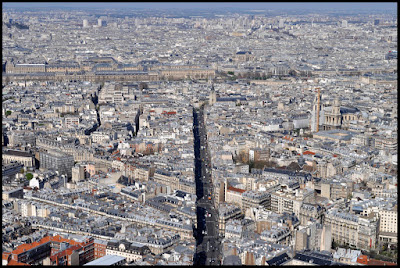 When dreaming up new plans for Paris, Haussmann (described by Richard Cobb as the Alsatian Attila) was especially motivated by an obsessive desire to link all the mainline railway stations with central Paris by means of arrow-straight boulevards of the greatest possible width. The rue de Rennes was devised to connect Gare Montparnasse with the Left Bank and named in recognition of the fact that Montparnasse is the departure point for trains to Brittany. From 1853 the new road forced its way northward, crushing all in its path but would never reach its target. By the late 1860s it reached its fullest extent when it arrived at Boulevard Saint-Germain. The northward extension was blocked by the location of the Institut de France, the guardian of traditional French values, language and culture. Plans were prepared that would have left the Institut marooned on a large traffic island but highly placed opponents of the scheme ensured that approval was denied. City planners were extremely reluctant to concede defeat and the scheme would resurface every decade or so for more than a century until being finally abandoned in 1976. 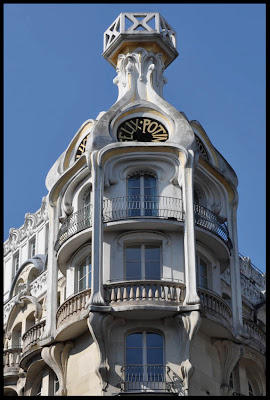 For Richard Cobb, rue de Rennes is the most desolate, inhuman street in Paris and its existence continues to be greatly resented by those who bitterly regret the passing of medieval Paris. It is not blessed with architectural treasures (save one) and the southbound view is dominated by the 55 floors of the Tour Montparnasse from which the photograph at the top was taken. The single redeeming feature is the flamboyant department store at number 140 built in 1904 as part of the Félix Potin grocery empire. Designed by Paul Auscher under the influence of Art Nouveau, the undulating exterior was formed from moulded concrete casts. The moulds could not be reused and much time and expense was consumed in the manufacture of separate moulds for each section. The six storeys are crowned by a vast free-form bell tower embellished with three oculi bearing the name of the founding father. The flirtation with Art Nouveau was short lived and the next Potin store (rue Sébastopol) was built in 1910 in a Beaux-Arts Baroque manner. There is a sombre footnote – in September 1986 when the building was a Tati store, a terrorist bomb left 7 dead and over 60 injured. 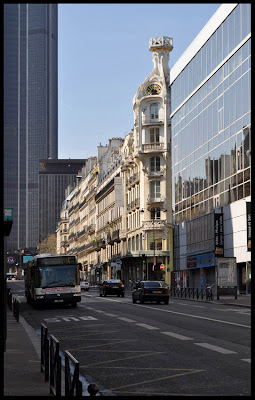