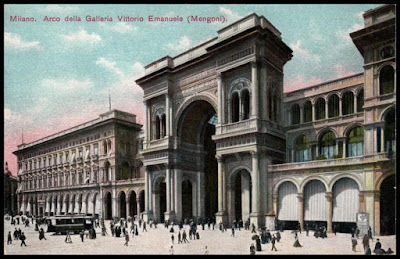 This triumphal arch forms the entrance to the Galleria Vittorio Emanuele in Milan. It stands on the Piazza del Duomo thus uniting the God of Christendom with the God of Commerce. The interior is cruciform in plan with a central octagon. The internal facades are three storeys in height, above them soars an enormous glazed barrel vault complete with central dome. The floor area is entirely covered by a richly decorative scheme of mosaic work and provides an almost absurdly lavish and opulent space in which to shop. The modest shopping arcade as developed in Britain and France is here inflated to the proportions of a grand cathedral and symbolises the need for the newly united Italian nation state to see its sense of self-importance immortalised in architectural form. 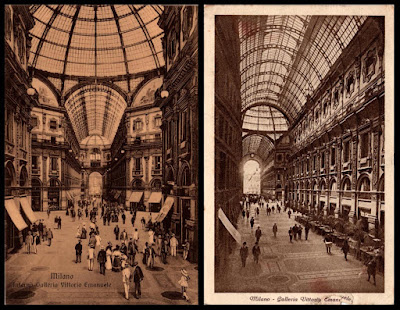 Despite the air of exclusivity, the Galleria is open to all and there seems to be a mismatch between the leisure shirts, shorts and trainers worn by most visitors with the sort of clientele that would be likely to patronise the seriously up-market retailers. Apart from the presence of a McDonald’s, there is very little that would come within the spending power of the average shopper. The shop fronts are intimidatingly polished and perfect, repelling all but the most affluent customer. 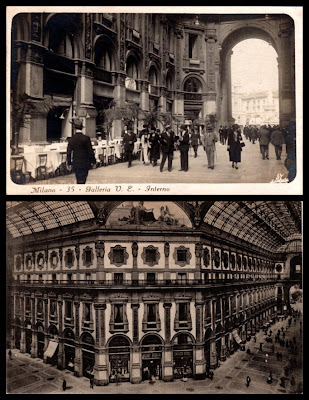 A cultural footnote with which to conclude. The final scene in Michael Dibdin’s Aurelio Zen novel, Cabal, climaxes with the villain of the piece crashing through the glass of the central dome and plummeting to the mosaic floor below. The corpse touches down on the Coat of Arms of the House of Savoy. 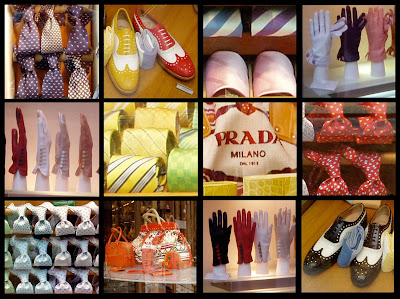 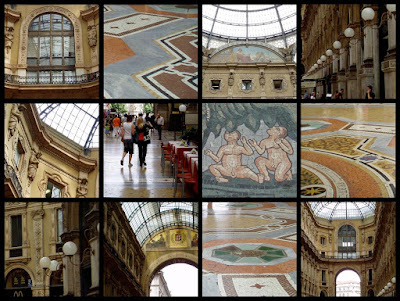