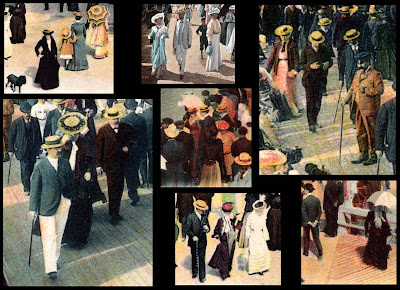 Interest in the art of perambulation, wandering to see and be seen, developed in the 19th century with the emergence of a leisured middle class. Fresh air was credited with a strong association with good health. Atmospheric pollution in urban areas enhanced the appeal of the bracing seaside airs. The fledgling fashion industry created and fed a demand for clothing that was primarily designed for public display. The era is the end of the Belle Époque. The development of railways has brought the Normandy Coast within easy reach of Paris. The vast boulevards of Haussmann’s Paris came well provided with broad pavements ideal for accommodating large numbers of strollers. Promenades and boardwalks performed the same function at the coast. While Parisians exhibit the self-assurance born of a conviction that their superiority in terms of fashion was unchallengeable, in Dieppe the light pastel tones suggest that an air of cool comfort was the priority. 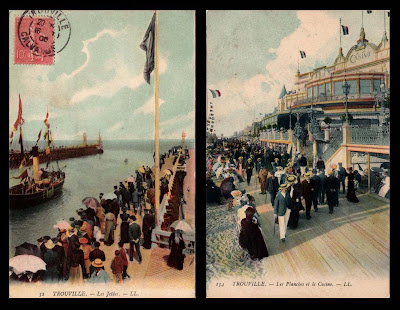 The enlarged details remind us that these images are not as descriptive as at first they appear. A solitary female is accompanied by a dog, another gathers her dress to avoid tripping over, yet another smiles broadly in the direction of the camera. A wayward child holds what looks like a pea-shooter to his lips. One man carries a newspaper, another smokes a cigar, yet another walks with hands clasped behind his back. Male and female, all are wearing hats; canes and parasols are much in evidence. Their images and their shadows have outlived them. We could be looking at film stills from a Visconti period drama where the past is recreated in colour and light. The details can be observed and noted but documentary pretences are erased as all that seemed solid begins to fray at the edges where contours dissolve. Enlarging the products of mechanical reproduction induces myopia as if the images have decayed with the passage of time. 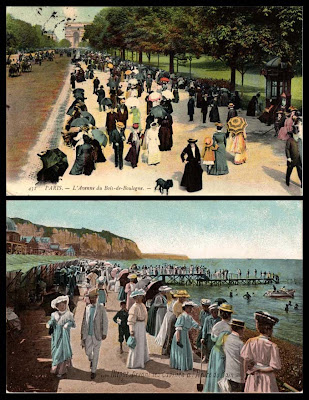