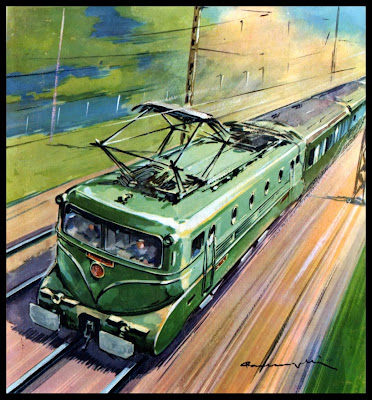 This French National Railways (SNCF) electric locomotive represented the very latest in motive power when this illustration appeared in print. SNCF was very active in setting new standards for speed of travel and a new world record record speed of 331 km. per hour was achieved in 1955 by a similar locomotive. The artwork has been produced in a much modified streamline idiom in which the smoothly airbrushed forms of the past have been replaced by dashing brushwork intended to convey an impression of high velocity. 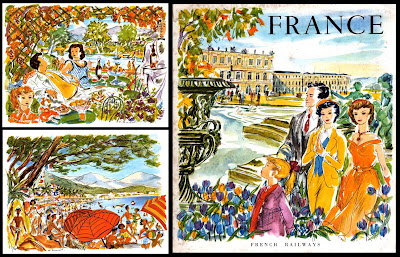 This brochure was published by SNCF in 1956 to attract visitors from Britain. It promotes a highly coloured vision of France as a land of unlimited pleasures via a plain and simple graphic style. The compositional dynamics of the pre-war era have been discarded in favour of illustrations composed of bright colour washes overlaid with scratchy pen and ink work. There’s a lingering air of visual whimsy very characteristic of the period. This was a well timed move on the part of SNCF as British mass tourism was on the very point of abandoning the traditional home-grown (and rain-swept) resorts for more exotic destinations overseas in gentler climes. 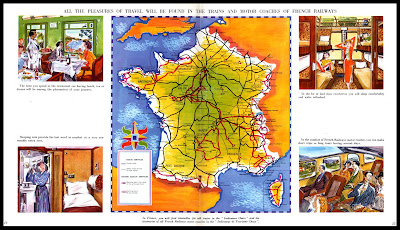 Finally, a photo of another identical locomotive, BB-9004, seen here in a position of rest in the unusual surroundings of the Grand Palais in Paris, taking part in an exhibition to celebrate 70 years of SNCF in December 2007. 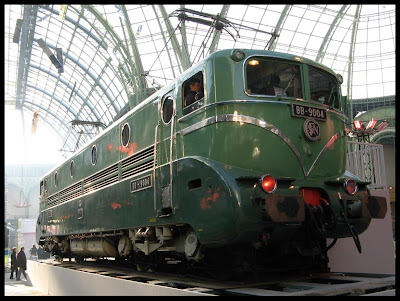