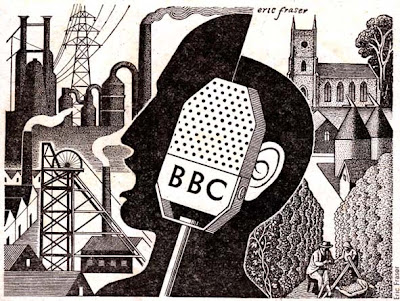 It has been observed that the content of this space has been excessively frivolous and ephemeral of late and that it is high time that some more elevated material be served up. Which brings us to the art and illustration of the great Eric Fraser. A man of true seriousness of purpose, Fraser created a vast body of work over a period of 60 years of commercial and editorial illustration. A model of diligence and dedication to his craft, nobody could accuse him of lacking gravitas. This is a small selection of his late work for Radio Times, the publication with which he was associated for 55 years. The image above shows just how expert he was at uniting disparate elements into a tightly structured composition. Images of urban industry and rural bliss are contrasted to illustrate the unifying influence of the BBC. Line and stipple are deployed with equal precision to enhance the narrative. 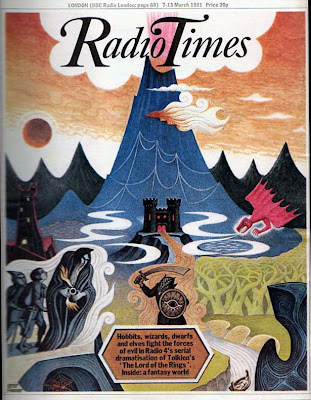 This was almost certainly Fraser’s last cover for Radio Times in March 1981 produced at the age of 79. He rises to the challenge of “Lord of the Rings” with a feast of rhythmic surface agitation and a sombre palette. Fantasy and mythology were always an inspiration to him. Below are 2 more examples from Radio Times that are not seen at their best due to the practice of printing the magazine on uniquely awful newsprint at a time when virtually everything else was on coated paper. Fraser’s skills were especially valued for providing visual form for radio drama. Classical and costume subjects were among his favourites. Also on view here is a passion for the power of profile and masterly manipulation of contrasting linear rhythms in the creation of form. Eric Fraser was one of the very best of a talented generation and there will be more to come in the future. 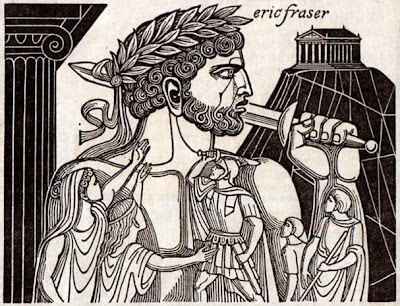 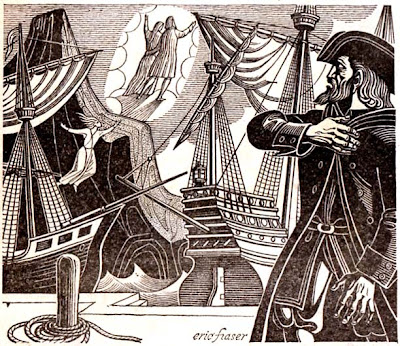 FYI, 'The Lord of the Rings' cover-design was, in fact, Fraser's penultimate RT cover: his last was an Easter cover drawn either the same year or the one following and showed All Soul's Langham Place - the church next to Broadcasting House.

I own the orginal art for the 'Rings' cover. I co-wrote the BBC dramatisation of TLOTR and negotiated to buy the piece even before Fraser had painted it!

Many thanks for this. I must say I greatly envy you owning the original artwork!

I am reminded that I promised more on this subject and have done so today.