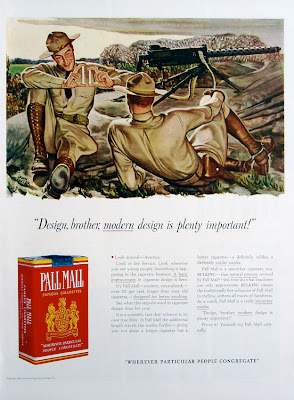 John Falter was a famously productive American illustrator whose prime came in the 1940’s and 1950’s. Between 1943 and 1962 his work regularly appeared on the cover of Saturday Evening Post where his genre scenes of American life in the cities, small towns and suburbia reflected a familiar world to the readership without the sentimentality that Norman Rockwell brought to the scene. For a comprehensive overview of Falter, the Alphabet of Illustrators is the place to visit. 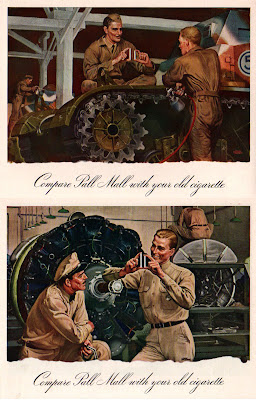 These images come from a wartime advertising campaign for Pall Mall cigarettes for which Falter supplied the illustrations. The basis of the campaign was that Pall Mall represents all that’s best in contemporary cigarette design and manufacture and that, in comparison, rival brands are positively anachronistic. Falter’s brief was to devise a series of images in which servicemen demonstrate the superiority of Pall Mall to their colleagues with a simple visual aid. From the staff car to the firing range, from the aircraft hangar to the coastal battery, the argument raged. It is, of course, an exclusively masculine universe and there lingers a faint but unmistakable homoerotic frisson about the body language on display. An ungenerous observer might wonder how they made time for the rigours of battle. 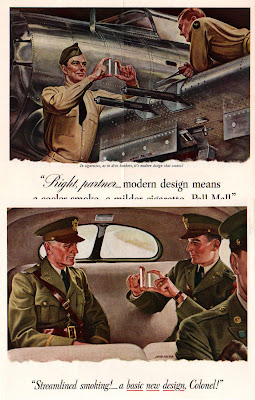 “Design, brother, modern design is plenty important!” It’s a diverting thought that the American fighting man felt passionately about standards in contemporary design and even in the heat of battle would debate the relative merits of Walter Dorwin Teague and Norman Bel Geddes. This was not the copy-writer’s finest moment especially when competitors were successfully enlisting the stars of Hollywood in support of their products and employing cruder but more effective graphic devices in which to showcase their offerings. Ever the professional, Falter brought his full repertoire of skills in handling colour and tone to the task with nothing less than complete conviction. 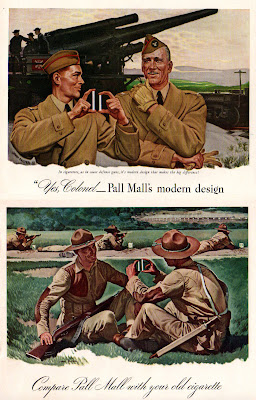