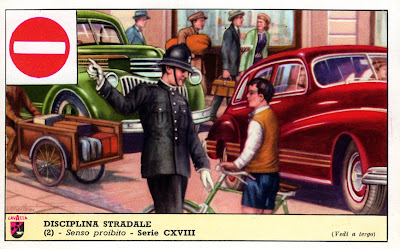 More road safety cards from Lavazza in which young boys find themselves in trouble with the forces of law and order. In our first example a young man has passed a No Entry sign on his bike and a friendly constable with just a hint of effeminacy about him, gently points out the error of his ways. An air of sweet reason prevails. Only the ghostly presence of Marilyn Monroe in the red car with the implausible perspective and the sinister orange package carried in the background strike an ominous note. Our second image is altogether more disconcerting. 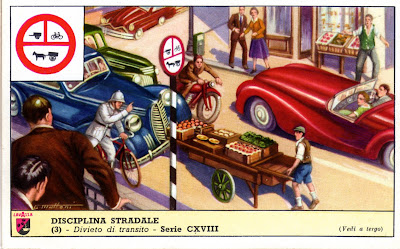 The changes of scale from the foreground figures at lower left set up a vortex of movement that bears down relentlessly upon the diminutive cap-wearing schoolboy attempting to manoeuvre his unwieldy handcart laden with fruit and vegetables against all the oncoming traffic. A colonial style police officer, though dwarfed by the vast bulk of the blue car alongside him, employs the full weight of his authority to stop the unfortunate child in his tracks. But is it all too late? Can the driver of the green car somehow reduce the width of his vehicle so that he can safely follow the motorcycle through what appears to be an impossibly small space? Has the driver of the red sports car allowed his attention to wander with potentially lethal consequences? Are the pedestrians on the opposite pavement correct to assume that catastrophe beckons? Was there ever any possibility that the wretched child could successfully push such a badly designed conveyance? Should his employer be answerable to the law for dispatching him on his task without adequate training and support?
Posted by Phil Beard at Monday, July 16, 2007