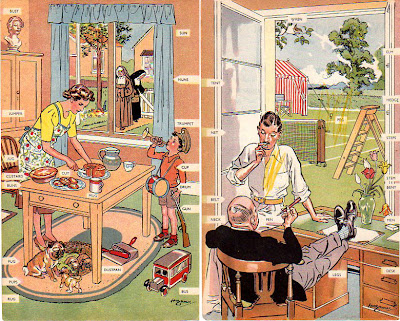 Brock was a prolific and very competent illustrator of children’s books in the course of a long career. The University of Reading holds about 2,000 items – click here for more information. The task of illustrating a book on Early Reading was a relatively humble one for Brock but nevertheless he put a genuine effort into engaging the interest of his young readers. The normal format for reading primers was dry and pedantic so Brock’s cheerfully boisterous drawings make a refreshing change. A sly sense of humour can be detected, for example in the contrast between the industrious housewife and the idle males lounging with their feet up. The approach of the nuns on the garden path bringing their message of self denial to suburbia is a mischievous touch. 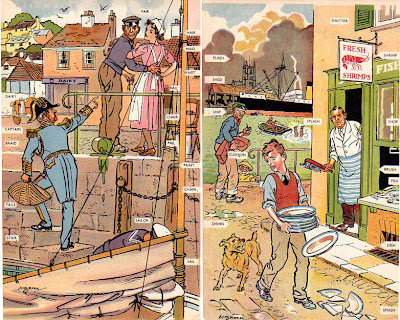 It was unusual for Brock to be describing the contemporary scene. Most of his work was classic Victorian and Edwardian fiction. Note the comic opera admiral of the fleet (Brock did a lot of work for the D’Oyley Carte company) strenuously imposing moral discipline on a courting couple whose dalliance has led to the spilling of paint. Best of all is the disembodied hand that repels the impudent paupers while an expired rat in the foreground completes the picture. Did Brock secretly identify with the victims of social inequality? His own background was prosperous and privileged but in his work he takes care not to strip the poor of their dignity. Brock employs his robust style of drawing to great effect being especially proficient in the application of supple and subtle contours. 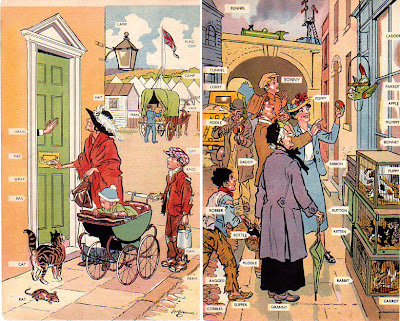 Words float over the images, drawing our eye to the surface of the page and cancelling the pictorial space. They appear as signifiers from another language and we scan them for hidden meaning beyond mere definition. The area where word and image collide has often been fertile territory for artists like Marcel Broodthaers who browsed through many a didactic volume in search of inspiration.
Posted by Phil Beard at Tuesday, July 17, 2007

These illustrations are so different to those he chose for illustrating Robin Hood (Gilbert). In fact I have never seen RH illustrated so darkly in view of the fact that British legend is usually "springtime". These illustrations have a more European flavour.
Great page
Thanks

Hi, am researching a possible link between H.M.Brock and Leonard Russell, onetime editor of the Sunday Times. Were they colleagues, was Brock a contributor to the Times? I have a book dedicated to Brock from Russell, wondering if it is HM Brock?? Thanks, nevillede@yahoo.co.uk

Hi Anonymous. I'm trying to authenticate a kinship link between HM Brock and Barbara Noel Smith. Does this match any of your research?

Sorry - can't help with this.