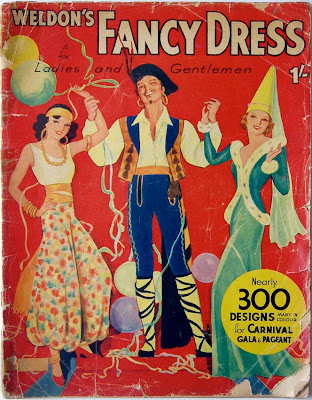 First, a short history lesson. The concept of “designer clothing” has always been intriguing. Attaching labels of ever greater prominence to items of little intrinsic merit was the first step in persuading consumers to transform themselves into mobile advertising at their own expense. To then charge a premium for the privilege was even better business. This marketing strategy seemed to enter the mainstream in the late Seventies since when it has met with little in the way of consumer resistance. 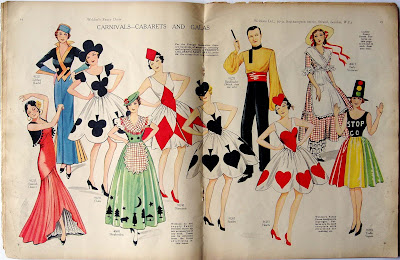 In the years before World War 2 advertisers and brand managers pioneered this concept by enticing consumers into fancy dress so they could party, dressed up as their favourite brand character. These pages come from Weldon’s Fancy Dress and feature many other more traditional historical and fictional characters to tempt their audience but the real fun is to be found in the contemporary costumes. Not only the brand characters but also the Traffic Signal, the Golf Bag and Slave Girl. 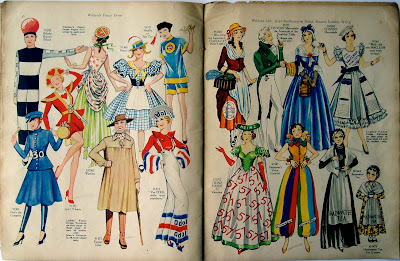 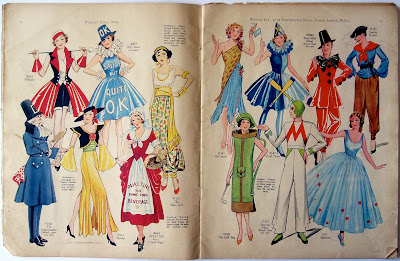 Opportunities for men were limited to either the sinister Futurism of Marconi Man or the constipated foppery of the Aristocrat of Marmalades. But the girls were spoilt for choice with the assertive jauntiness of the Odol Girl, the pastel toned femininity of Macleans Toothpaste and the bucolic Ovaltine Girl (for a Good Night) all competing for adoption. Plus, a once in a lifetime chance to go partying with a cucumber on the head, all in the name of Heinz and its 57 varieties. The manufacturers paid for advertising space to reinforce their brand values but also to market patterns to the public to help with making their costumes. It all seems like a throwback to a kinder, gentler era of marketing but in there was the germ of an idea which in the future would earn squillions. 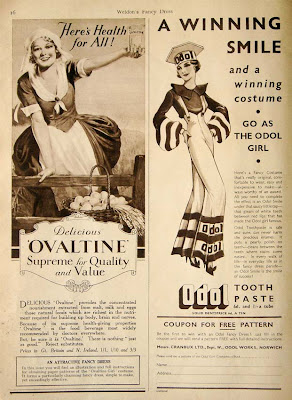 I am very impressed!I found a very old catalogue, the paper is really old, and I was fixing all the remaining sheets in a file, but I couldn't the date and I decided to look in google for"weldon's fancy dress,and I found this page. I am really happy and surprised!I wanted the year, if you please!
Thank you
Bernardette