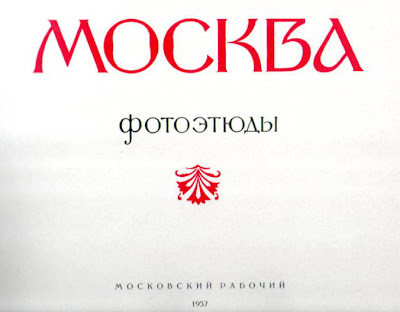 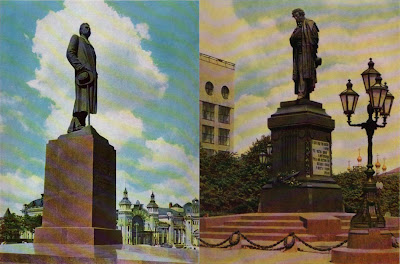 It’s fascinating to discover that many of the artistic avant-garde heroes and heroines of pre-Revolutionary Constructivism survived and went on to work for the state deep into the Stalinist era. El and S Lissitsky and A Rodchenko and V Stepanova consolidated their experimental graphic techniques in a series of propaganda publications in praise of Soviet achievements throughout the Twenties and Thirties. It took the cataclysm of the Second World War to finally sever all links between Modernism and the Soviet state. The post war visual language was profoundly conservative, calculated to reflect the power of the centralised state, and projected a sense of monumentalism and stability appropriate to a regime which placed control over all other values. 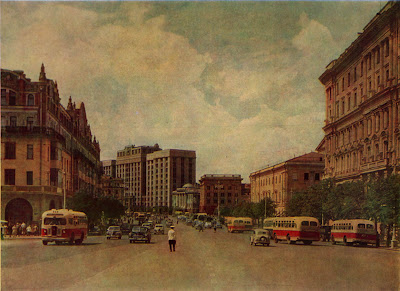 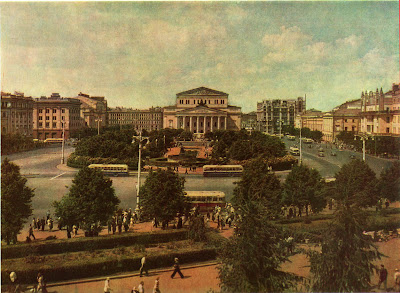 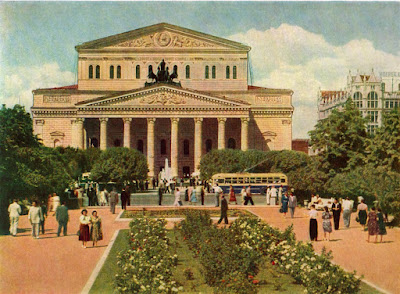 Moscow under Reconstruction was published in 1938 in a wonderfully elaborate production designed by Alexander Rodchenko and Varvara Stepanova in which the dynamic quality of urban life were conveyed via a sequence of photographic panoramas, montages, cutaways, fold-outs, and keyhole flaps which open to reveal details of following pages. The images on display here come from 1957, nearly twenty years and one world war later. This book, a simple large format picture book of Moscow, has minimal captions and no other text. The city portrayed is a sober, orderly and visually dull conurbation bathed in pallid sunshine. Massive, ponderous buildings dwarf the thinly spread human population and vast boulevards accommodate little more than a trickle of traffic. All is clean, free of litter and clutter and seems a world away from the frantic motion and dynamic energy of the city as visualised by Rodchenko and Stepanova. 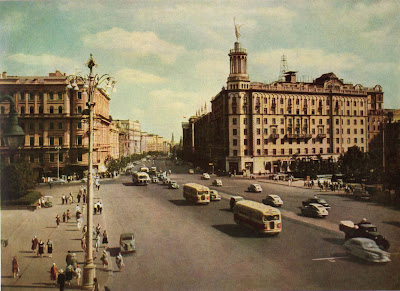 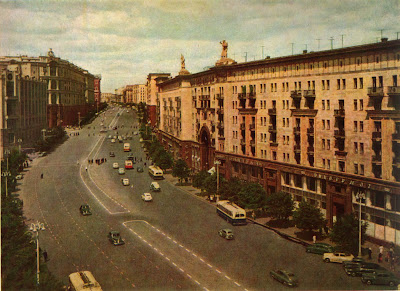 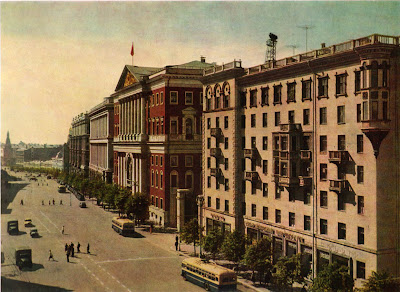 The limitations of the colour process and printing contribute to the lack of definition and naturalism but they cannot be blamed for the pictorial conception which seems designed to convey an image of an ageless and eternal civilisation destined to endure into a more or less indefinite future. The graphic devices of 1938 have been abandoned in favour of a basic and simple presentation that arises more out of an absence of design than out of positive design decisions. A new conservatism predominates. 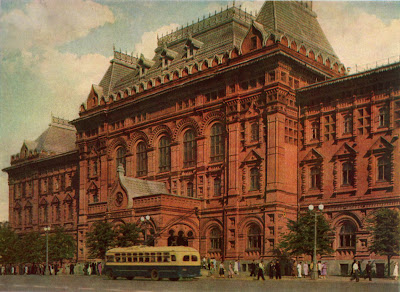 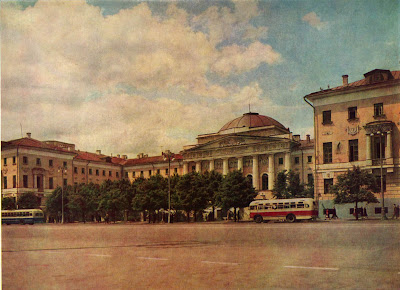 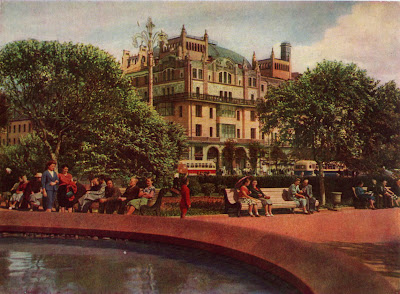 Half a century has passed and utopian visions of architectural imperialism are very much out of favour. Documentary photography often acquires additional significance as time passes but these images seem to travel in the opposite direction and take on the appearance of a world that may never have existed in a real sense. The wide open spaces and deep perspectives encourage the imagination to seek explanations for the urban anomalies. After a while they assume a theatrical air, at least one step removed from quotidian reality. Human traces are reduced to unfocused smudges; they seem to be in the city but not of the city. This is a city totally free of commercial branding. The power of the state resides in the monumental architecture and the rooftop sculptures that pierce the skyline. To find a city like this today would require a trip to North Korea. 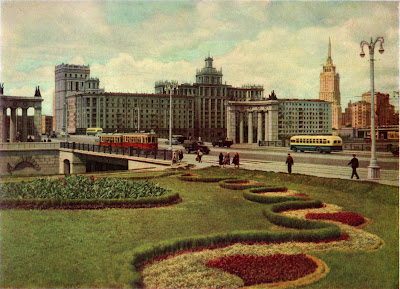 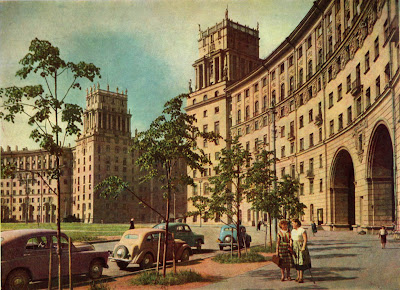 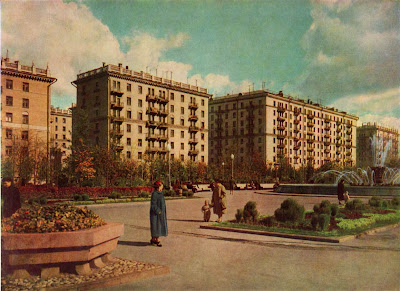 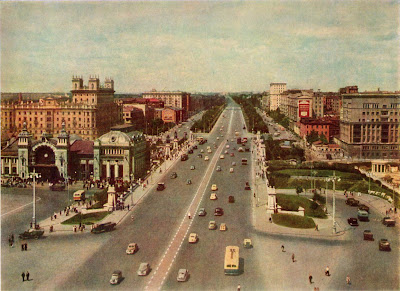 Posted by Phil Beard at Thursday, November 29, 2007 No comments: 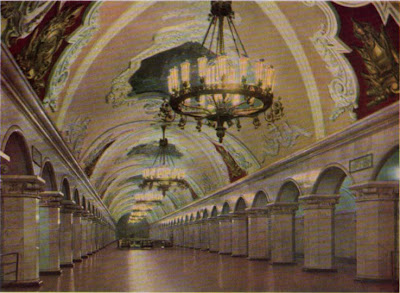 The Moscow Metro is justly famous for its architectural opulence and makes a brief appearance in the 1957 book. Curiously the late 1950’s was the period when this architectural splendour fell out of fashion and was replaced by a new austerity in design terms. The images here are not very clear but give some flavour of these remarkable interiors inhabited by a rather unsettling cast of petrified figures. There is a splendid selection of contemporary photographs by Bee Flowers available by clicking here. What makes them even more attractive is the introduction to the site – “It's not an art project. No vision, no interpretations, no artistic contributions or ambiguities.” 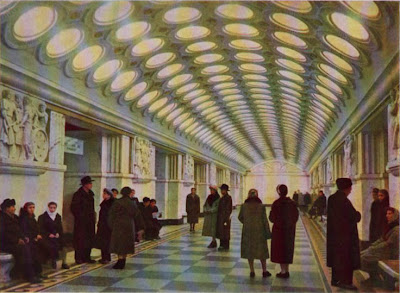 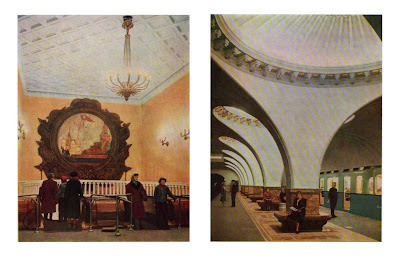 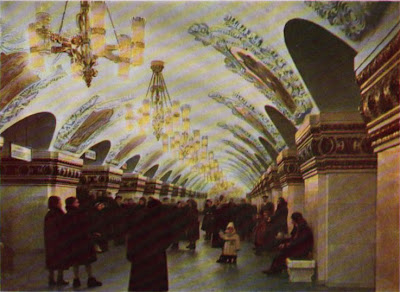 Posted by Phil Beard at Wednesday, November 07, 2007 No comments: 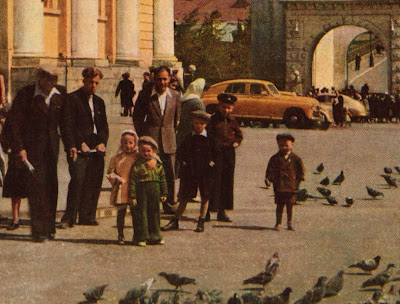 This is a tribute to the anonymous citizens of Moscow whose images were captured by the all-seeing eye of the state some 50 years ago and reproduced in a lavish picture book designed to celebrate the architectural splendour of the Soviet capital and 40 years of a socialist utopia. These photographs portray a remarkably passive and sober citizenry whose demeanour at all times is orderly and dignified. No slouching or sprawling to be seen and no eating or drinking in public, perfect decorum is maintained. Social interaction is minimal and restrained and there is a general lack of purpose in gesture and movement. Such strangely robotic ensembles inevitably suggest a highly controlled society in which undemonstrative public behaviour is the social norm. Individual assertions of identity in terms of clothing or conduct would be unwelcome. Consumer expectations have been seriously managed down. 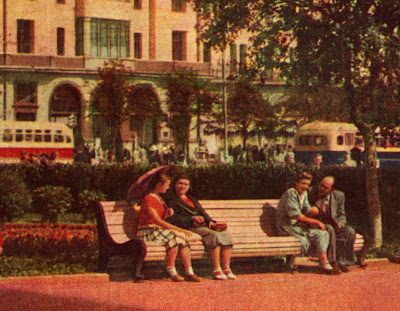 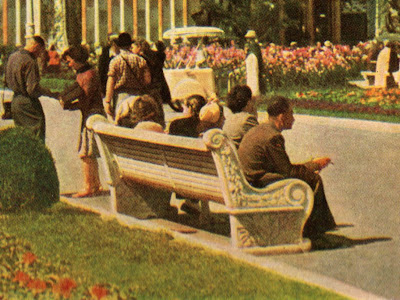 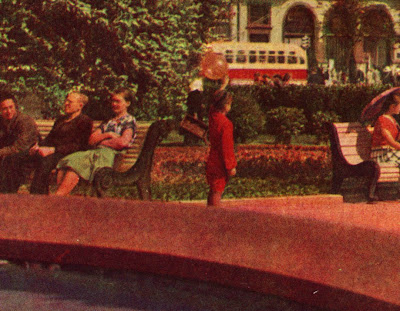 Despite being printed on heavy coated paper, the coarseness of photographic reproduction eliminates detail and contributes toward the imposition of visual conformity. A surveillance state has created a wary population, acutely sensitive to the likelihood of being observed by an unseen authority and there are even a few instances where individuals can be seen staring intently at an unsuspecting human target. Small children carrying red balloons appear but conduct themselves with the same bearing as their parents. With the unique exception of an individual in naval uniform who strides with purpose, everyone else appears to move at the same pace. It’s not impossible to imagine that all the figures were elaborately posed as in a cinematic crowd scene in which case boredom and repetition may have played a part in the absence of expressiveness. 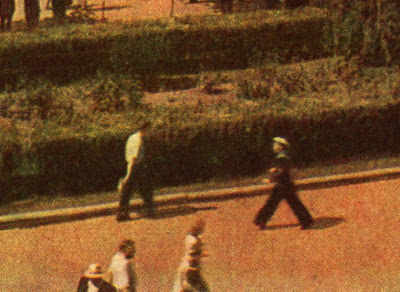 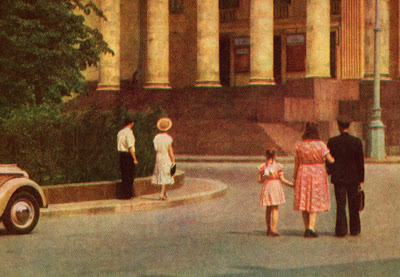 This selection of details cropped out of much larger originals contains some fascinating material. There are queues that shuffle along with patient resignation and weary commuter waiting for metro trains. Several groups look very much as if they had been posed for a family snapshot. Others resemble groups of strangers who, finding themselves seated on the same park bench, make modest attempts to converse with each other. More enigmatic groups, couples or threesomes, each inhabiting a bubble of their own, co-exist within the same image and have the potential to generate any number of narratives for an imaginative observer. There’s something for the transport buff including trolleybuses and trams of the same design as those photographed by Rodchenko thirty years previously. 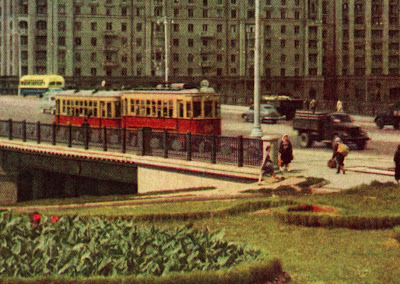 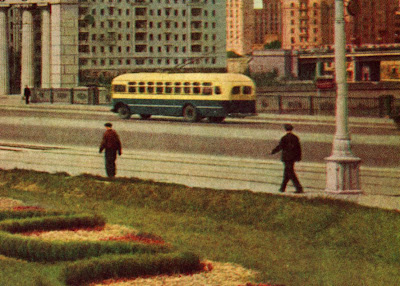 The very youngest of these Muscovites must by now be in their mid-fifties and most will no longer be alive. By appearing in this book, willingly or otherwise, they served the interests of their state. Whether the state, in turn, served their interests is another matter. We cannot rescue them from anonymity but we can at least acknowledge their existence and participation in this photographic portrait of their capital city. We will return to this book in future postings. 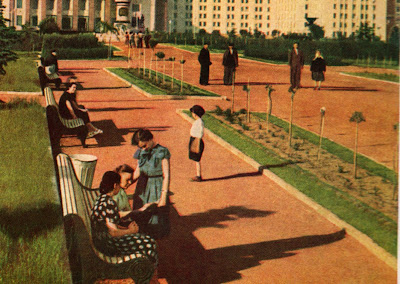