At Home With Magritte 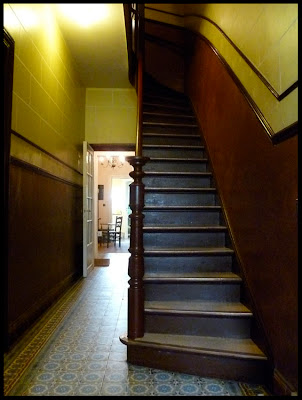 This is the staircase that would have confronted René Magritte whenever he entered his Brussels home at 135, rue Esseghem. The Magrittes occupied the ground level rooms and the need to climb the staircase would have been confined to the infrequent occasions when they had cause to visit the attic where they rented storage space. Magritte and his wife, Georgette lived in this house in the unremarkable dormitory suburb of Jette from 1930 to 1954. After 3 years in Paris, navigating, not too successfully, the Surrealist snake-pit presided over by André Breton, it must have been a relief to the Magrittes to sink into the relative anonymity of bourgeois Brussels. Magritte was unmoved by the bohemian charms of a Parisian atelier and preferred to paint in the privacy of his own home. What we are offered here is a curated re-presentation of the Magritte home assembled some 45 years after he had moved out of it. A living room, a tiny bedroom, a studio and a kitchen – all contrived like a set-design to convey an impression of the stuffy middle class conformist lifestyle that the Magrittes preferred. There is always something odd about prowling around the homes of the famous but long departed. It’s embarrassing to find oneself speculating as to whether those bracers were really responsible for holding Magritte’s trousers up, was that his egg-timer, were those his toe-nail clippers? Authenticity and provenance are all-important in the art world and we struggle in their absence. The two upper floors display a few original artworks and a mass of photographs and memorabilia. The rooms in the apartment give a sense of the claustrophobic conditions in which Magritte lived, worked and entertained. The question that preoccupies so many commentators as to how to resolve the contradiction between the suburban lifestyle and the subversive imagery really seems quite pointless. The contradiction is what defines the artist as much as the pedestrian paint handling by which his vision was realised. Magritte had a parallel career as an unenthusiastic commercial artist and the uncomplicated technique that worked in advertising seemed to work equally well when applied to the bizarre or enigmatic subject matter in his personal artwork. As for painting at the easel while wearing a suit, what better way to express contempt for the absurd Romantic caricature of the picturesquely dishevelled artist immersed in the frantic expression of his genius. 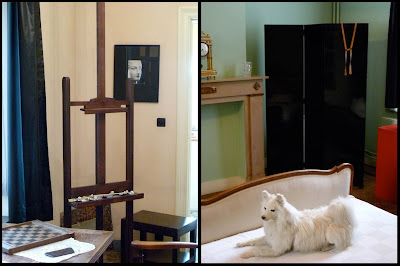 Looking back to the 1960s and those hazy golden days of youth in the ivy-clad quadrangles of the Lycée de Métroland, it was the paintings of Dali and Magritte that captured this schoolboy’s imagination. Cultivating an interest in Surrealism supplied some immunity from the prevailing ethos of militarism exemplified in the strutting and preening of uniformed buffoons, the tin soldiers, cardboard sailors and plastic airmen – decorated heroes of the school Cadet Corps. The last laugh was theirs as they graduated to become merchant bankers and captains of industry. Surrealism as a vital force had by this time expired and was collapsing into the arms of art historians for ritual embalming. The major players were still active – Dali was pioneering the celebrity lifestyle and Magritte, in response to demand from the US, was as productive as ever right up to his death in 1967. In his homeland, the journey to national treasure status had already begun in 1966 when the Belgian airline, Sabena co-opted Magritte’s sky-bird for its publicity. The process of assimilation has gathered pace over the decades up to 2009 when the Musée Magritte opened over three floors in a dedicated wing of the Musées Royaux des Beaux-Arts de Belgique at Place Royale. The place of the museum on the tourist trail demonstrates the extent to which Magritte is now a vital element in Belgium’s visitor economy – a curious fate for an enigmatic and contrarian personality. 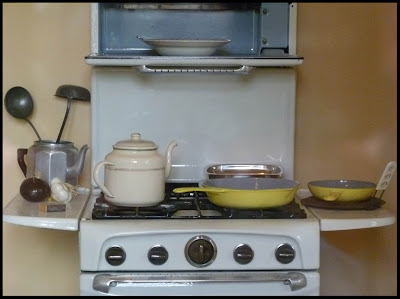 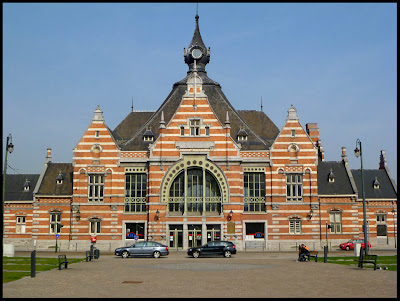 One of the great unsung architectural treasures in the city of Brussels is the grandiose railway station in the northern suburb of Schaerbeek. The buildings were conceived on a monumental scale in anticipation of passenger traffic that never materialised. Thirteen platforms, ten sales positions in the ticket office and a truly grand building were all completed by 1913 to a design by Franz Seulen. A massive central bay is flanked by two smaller bays, topped with a flared mansard roof surmounted by a bulbous spire inset with oculi. Alongside is another large tower that was first to be constructed. The exotic air is only intensified by the alternating courses of red brick and cream stonework. Traditional Flemish styles appear to be the starting point in design terms and there is, for the period, a notable absence of Beaux-Arts or Neo-Classical detail. 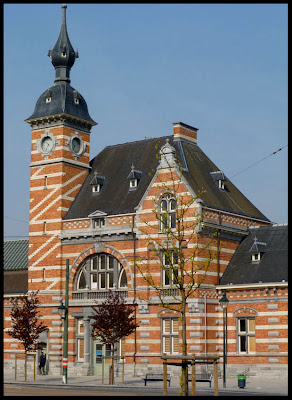 The booking hall interior is restrained with varnished wooden ticket office and a tiled floor with simple geometric decoration. The internal space is cavernous and so little used that in the interests of economy it only opens to the public on weekday mornings. It would seem that the municipal planners were seized by inordinate ambition and commissioned a station on a scale that was totally disproportionate, bequeathing an enormous headache to future generations in terms of conservation. Meanwhile the thirteen platforms and ten ticket positions slumber on, patiently awaiting the phantom travellers of Schaerbeek. 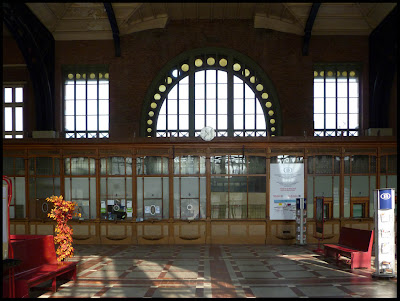 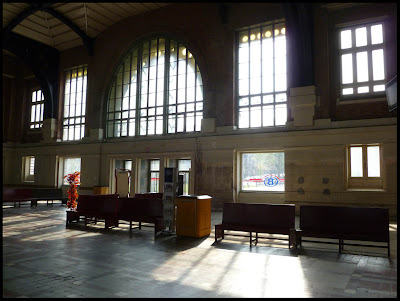 Barnett Freedman and the GPO 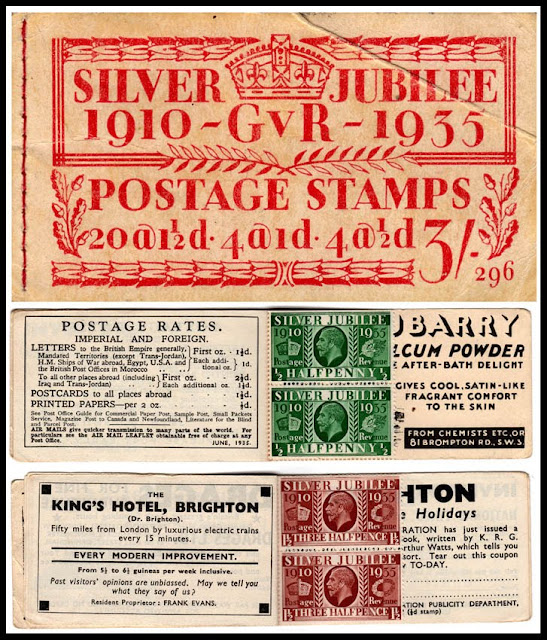 One of the few collecting vices that have not tempted me is the collection of postage stamps. The graphic quality of stamps often display great merit but the general flim-flam that surrounds the activity of stamp collecting could hardly be more off-putting. But I found these the other day and realised they are the work of Barnett Freedman, designed for a royal event in 1935 and apparently rather controversial in their day. The rich and subtle tonal contrasts that Freedman deployed were unappreciated by many commentators to whose eyes they appeared unnecessarily brash and crude. Freedman had a reputation as a perfectionist and was unsparing in his efforts to get everything right and this unenthusiastic reception must have been a disappointment. 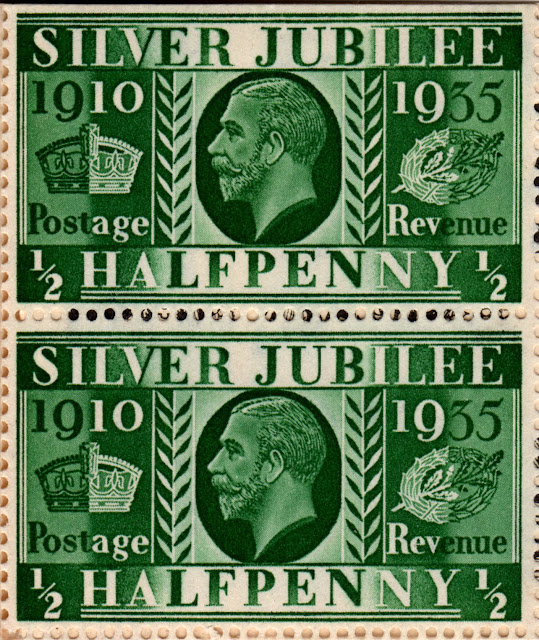 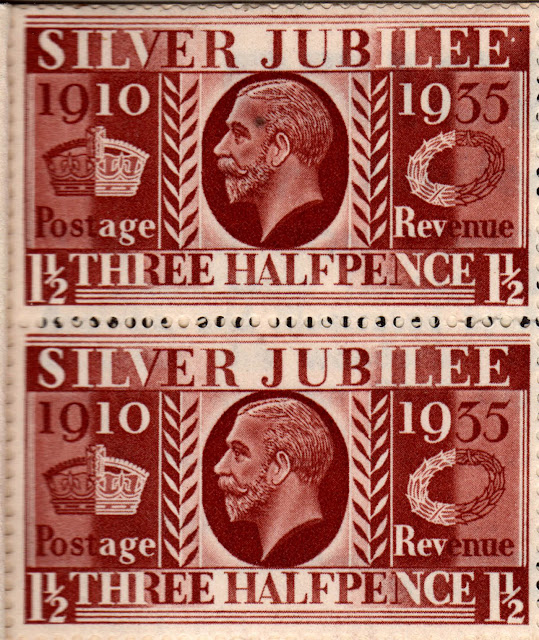 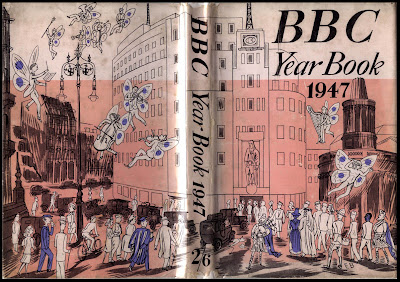 When Edward Bawden was invited to design a cover for the BBC Yearbook he populated Portland Place with an orchestra of winged musicians gently descending from the airwaves above bringing joy and enlightenment to the masses gathered below, neatly encapsulating the mission of the BBC as it existed in 1947. Bawden’s slender pen line reduced the monolithic presence of Broadcasting House to a skeletal vestige. The postcard supplies a more substantial vision of the BBC’s great flagship towering over Upper Regent Street complete with Eric Gill sculptures. The building was completed in 1932, only 10 years after the first regular broadcasts and expressed the massive sense of self-confidence typical of the early years of radio. George Val Myer was the architect and brought considerable experience of designing for business and commerce to the project. The Radio Times cover is from 1982 and celebrates 60 years of radio by wittily transforming Broadcasting House into a facsimile of a pre-war Bakelite receiver on the left and a contemporary mixing deck on the right, subtly airbrushed by an unidentified artist. 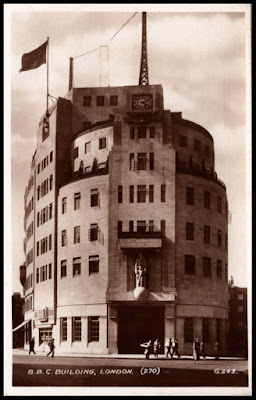 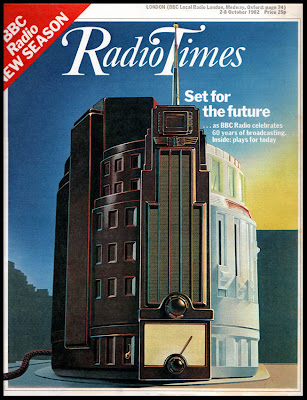 I have always been a great admirer of Barnett Freedman’s graphic work. He developed a very individual approach to the art of the poster and book jacket and he possessed a rare subtlety of touch that enabled him to employ the art of auto-lithography to maximum advantage. Lettering was a passion that inspired highly decorative hand-drawn fonts of his own invention. Much influenced by the teaching of Paul Nash at the Royal College of Art and a later association with the Curwen Press, he had the confidence and ability to tackle a remarkably wide range of graphic assignments from Private Press book illustrations to postage stamps, from biscuit wrappers to London Transport posters. He had the instincts of a master craftsman and was famous for involving himself at every stage of the lithographic process. Unlike most of his contemporaries at Curwen, he drew his own poster designs directly on to the stone. Cheerfully switching between fine art and commercial art, he made no great distinctions between the two activities, being much more concerned to distinguish the good from the bad. Many of his book jacket designs were commissioned by Faber and Faber and must have made fabulous displays in an era when most book buyers couldn’t wait to discard the wrappers in the interests of a homogenous bookshelf. These few examples come from sundry Penrose Annuals and the pages of Signature. The Barnett Freedman Archive can be found at Manchester Metropolitan University. 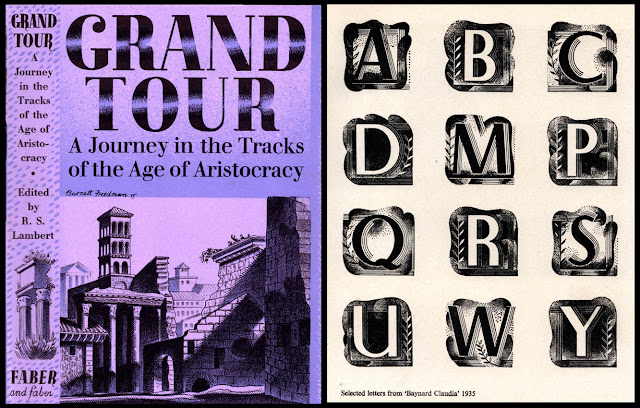 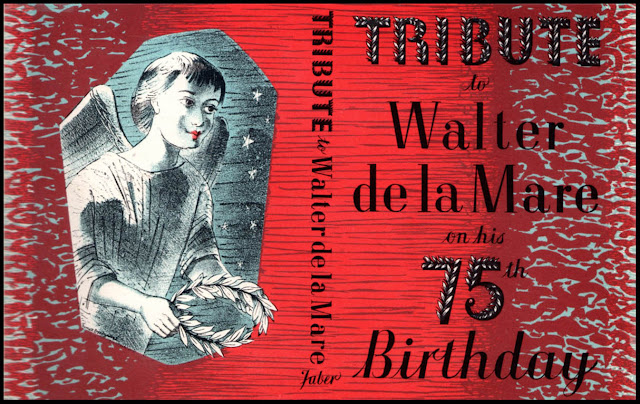 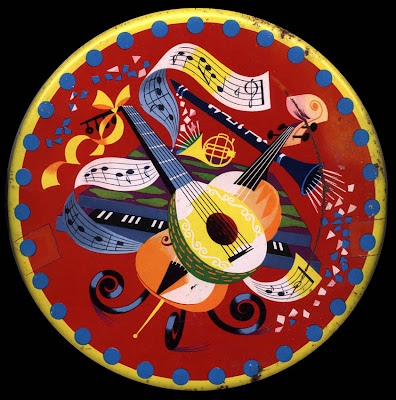 Collecting vintage printed tins is an expensive business but these two examples are not among the most sought after despite their decorative character. Each is typical of the decade to which it belongs. The musical still-life is brought to life by an oft-repeated mid-century pictorial device – the swirl of the ticker tape with musical notation. There are ribbons and bows, and crisply contoured instruments making their own music with unstoppable energy. The Carnival Assortment tin is home to a harlequin and partner, stock characters in the repertoire of poster designers of the inter-war decades. French poster artist, Jean d’Ylen introduced these characters in the service of Mackintosh’s in a 1926 poster. A pleasing touch here is the inclusion of a tin within a tin held aloft by the harlequin as he tempts his feminine muse with the delights of Carnival Assortment. 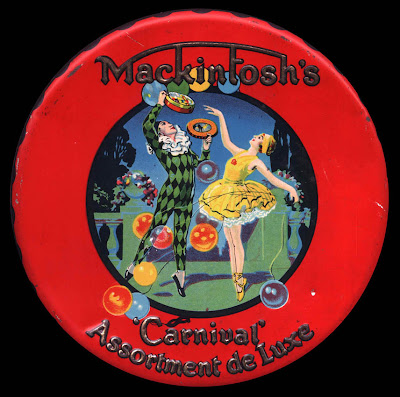