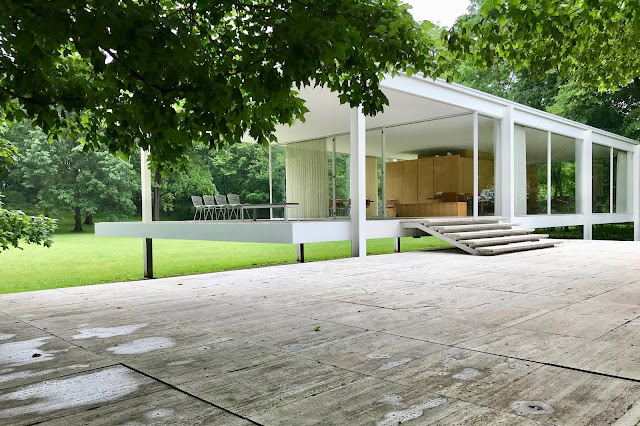 The first 30 miles of the journey from Chicago to Plano, location of the Farnsworth House, is spent escaping the gravitational pull of the city and its suburbs. For the next 25 miles the route crosses the flattest of farmlands along arrow-straight roads, punctuated every few miles by a cluster of agricultural buildings including a large barn, feed store, gasoline tank and a farmstead with a stand of mature trees to offer some shelter from the elements. The vernacular styles are recognisably part of the same family that frequently featured in the inter-war paintings of American Regionalists and Precisionists from Thomas Hart Benton and Grant Wood to Charles Sheeler and George Ault. The house we are visiting has more in common with the latter than the former. 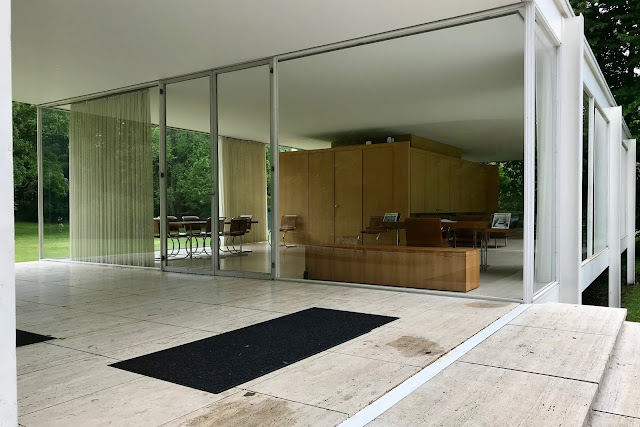 After a week long exposure to the work of Frank Lloyd Wright, the Farnsworth comes as a blast of cold air. No place here for Wright’s spatial dramas, warm colour palette or decorative flourishes – just a bracing, austere, single-storey rectilinear form that hovers in a woodland setting close to the Fox River. Basically it’s a glass-walled, slab-topped box with an extended canopied porch, supported about five feet above the ground by 8 white-painted I-beams. Another slab, offset and closer to the ground, serves as a transition between the house and its surroundings with connections being made via two flights of slab-formed steps. Inside is a single undivided living space with a central timber panelled core that conceals basic services such as heating, sanitation and minimal storage. A fireplace is set into one side of the core – on the other side is a kitchen area. 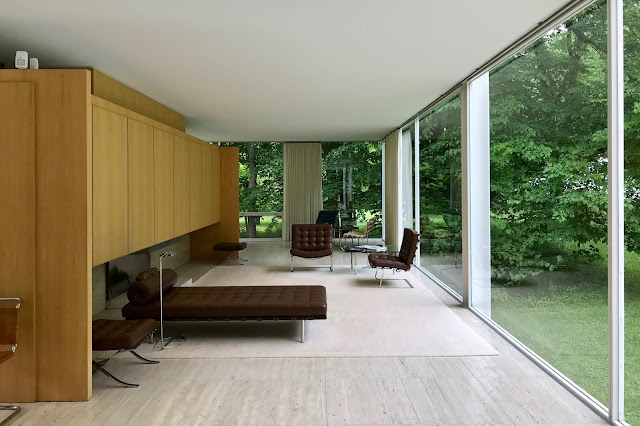 The house was first conceived as a weekend retreat at a dinner party in 1945 when Dr. Edith Farnsworth made the acquaintance of Bauhaus exile, Ludwig Mies van der Rohe. Plans were developed over the next two years and placed on hold while Edith waited for the death of an elderly and ailing relative from whom she would inherit the money to finance the build. Construction took place in 1950-51 but before completion, architect and client were embroiled in a legal dogfight over the issue of unforeseen cost inflation. When Edith reached the point of refusing to pay any further costs, Mies sued for unpaid construction invoices and professional fees. Edith’s countersuit demanded repayment of all the sums she had already paid in excess of the original estimate on the basis that Mies had fraudulently misrepresented his abilities as an architect. The court decided in favour of Mies who withdrew from the project, ended all contact with Dr. Farnsworth (with whom he had had a cordial friendship) and never saw the completed house – the task of completion being left to a colleague. There’s a comprehensive and admirably level-headed account of all this to be found at arch daily. According to Wikipedia, there’s a plan to make a movie out of these fraught events with Maggie Gyllenhaal and Ralph Fiennes in the leading roles. Without a lot of fictional embellishment, it sounds like an unlikely pretext for a romantic drama. A stronger subject for a Mies-based drama might be the Villa Tugendhat in Brno. 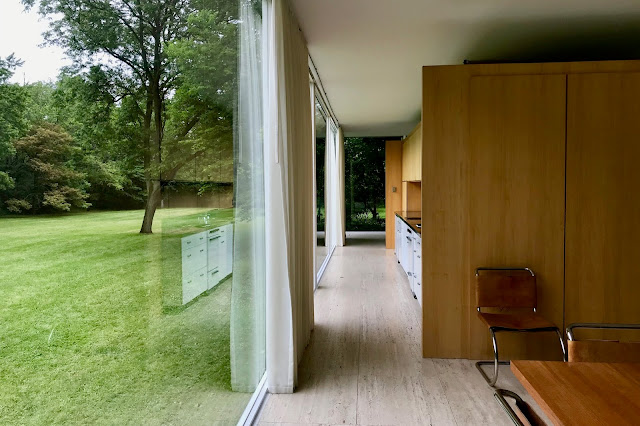 The sheer force of Mies’s obsessive quest for formal purity was never going to produce the kind of comfort and convenience that a client would have expected in a weekend retreat. Uncluttered spaces and clean, exposed lines mattered far more than the provision of internal storage or personal privacy. When the doctor expressed her reluctance to place a much needed pedal-bin in the kitchen for fear of incurring the displeasure of her architect, she was describing a relationship in which the architect outranks the client, whose role is reduced to that of humble facilitator. Nothing could be allowed to get in the way of Mies’s perfectionist instincts – to do otherwise would be to deny posterity the opportunity to appreciate a masterly demonstration of a reductivist aesthetic. The good doctor’s compensation was the undisputed ownership of a widely acknowledged architectural masterpiece. The cultural capital embodied within must have carried her through many a dinner party. 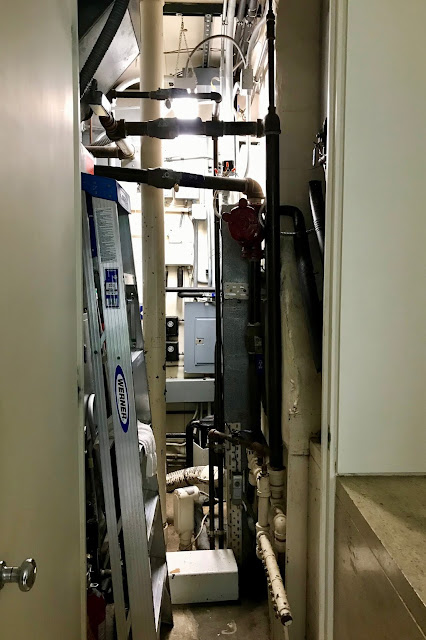 Mies was insistent that his design priority was to link the house with its natural environment and this aspect is the one positive that almost everyone takes away. The glazing wrap offers an abundance of exquisitely framed views of greensward and foliage on all sides. Many visitors find the absence of creature comforts unforgiveable – the idea that the eminent but inflexible architect should be given a pass in these matters gets little support. This I understand, but I might be a little more generous with the pass. The way that the house and furnishings resolve themselves into a sequence of beautifully composed and layered compositions is a source of such visual delight that I can overlook the issues that others can’t. It may be wrong of me but I can’t help admiring the effrontery of the architect in imposing his vision with complete indifference to the wishes of his client. Something I would normally deplore – only the intensity and severity of vision and the powerful clarity of expression persuades me otherwise. 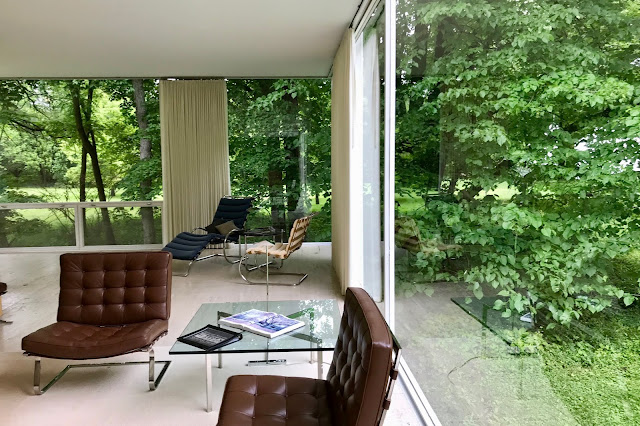 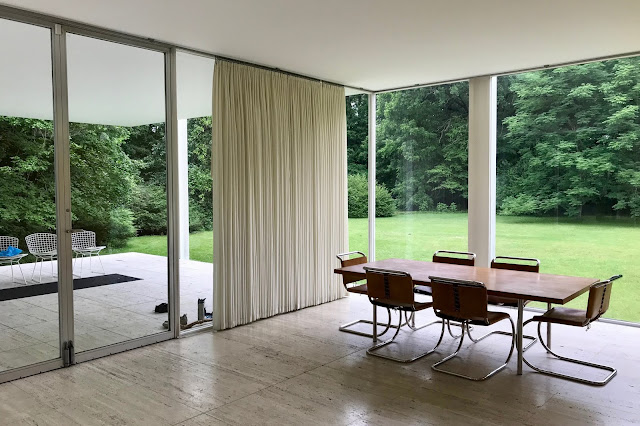 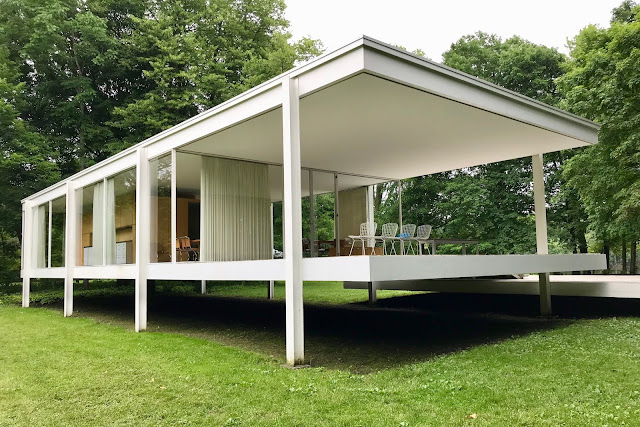 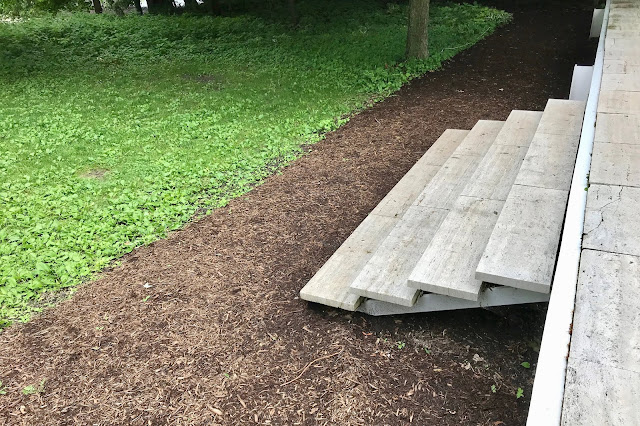 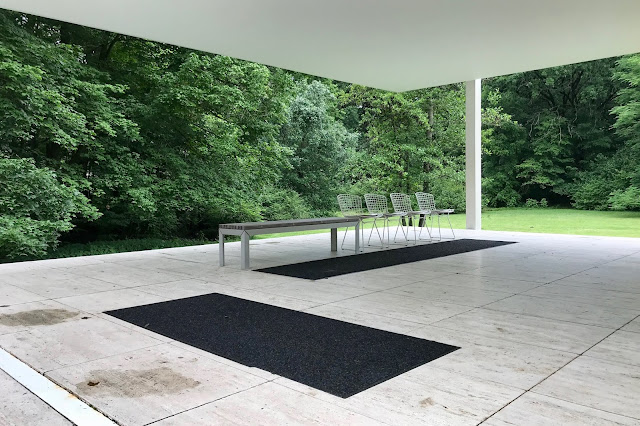 Folkestone Warren and a Railway through the Chalk 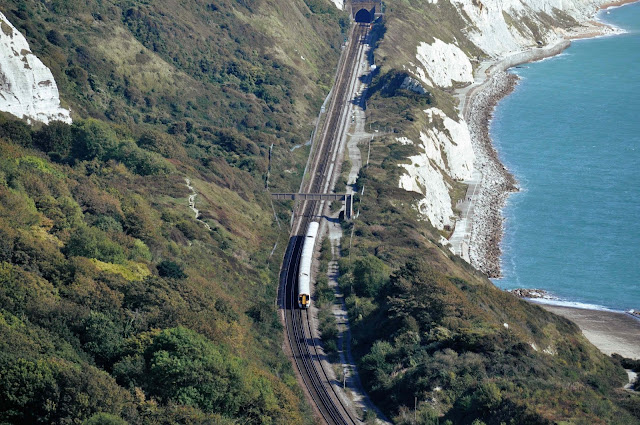 Folkestone Warren is an area of landslip between the cliffs and the coast to the east of the town. It’s composed of fossil-rich chalk and provides an excellent habitat for birds, insects and plant life. Since 1884 a railway connecting Folkestone with the port of Dover has run through it – there’s a network of footpaths through the thick vegetation but no public roads traverse the site. Two years later a station (Folkestone Warren Halt) was built on the landslip, much to the displeasure of the landowner, the Earl of Radnor whose objections forced it to close within a few months. In a more favourable climate it reopened in 1908 and tea rooms, ornamental gardens and picnic sites were developed to attract visitors by train. Between 1915 and 1919 it was out of action following a major landslip that necessitated complete rebuilding of the railway. Final closure came in September 1939. 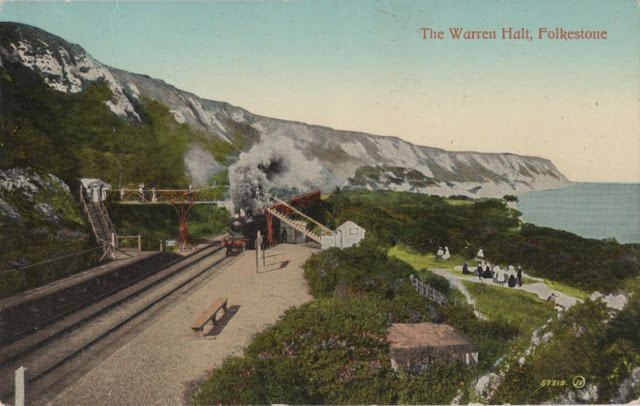 Panoramic views of the entire undercliff and the railway can be seen from the cliff top at Capel-le-Ferne. The area is designated and managed as a Site of Special Scientific Interest and operates as a Country Park. Such a photogenic location offered lucrative opportunities for the postcard industry and cards were printed and sold in great quantity. Many of them include the railway, and a few focus on the station itself. Some even succeed in capturing something of the incongruity of a station in such a remote location – an effect that the Belgian Surrealist, Paul Delvaux brought to life in his Gare Forestière. 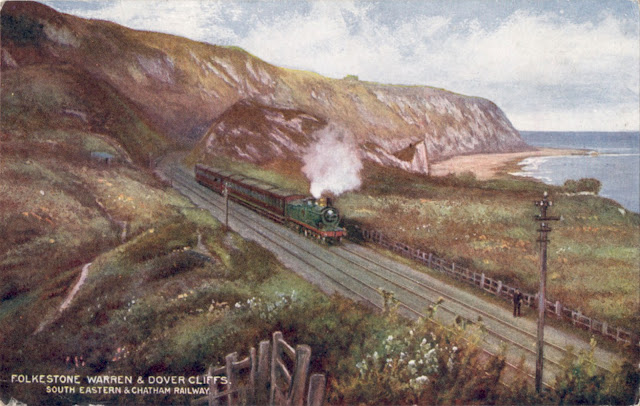 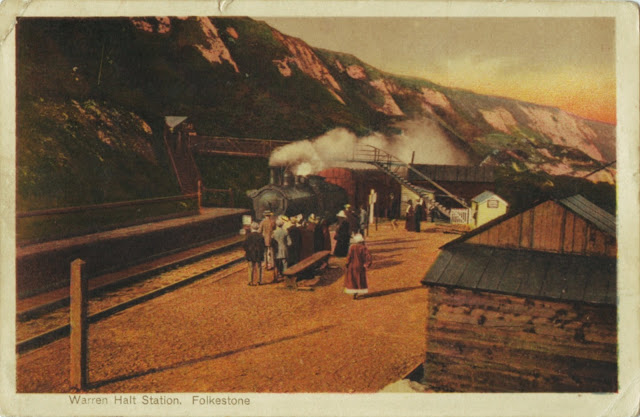 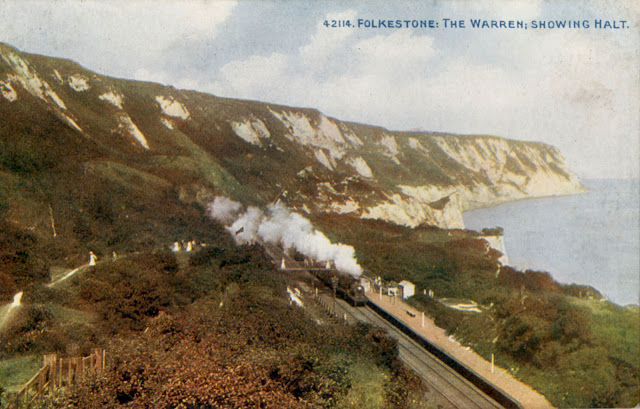 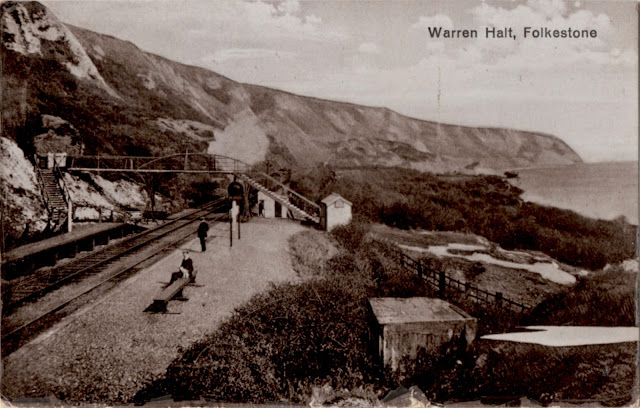 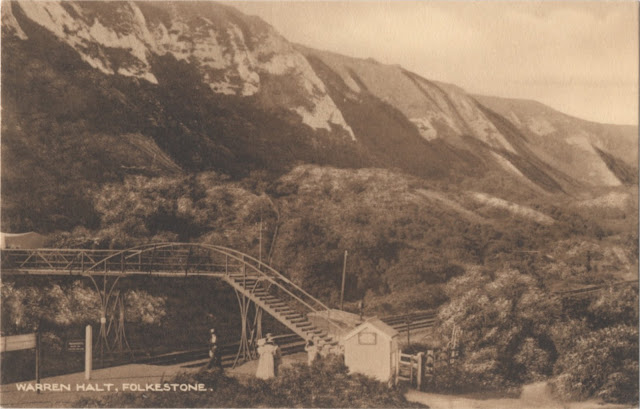 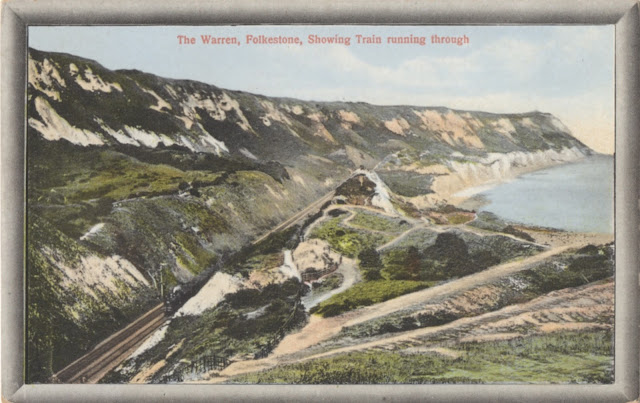 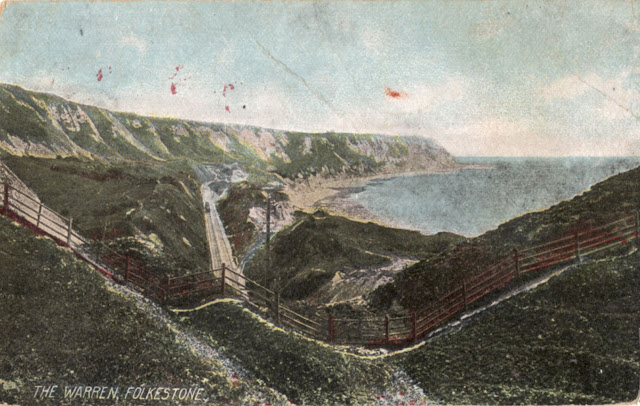 A Visit to the Art Institute, Part 2 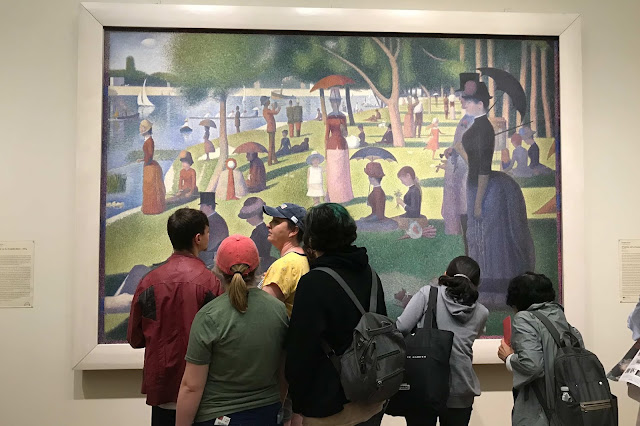 In the space of a fortnight in June, I had the opportunity to see both of Georges Seurat’s monumental masterpieces. In London, after visiting the Sorolla exhibition I battled through the National Gallery to the Post-Impressionist room and Seurat’s Bathers at Asnières. It was the wrong decision – the painting was besieged by a noisy, unruly mob, jostling for the most advantageous selfie-position. No space for contemplative response, no space for careful scrutiny. This wonderfully ambitious and experimental painting has taken on a new existence as a piece of scenery, something important enough to merit a casual glance but not important enough to be worthy of close study. 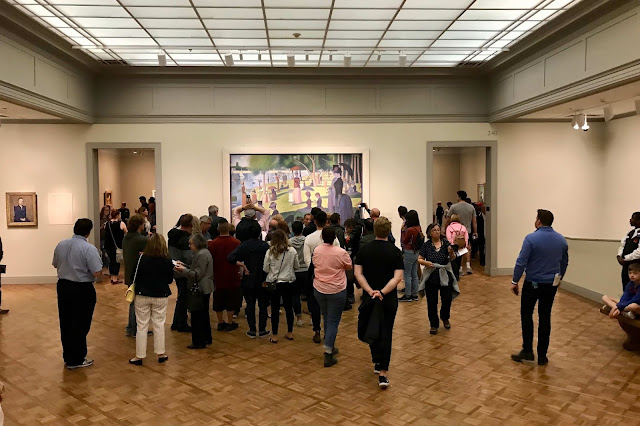 In Chicago, Seurat is a star – A Sunday on La Grande Jatte is one of the centrepieces of the collection and occupies a wall of its own in a place where it really can’t be missed. Once again, it was confronted by a crowd, but a more respectful audience than in London. Much easier to navigate through and reach the target. This left space to get a sense of its magnetic presence and appreciate what an extraordinary and baffling painting this is. There is no simple reading - curators and historians cannot agree on what the painting is about. Some see social significance in the depiction of petty bourgeoisie leisure activities as an extension of the artist’s earlier observation of the off-duty working class at Asnières. There are those who see a meditation on the contradictory world of high fashion in the meticulously observed outfits on display and the mannequin-like figures. In their isolation from one another, some see the figures as inhabiting a critique of capitalism and consumerist conformity. Others detect irony in Seurat’s apparent mockery and caricature of social pretension. A formalist evaluation is focused on Seurat’s further refinement of the pointillist technique and his methodical surface construction according to the scientific principles of Charles Blanc, Eugène Chevreul and Ogden Rood. Which induced some to view the painting as an endorsement of progressive republican ideals. 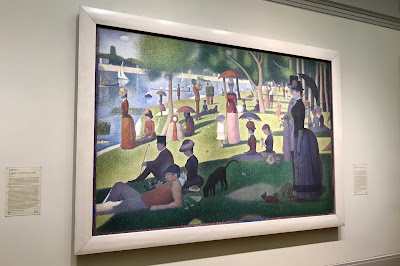 The existence of multiple interpretations is one of the things that makes Seurat such an intriguing artist. His interests include the science of optics, radical politics, contemporary fashion and popular print media, especially caricature. These are not easily reconciled into a comfortable description of an integrated personality. Given his reticence, there is no easy way to assess his character and motivations. Personal privacy was a major concern and he may have taken silent pleasure in confounding attempts to assign his work to a single point of view. Paradoxically, Seurat’s cool and unemotional paintings were a gateway for Van Gogh, enabling him to achieve greater intensity of feeling by adapting the pointillist technique to invigorate his paint surfaces and colour combinations. Pissarro assimilated pointillism into his painting vocabulary and re-energised his output in the latter part of his career. There was a large tribe of Seurat followers active in France, notably Signac, Luce, van Rysselberghe, Cross and Angrand. Derain, Braque and Matisse had a brief flirtation with pointillism in the early days of Fauvism. In Italy the pointillist technique was enthusiastically adopted by fin de siècle symbolists and bequeathed to the Futurists in whose dynamic paintings it would enjoy a final incandescence. Such lesser aftershocks may bear little comparison with the powerful influence of Cézanne but were not without significance.


We have only fragmentary glimpses of the inner Seurat. Some letters survive, plus some notes he wrote about his painting technique. An academic training in the manner of Ingres fed his preference for order and objectivity. Anecdotes are thin on the ground - he was seen at the Café d’Athènes and he spent time in the company of Paul Signac and Félix Fénéon. Friends and colleagues report a self contained individual for whom a Bohemian lifestyle held little appeal. Sober and deliberately unostentatious in appearance, he seemed comfortable with his bourgeois origins despite his anarchist sympathies. The existence of his mistress and mother of his child, Madeleine Knobloch, only became known after his death in 1891. Seurat is an artist who approached all his work with the utmost gravity in terms of planning and forethought without endorsing any particular estimation of its meaning and value. He had the gift of maintaining just enough distance between himself and the great weight of critical interpretation built upon his achievements. It’s an easy matter to summon up a mental picture of a grumpy Cezanne, an embittered Lautrec, a lascivious Gauguin or an anguished Van Gogh but Seurat is elusive. The only film portrayal came in Minelli’s Lust for Life (1956 Van Gogh biopic) in which Seurat, played by David Bond stands on a step-ladder dabbing away at the Grande Jatte while Van Gogh (Kirk Douglas) declaims his admiration. Death came suddenly at the end of March 1891 when he took to his bed with a serious cough and died within three days leaving his admirers to speculate on what might have been.