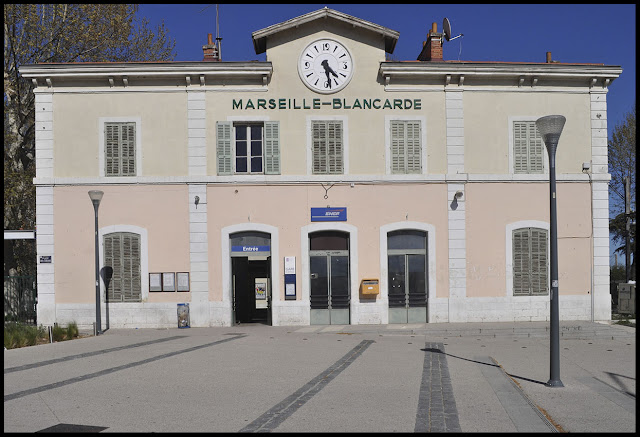 Suburban stations often seem strangely bypassed by the tide of human affairs. They may be neat and tidy but an air of inertia prevails. The busy district of Blancarde in Marseille is served by the city’s Métro line and both of the two tram routes that cross the city. It also has a mainline railway station of the sort that accountants would long ago have condemned as unremunerative on Britain’s skeletal rail network. A fully staffed ticket office, largely untroubled by customers graces the foyer beyond which passengers must cross on foot a lightly used, weed infested freight line to access the platforms. This feature alone would have been seized on in Britain as a totally unacceptable risk to passenger safety and the station summarily closed. 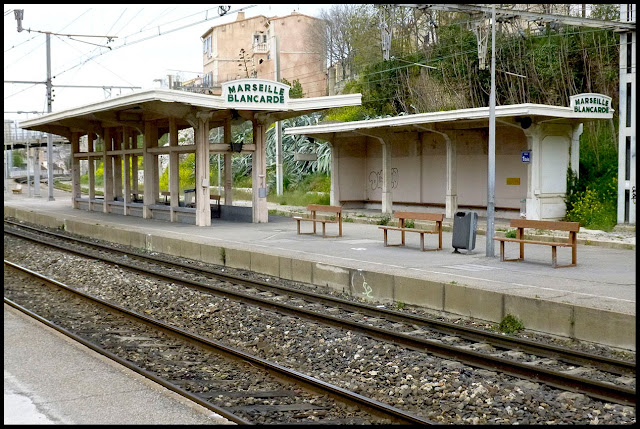 The main building has the air of a typical SNCF country station transplanted into the city. On the platform, the shelters are of prefabricated concrete construction with the station name lettered in relief. Local trains to and from Toulon stop every hour and the freight branch line serves a domestic waste transfer depot. In the distant past, some travellers for Marseille would alight at Blancarde to avoid the congestion at Gare St-Charles, taking a tram to the city centre. There are transport planners who dream of a return to this practice but while the TGVs continue to glide through without stopping there’s little chance of that happening. So for the present the station remains as an island of tranquillity in a busy neighbourhood. 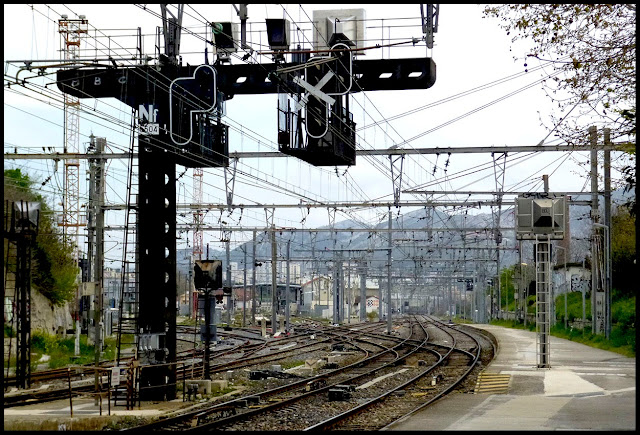 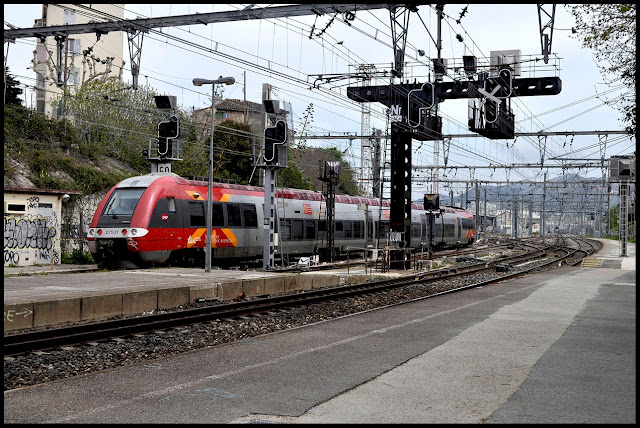 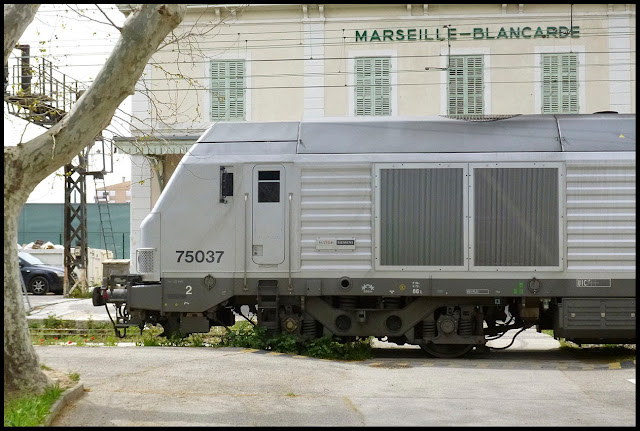 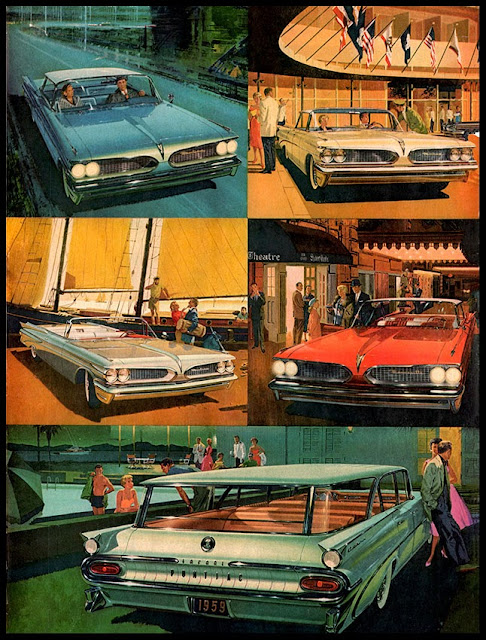 From 1959 to 1971 Van Kaufman (VK) and Art Fitzpatrick (AF) worked as a collaborative partnership, illustrating exclusively for Pontiac Motors. Fitzpatrick had previously been employed as an automotive designer while Kaufman had worked in the Disney Studio as an animator and background artist. Illustrators are often solitary creatures and this level of cooperation is very unusual but both Kaufman and Fitzpatrick had prior experience of collaborative workplaces. The division of labour meant that Fitzpatrick illustrated the vehicles while Kaufman painted the backgrounds. 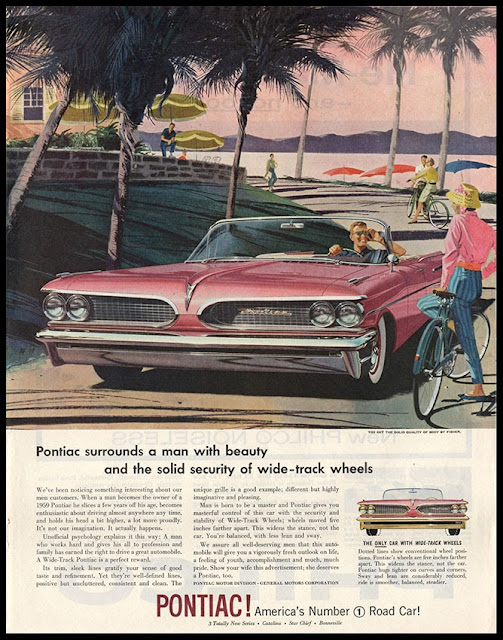 This was a late flowering of the art of the illustrator – by 1959 most car advertisers favoured the photographic image but the VK-AF team brought an unequalled wealth of surface detail combined with an intoxicating richness of colour. The cars appeared longer and wider than ever - the paintwork dazzled and the chrome sparkled with transcendent brilliance. Unlike some other manufacturers, Pontiac advertising had never been aimed directly at the blue-collar readership by locating the car in everyday surroundings – the school run, the shopping trip, the drive-in, the gas station, the toll booth. But in the 1960s they cultivated an air of status and exclusivity with exotic overseas locations, grand mansions and the pursuits of the high earners all expressed in super-saturated, high contrast colour palettes. Kaufman employed a variety of styles for his landscapes and cityscapes from hyper-realism, through impressionism to a more contemporary, gestural finish but the cars were invariably immaculate and sublime, almost always presented in a position of rest to be admired for their sculptural qualities. This is a small selection from their prodigious output, claimed by some to be more than 700 in all. There’s a vast archive to be seen at Pontiacsonline. 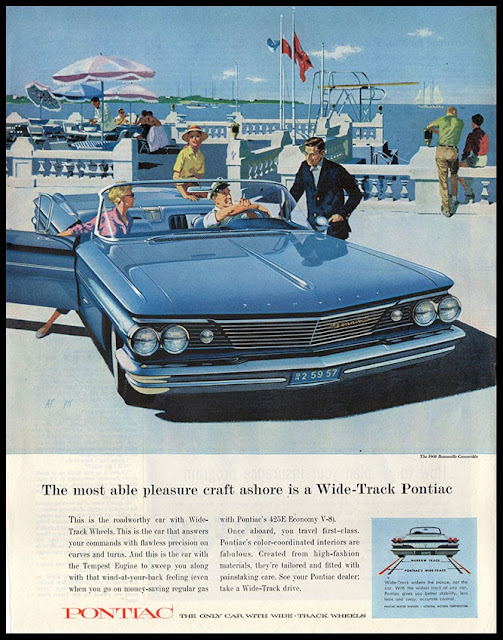 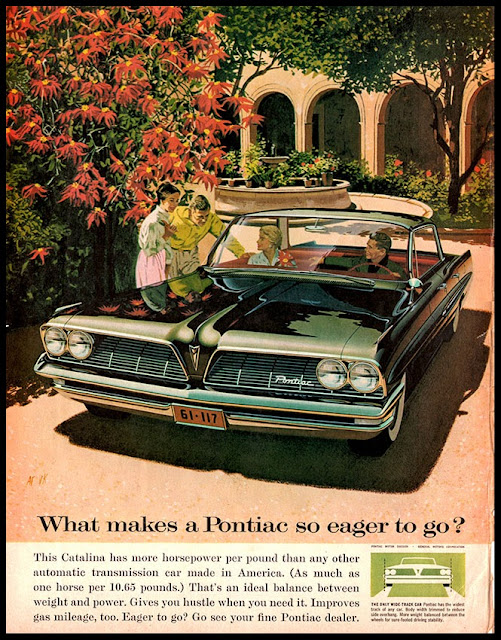 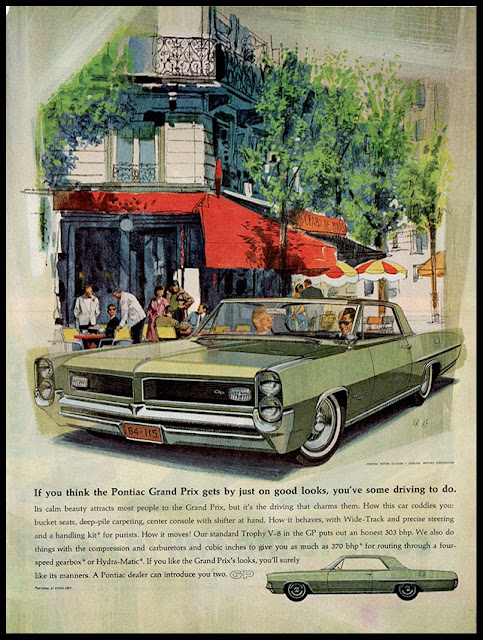 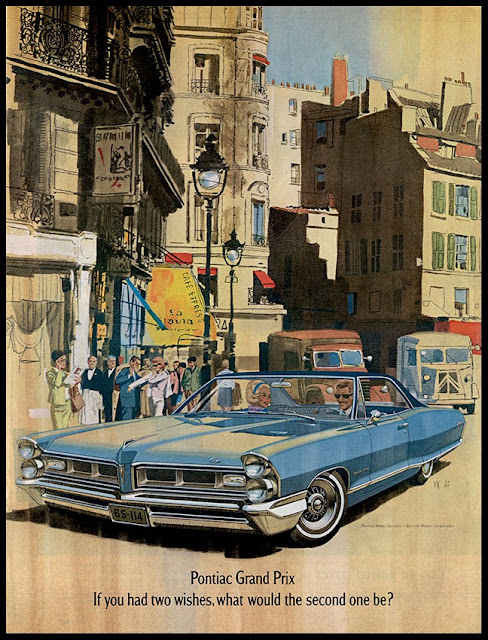 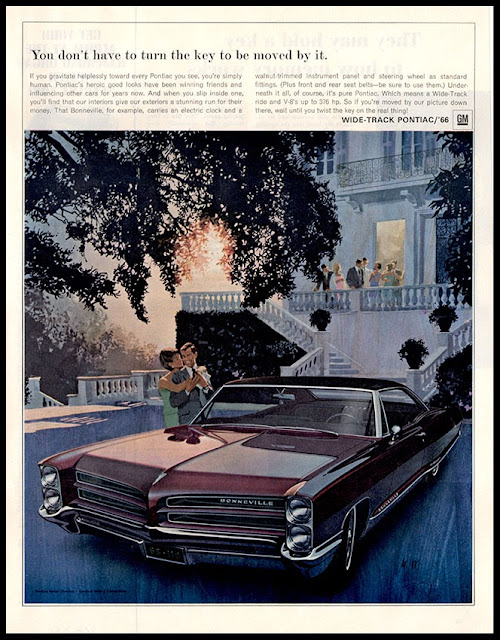 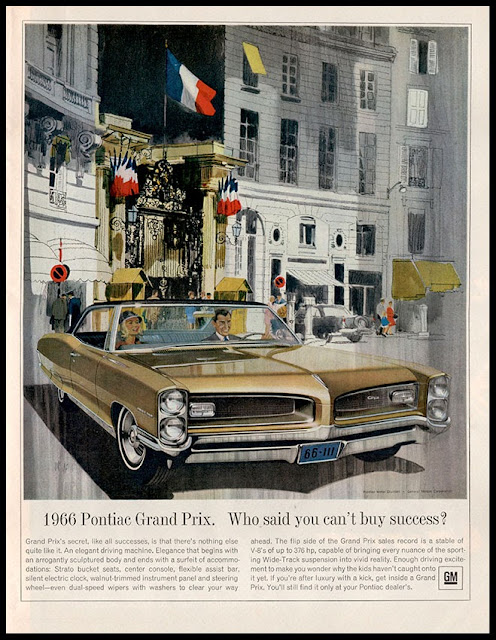 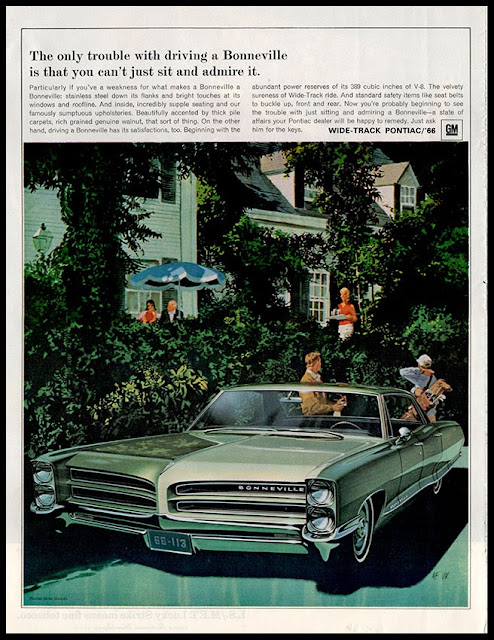 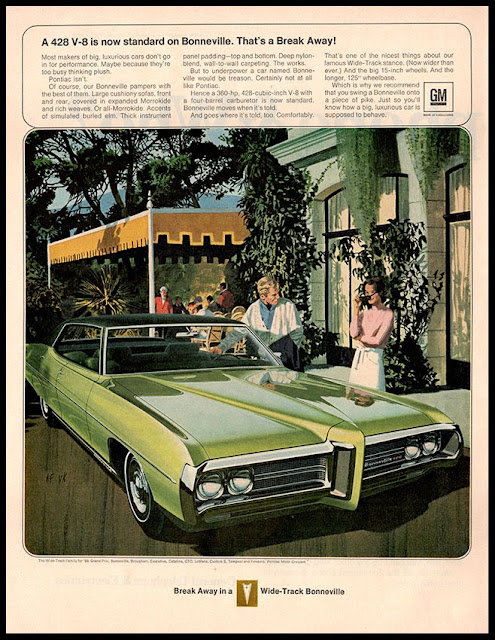 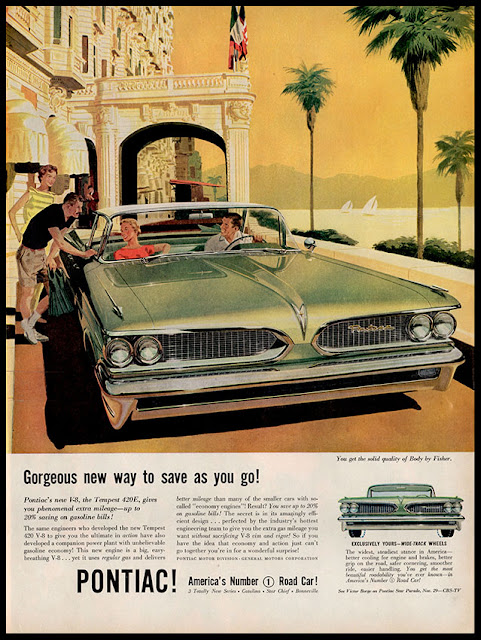 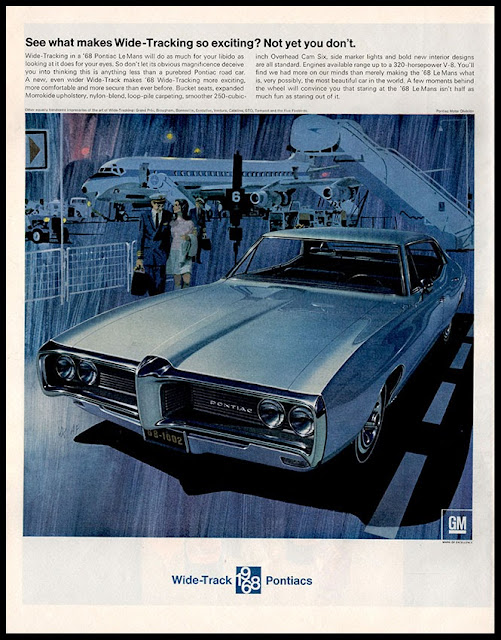 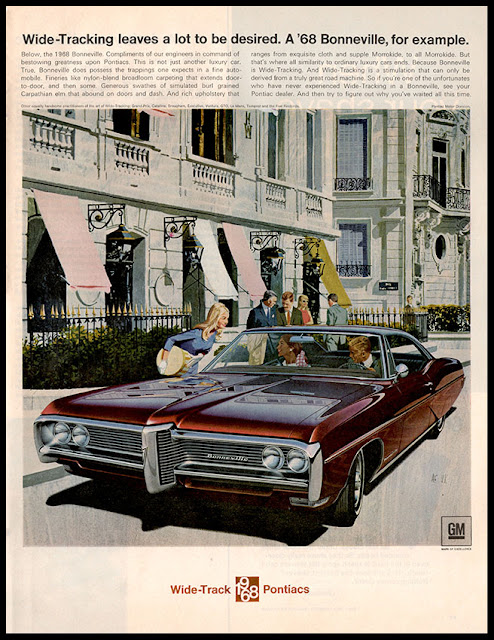 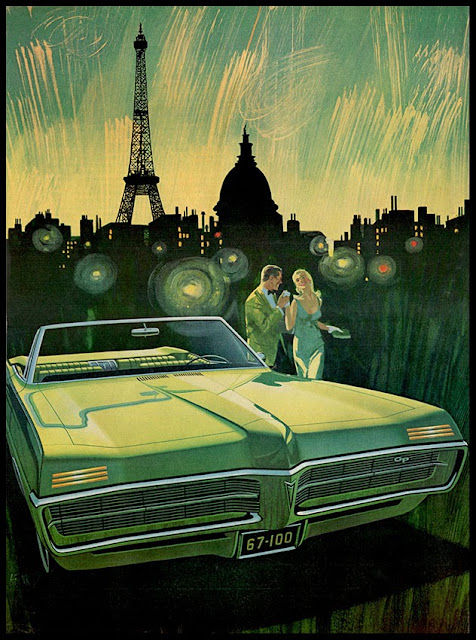 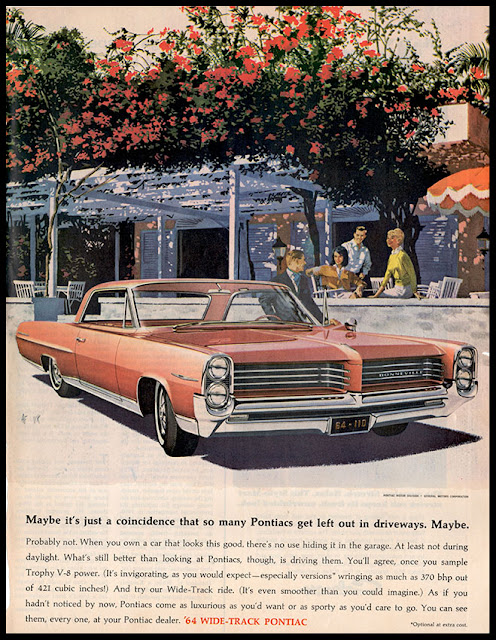 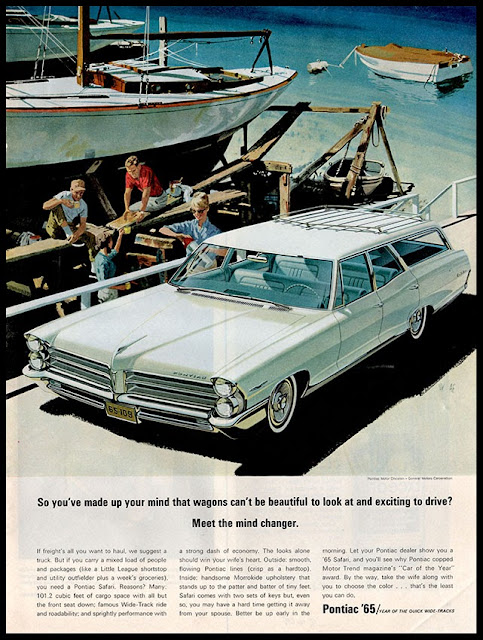 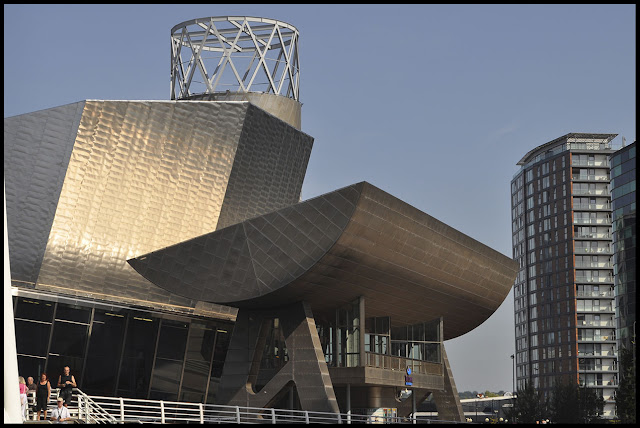 These are the gleaming glitzy panels of the Lowry at Salford behind which the cultural legacy of this notorious but much loved curmudgeon has been diligently curated for more than a decade. The building is yet another vertigo-inducing assault on verticality in the interests of making a big statement with attention-grabbing forms served up with a pinch of maritime flavouring. In an irony much remarked upon, Lowry’s tableaux of industrial gloom and despondency have been incarcerated inside a gilded casket alongside a shopping mall that borrows his name to attract bargain hunters to a tedious selection of outlet stores. Despite all this we are repeatedly informed by cultural commentators that Lowry and his work have been unforgivably ignored by the metropolitan art establishment with its inbuilt antipathy to anything that reminds us of the existence of working class life. According to Jeanette Winterson, indifference towards Lowry’s work is tantamount to contempt for working class values. It’s an unsupportable claim but a vital element in a revisionist scheme to reposition Lowry’s paintings in the art historical narrative. Some highly imaginative intellectual archaeology has been deployed to locate evidence of a profound examination of the human condition lurking beneath the surface arrangements of undifferentiated stickmen. An artist formerly regarded as an elective marginal with an anti-modernist sensibility is suddenly revealed as a champion of the oppressed. These exercises in reputational rehabilitation are regular events (the art of the 1980s looks likely to be the next focal point) and while welcoming the underlying spirit of intellectual curiosity the case for Lowry’s greatness seems especially feeble and unconvincing.


There’s an idea around that Lowry possessed a unique insight into the dehumanising influence of industrial capitalism and mass-production. His tiny figures plod through their wretched and depressing environment bereft of hope or ambition. To me this seems deeply insulting to working class life which was both richer and more complicated than Lowry could ever understand. Humour was one powerful weapon in surviving the tyranny of wage-slavery. Yet humour is completely absent from Lowry’s work. By endlessly portraying the huddled masses as helpless victims, he stripped them of their individuality as characters and personalities and furthermore, denied them any hope of future redemption.

William Roberts is a far superior artist to Lowry. They shared a preference for self-imposed isolation and a common interest in everyday subject matter. Although Roberts engaged with modernism in his younger days, it was a love-hate relationship and like Lowry, Roberts discovered that modernism was something he could dispense with in later life. His figures were geometrically stylised in a mechanistic fashion ultimately derived from Cubism but they never lost their individuality. Roberts’ 1940 painting, The Munitions Factory is a prime example and can be seen in the nearby Salford Museum and Art Gallery. Unlike Lowry, Roberts was an alert observer of the vagaries of fashion and style and recorded them humorously and sympathetically in his figure compositions. From what we know his political opinions were every bit as reactionary as those of Lowry but his work reflects a lively appreciation of human diversity that can’t be found in the monochrome universe of stickmen.

Another interesting comparison is with the work of largely self-taught Cardiff artist, Charles Byrd (b. 1916), a selection of his work can be seen here in the care of Cardiff Central Library. Byrd’s paintings of industrial South Wales deal with similar subject matter to Lowry’s but he sought out a wider range of viewpoints and developed a much more adventurous approach to composition. Like Lowry, Byrd employed a limited palette without conveying the kind of terminal bleakness so typical of Lowry. Unlike Lowry, Byrd has never had a West End dealer (Lefevre) nor is his work in any national collections. In terms of quality there is little to choose between them – Lowry may have the edge in evoking a sentimental response but Byrd seems to get much closer to describing the feel and texture of the industrial landscape.

Part of the case for Lowry centres around the incontestable fact that representations of industry are few and far between in 20th. century British art, leaving Lowry as the undisputed master in the field. A handful of Lowry’s near contemporaries did tackle the industrial scene and in almost every instance their efforts are superior to Lowry’s in terms of pictorial invention and paint handling. The shortlist below can be seen on the BBC Your Paintings website for comparison.
CRW Nevinson          Any Wintry Afternoon in England (1930)
Loading Timber at Southampton Docks (1917)
Edward Wadsworth   Top of the World (1942-43)
Stanley Spencer       Shipbuilding on the Clyde Series (1940)
Stanhope Forbes       Permanent Way (1924)
Sheffield, River and Smoking Chimneys (1915)


I have a suspicion that the unmistakeable alienation sensed in Lowry’s work is the key to wider acceptance in the art world. Perhaps we should be comparing him with Francis Bacon whose visions of debauchery, dissipation and despair are held in such high regard. Bacon was thrilled by the sheer ugliness of existence and Lowry was equally thrilled by the unrelieved squalor of the industrial North-west. Neither show much empathy towards their subjects and both fastidiously detach themselves as individuals from the world they portray. The singular difference is that Bacon’s paintings make no appeal to sentimentality whereas much of the popularity of Lowry’s work is due to the ease with which it can be absorbed into a sentimental vision of times past. Flat caps and mufflers, whippets and ferrets, clogs and hobnailed boots, pigeon lofts and outside toilets, workhouses and board schools – all gone and never to return but so, so memorably picturesque. Lowry could be a strong candidate for the post of court painter to Kim Jong-un - nuclear missile launch sites could easily take the place of factory chimneys and satanic mills and there’s a generous supply of dehumanized masses to observe and record.
Posted by Phil Beard at Monday, August 05, 2013 1 comment: 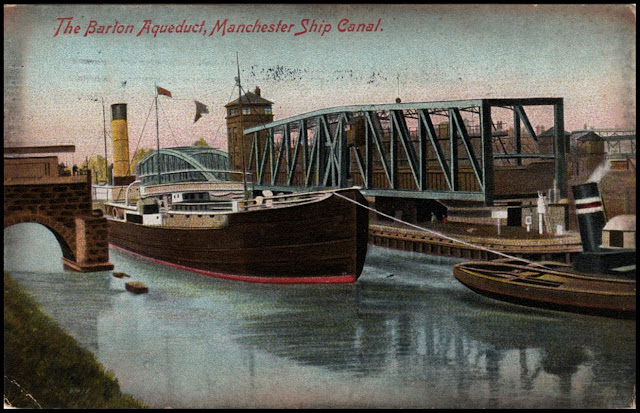 Excavating through the Cheshire countryside to build the Manchester Ship Canal between 1887 and 1894 involved repeatedly slicing through existing lines of communication – all of which had to be maintained. With a need to provide clearance for ocean-going shipping the favoured solution for roads was the provision of swing-bridges to allow free passage with the minimum of delay. In all there were six plus an audacious swing-aqueduct that carried the Bridgewater Canal across the waterway at Barton. The Barton Road and Barton Canal swing-bridges pivot on an artificial island in the canal – all the other swing-bridges pivot on the bank. They are all very similar in design and with a single exception they pivot on the north bank. Designed to prioritise the needs of shipping over those of road traffic, they must be a constant source of irritation to road users kept waiting while cumbersome ships pass slowly by. What we see in these photographs are detached sections of roadway, temporarily devoid of traffic and rotated through 90 degrees. The Barton Aqueduct is laden with some 800 tonnes of water from the Bridgewater Canal. The photographs that follow show all the swing-bridges on the Manchester Ship Canal from east to west, bracketed by a pair of vintage postcard views. 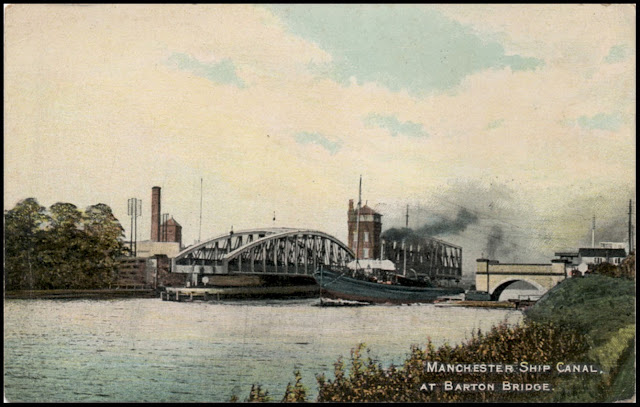