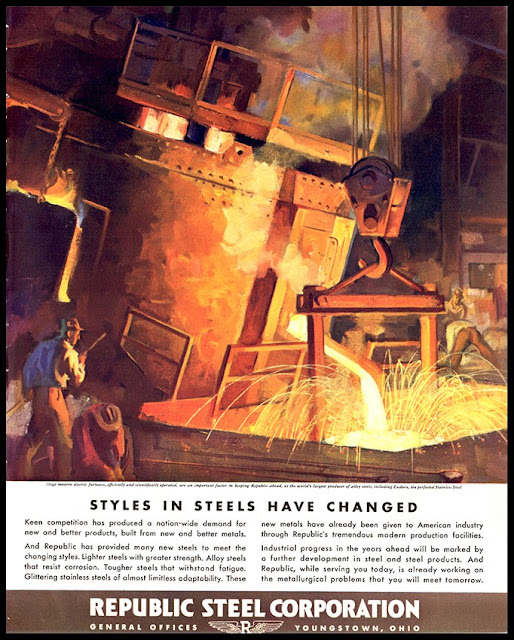 Fortune magazine advertised itself to the trade in the 1930s as the premier medium for steel industry advertising, gathering testimonials from major producers including Republic Steel praising the efficacy of Fortune in an exercise of mutual back-slapping. These examples come from an extended advertising campaign that Republic Steel placed in Fortune magazine. They seem to be themed around weight and mass. A heavy style for a heavy product. It’s a bulk commodity so most readers will not be placing an order for a thousand tons of steel plate in the near future so the value lies in keeping the company name in the public eye. This was an era where weight really mattered – public opinion was easily impressed with heavy construction and engineering ingenuity was more widely admired than it is today when portability and weightlessness are the most desirable characteristics in a consumer product. Back in the Thirties, the image of the white hot crucible in a dark and cavernous industrial space still had the power to impress the audience. 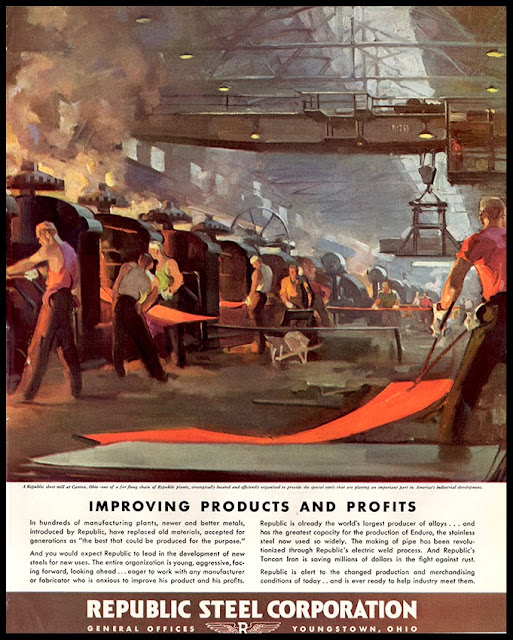 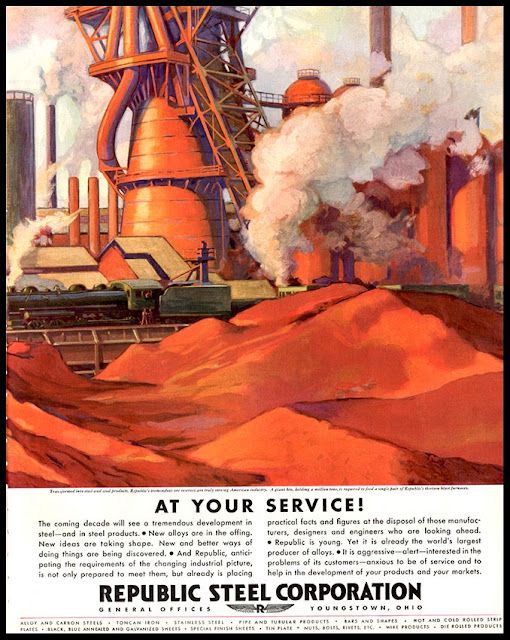 The message was reinforced by some muscular drawing and restrained use of high colour tones. Sploshy brushwork and vigorous scrubbed-on paint was the visual language of the mass-consumption conventional landscape where the intention was to catch the eye without opening any sort of dialogue with the viewer. These images strive for a romanticised industrial heroism – a sense of hard-won productivity in harsh, elemental conditions. The smell of hot oil and burning cinders and the thunderous noise of steel-hammers and forges are all invoked. 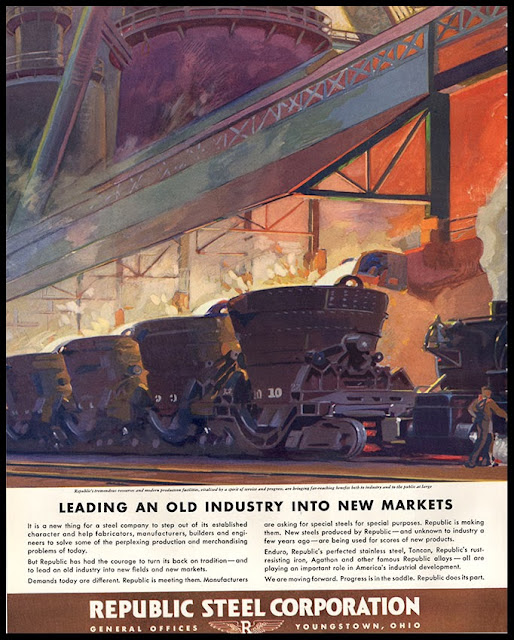 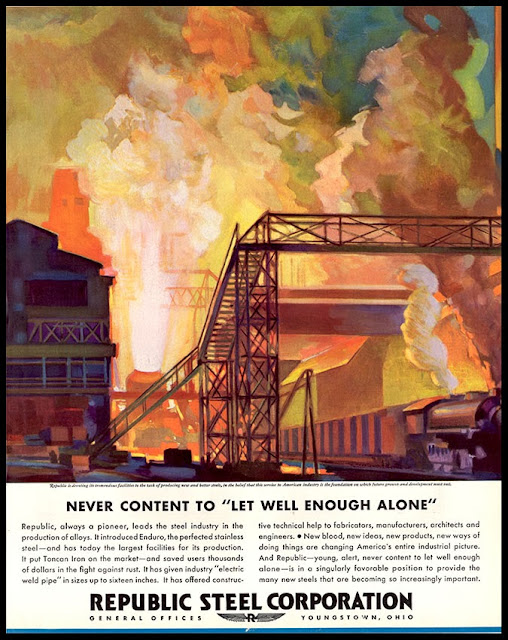 Republic Steel at the time of this campaign was a newly-merged business struggling with the collapse of demand for steel in the Great Depression. It was not a great place to work being notorious for adversarial labour relations. A refusal to recognise unions at the Chicago plant provoked a strike in 1937 that culminated in the Memorial Day massacre when 10 unarmed demonstrators were shot dead by Chicago police. Republic was number three in the US (behind US Steel and Bethlehem Steel) and keenly felt the need to publicise itself. But while US Steel was busy attempting to humanise itself via Rockwell inspired scenarios Republic remained committed to a hard-line industrial aesthetic. By contrast, U S Steel would abandon its longstanding opposition to unions in the workplace in 1937 when it accepted collective bargaining. 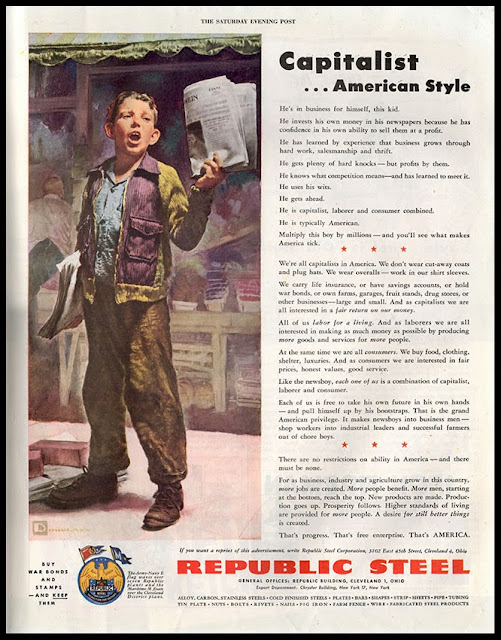 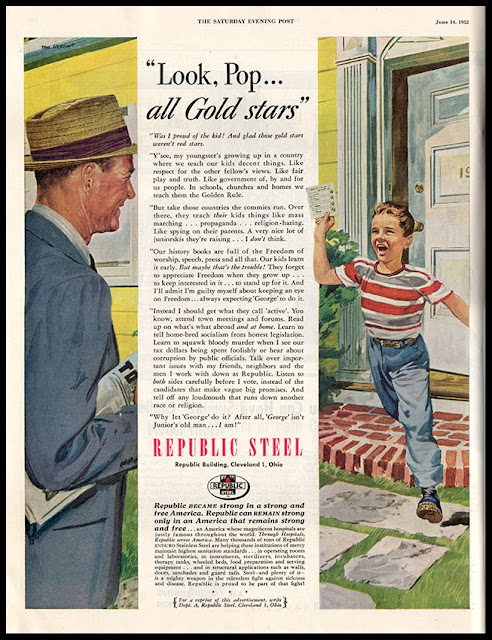 In later years Republic would become a voluble cheerleader for capitalism and free enterprise in the 1940s and a militant cold warrior in the post-war era. It was an age of high anxiety and Republic was not the only business to sense a responsibility for educating the public in the virtues of free-enterprise and the perils of socialism Demotic language and a matey directness was typical – the voice of good sense from a concerned neighbour. There was also an unrealistic expectation that consumers would happily settle down to a good long read, at the end of which collectivism would be permanently renounced. The real function of message-lead advertising was corporate self-flattery confirmed by the offer to supply reprints for circulation among friends and colleagues who may be showing signs of straying from the path of freedom. For a blood-curdling selection of these ads, please visit Chris Mullen’s Advertising Hall of Shame (The Visual Primer of Advertising Clichés). Posted by Phil Beard at Wednesday, November 27, 2013 No comments: 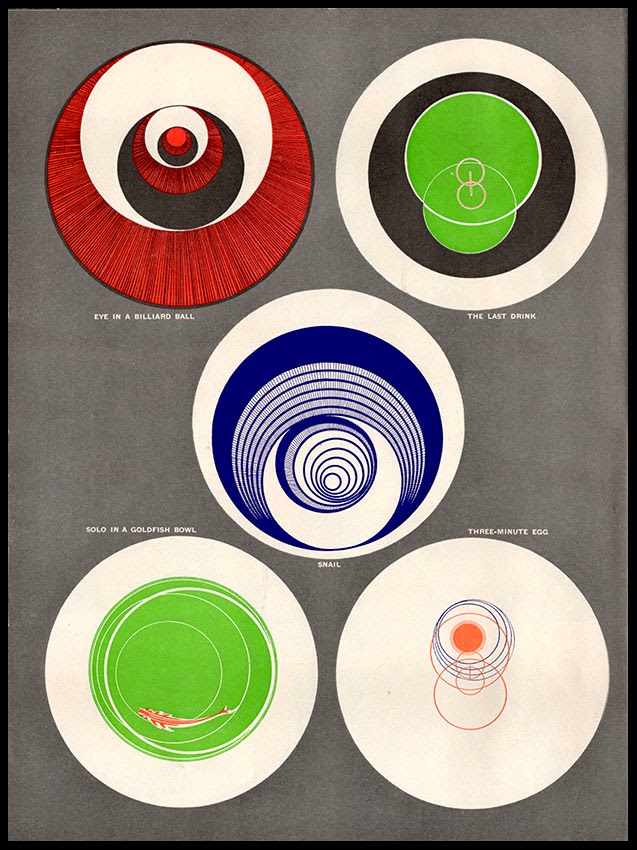 Depending on who you listen to, Duchamp today is the Oracle of Conceptualism, progenitor of a golden age of ideas-based contemporary art or the Great Iconoclast, responsible for the irreversible subversion of all that was great and good in the Western tradition of painting. His admirers claim that he broke down the barriers between art and life enabling the artist to designate anything or anyone as a work of art. All subject taboos were lifted leaving artists free to explore the world at will in any chosen medium. A vocal minority of detractors deplore the death of the hand-crafted object in favour of assembly line methods that Duchamp prefigured and attribute every affront to common decency and good taste in the art world to his malign influence. Duchamp’s parodies of the process of making art and his intellectual game-playing are anathema to the high-minded defenders of autonomous artistic integrity for whom the only art that counts is a product of endless struggle and toil with intractable materials. 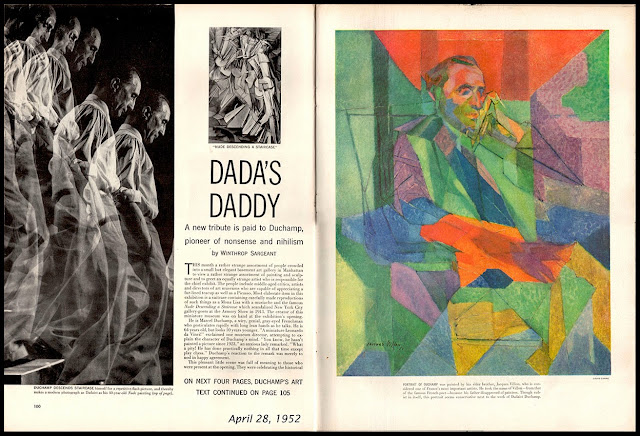 Duchamp would turn 65 in 1952 and had assisted the organisation of an exhibition (Duchamp Frères et Soeur) at the Rose Fried Gallery, New York in February and March. Chess remained his most ostensible preoccupation, while he continued to live in the top floor apartment at 210 West 14th. Street which he had occupied since 1943. All this publicity in the nation’s leading mass-circulation magazine must have tested Duchamp’s celebrated nonchalance about his own reputation. One of the earliest signs of his growing celebrity status may well have made him feel queasy. Whether Duchamp was a regular reader of Life magazine is not a matter of record. Was he more interested in the latest Erle Stanley Gardner story in Saturday Evening Post? Perhaps he leafed through the pages of the New Yorker and Esquire. A secret passion for Breezy Tales and Amazing Stories is not impossible. Chess magazines, View and Cahiers d’Art are more likely to have had his attention. Of course he may also have glanced at Teeny’s copies of Vogue or Harper's Bazaar. 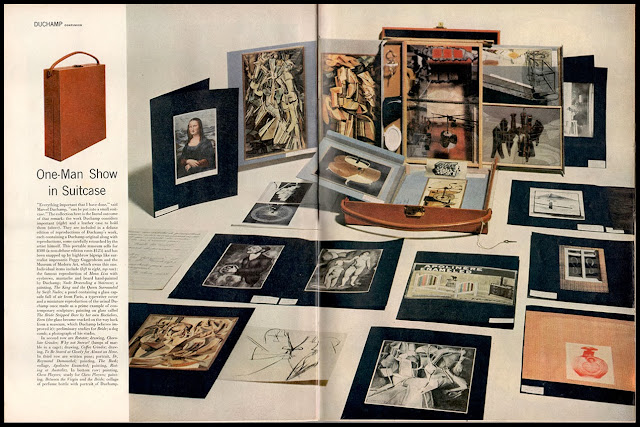 Duchamp’s Boîte-en-valise (shown across a double spread) had been a work in progress since 1935 and the first completed examples appeared in 1941. The business of assembly went on for years. A small team (including Joseph Cornell) laboured away as the component parts arrived from France where Duchamp had prepared them before the war. Later editions of the Boîte-en-valise would be more professionally produced and Duchamp would permutate the contents and vary the box to offer 300 versions in 7 editions in much the same way as the fashion industry extracts the maximum revenue from designer brands. In effect, Duchamp curated his own retrospective in compact form. For a collector the finished article was a precious object to be lingered over, cherished and carefully conserved, catering to the instinct for connoisseurship that Duchamp so actively despised. The Boîte-en-valise has a fetishistic fascination linking us to the world of toys, dolls’ houses and model trains via the idea of condensing a lifetime’s creative activity into a single small and confined space. 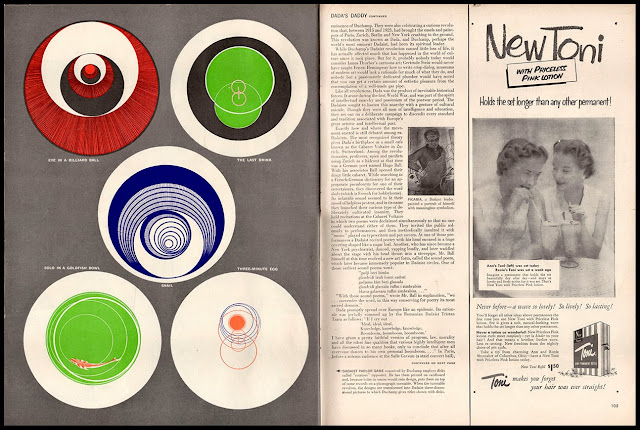 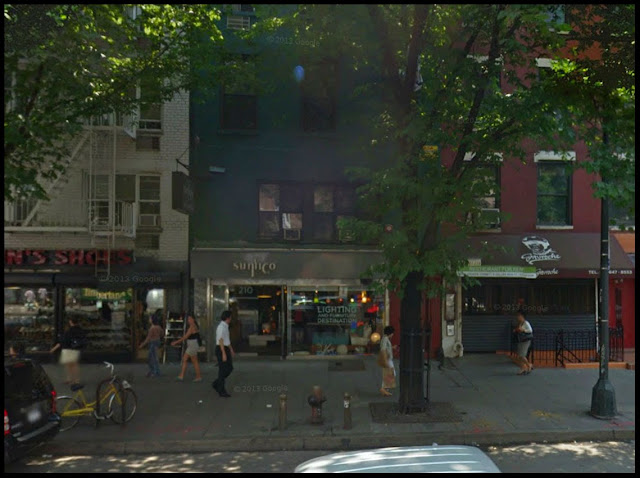 Posted by Phil Beard at Wednesday, November 06, 2013 No comments: