Père Lachaise – on the trail of famous painters 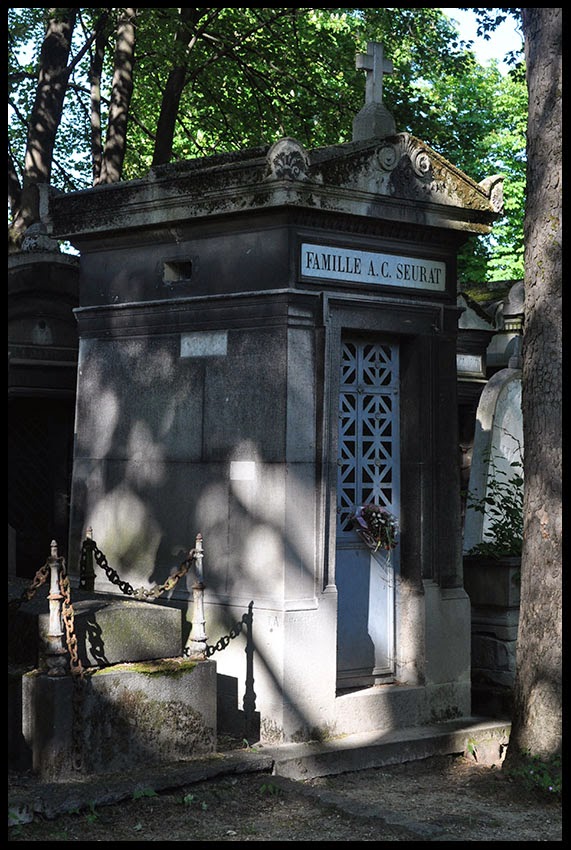 Amanda Vickery was on TV recently, filmed in the cemetery at Passy and deploring the modesty of Berthe Morisot’s gravestone compared with that of Edouard Manet (The Story Of Women And Art, BBC2). Off-topic digression – at the risk of sounding like Brian Sewell, for how many of the 60 minutes in each episode was Dr. Vickery off-screen? Not nearly enough for me. The constant in-your-face intrusion of the presenter, the arms that never cease from semaphoring and the wildly declamatory oratory contribute nothing to understanding and test the patience of even the most saintly viewer like myself. Back to the topic – it is surely misguided to equate the achievement of the deceased with the grandeur of their tomb. A recent walk around Père Lachaise on the trail of famous painters produced some interesting examples. 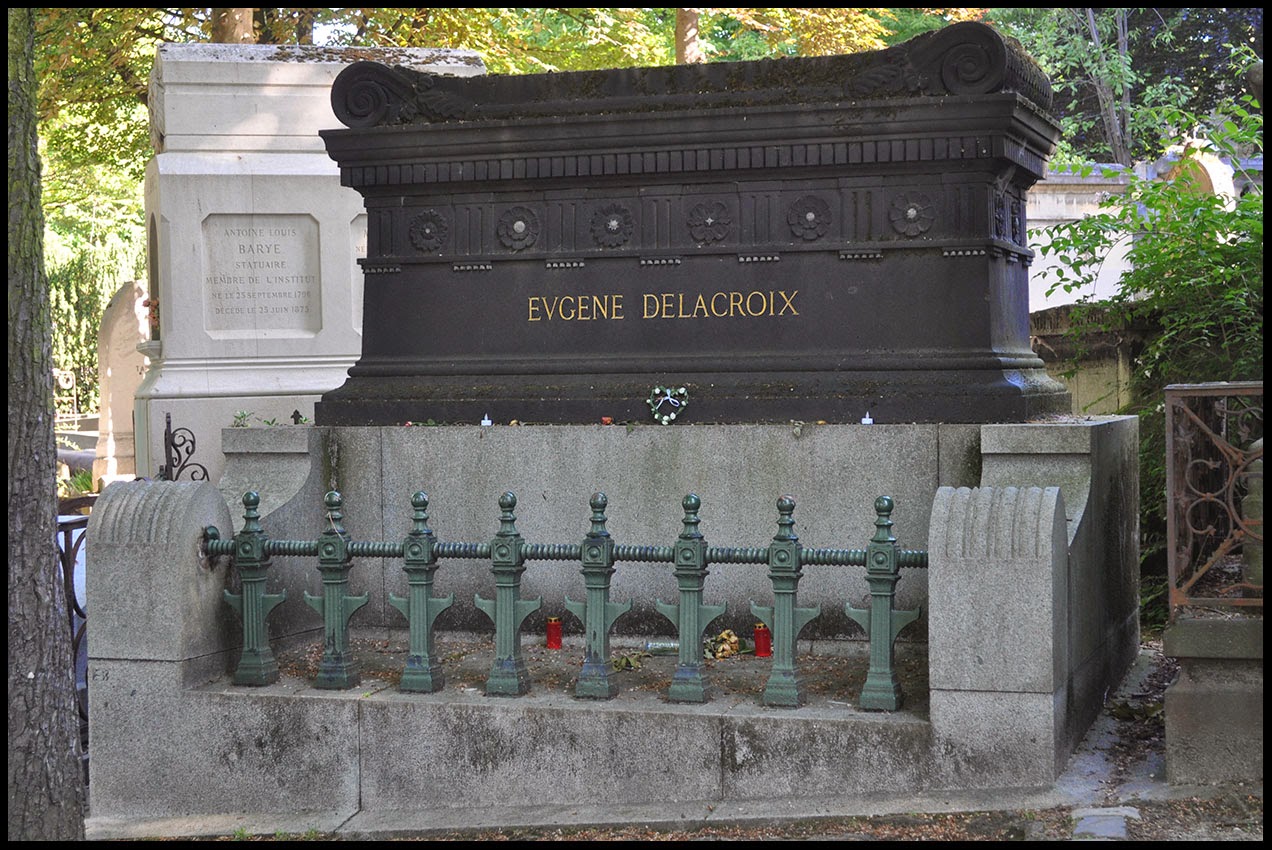 At the top is the grave of Georges Seurat – an austere family vault, a space-saving design of the type supplied by any of the monumental masons whose premises line the boulevard de Ménilmontant. Movie buffs may recall young Georges, perched on a stepladder in front of La Grande Jatte, discoursing on Divisionism to an excitable Van Gogh (Kirk Douglas) in Minnelli’s Lust for Life bio-pic. When Seurat died at the age of 31 he left behind some of the most significant and beautiful paintings of the 1880s and a career trajectory of immense potential that was cruelly truncated. The relative anonymity of his grave seems in keeping with his famous sense of privacy which has ensured that his biography is a scanty affair. 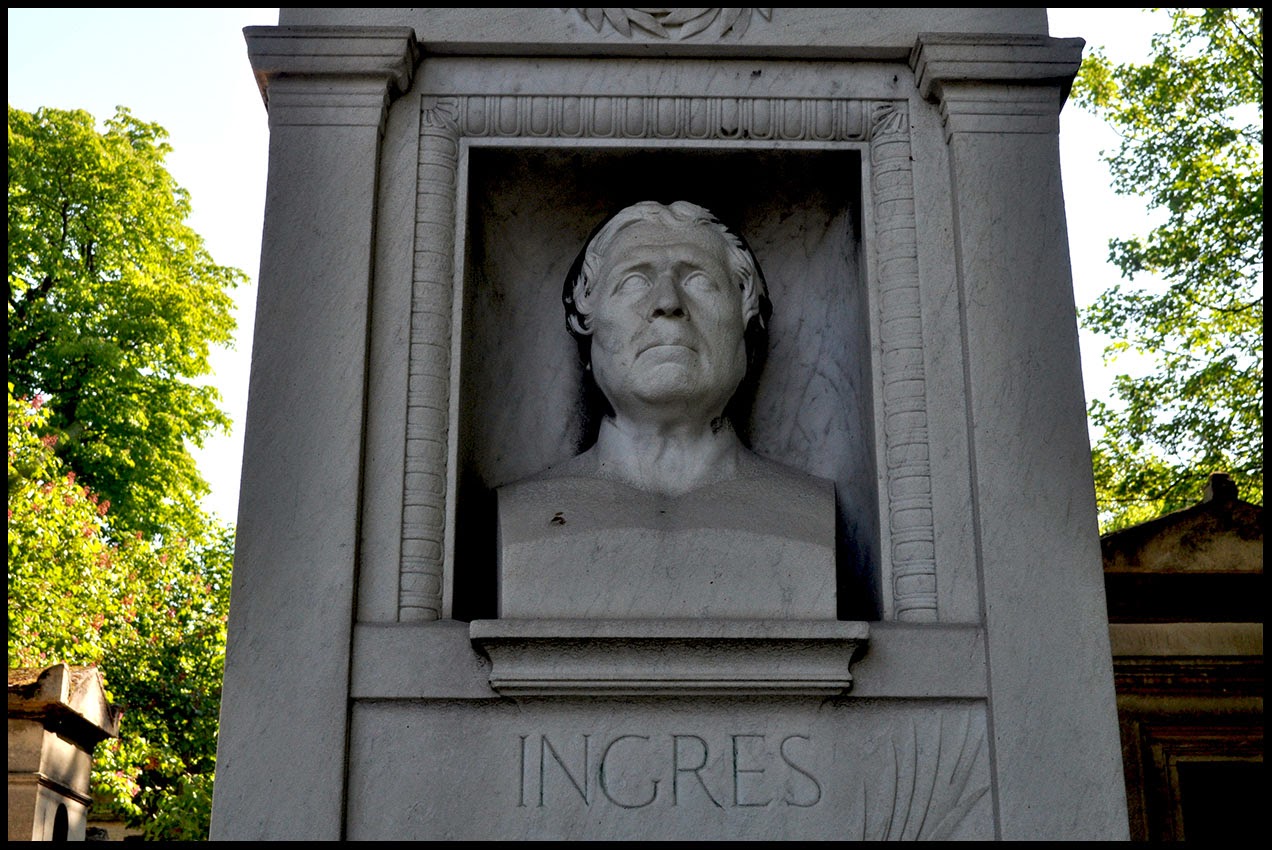 The tomb of Delacroix is more substantial and a simple inscription is left to speak for itself. That of Ingres includes a suitably severe portrait bust set into an alcove in a Neo-Classical plinth. Together they set a benchmark for dignified commemoration. Théodore Géricault died in 1824 at the age of 32 after a short but explosive career in which he developed a taste for visual melodrama on a grand scale that peaked in 1819 with Le Radeau de la Méduse, equally vast in terms of ambition and influence. This painting can be seen, modelled in relief on the side of Géricault’s memorial, on top of which his carved likeness lounges, paintbrush at the ready, in the manner of a sultan in his harem. This is a more grand affair with more than a little theatre about it, but compared with what follows, it’s a model of restraint. 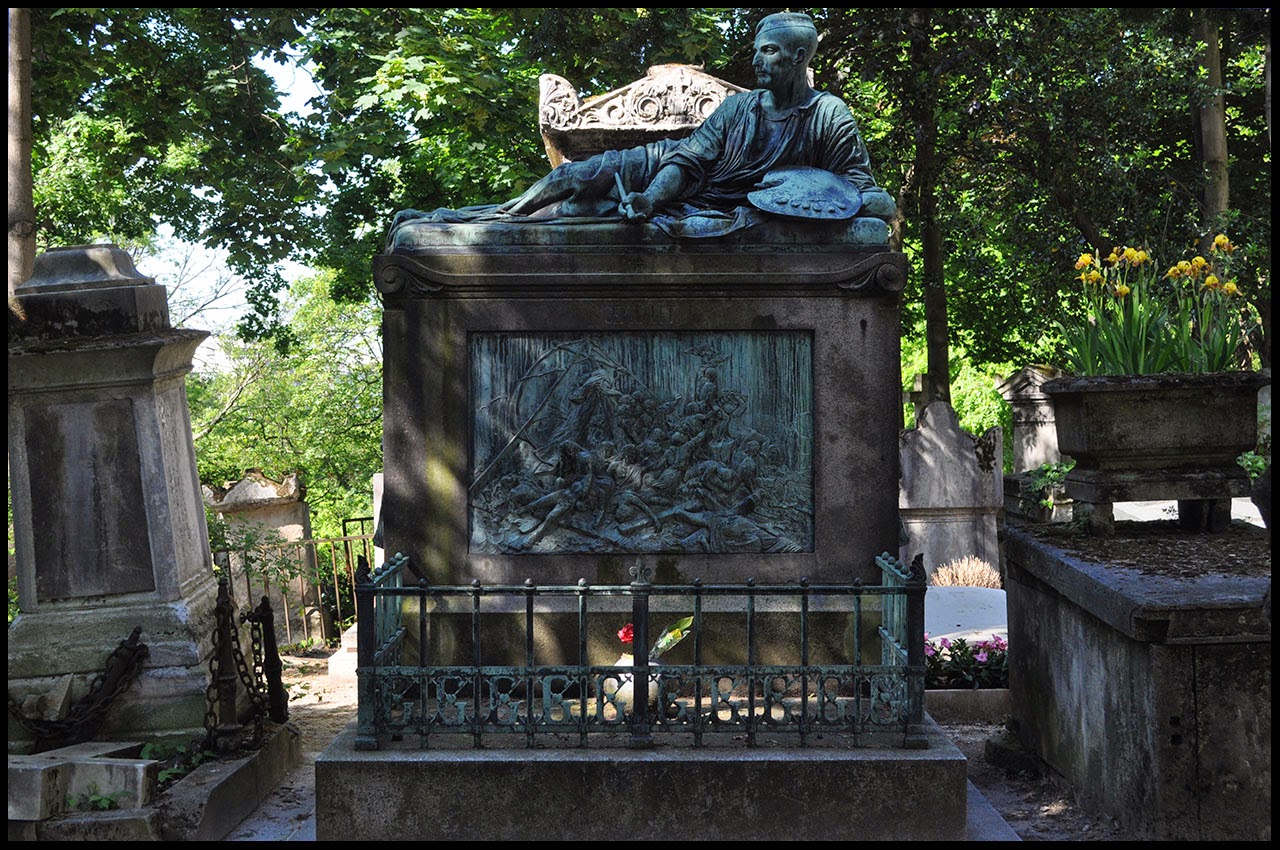 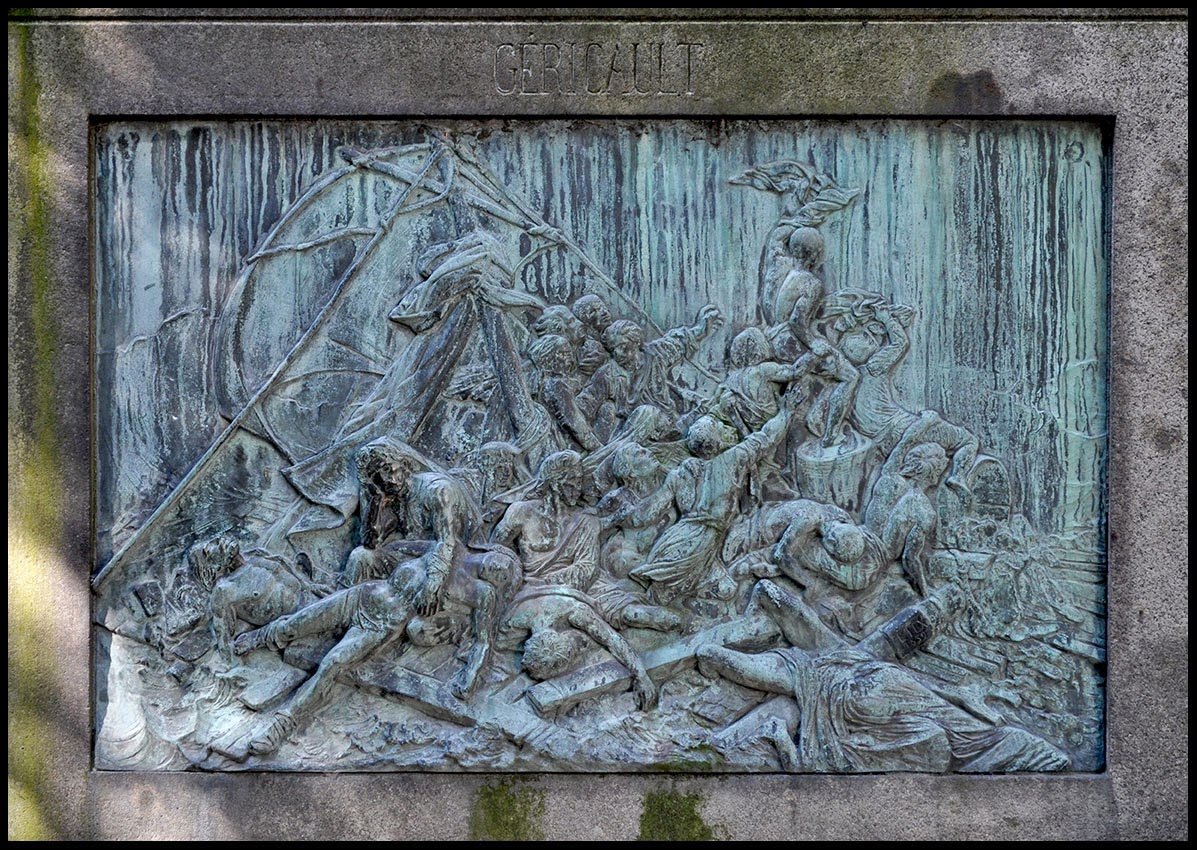 For the full symphony of bereavement we turn to the last resting place of Paul Baudry, an academic painter held in high esteem by his contemporaries whose reputation has not endured. History painting and classical subjects make up most of his surviving work but his real passion was for painting rear views of reclining female nudes with classical credentials to silence the prudish. The disembodied and moustachioed head of the artist rises from a plinth, cradled by an angel’s wing while a female figure, shrouded in mourning, sobs in silent despair at the base of the structure. What seemed appropriate and fitting in 1886 now appears disproportionate, extravagant and absurd in the light of history’s revaluation. 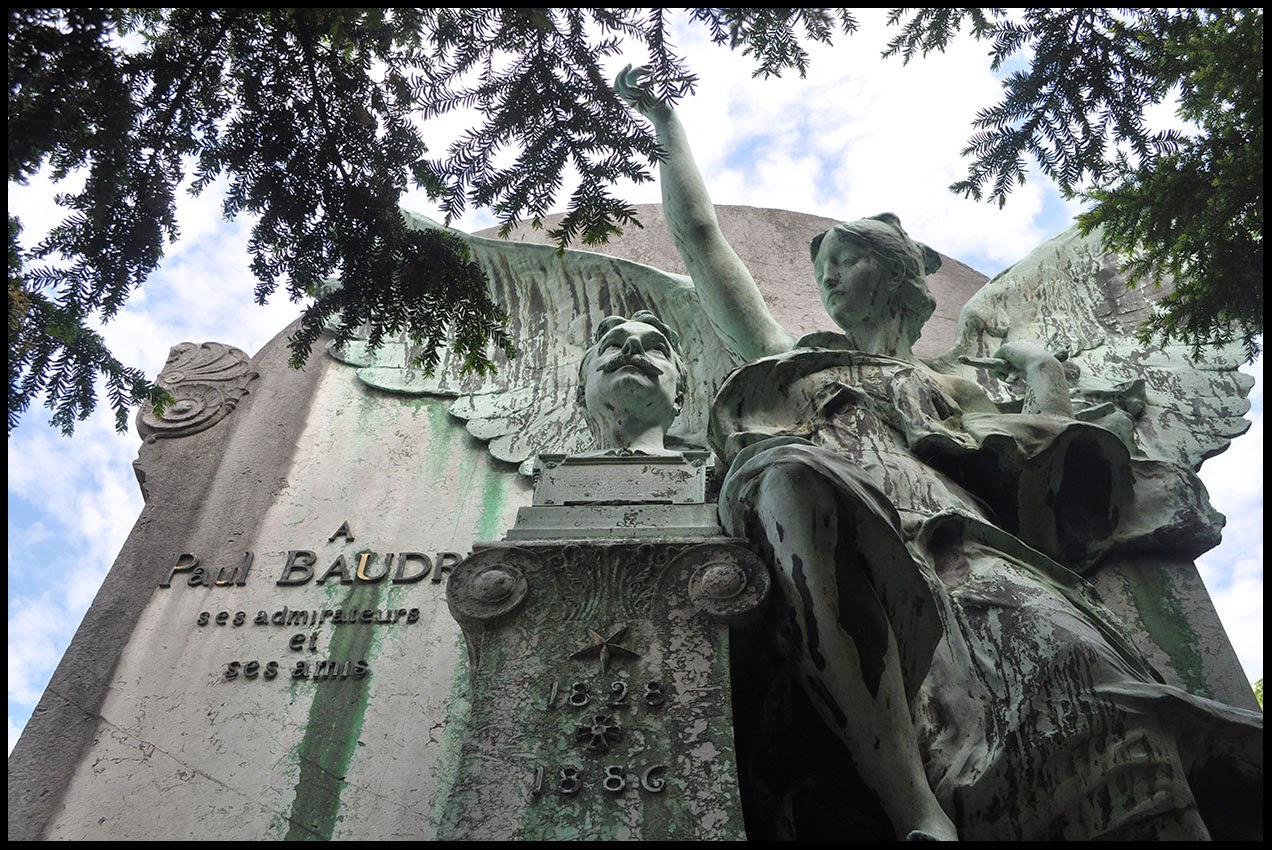 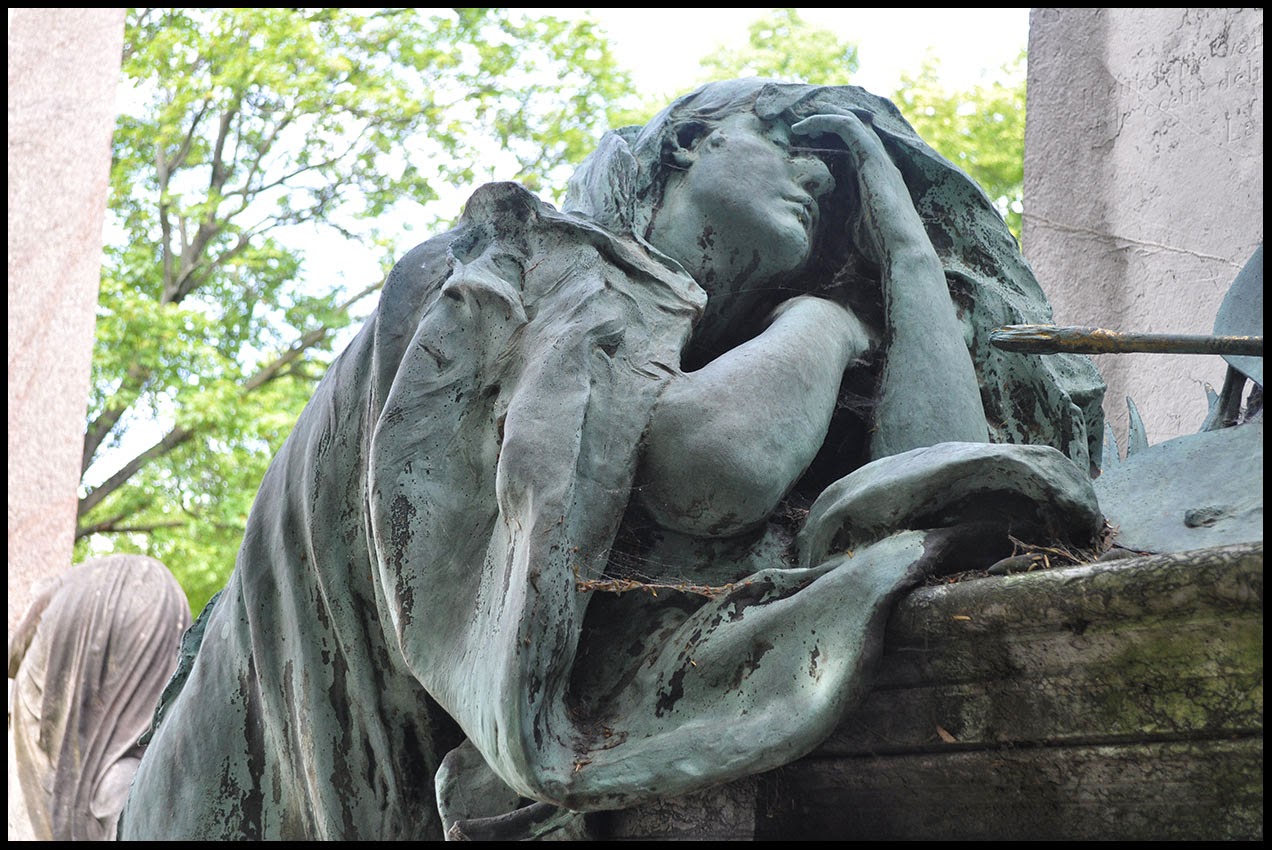 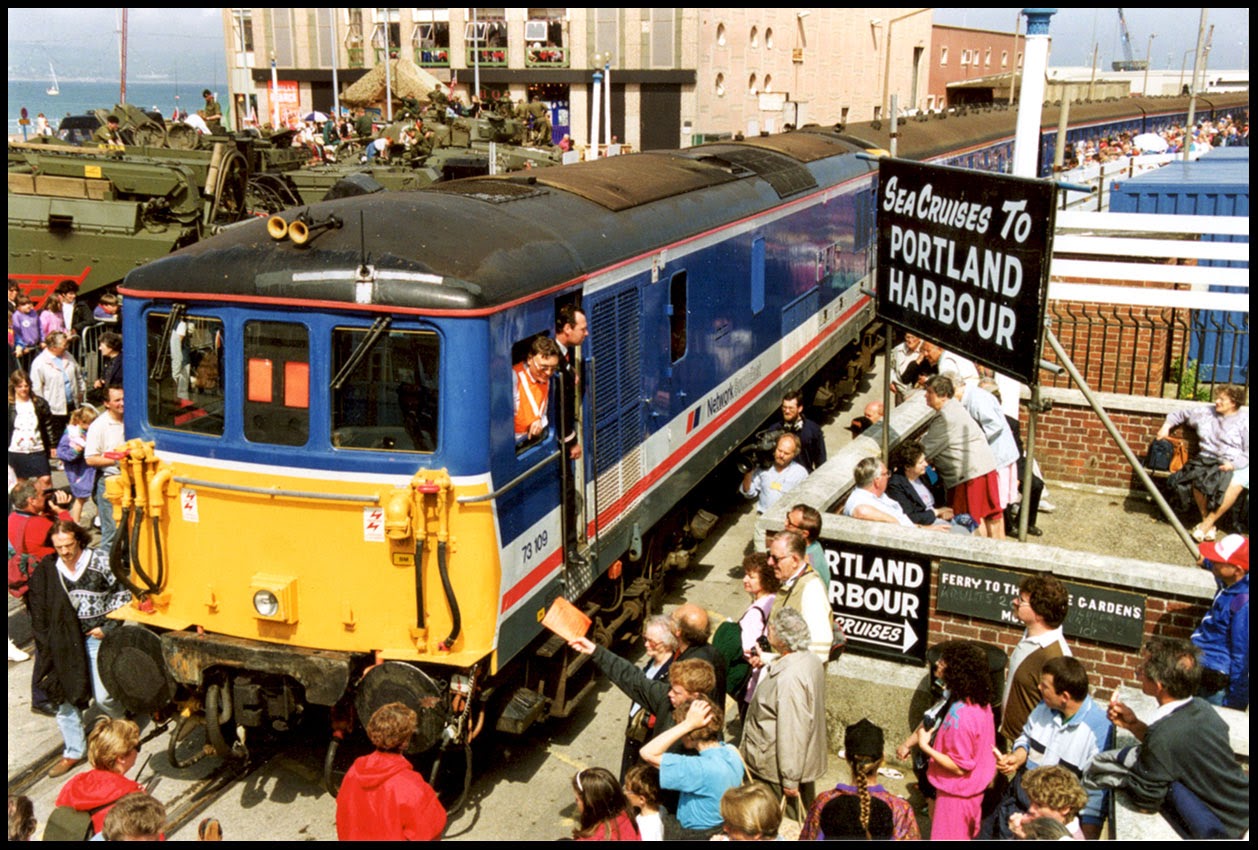 Twenty years to the day have passed since these photos were taken on this date in 1994. This special train, which originated at Waterloo, was conveying US Veterans of the Second World War and the invasion of Normandy to the quayside at Weymouth as part of the 50th. anniversary of D-Day commemorations. A US aircraft carrier was moored offshore and landing craft were on hand to re-enact troop landings on the beach. Until 1987 there were regular trains on this route taking passengers to the Channel Island ferries at the Town Quay. After 1987 only special trains or charter trains for enthusiasts made the journey. Most of the route is along the public highway and trains were preceded by railway staff with flags to ensure the track was free of obstructions. Motorists were especially affronted at having to yield road space to an inferior form of transport. This kind of street-running is common in the US but in Britain it’s very unusual. Railway administrators hate anomalies and there have been many attempts to close it down. In the end it has been allowed to wither away – no train has passed since 1999 and it’s impossible to envisage another doing so in future. The spectacle of these full size trains inching their way through the back streets of Weymouth is unlikely to be repeated. Unsurprisingly, on the day of the special train the locomotive broke down on the return trip and after a long delay a replacement was procured to take it on its weary way. 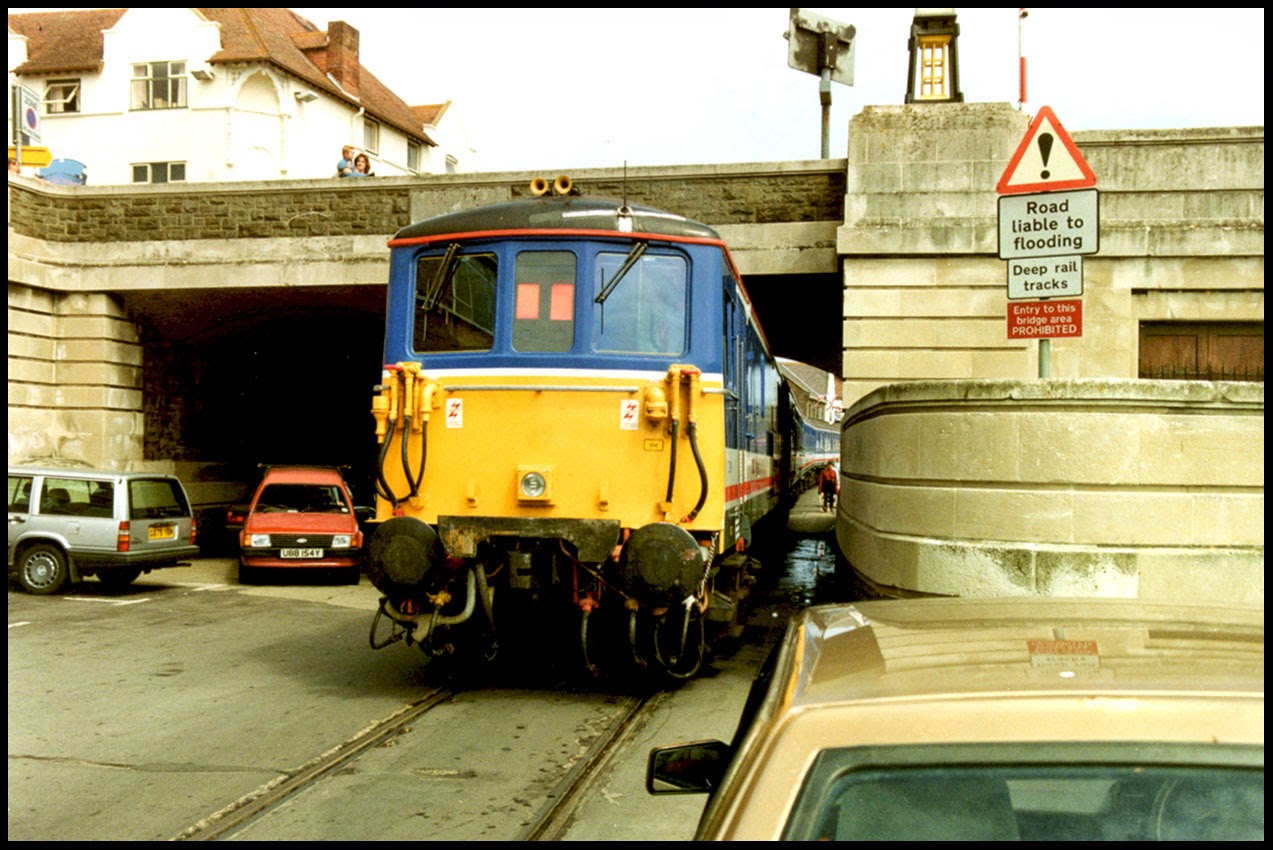 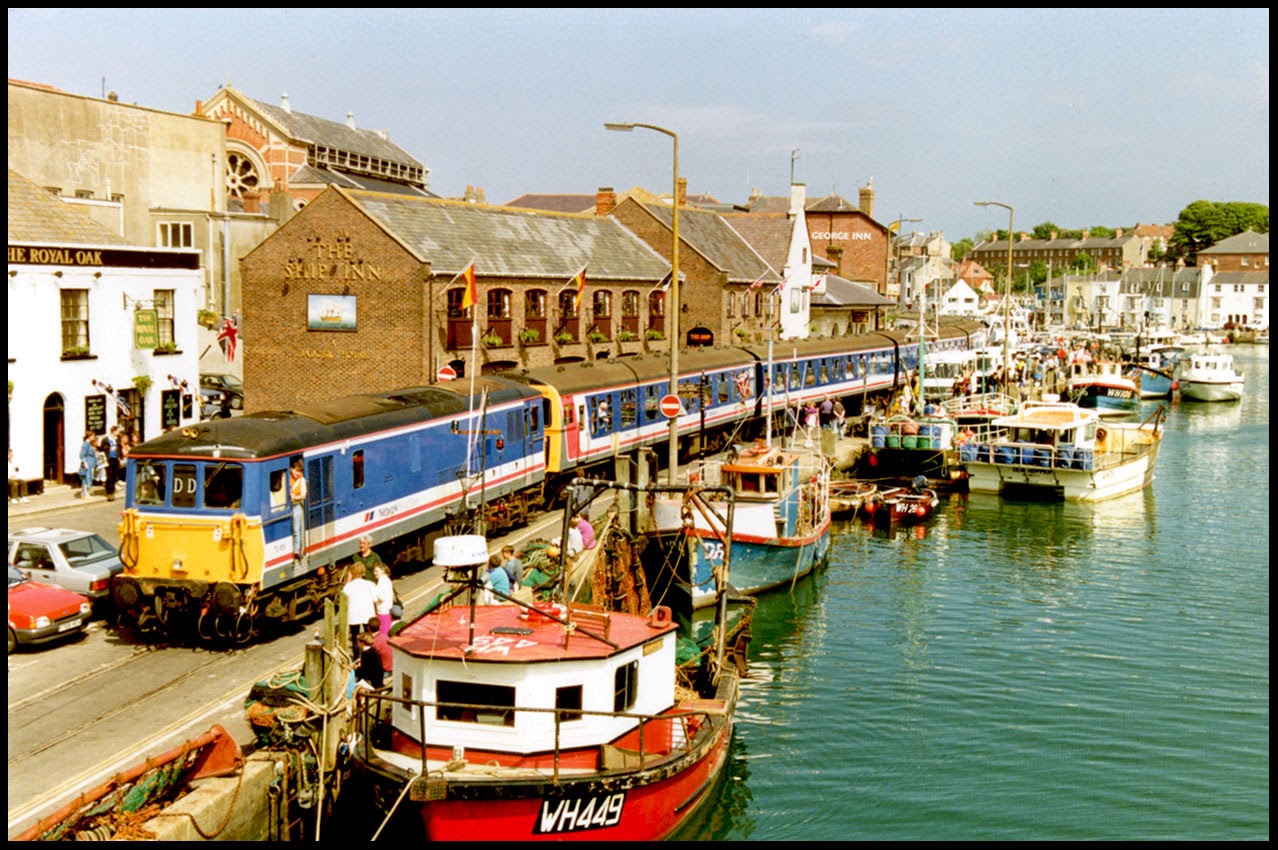 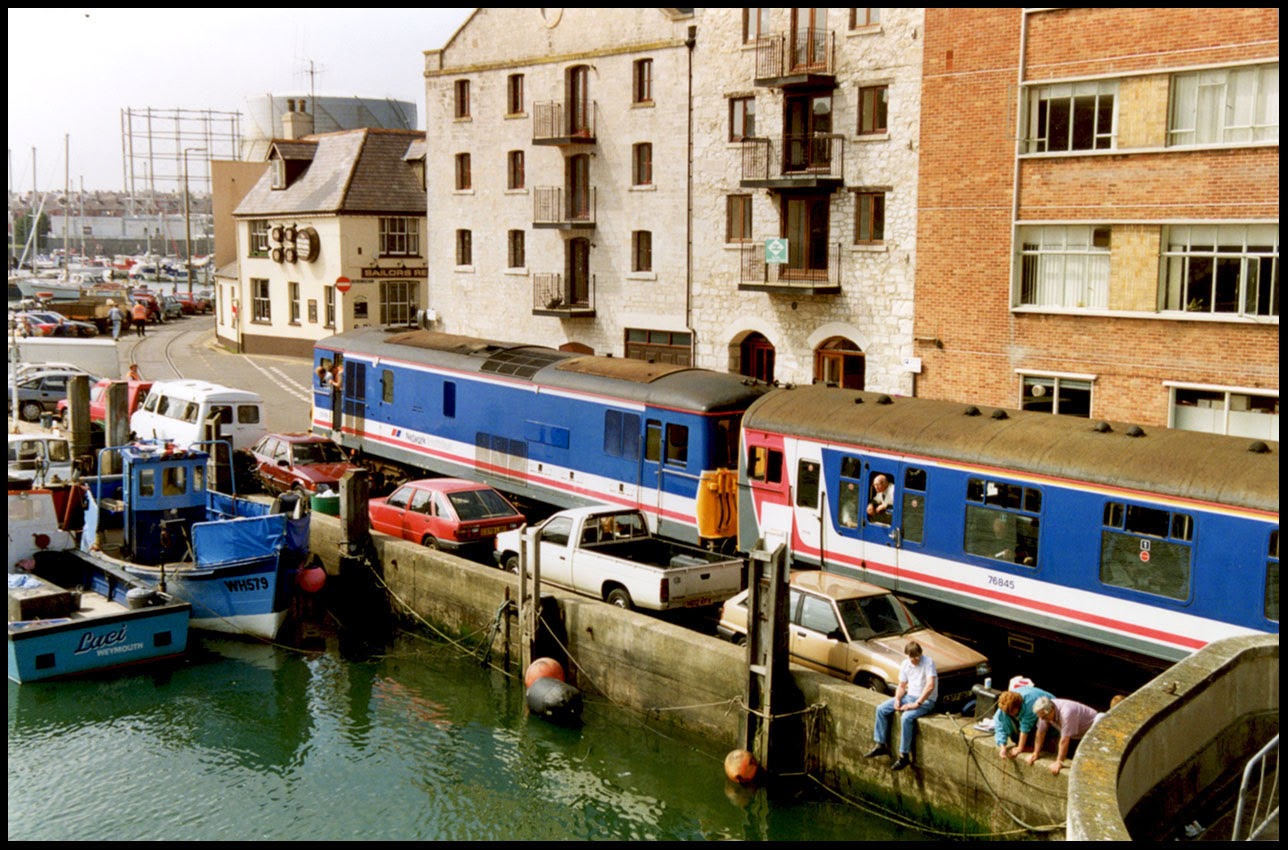 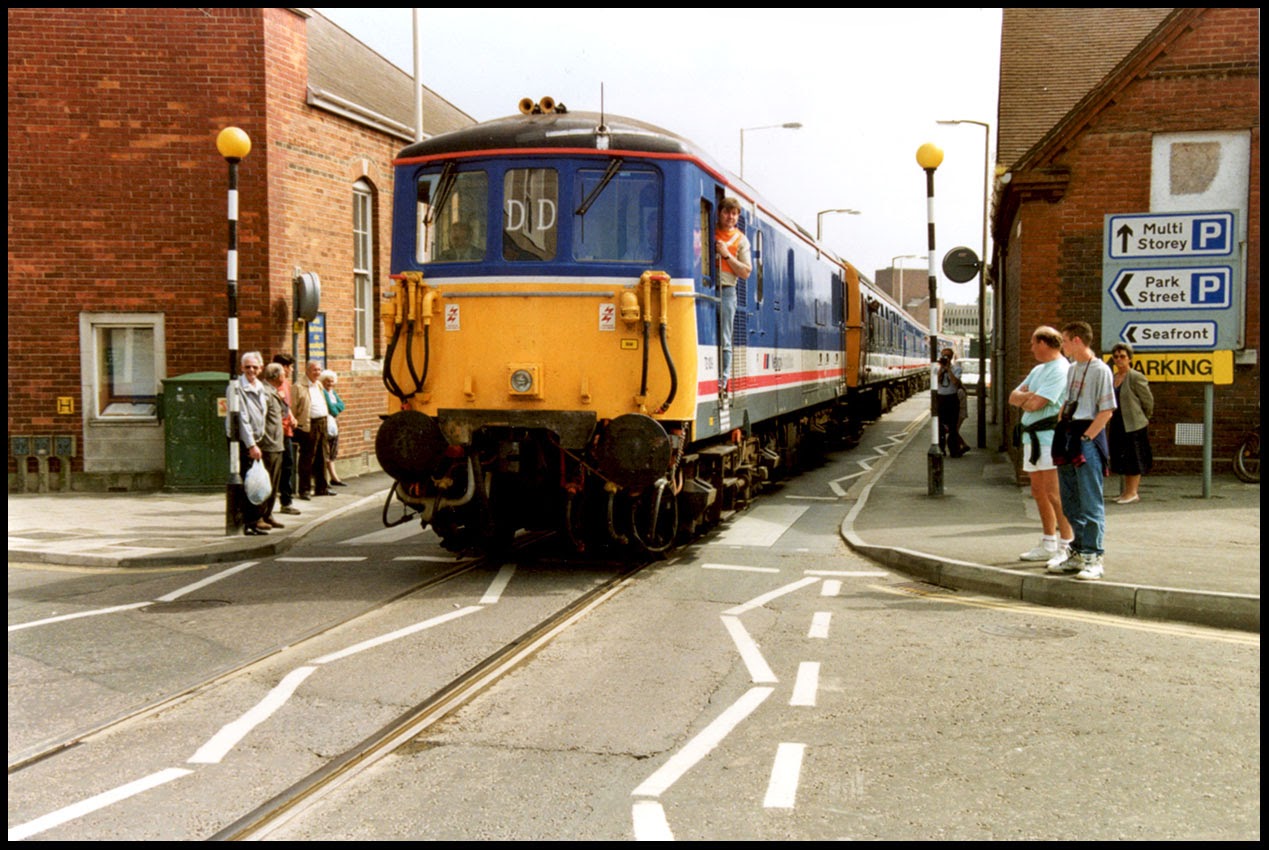 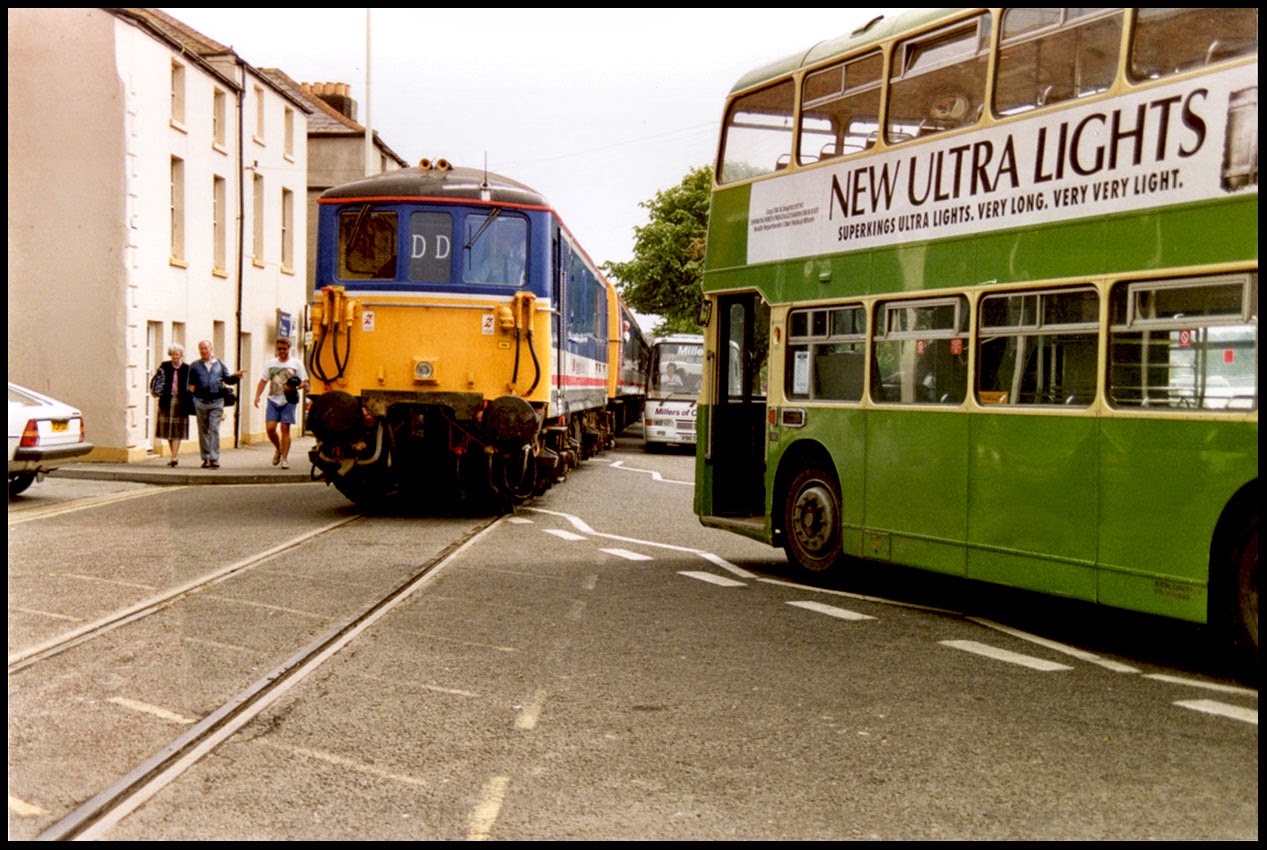 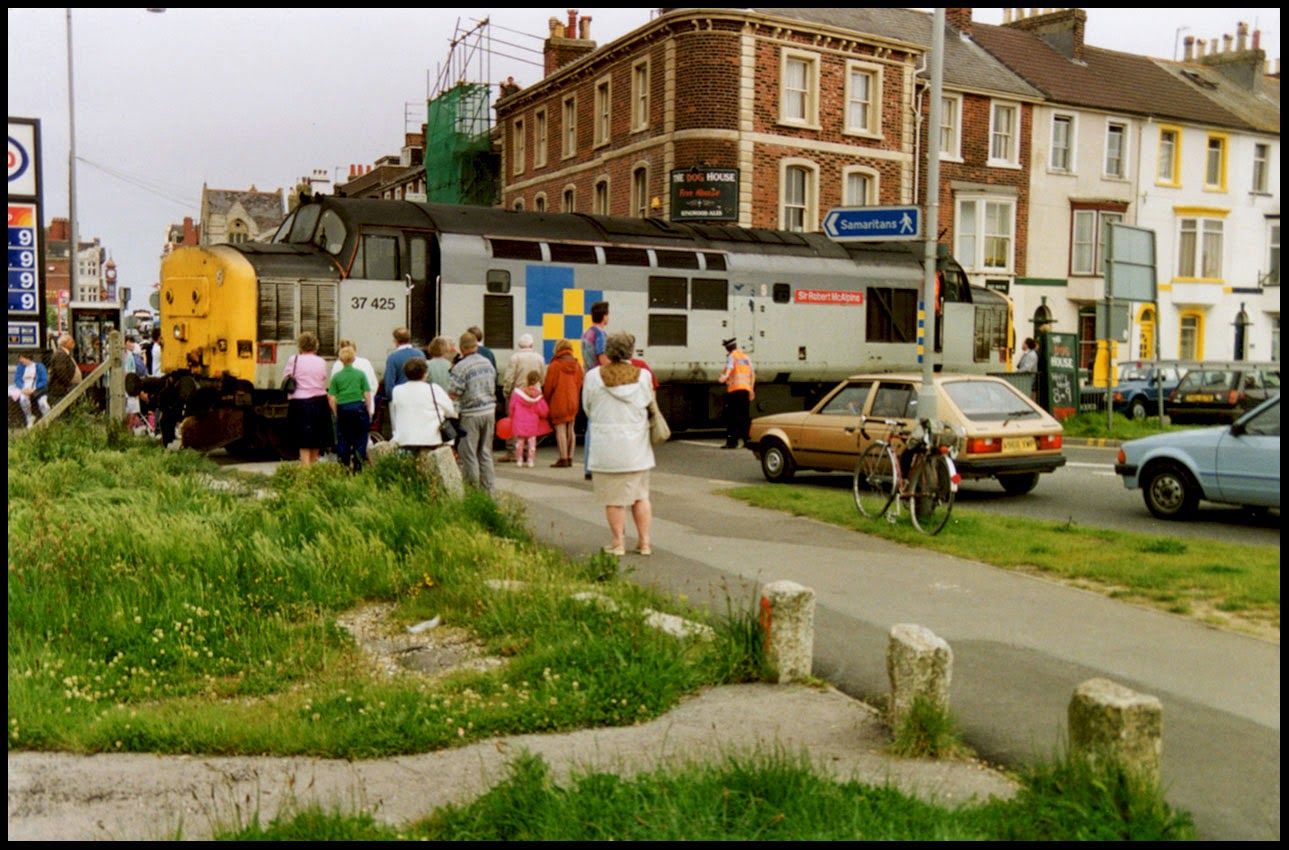 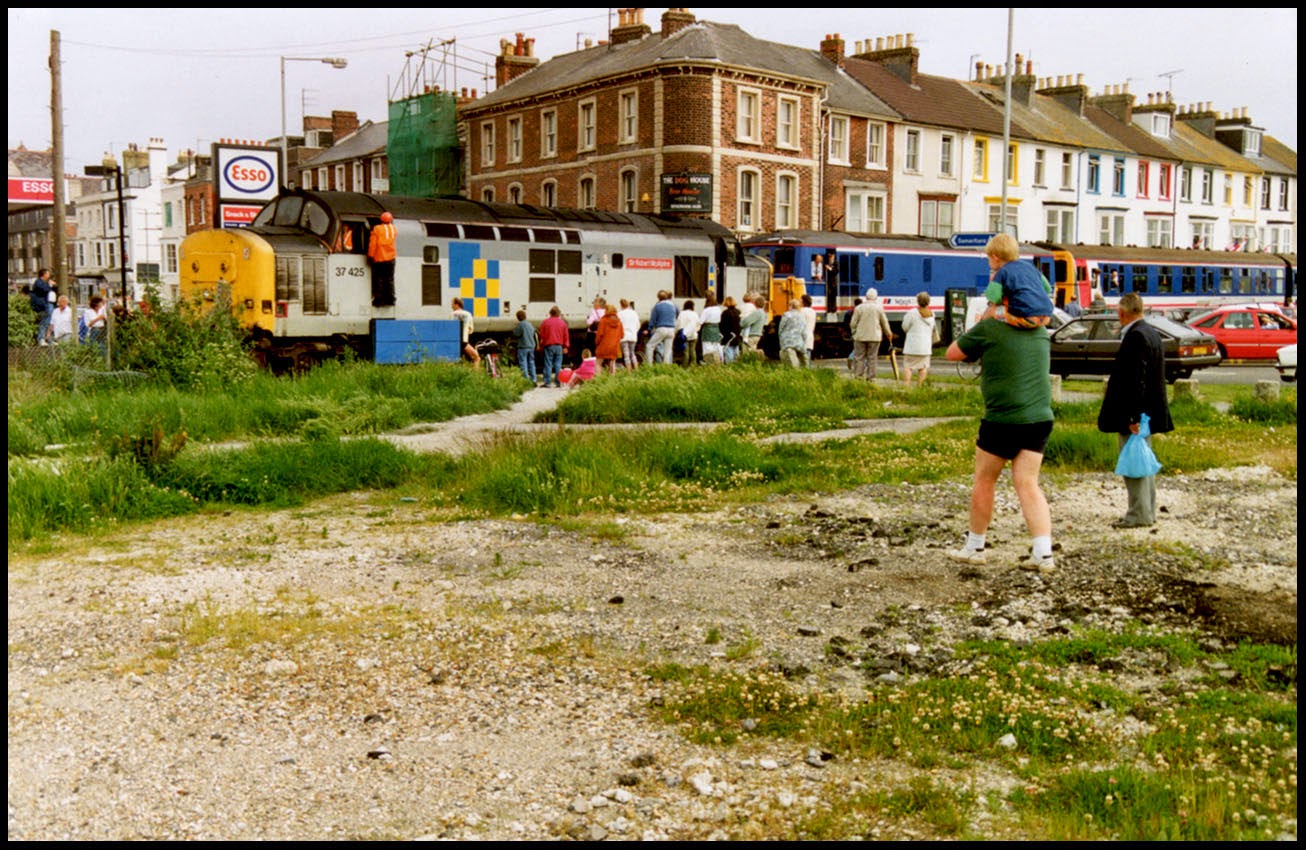