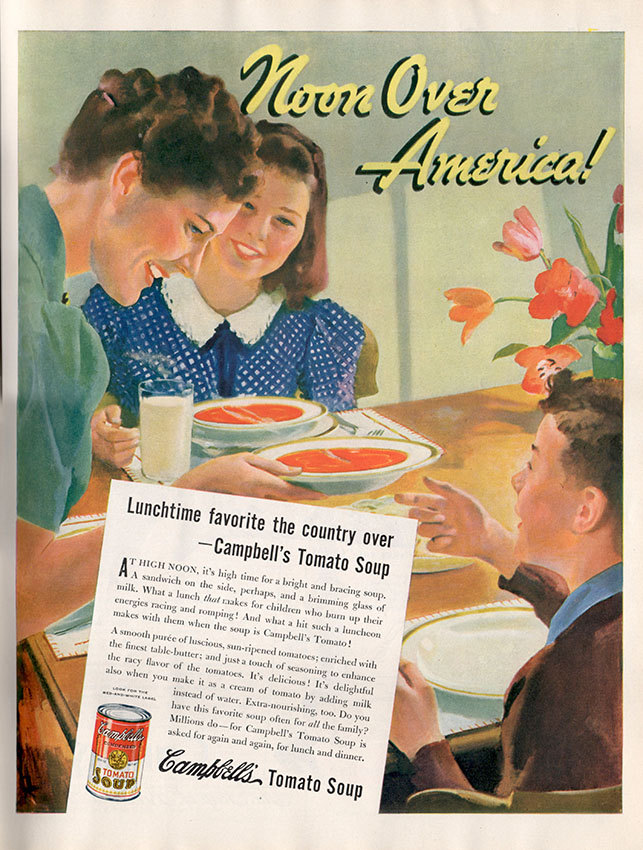 Campbell’s Soup was one of the most assiduous advertisers in America’s mass-circulation magazines and where possible would purchase the first page after the editorial content for their ads. Their prime target was the hard-pressed Great American Mom for whom the daily task of feeding hungry, boisterous and hard-to-please children was an eternal source of despair. Campbell’s offered a simple solution in the form of heat and serve cans of condensed soup in which the nutritional benefits of vitamins and protein were supplied in an easily absorbed liquid slurry. Rebuilding energy levels for the challenges of the afternoon had never been easier. Only 4 minutes from shelf to table and even the most fractious child is calm and content. Implicit in these messages was the idea that all mothers could mold their offspring into healthy, happy, high-achieving youngsters. Transformed into bright and smiling paragons of virtue with dazzling white teeth to match. 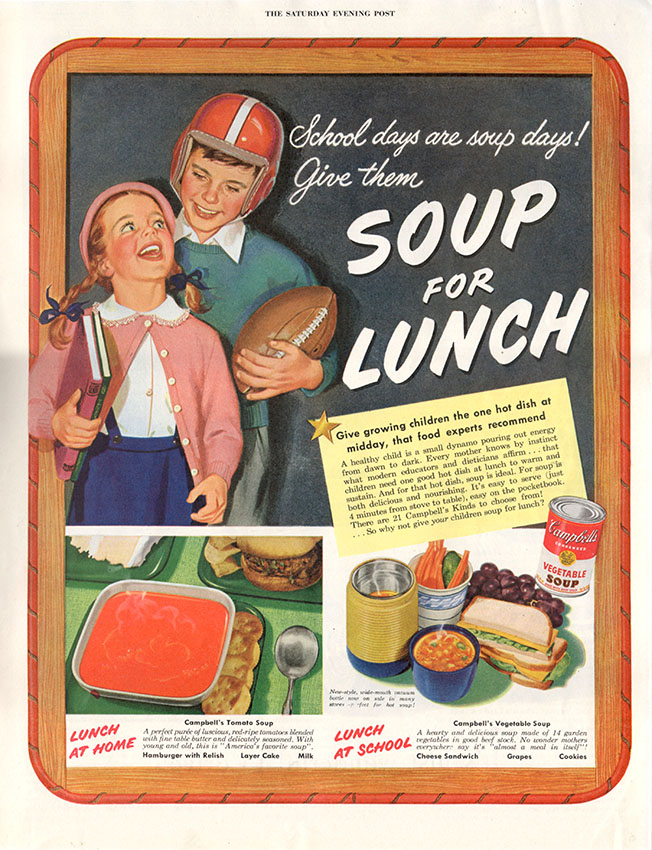 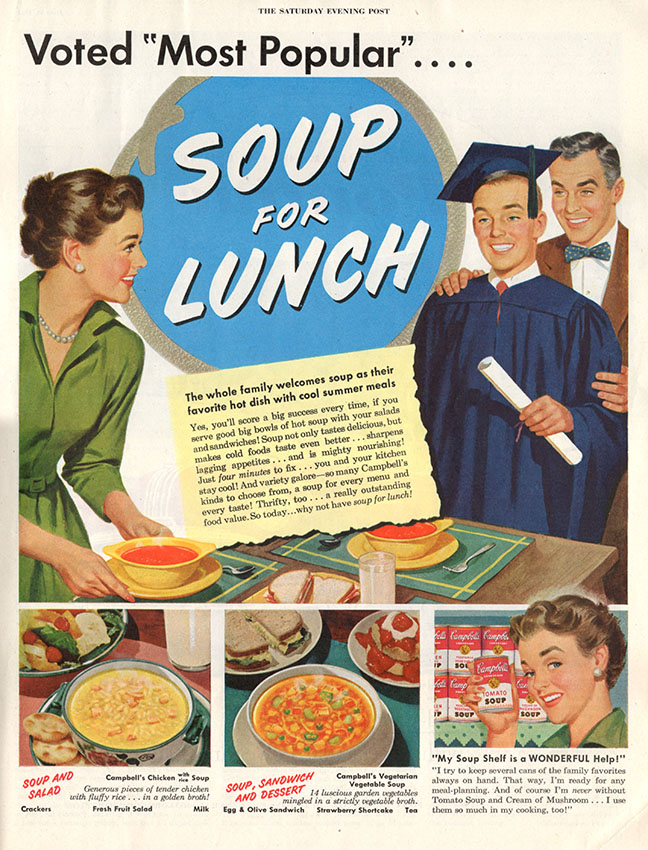 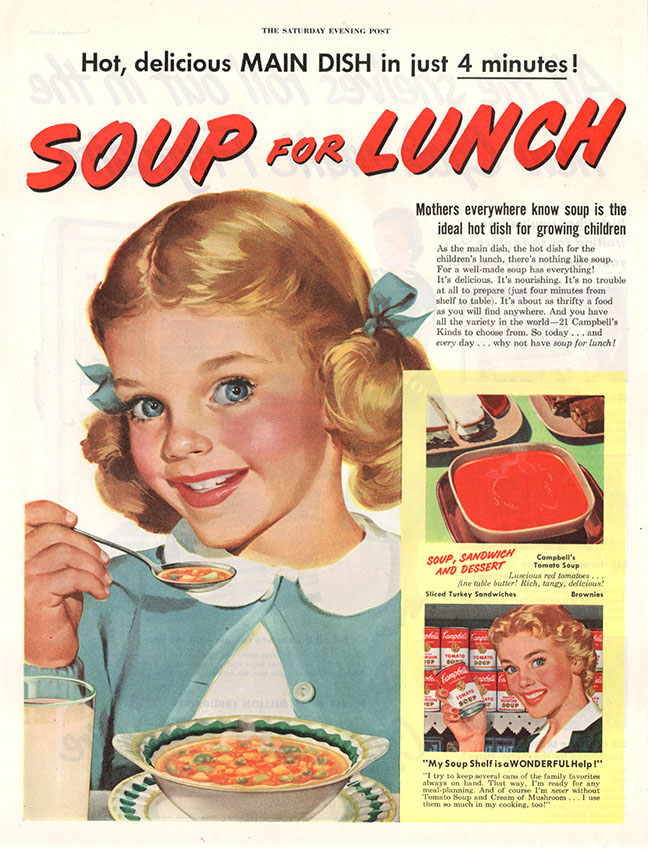 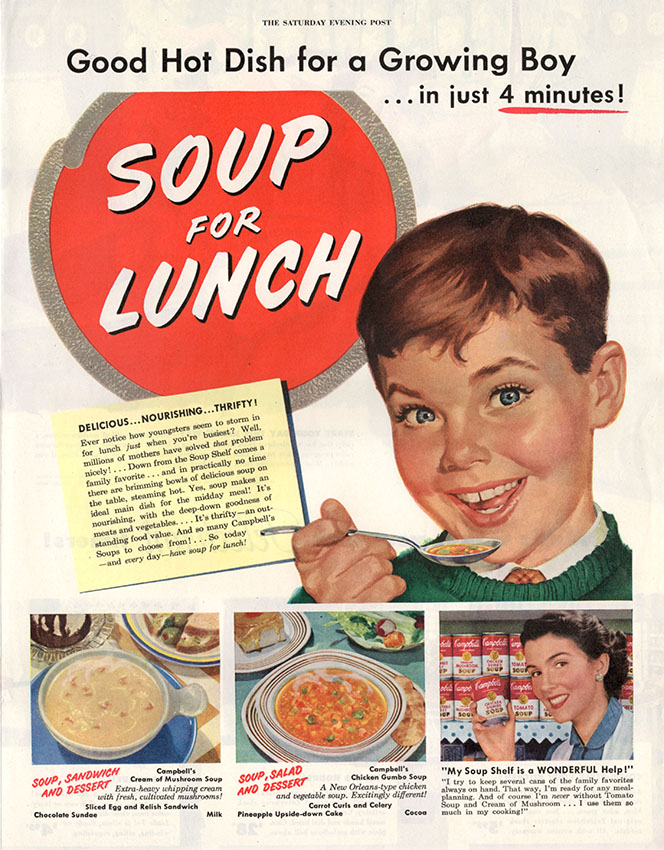 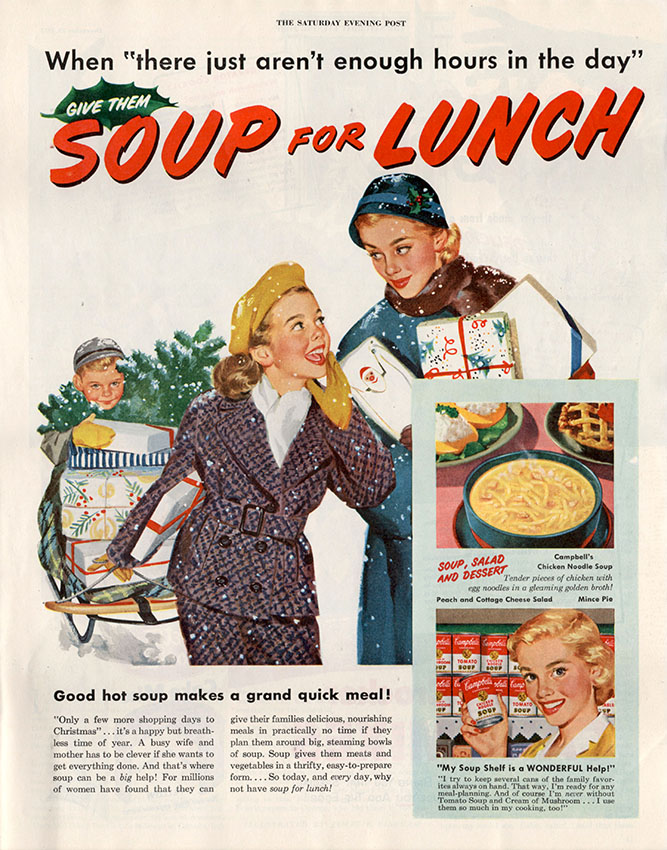 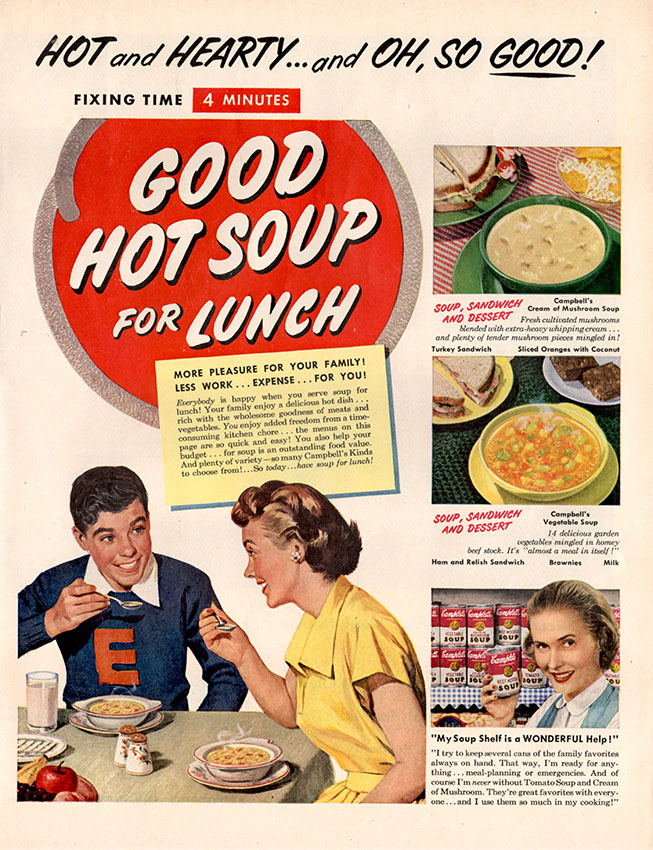 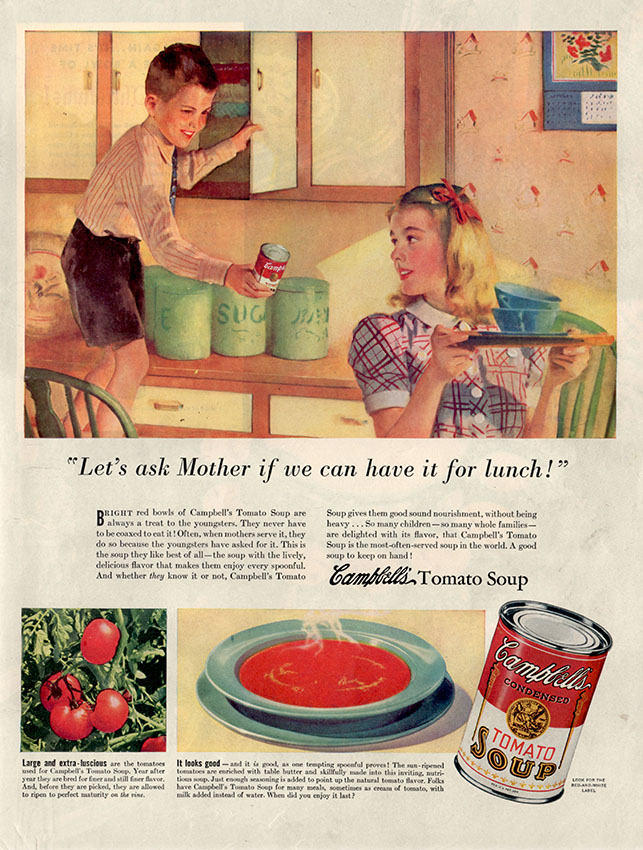 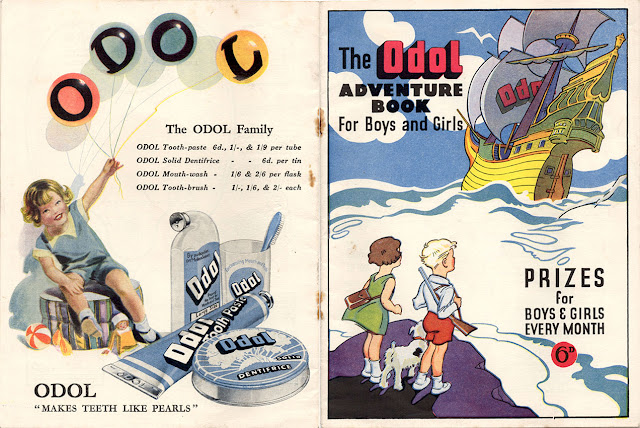 Odol mouthwash is a German product originating in Dresden in 1892. Sales expanded rapidly, assisted by an exceptionally high expenditure on advertising and promotion. By the 1930s it was on sale in more than 20 countries, including Britain and the US, where Stuart Davis made it the subject of a painting in 1924. The ad below appeared in India in 1931, reassuring the customer that Odol will destroy typhoid germs in less than a minute. Odol survives as a leading brand in Germany today in the ownership of GlaxoSmithKline. 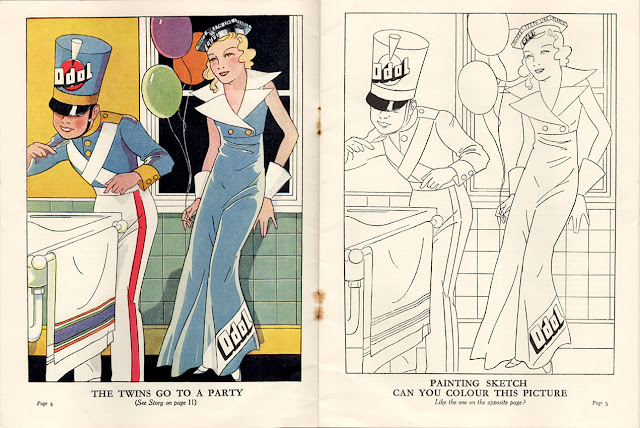 The tradition of handing out small format picture story books free of charge to children was established at the end of the 19th. century as businesses such as Colman’s Mustard learned the value of indirect publicity. The makers of Odol, feeling less generous, priced their series of picture books at sixpence. A brave or foolish move considering that the highest priority on every page was to place Odol at the centre of attention. As well as a story, the book offered a paper plane, colouring pages, cut-out and keep toy soldiers for deployment in the war against decay, an ever-popular “What’s Wrong With These Pictures?” feature and much good advice on dental hygeine. Production values were better than average but whether it represented value for money is not so easy to say. 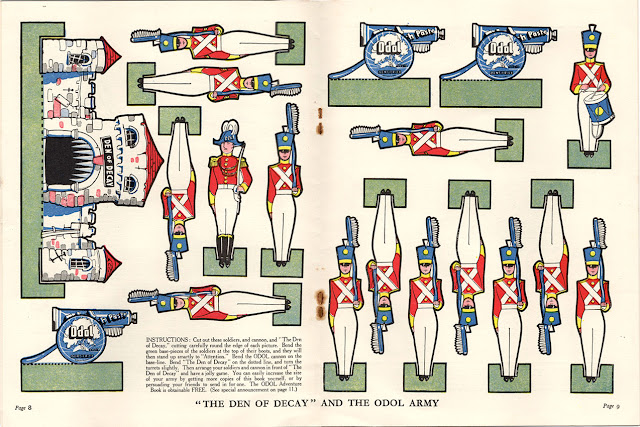 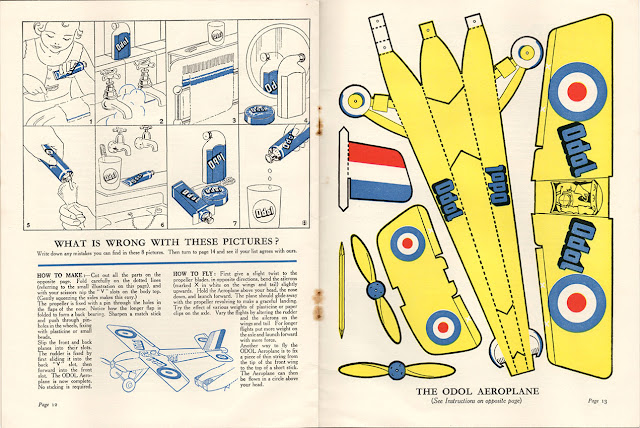 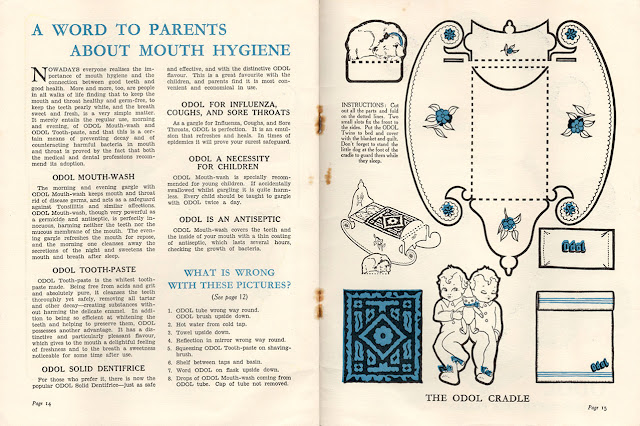 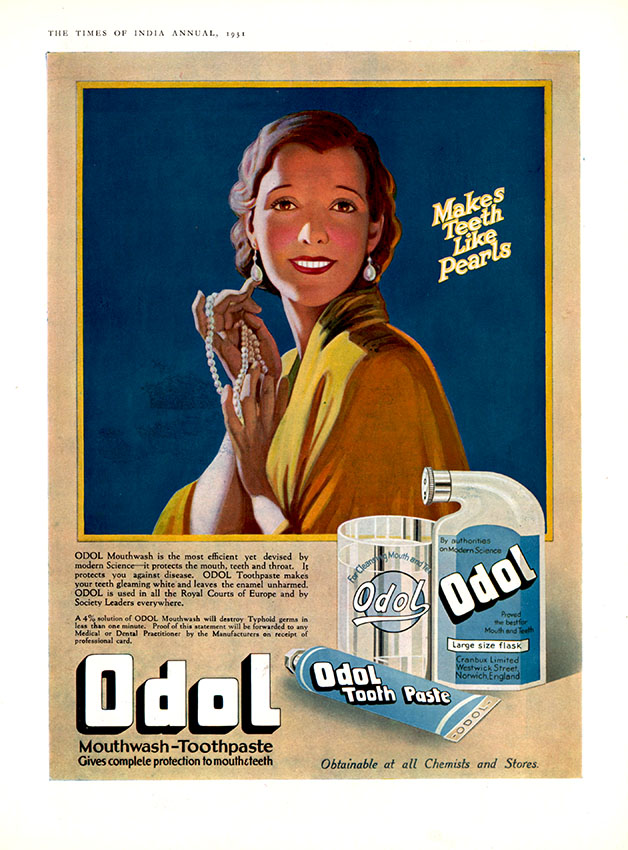