Postcard of the Day No. 67, Tex the Trainer 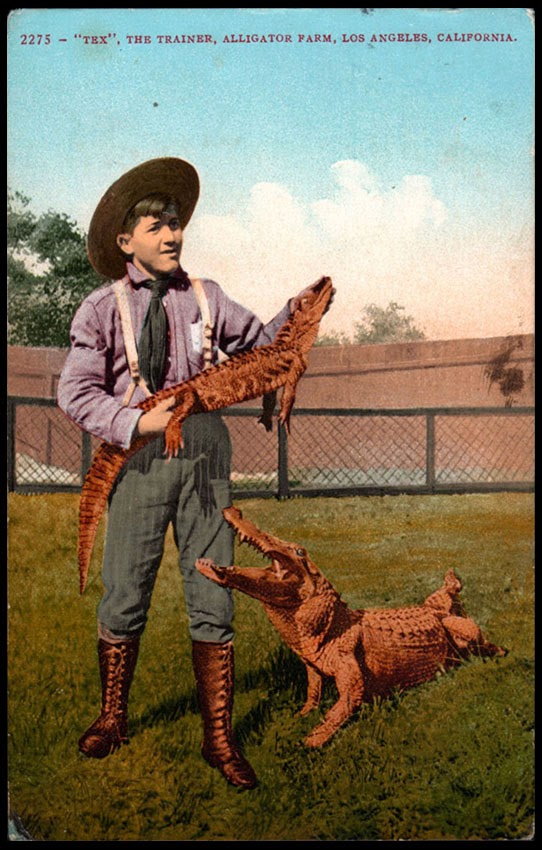 Meet Tex the Trainer, resplendent in shiny lace-up boots, necktie and suspenders. Tex makes light of his celebrity status as he demonstrates his technique for suppressing the natural instincts of these fearsome carnivores. These reptiles were placed on earth 37 million years ago to add to the sum of human happiness by making themselves available for inspection by paying customers on purpose-built reservations, often called ranches or farms. And when their performing days are over they generously donate their skins to be made up into shoes for pimps or handbags for whores. Repellent, scaly and reptilian, with a formidable reputation for unprovoked savagery – they made ideal material for the producers of postcards. Similar businesses can be found today at ranches or farms across the southern USA although, in tune with the times, they are keen to emphasise the conservation value of their activities. 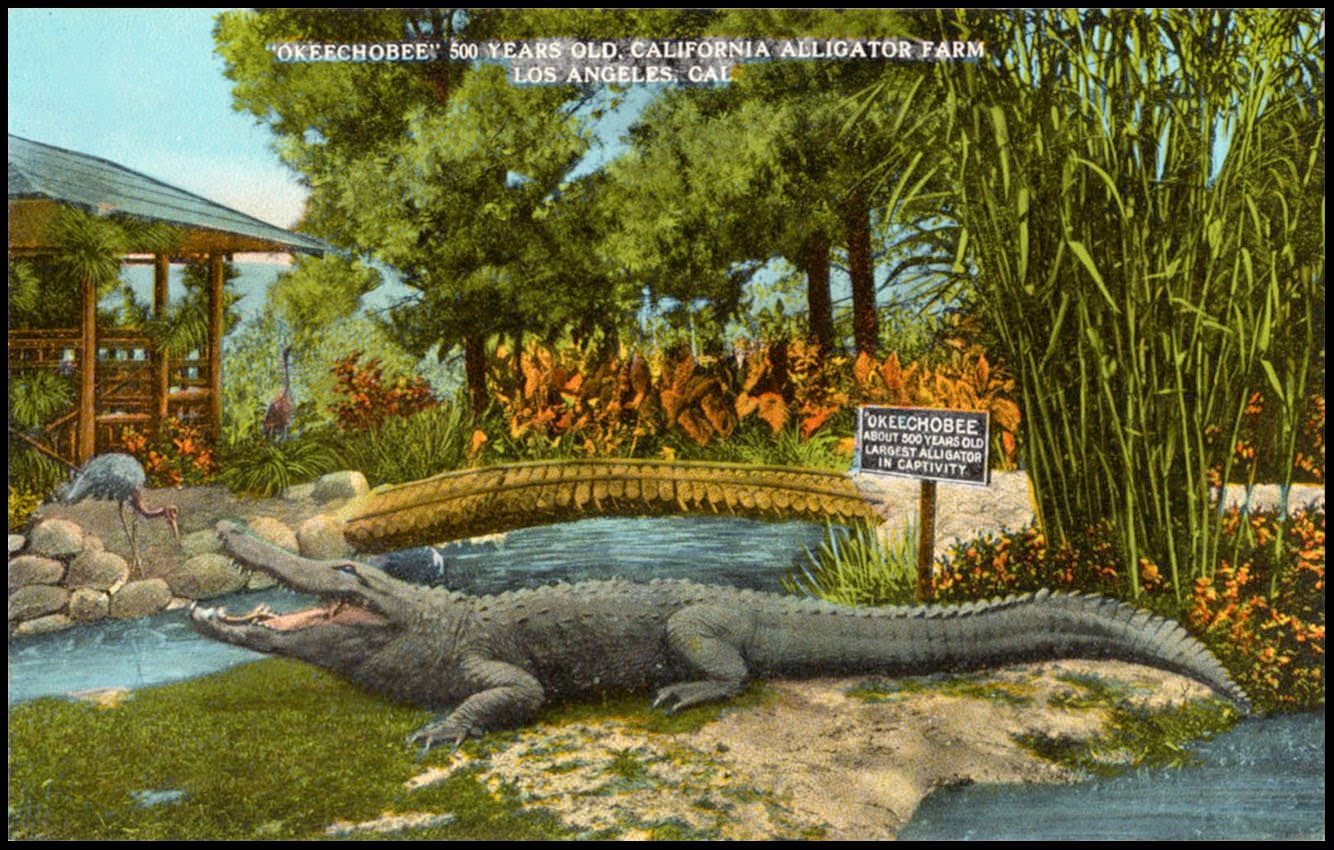 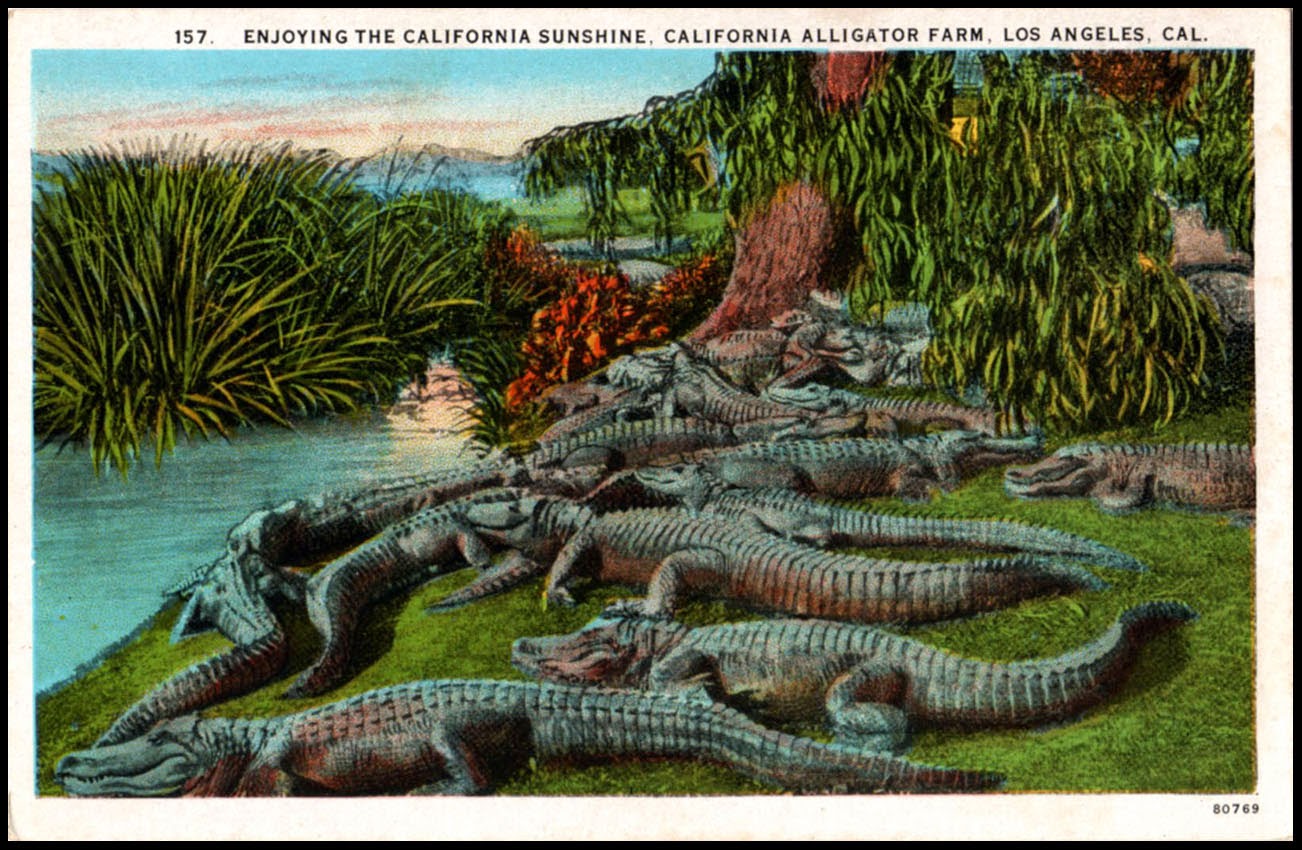 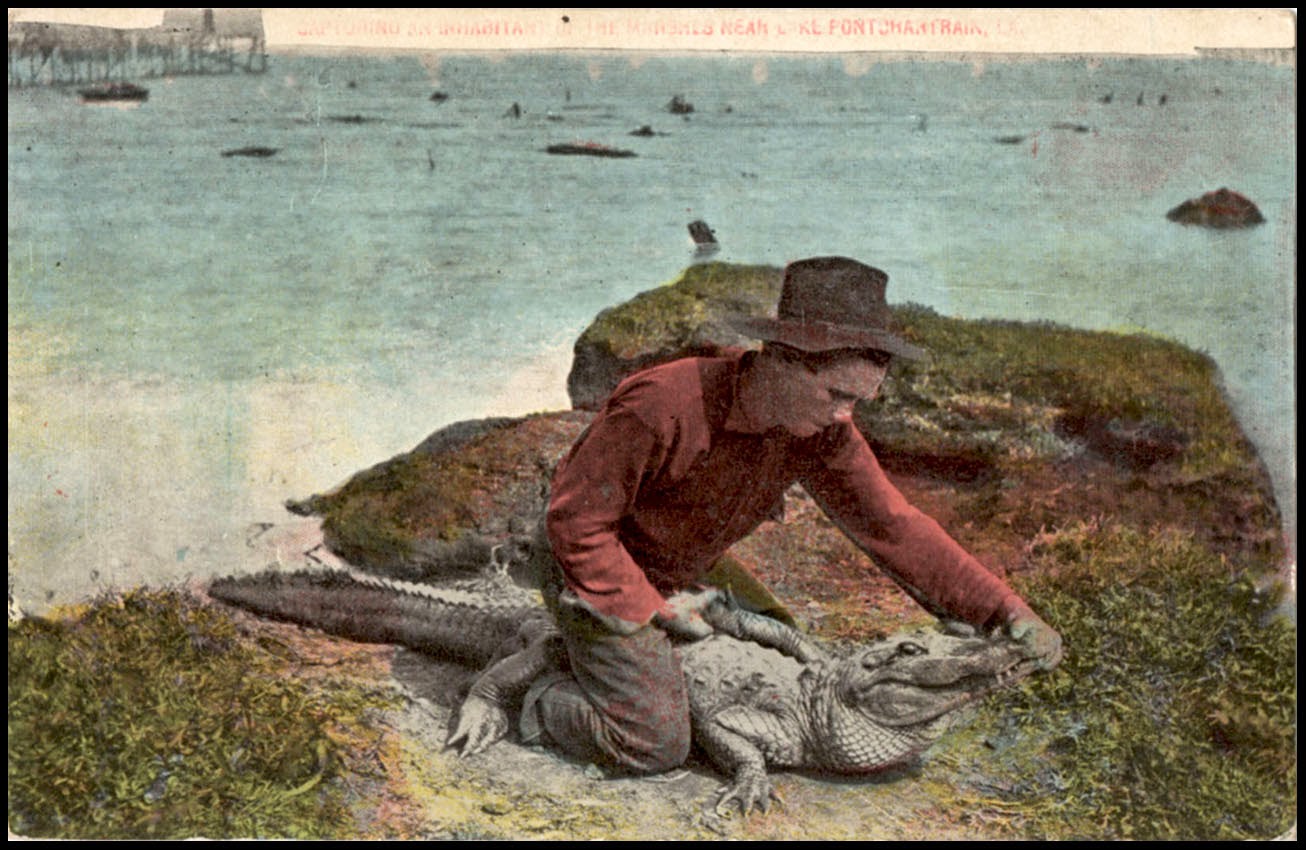 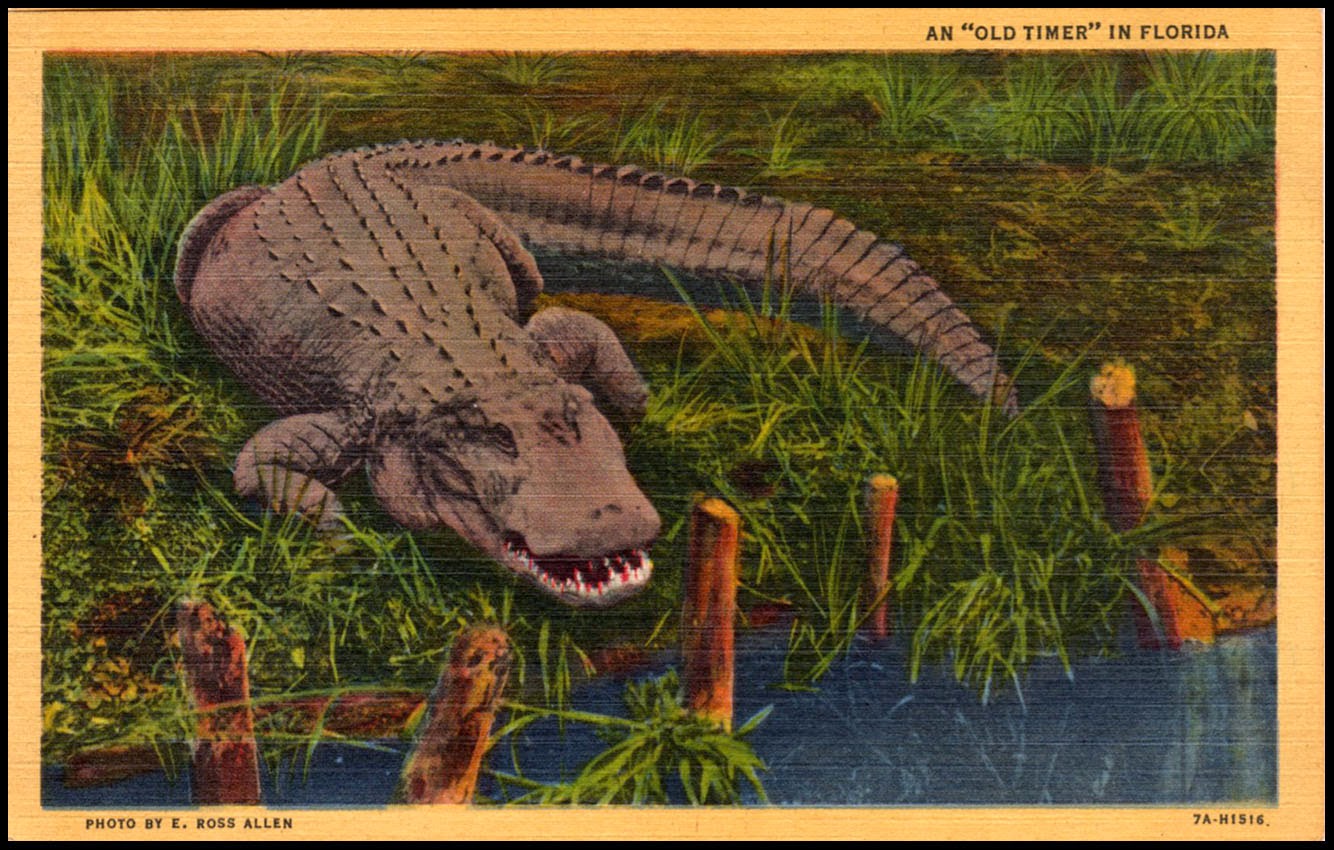 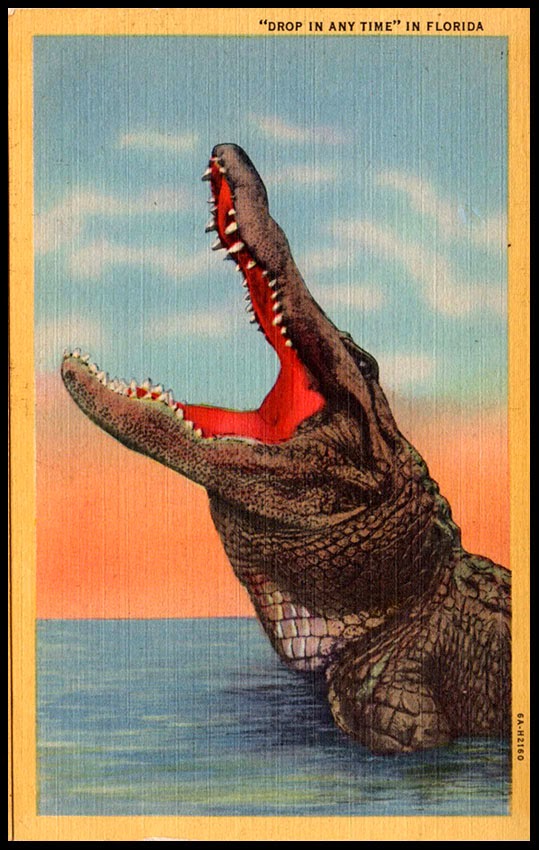 Postcard of the Day No. 66, Cawston Ostrich Farm 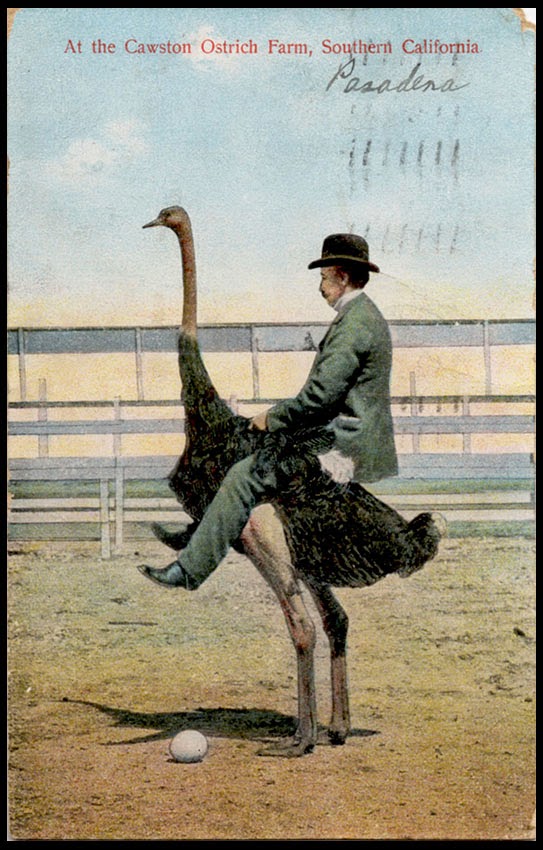 Never a dull moment down at the Ostrich Farm as these postcards show. When they’re not fighting among themselves they’re being encouraged to swallow oranges or forcibly divested of their plumage. Others were pressed into service to take visitors on carriage rides. In the ultimate demonstration of man’s mastery over nature, this ostrich has been mounted by a gent in a Derby hat. The egg looks on in silent reproach. While the ostrich is the more successful in maintaining its dignity. The Cawston Ostrich farm was a visitor attraction in the Los Angeles area for almost 50 years from 1886 until 1935. The world has moved on from this type of exploitation – today’s most lucrative proposition would be an ostrich rescue centre. 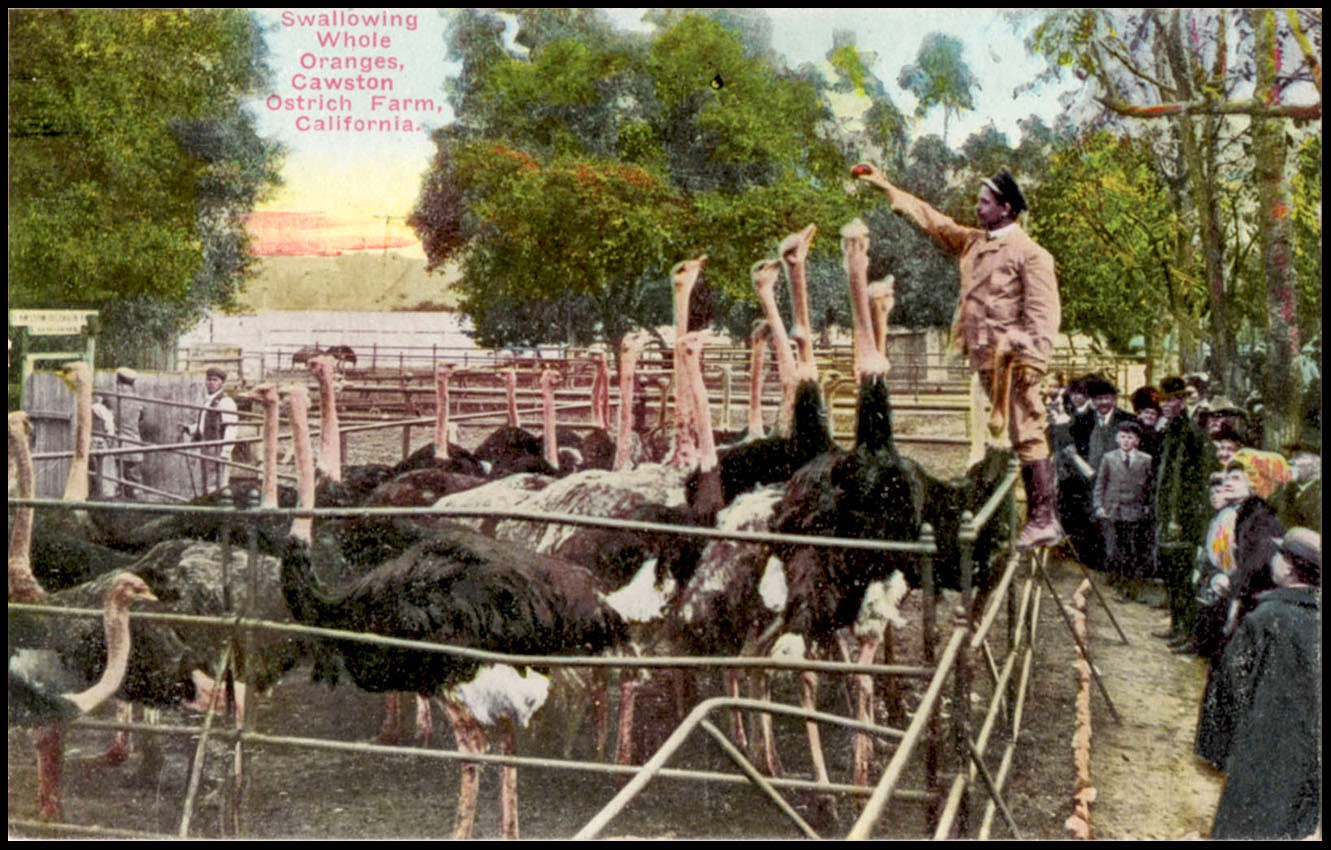 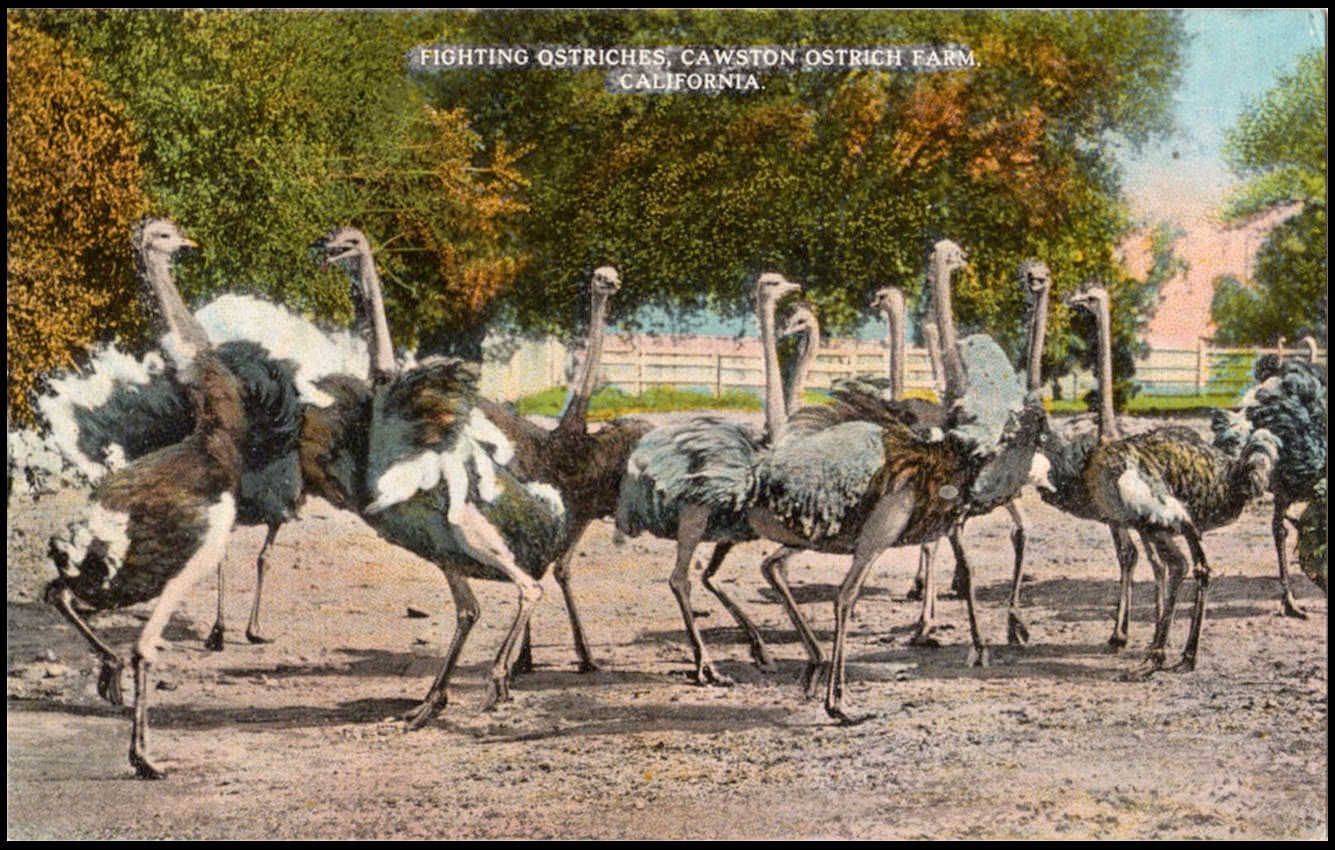 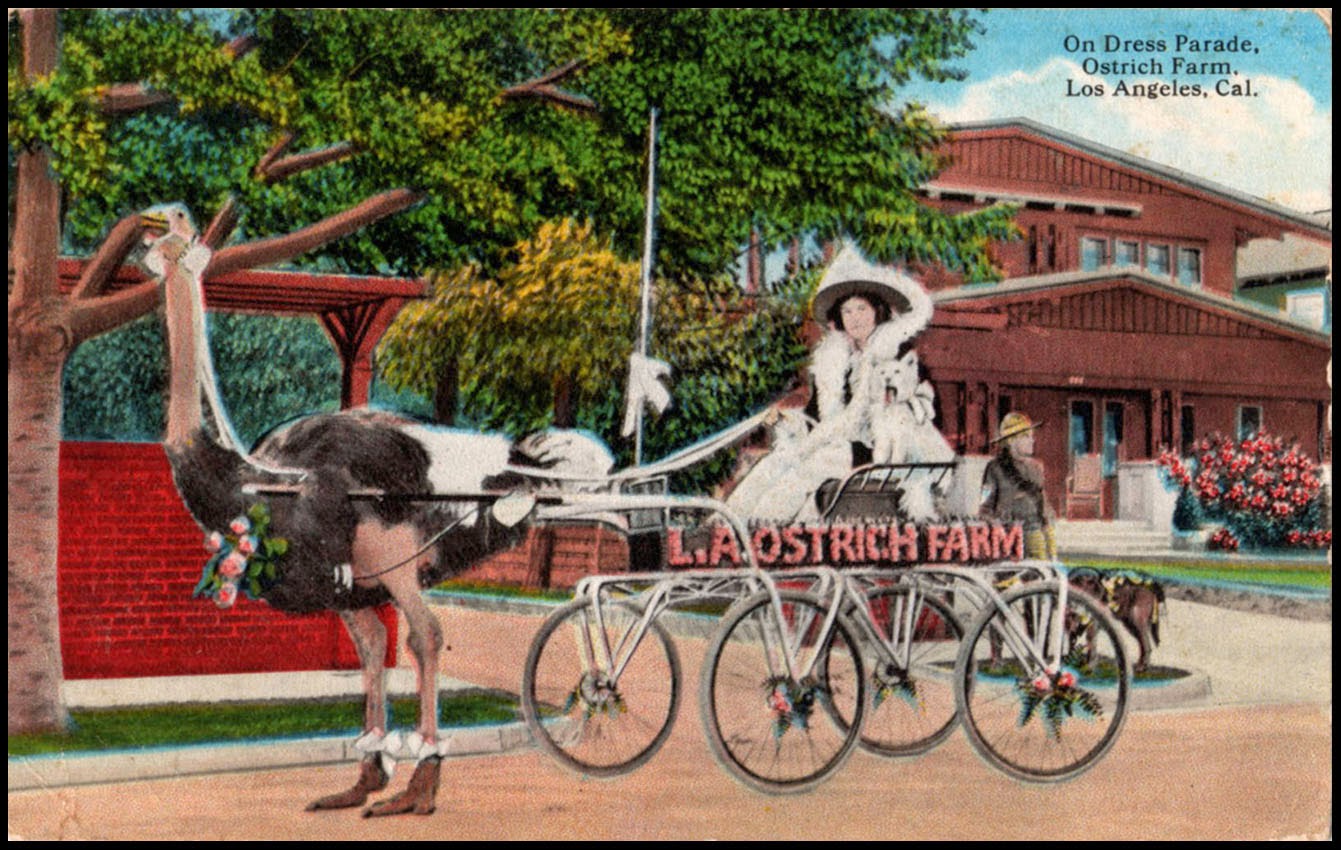 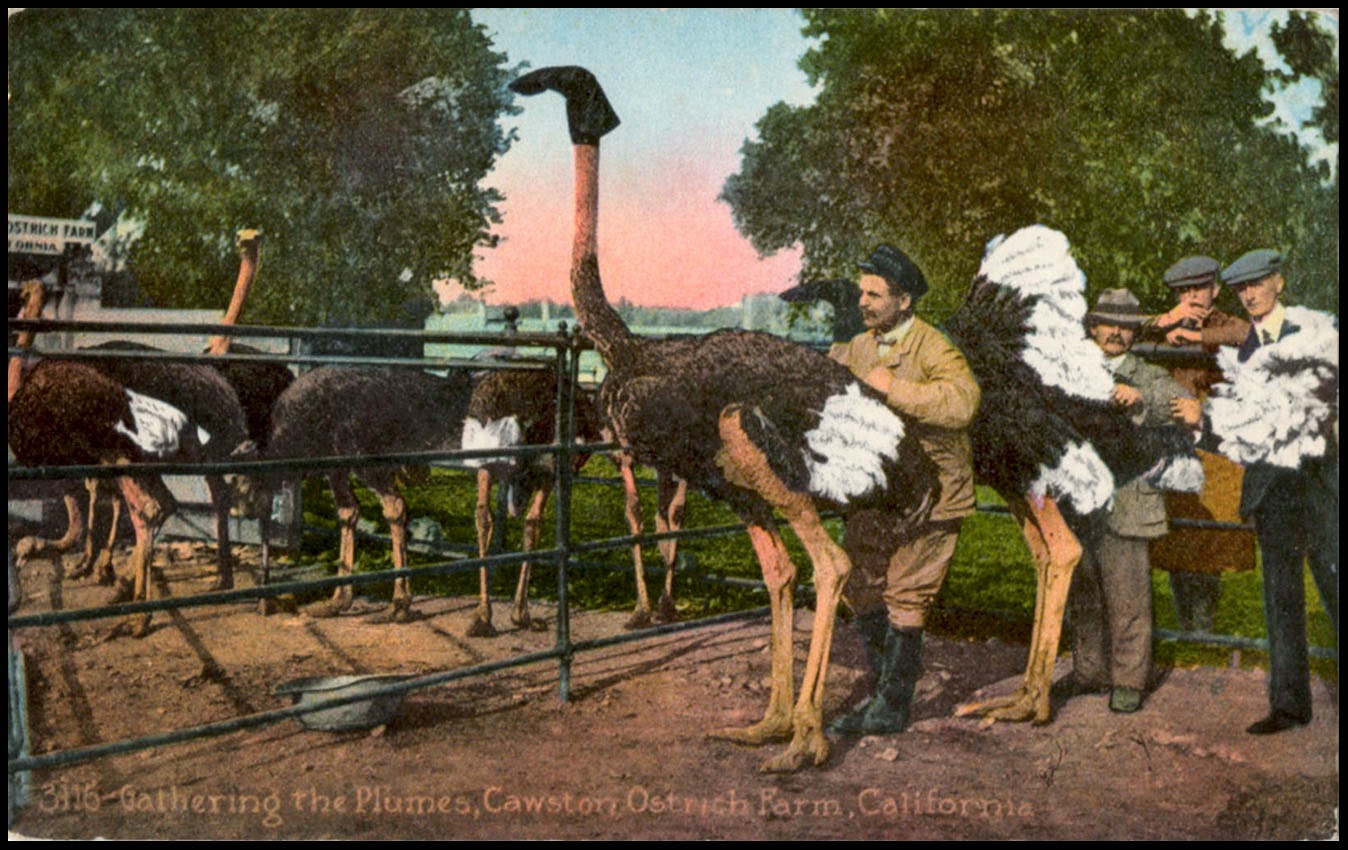 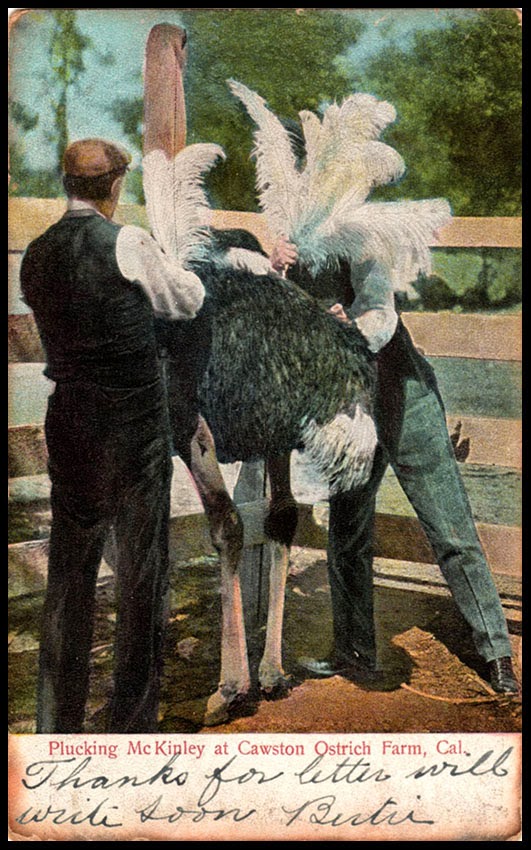 Bébé Cadum, the bully on the street 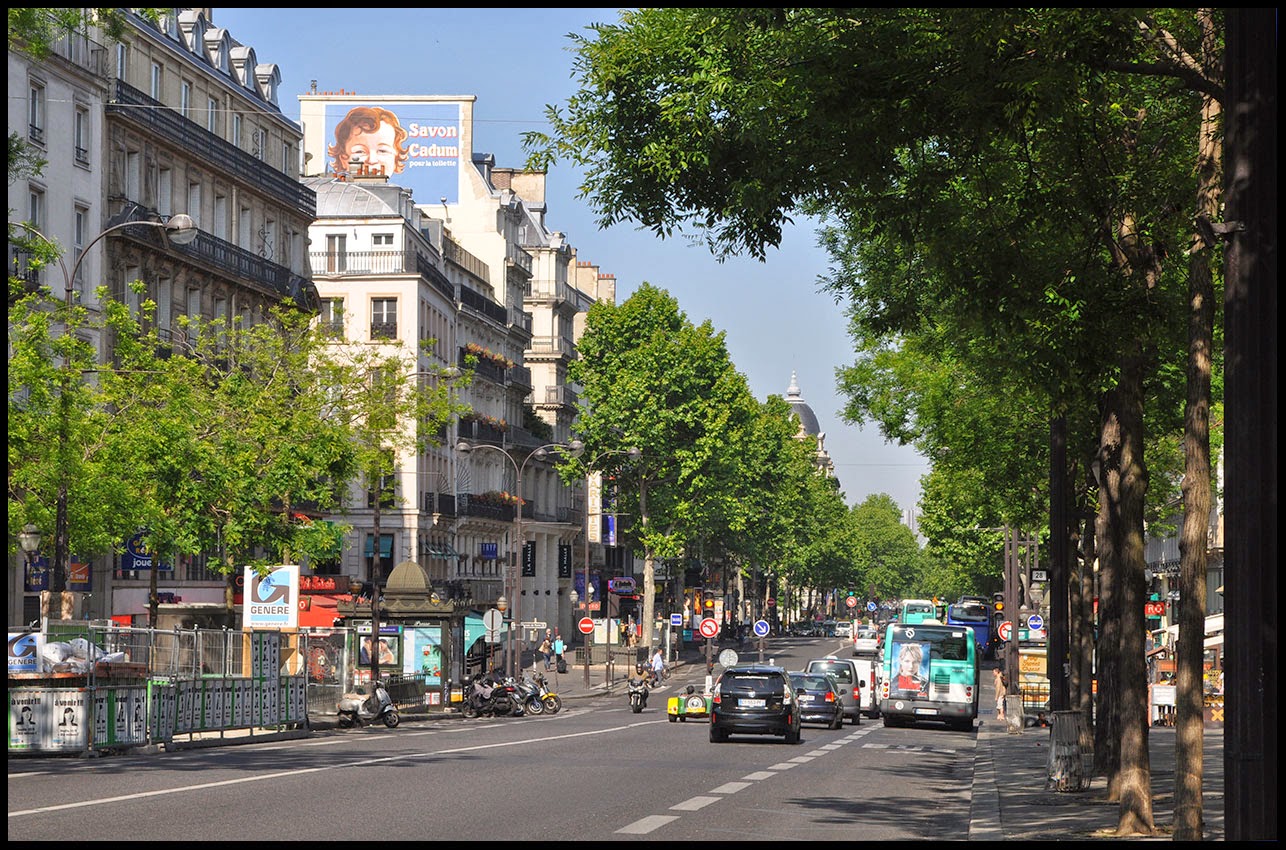 Bébé Cadum is just over a hundred years old and after a long absence, recently made a reappearance in the streets of Paris where once it was a ubiquitous presence. It made a powerful impression on the writer Joseph Roth, who in 1925 commented thus.

Over the rooftops of Paris there is a smiling baby colossus of rude health. It is there to promote, to advertise, a soap whose appalling effects it represents in exaggerated form. This huge disembodied baby, whose mouth is fifty feet across, and whose round, vacant eyes perhaps ten, is attached to walls and fences. It’s a robust monster – a smile today but a grin tomorrow – a sporty infant with a football for a face, the image of the coming man.* 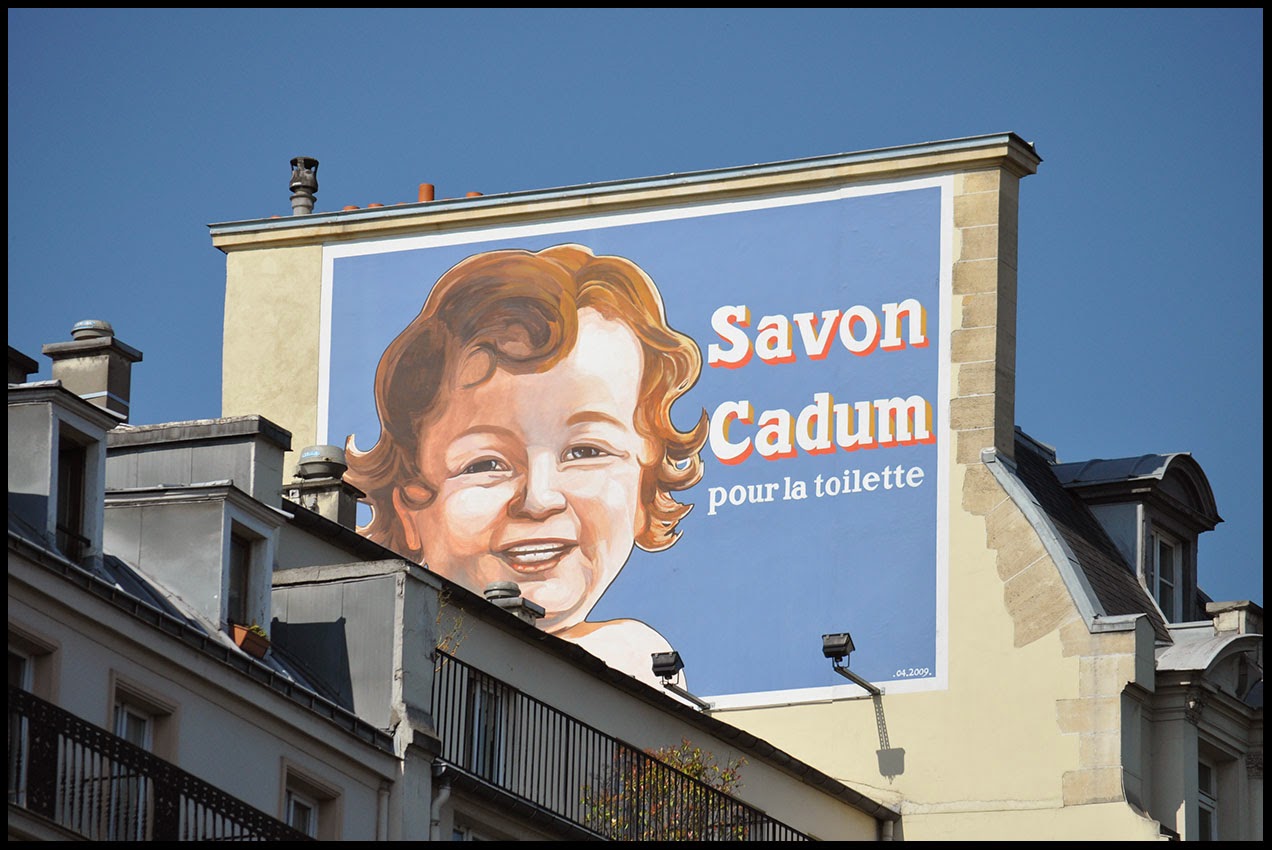 It’s impossible to improve on this description – Roth has identified the sinister radiance that this hideously inflated infant bestows on the populace in the streets below. Not only does its scale remind the consumer that it’s a tiny pawn in a very big game but the ambiguous and over-confident expression is deeply unsettling. This is the countenance of a dictator-in-waiting. 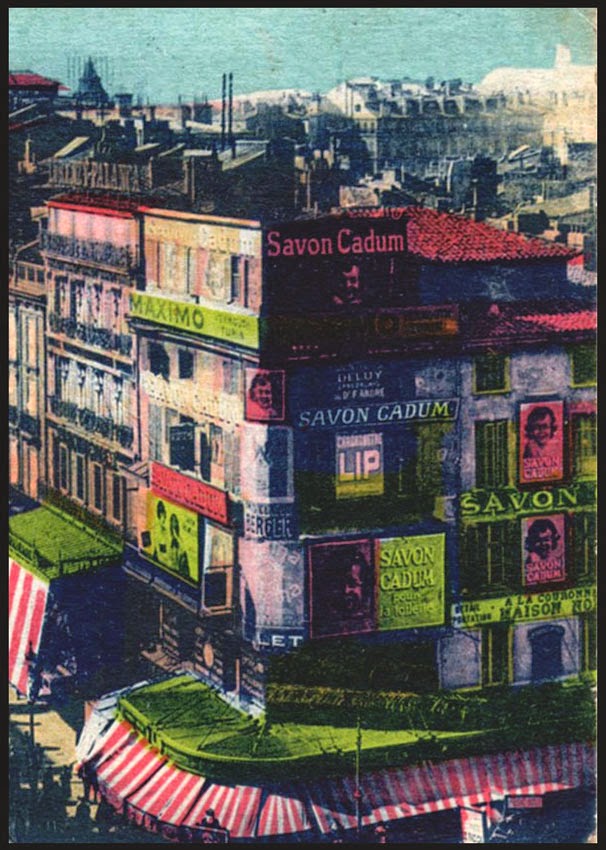 Bébé Cadum’s presence in French life climaxed in the 1930s in the great age of outdoor advertising and vintage postcards from the period recorded how the Bébé triumphed over its competitors, outperforming them at every major street intersection. The examples here come from Place de Clichy in Paris and the Canebière in Marseille. 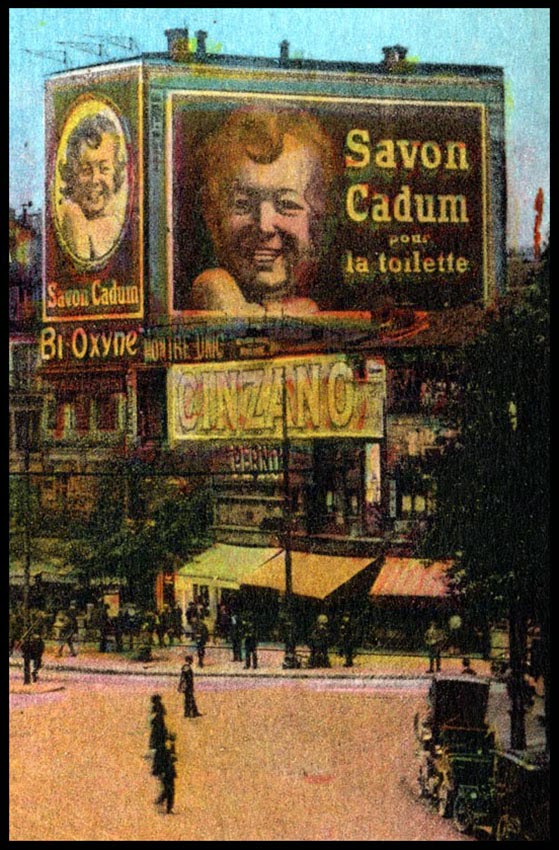 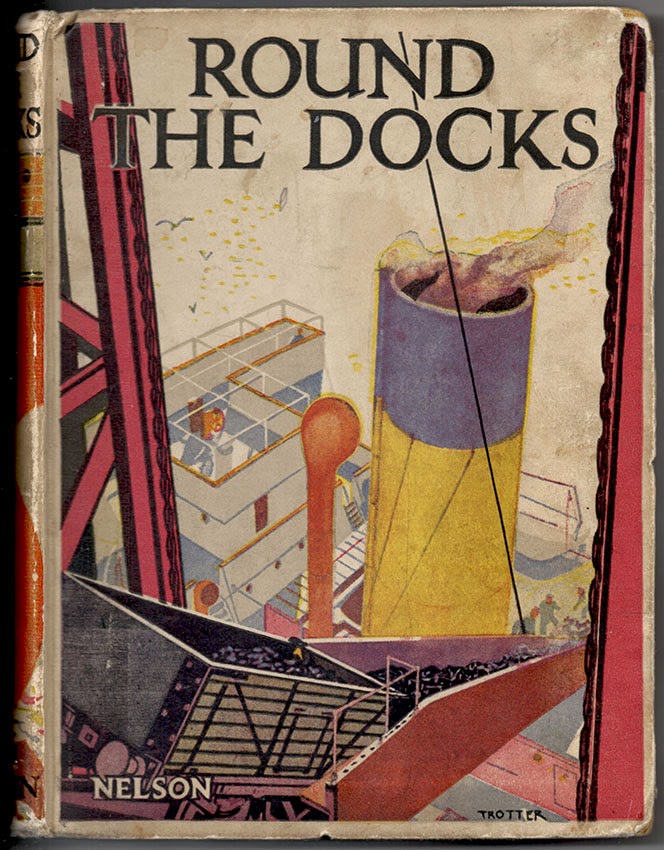 The work was demanding and dangerous, the workforce was casualised and routinely exploited and the workplace was disorderly and perilous but the image of the docks held a special place in the imperialist imagination. All of Britain’s maritime supremacy and economic power as a nation that traded to survive was focused on the dockside. Despite the development of mechanised lifting gear the greater part of the labour involved came from physical effort – enormous quantities of finished goods and raw materials were loaded on and off ships by hand. A picture of ceaseless activity is placed before us. Rail mounted cranes, teams of horses, motor vehicles and railway wagons compete for space on the quayside, above them swing cradles of locomotives or turbines and hoists bearing cotton bales, sacks of sugar or animal carcasses. A compelling theatrical scene of wonder for the spectator and a raucous, turbulent and unstable environment for the manual labourers where the threat of serious physical injury could come from any direction at any moment. 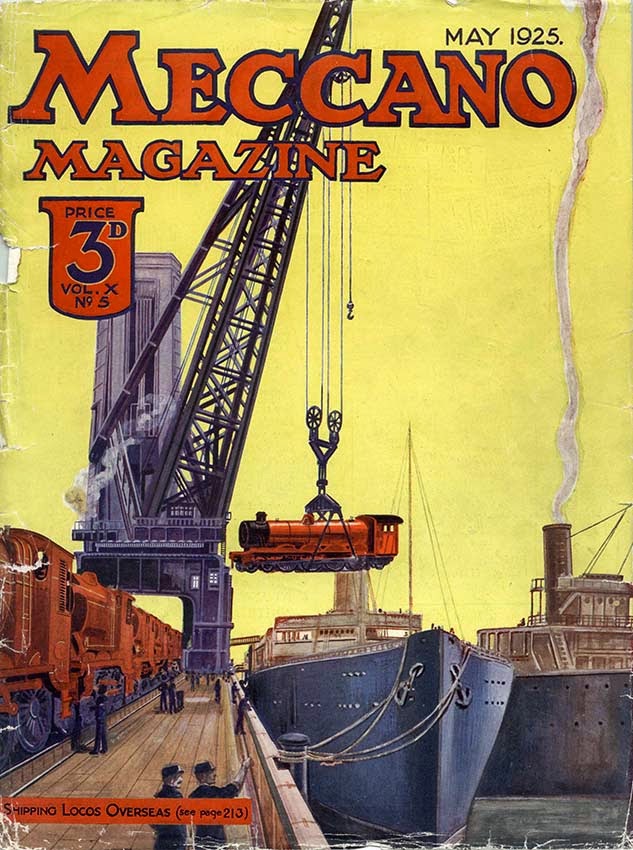 Our old friend the shipping container killed off this spectacle and replaced it with a highly formalised aerial display of bar-coded containers – all very fascinating in a different way but totally inaccessible to the general public. It’s a world of computer commanded reach-stackers, gantry cranes and side-lifters manoeuvring outsize boxes from ship to shore and back again with maximum cost effectiveness in an anonymous intermodal zone where the most frequently heard sound is the warning beep of reversing vehicles. 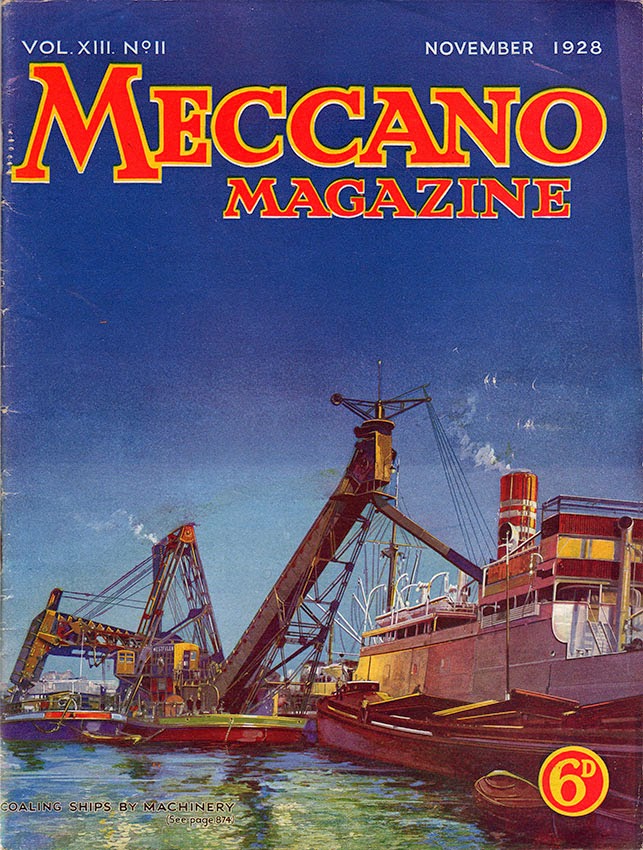 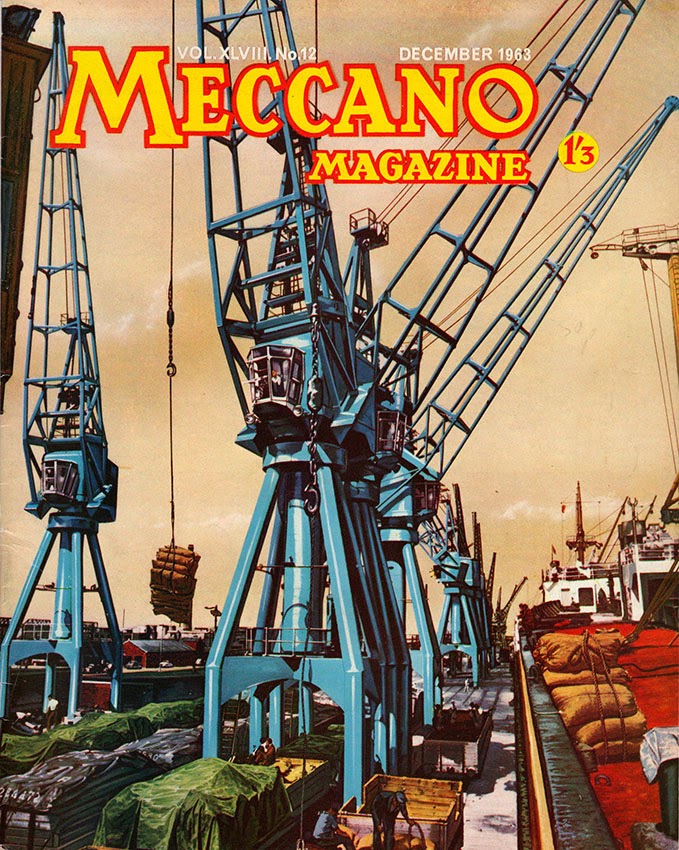 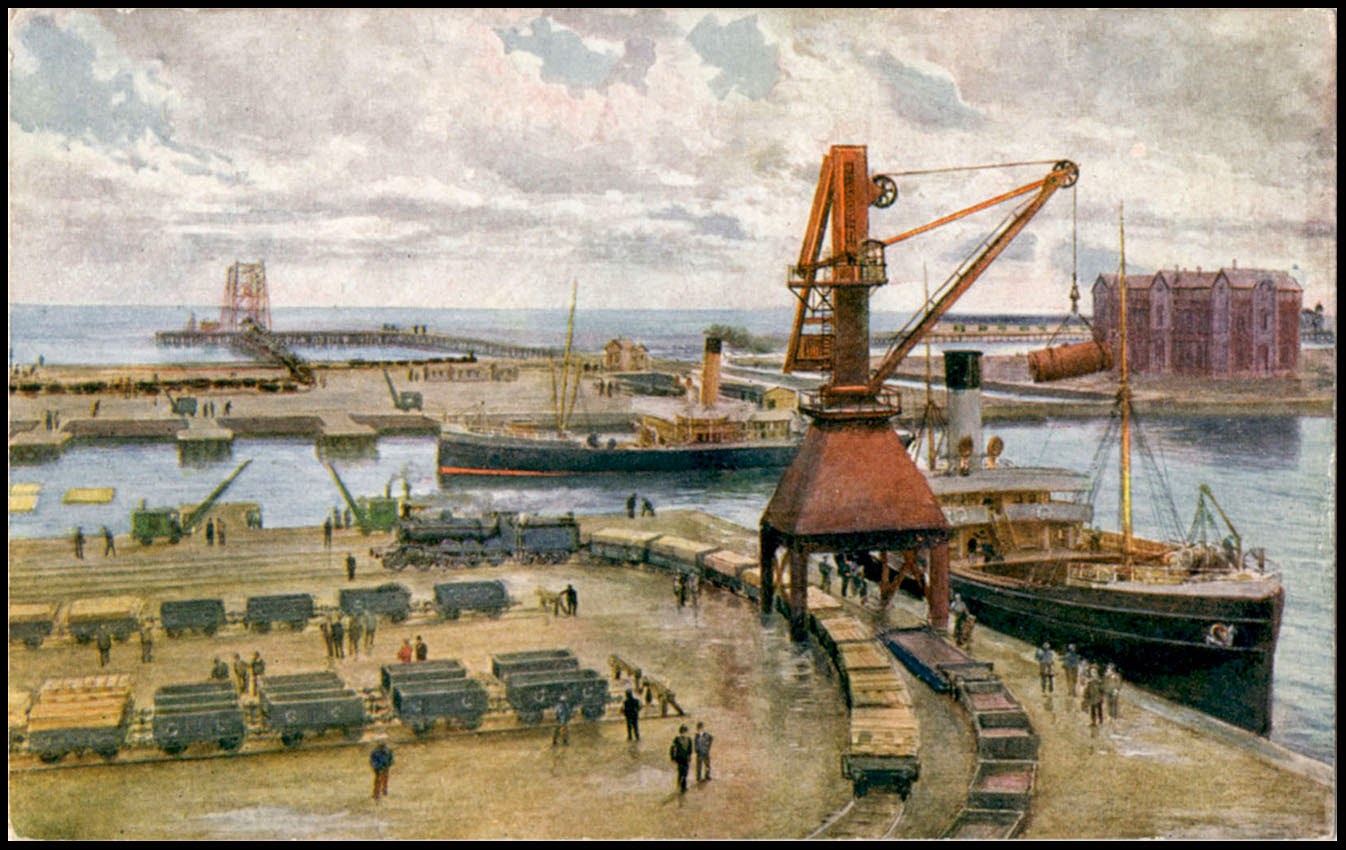 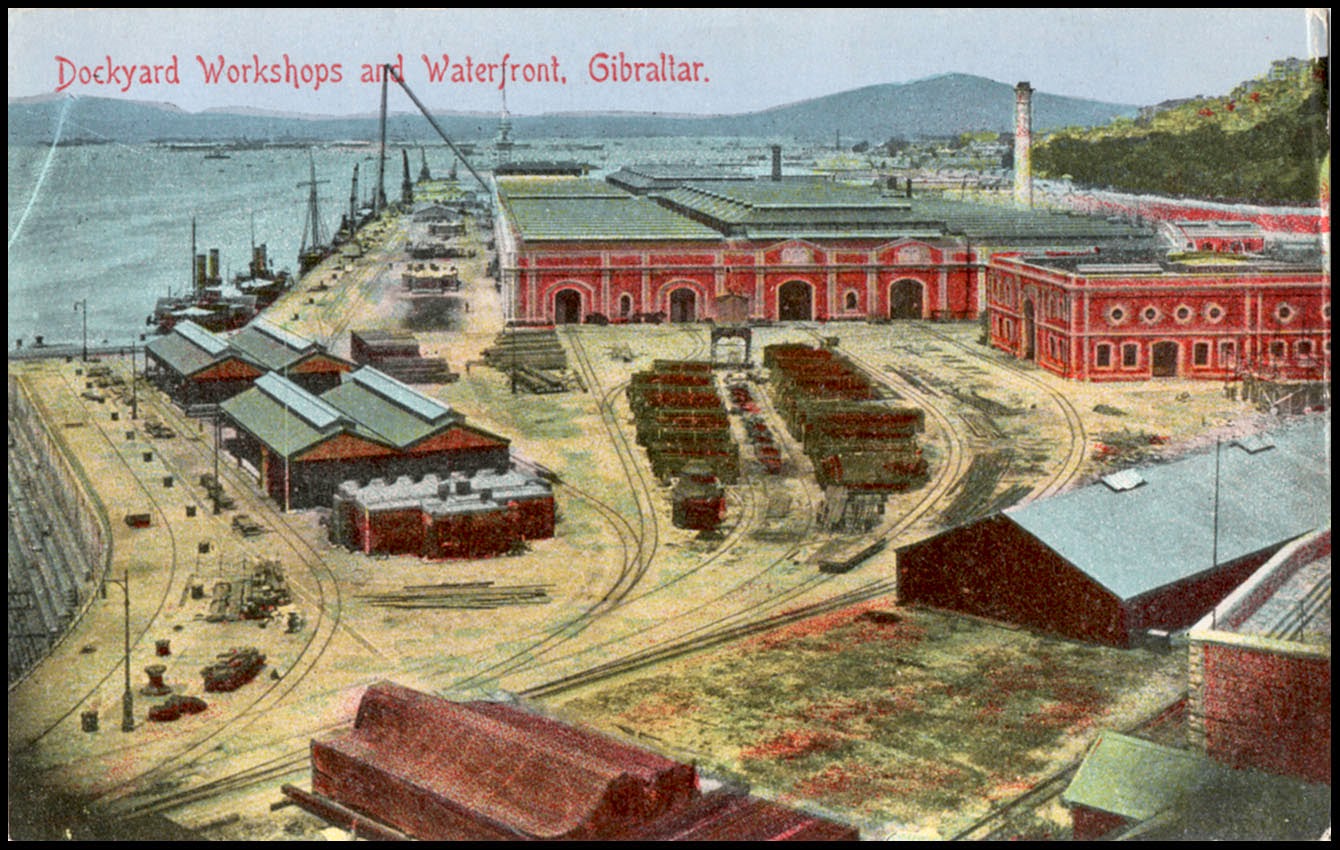 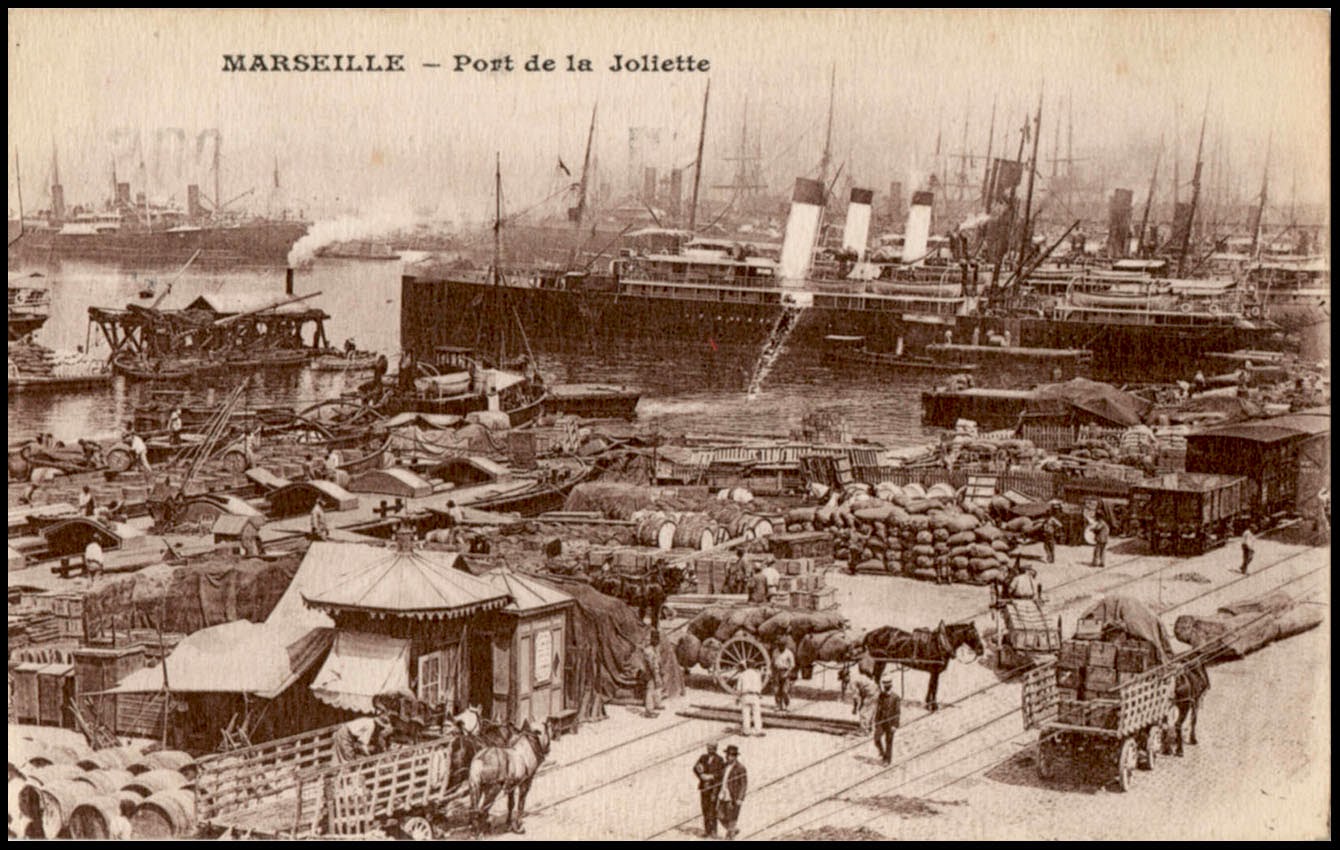 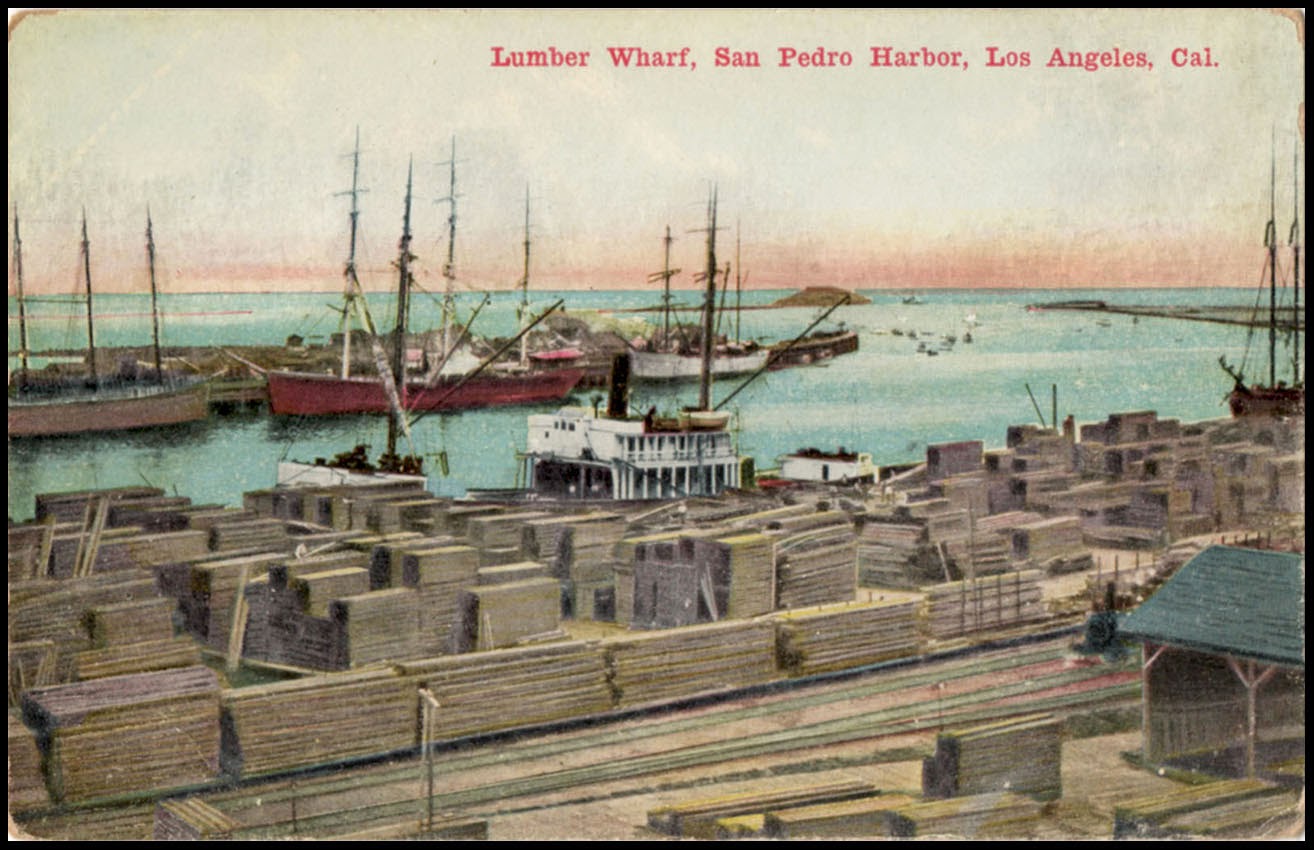 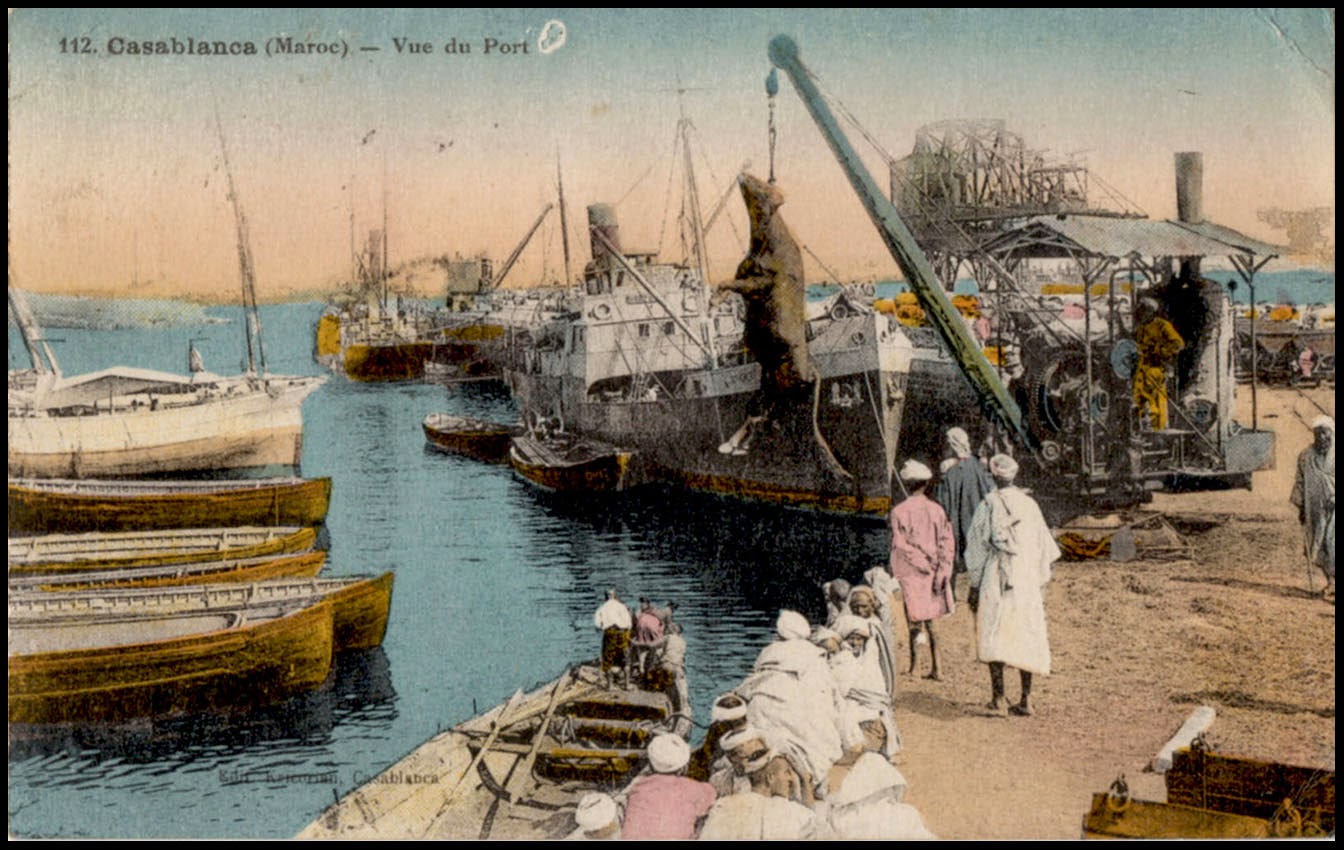 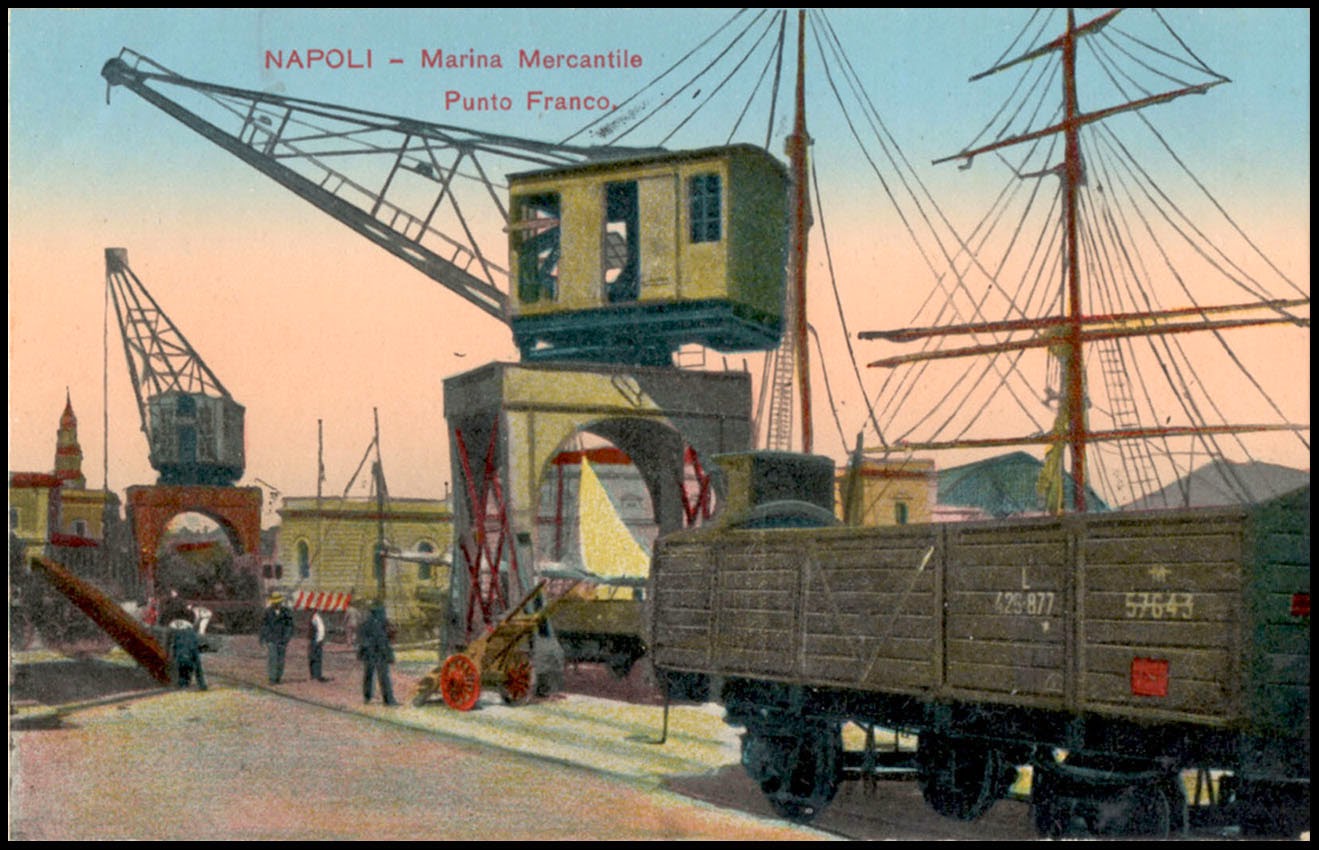 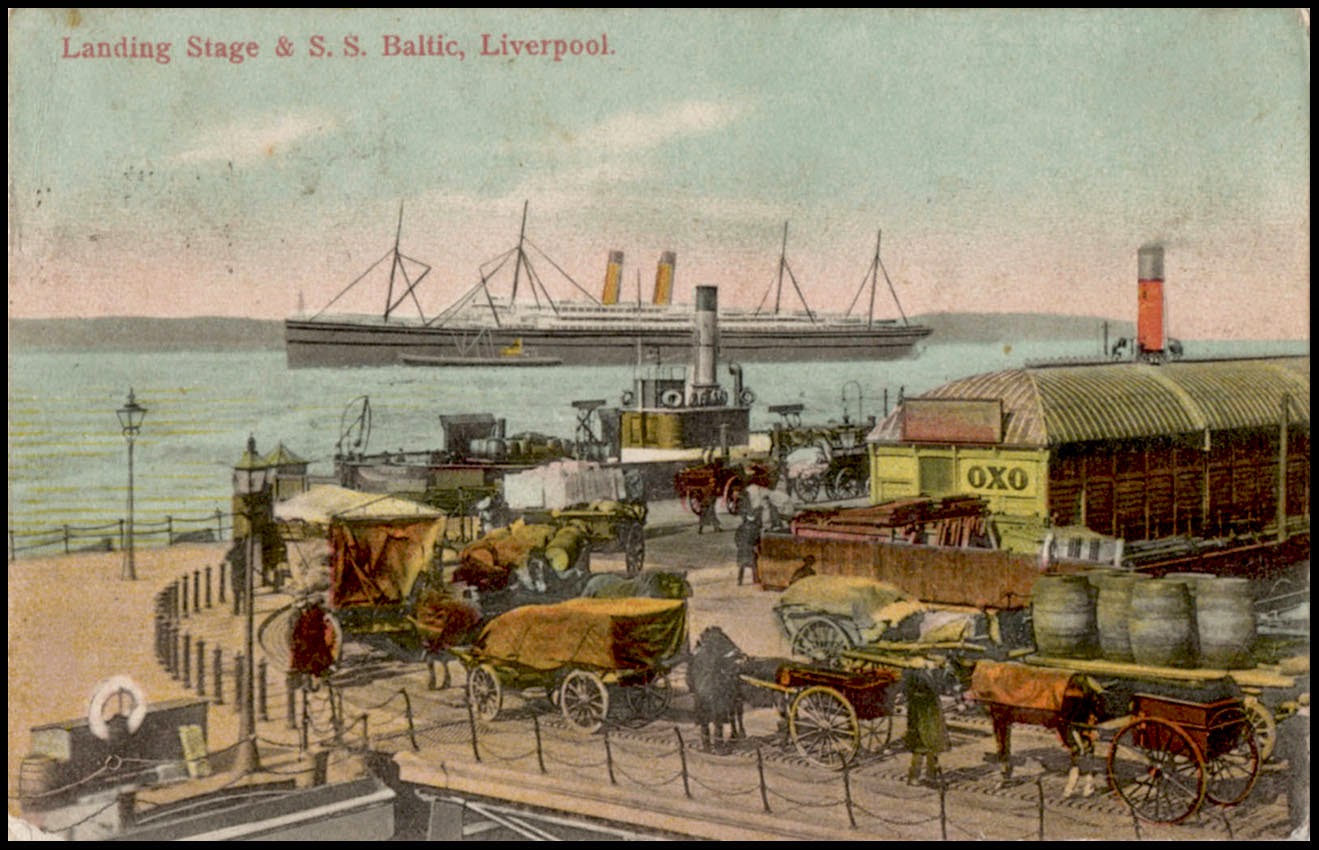 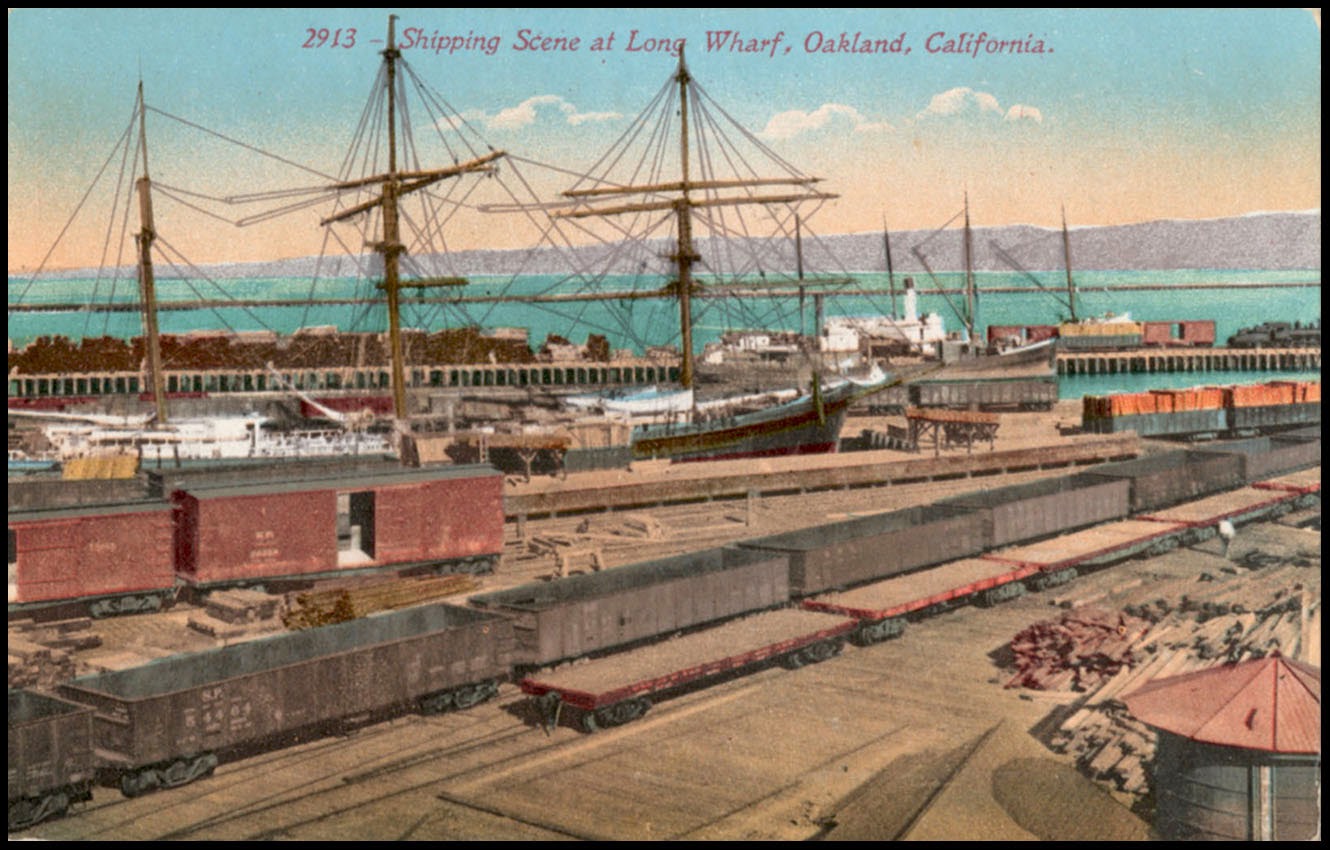 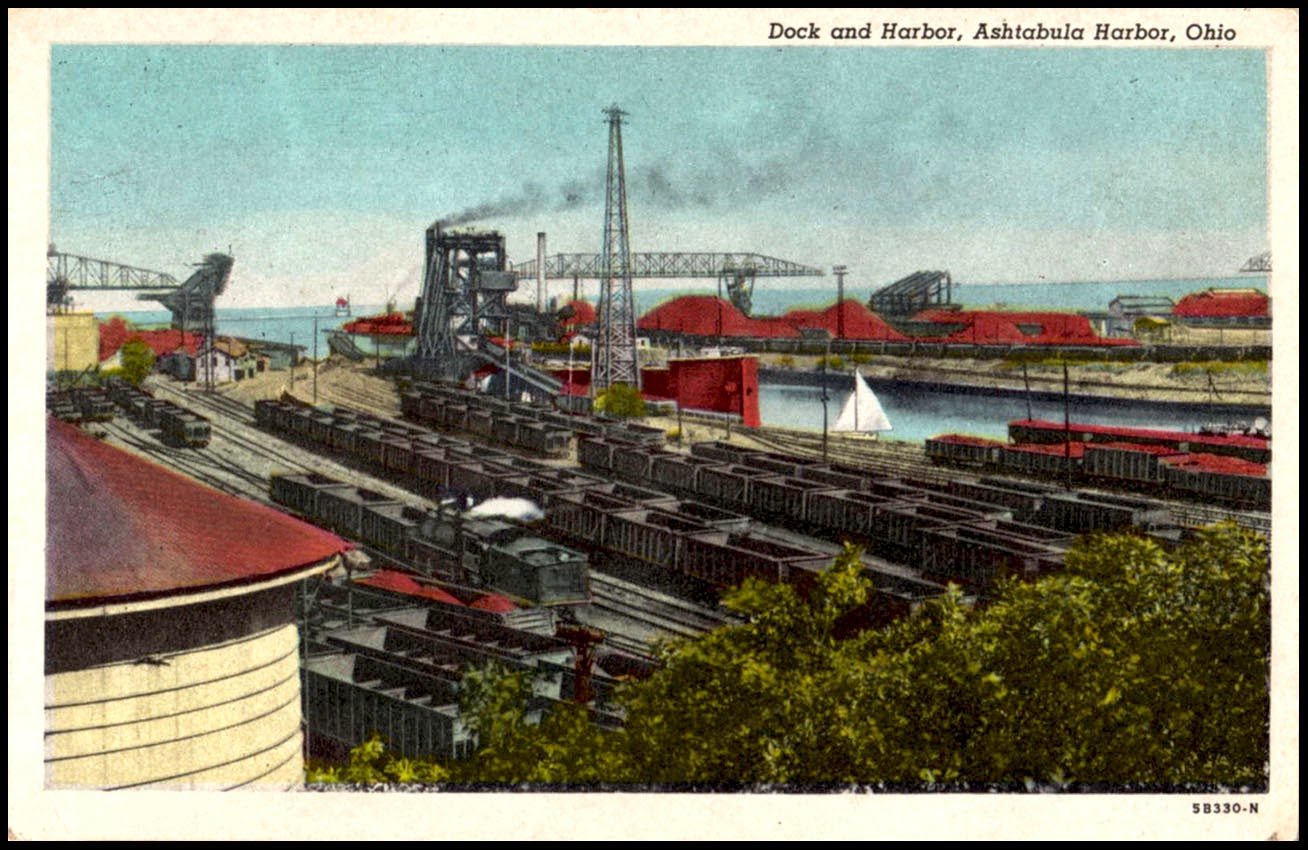 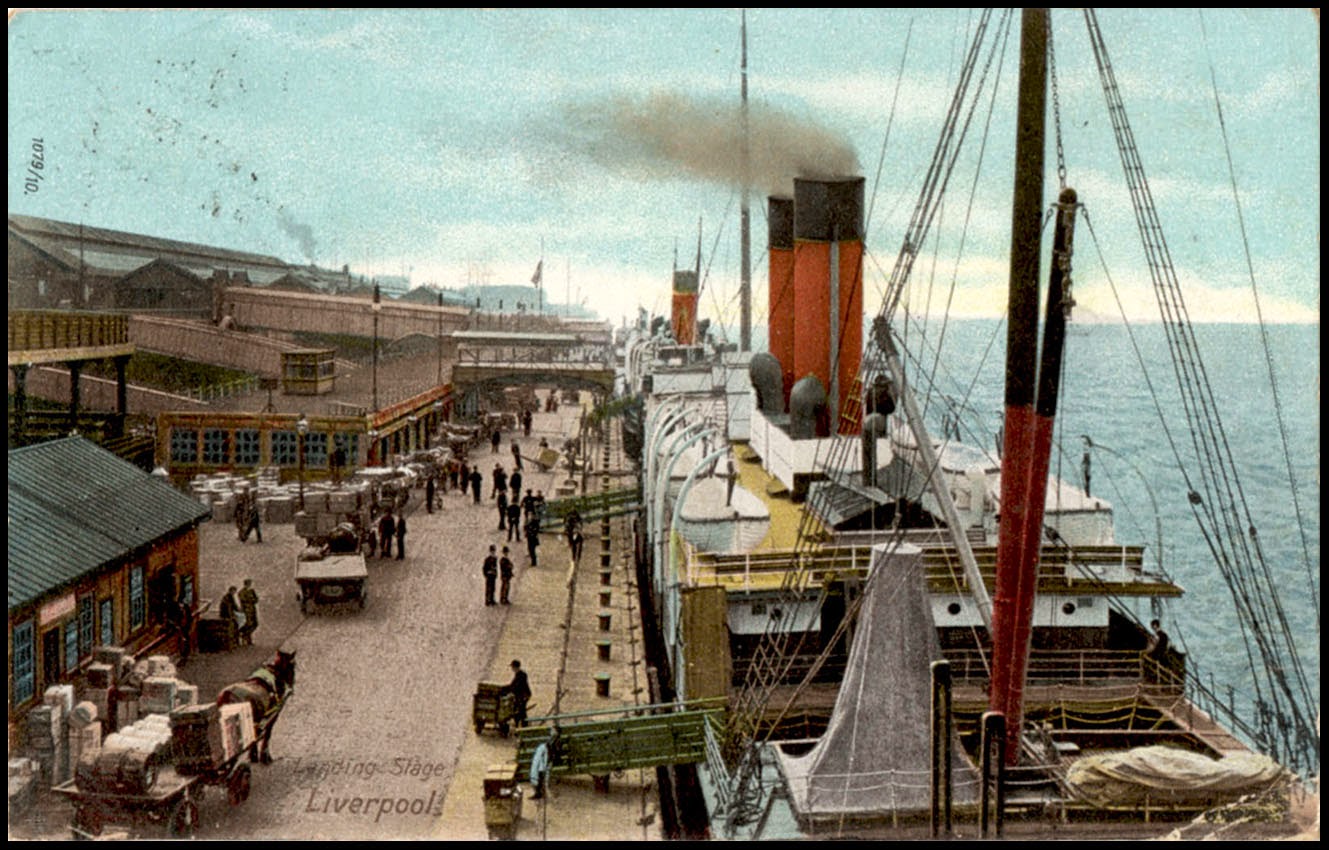