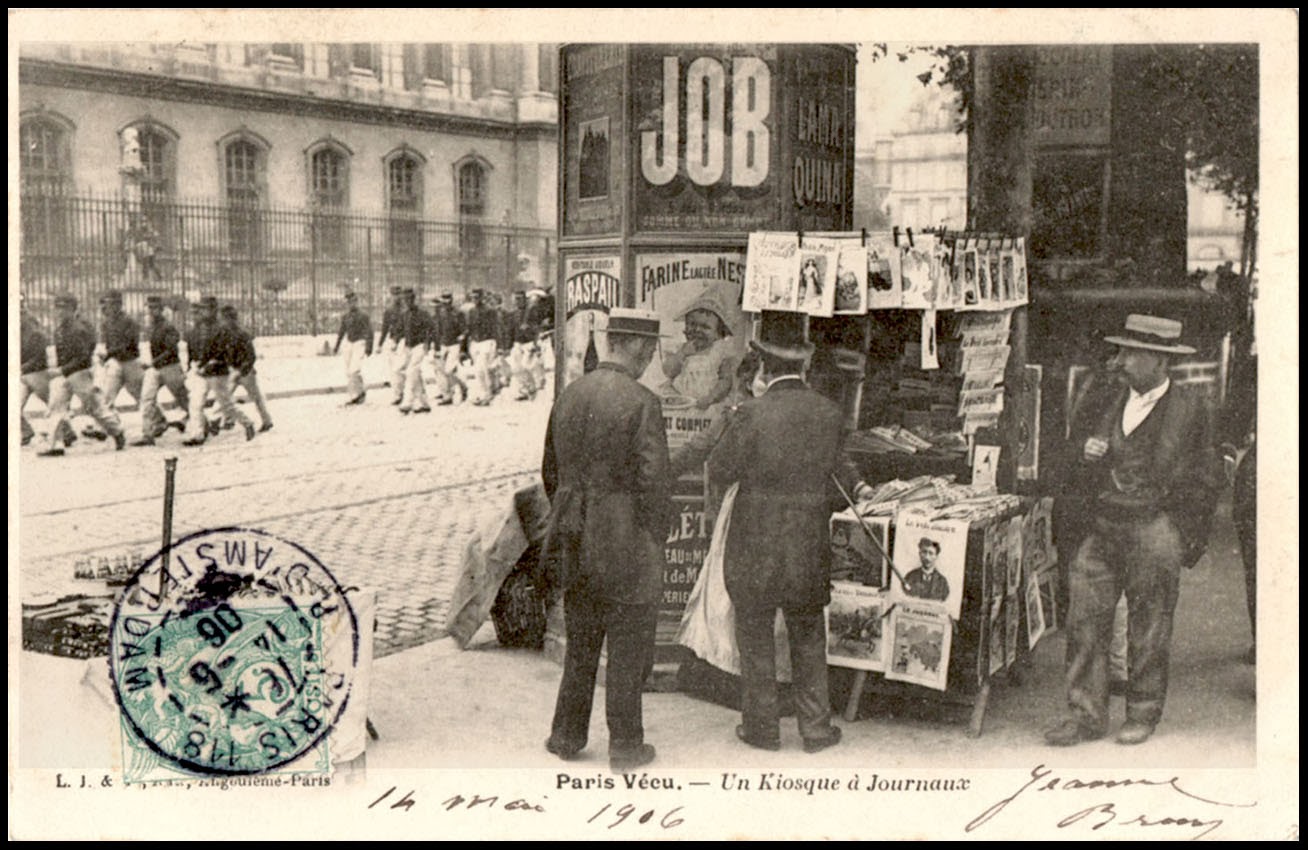 The best record we have of Paris in transition from a compact medieval city to the grand network of broad boulevards masterminded by Haussmann is the photographs of Charles Marville (presently the subject of an exhibition at the Met in New York). In the 1870s he made a series of more than 200 images of the new street furniture gracing the boulevards – newspaper kiosks, Morris columns, vespasiènnes, Wallace Fountains, as if he was already aware of the extent to which they would define the future image of the city. None of these features is unique to Paris but taken together they are integral to the way the city is perceived in the eyes of visitors. Another observer of Paris en flanant was the painter Jean Béraud whose keen eye for telling detail was all too often undercut by a tendency to add an ingratiating element of fashionable caricature to the scene. While artists like Caillebotte and Pissaro looked to reveal deeper truths about the urban experience, Béraud gave his attention to getting the detail right. 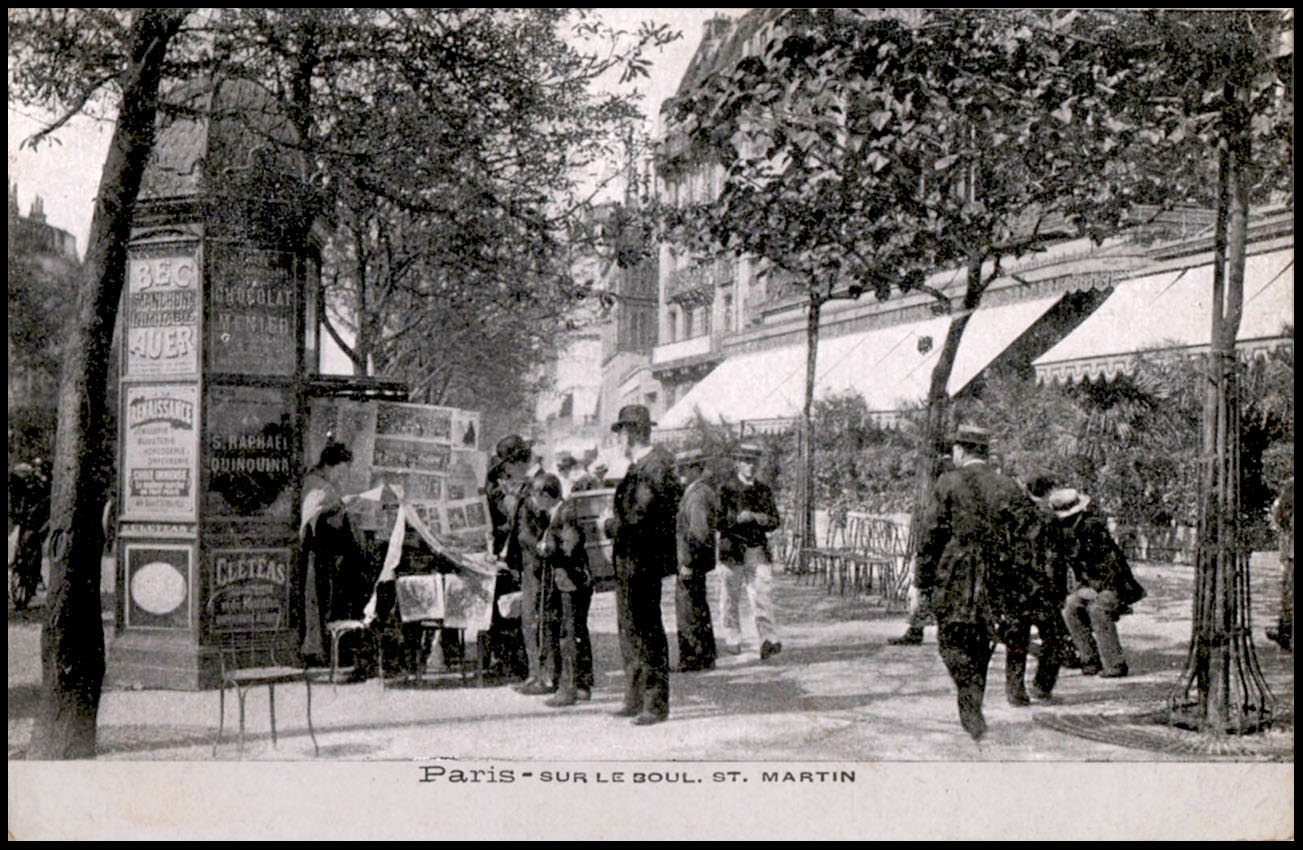 Vintage postcards are the next best guide to the spirit of Parisian streets and the enormous volume of cards produced in the first decade of the last century provide a comprehensive archive of imagery. While Paris was swept by waves of political agitation and the second campaign of anarchist bombings (almost nothing of which disturbed the surface of the postcard universe), postcard photographers explored every corner of the city leaving behind a mountain of documentary evidence. Sometimes, as here, the evidence is in the foreground in the choice of subject but often it’s to be found in minute examination of the margins and periphery from which many of the details below have been taken. 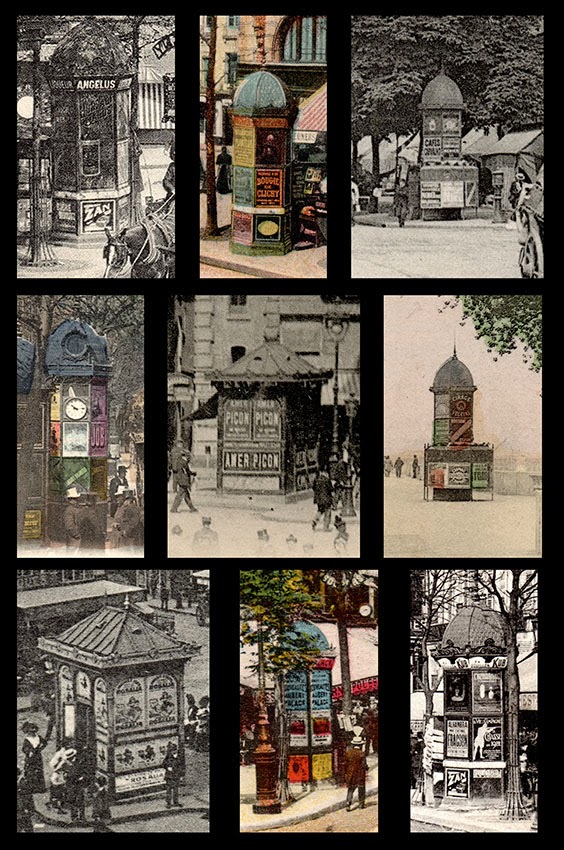 Victor Serge (in Memoirs of a Revolutionary) described the sight of newspaper kiosks burning on the Parisian pavements when a mob of demonstrators protesting against the execution of Francisco Ferrer denied access to Boulevard Malesherbes vented their fury on the Grands Boulevards in October 1909. They made an easy target and being well stacked with combustible material, a satisfying conflagration was guaranteed. An artistic response to this social turbulence can be seen in the Musée d’Orsay in a painting entitled La Charge (photographed in 2006 when still permitted), a vertiginous description of a clash between police and demonstrators on the Boulevard Montmartre. The artist was André Devambez (1867-1944), a junior member of the famous dynasty of Parisian printers of the same name, a significant part of whose workload was printing the posters that were displayed on the Morris columns. Between 1927 and 1934 this painting was on display in the office of the Prefèt de Police, Jean Chiappe, who, in another age of ideological conflict on the streets, became notorious for the enthusiasm with which he repressed demonstrations by socialists and communists while showing very little interest in responding to the violent activities of the right, mostly from the odious Action Française. Chiappe also campaigned unsuccessfully for the elimination of the vespasiènnes from the city streets – another 50 years would pass before this was finally achieved. Today’s Parisian kiosks are made from polycarbonate in a modified traditional form. Reports suggest an insecure future with a collapse in the sale of print media. The Morris columns are no less threatened with plans to reduce their numbers by 25%. 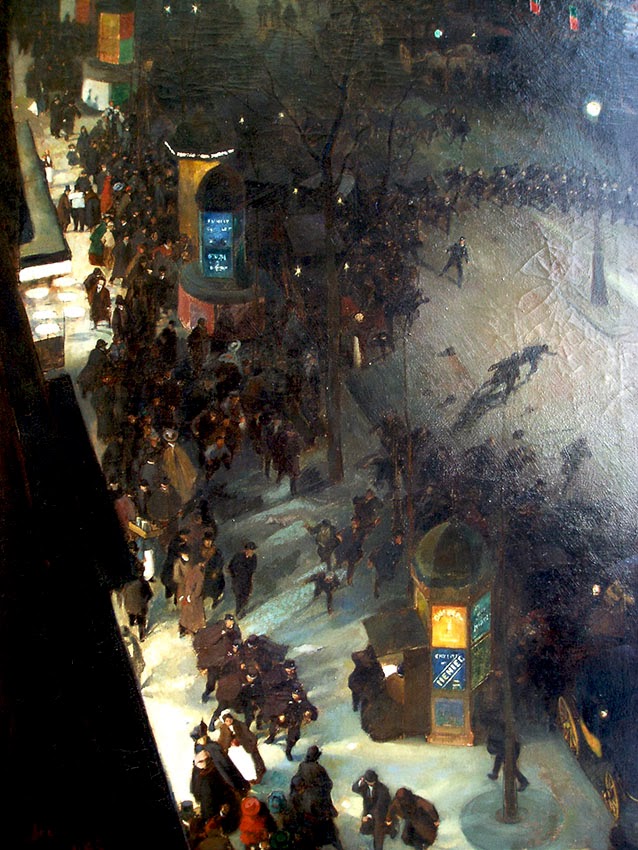 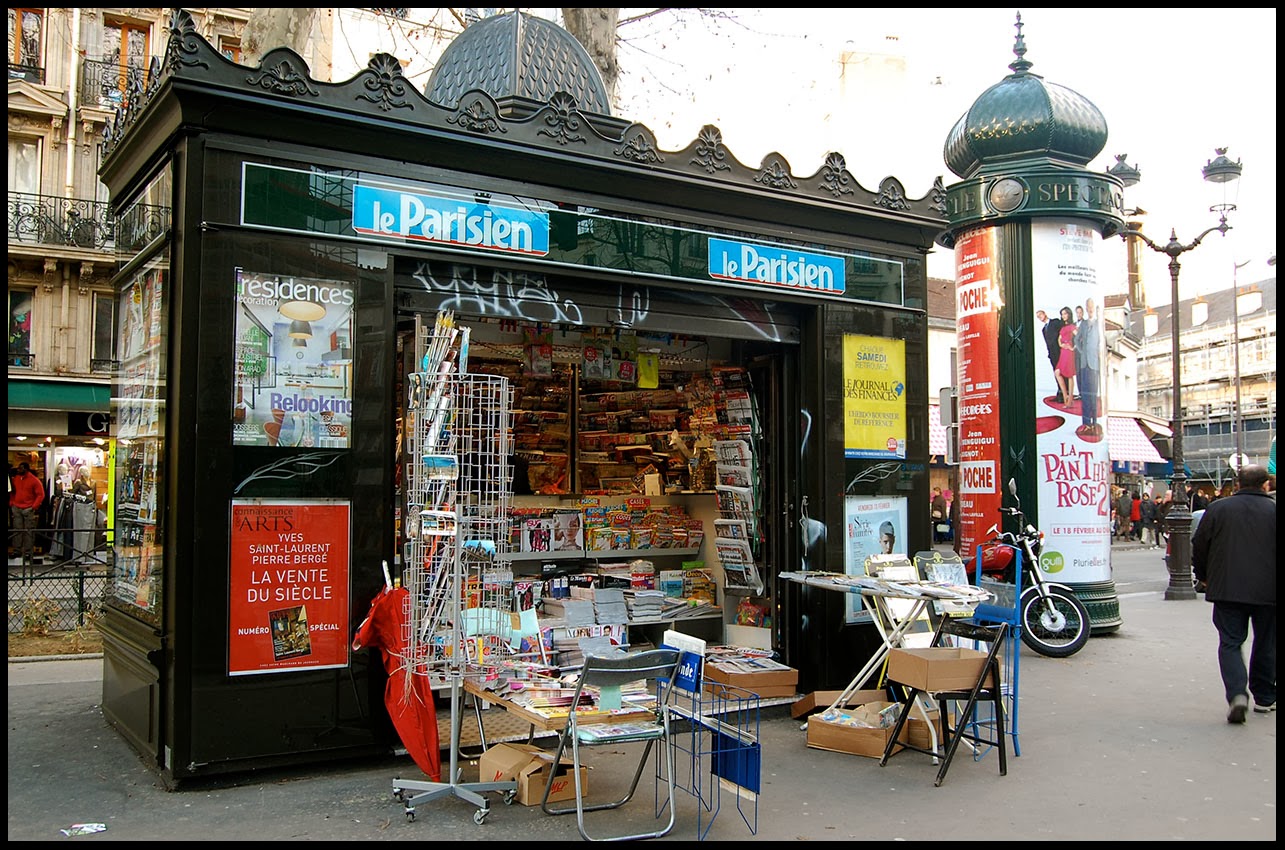 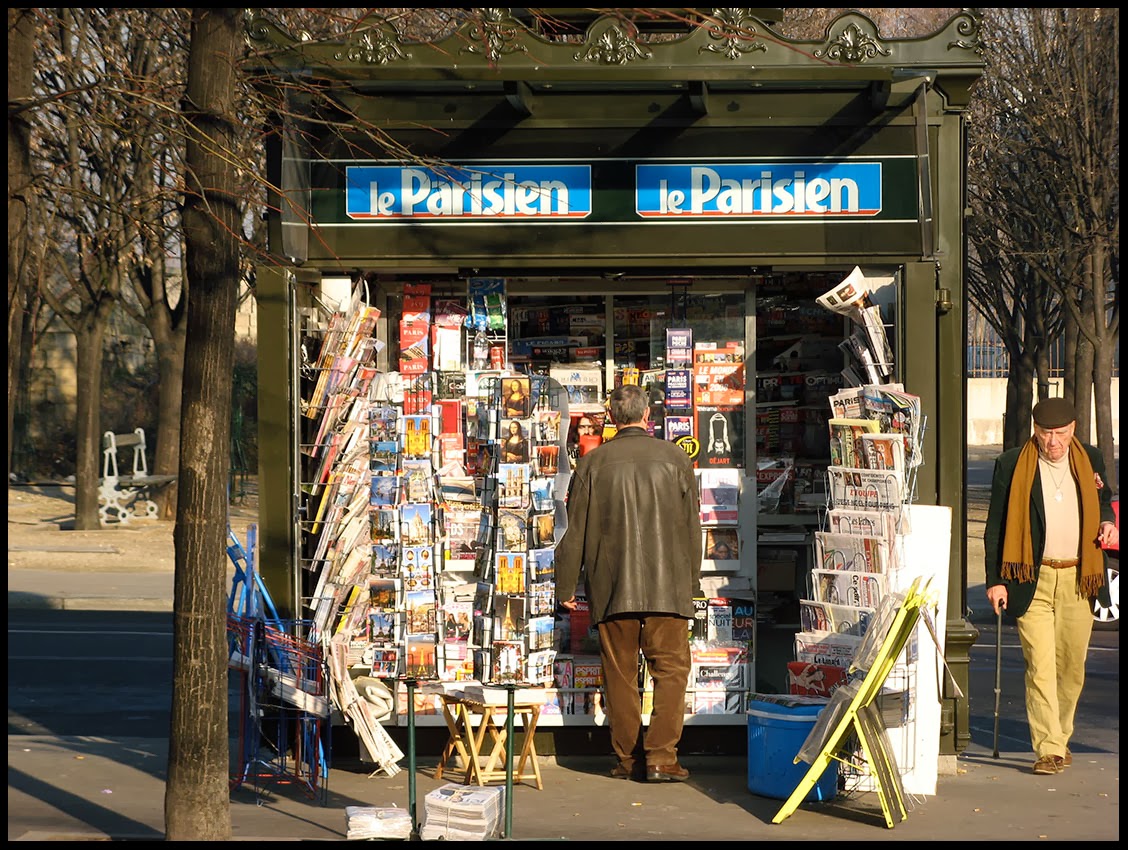 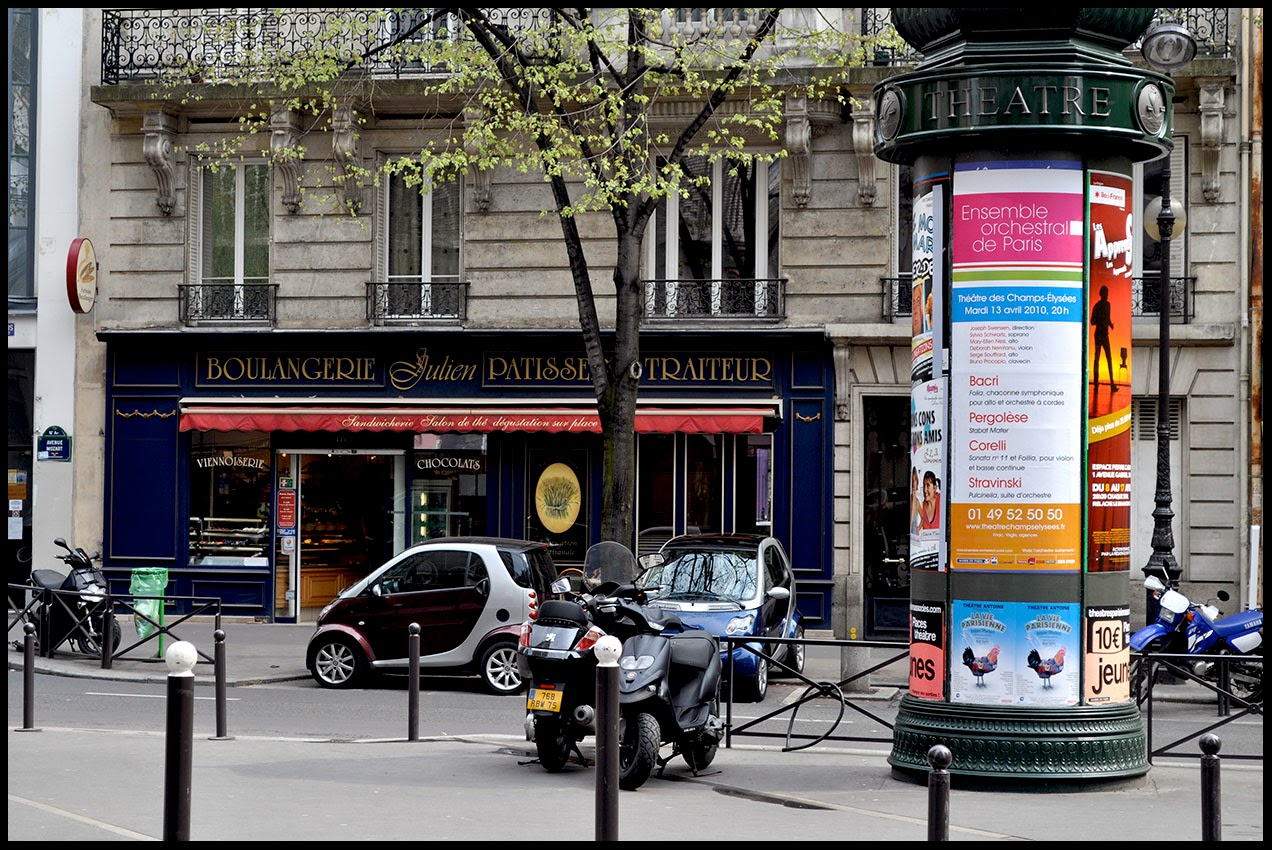 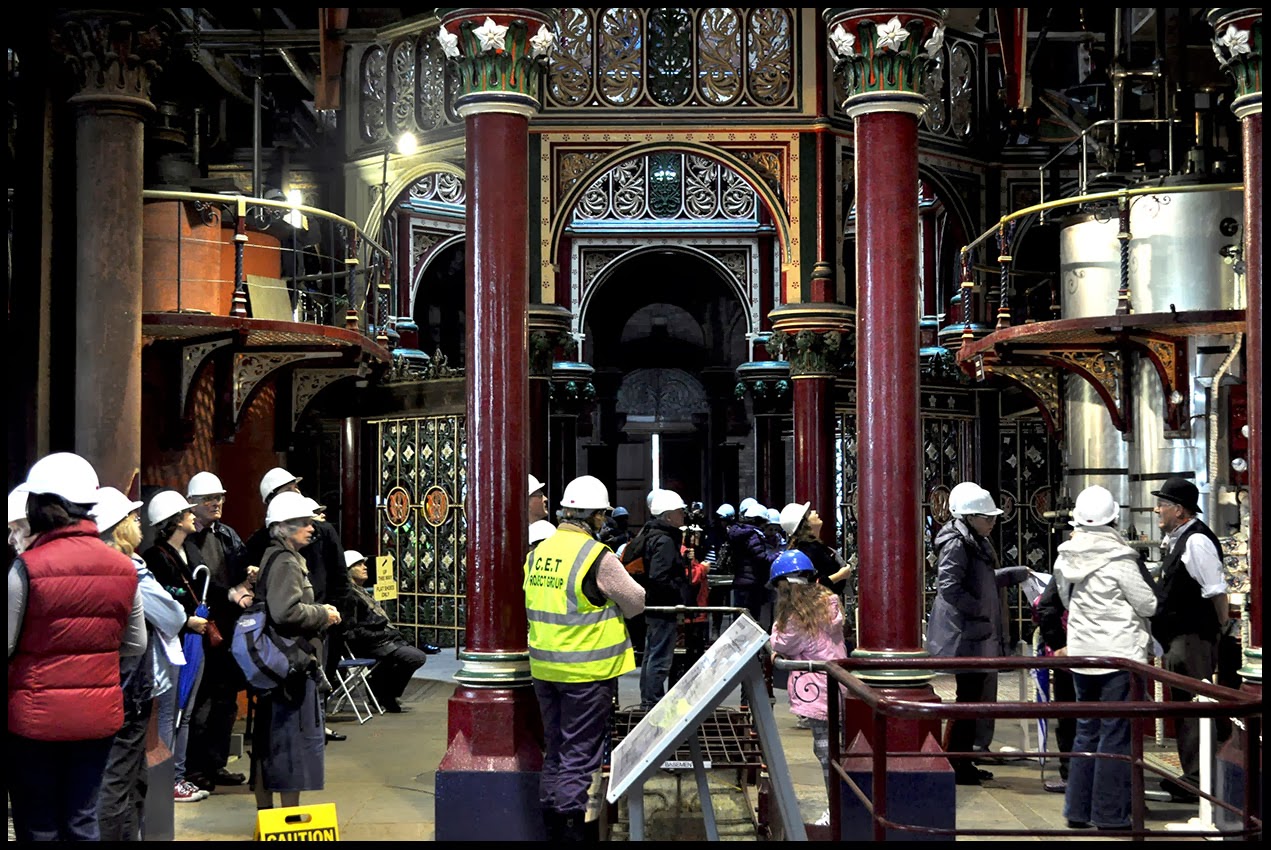 This is a rather delayed account of an expedition to the outer fringes of Thamesmead (what was once Erith Marshes) last October. It’s the location of the Southern Outfall where the accumulated sewage of South London was discharged into the Thames. In 1865 the Crossness Engines were installed to pump the faecal matter from the holding reservoir into the waters of the river in the final stage of Sir Joseph Bazalgette’s scheme to supply Londoners with unpolluted drinking water and relocate the stench of the city to a place of safety underneath the streets in a network of sewers. 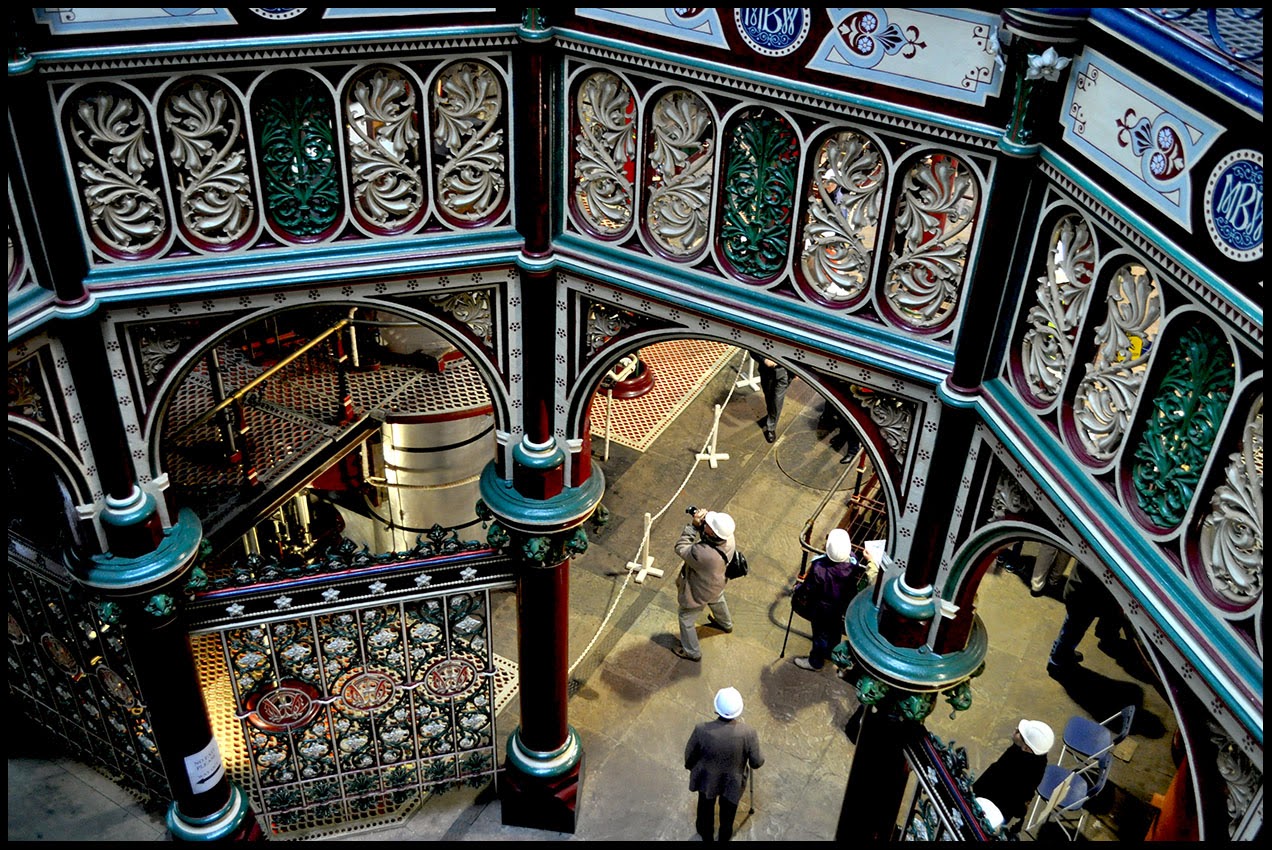 In the great British tradition of rescuing the past from oblivion, the volunteers of the Crossness Engines Trust have done a brilliant job of restoring one of the four steam powered beam engines to working order and every few months the public are admitted to see this engineering marvel at work. When it was built the Victorian civic pride in engineering achievements was expressed via the extraordinary assemblage of decorative, multi-coloured wrought-ironwork. The desire to impress encompassed the most basic and unglamorous projects. 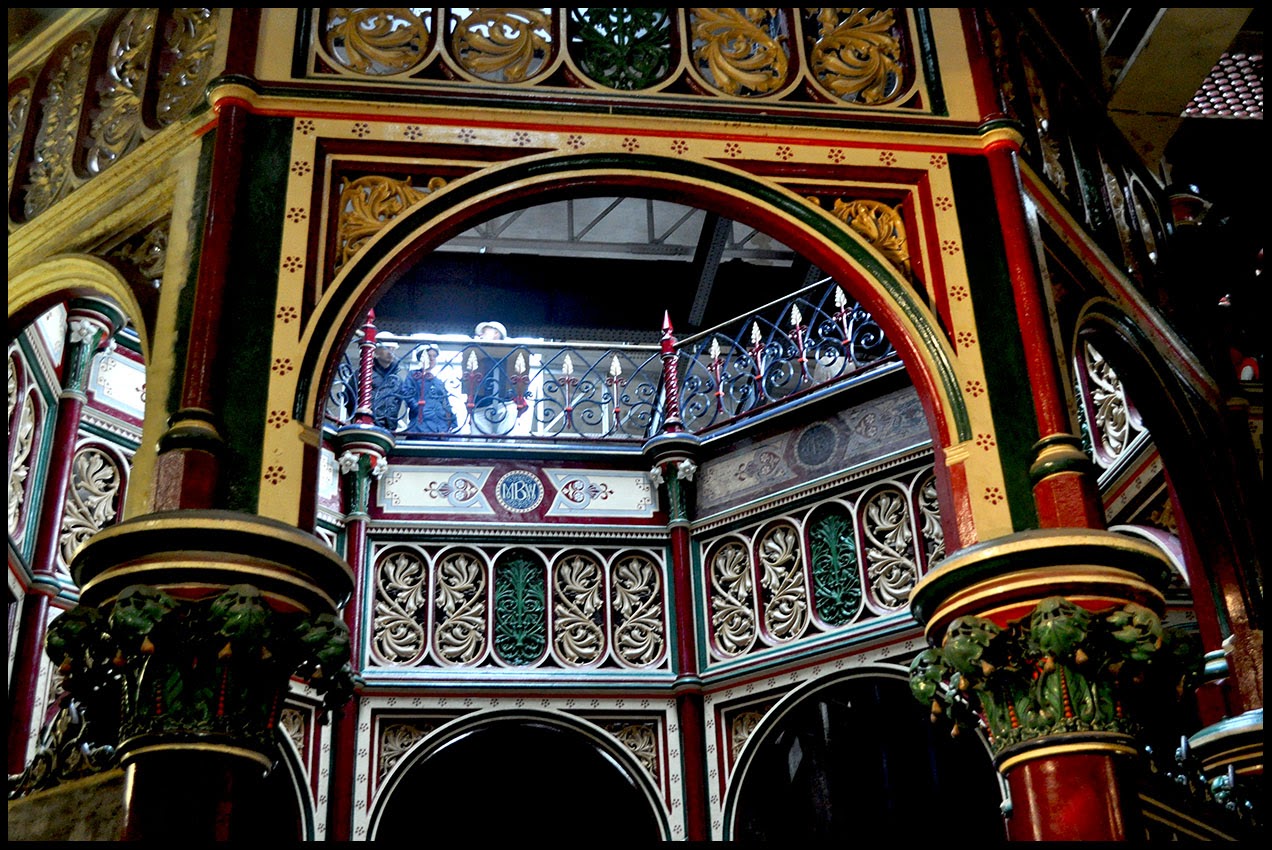 The true splendour of this place is to be found in the Engine House containing 4 beam engines, one of which has been restored to working order. The Engine House interior is a marvel of theatrical presentation. Entrance is via a central cast iron Octagon supported by maroon painted columns with stencilled arches. Above there are balustrades, richly embellished with lozenges of writhing plant forms, acanthus leaves, cast iron flower heads, floral stencilling and the ornamental crest of the Metropolitan Board of Works. Immense care has been taken throughout to ensure that the stonework, brickwork and paint finishes are as close as possible to the original condition to comply with its Grade I listed status. An upper level gives access to the main beams. The three unrestored beam engines have been out of action since 1956 although plans exist to rebuild one of them. The metal floor was perforated to allow excess heat from the engines below to rise up to the ventilation shafts. Opening days in 2014 can be seen by following this link. 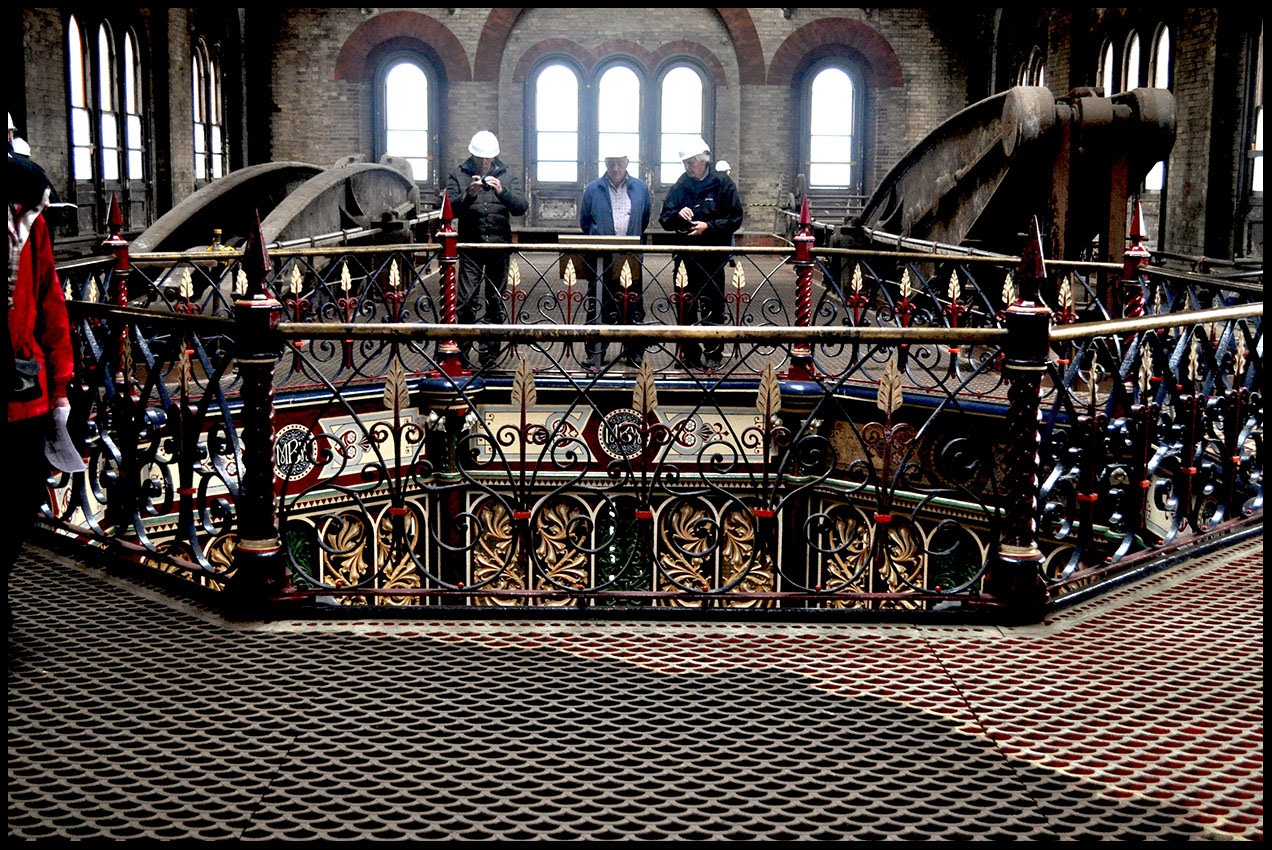 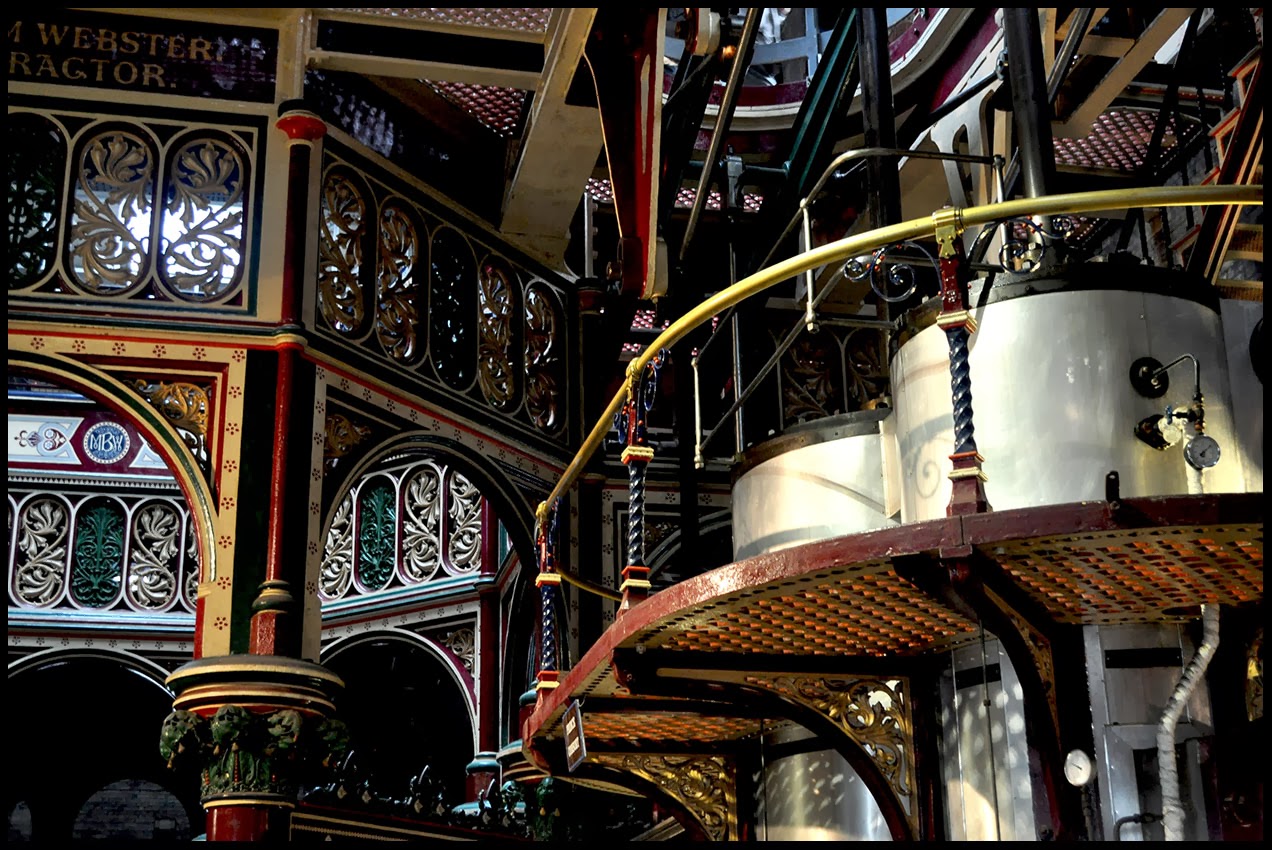 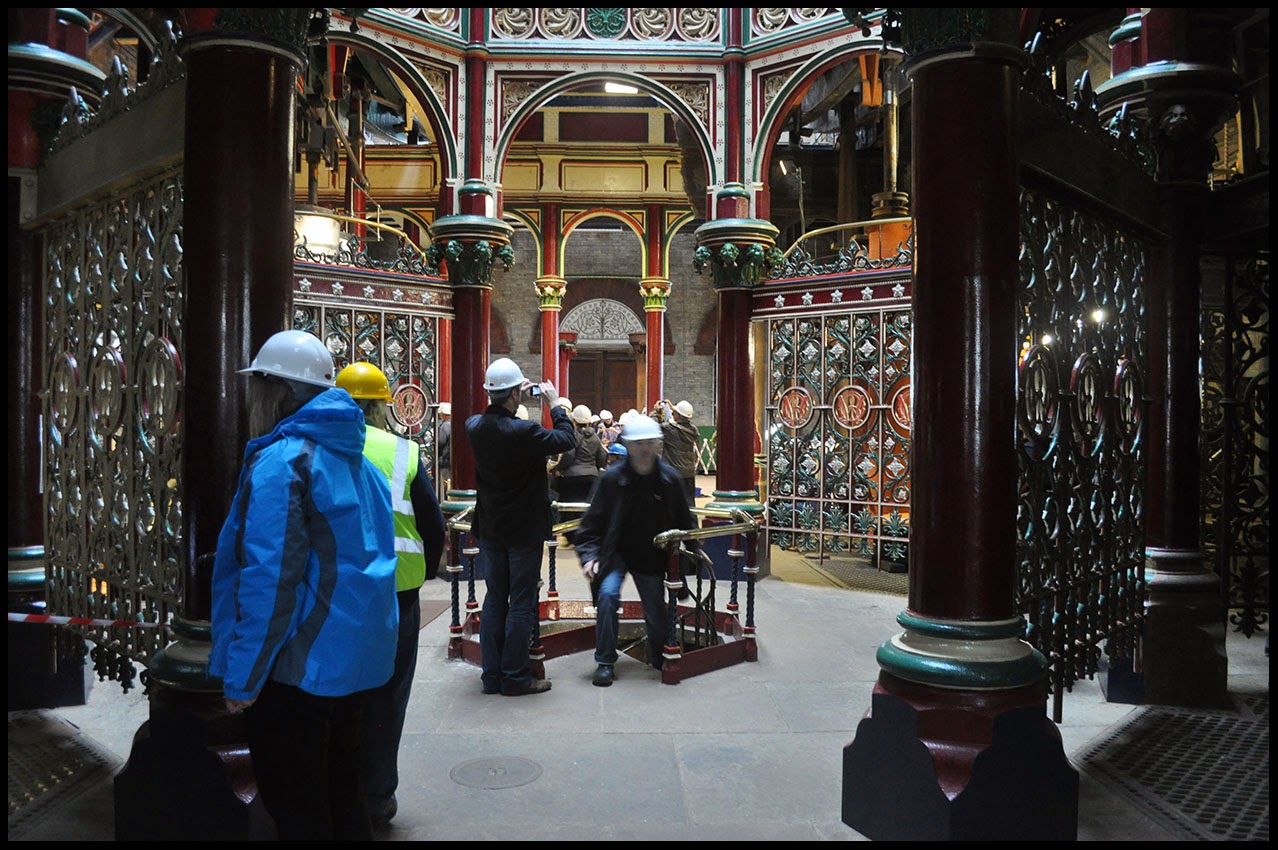 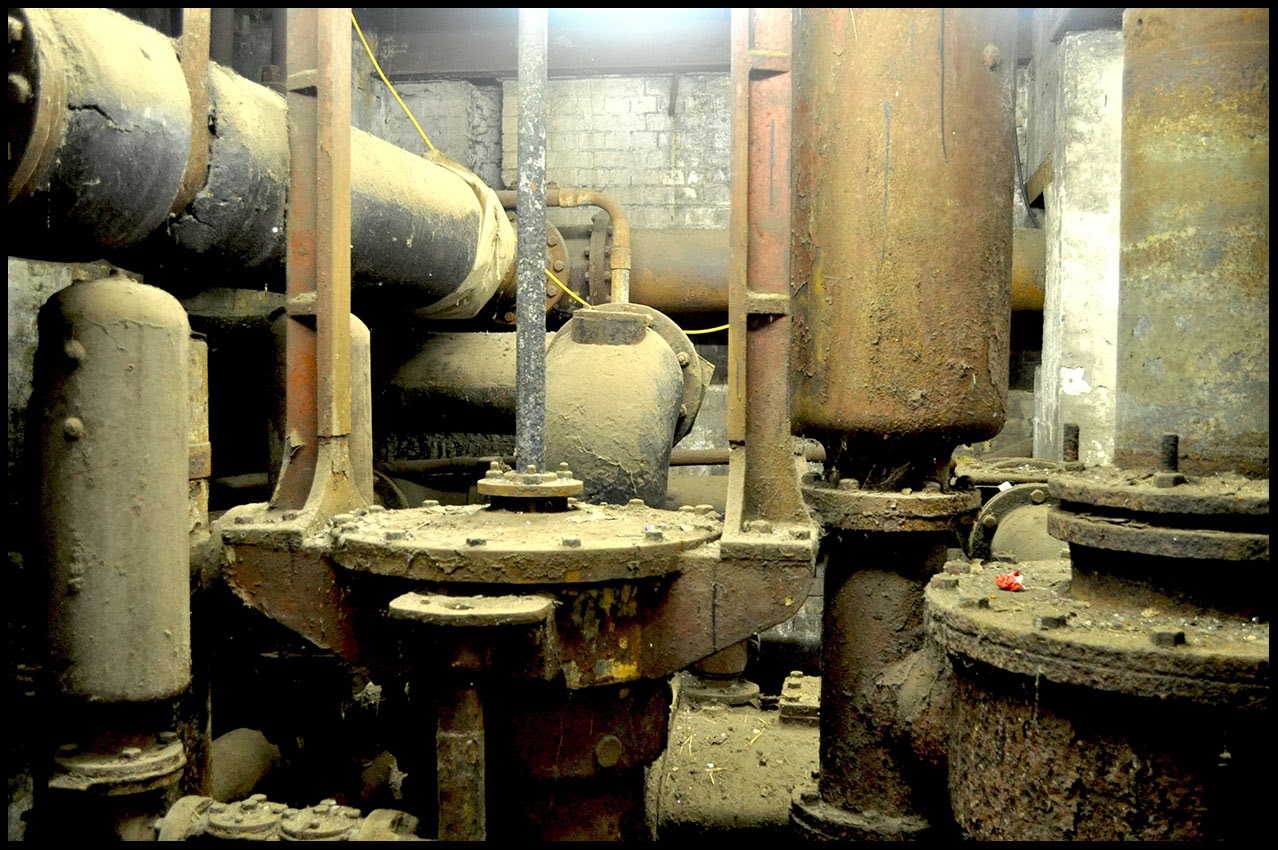 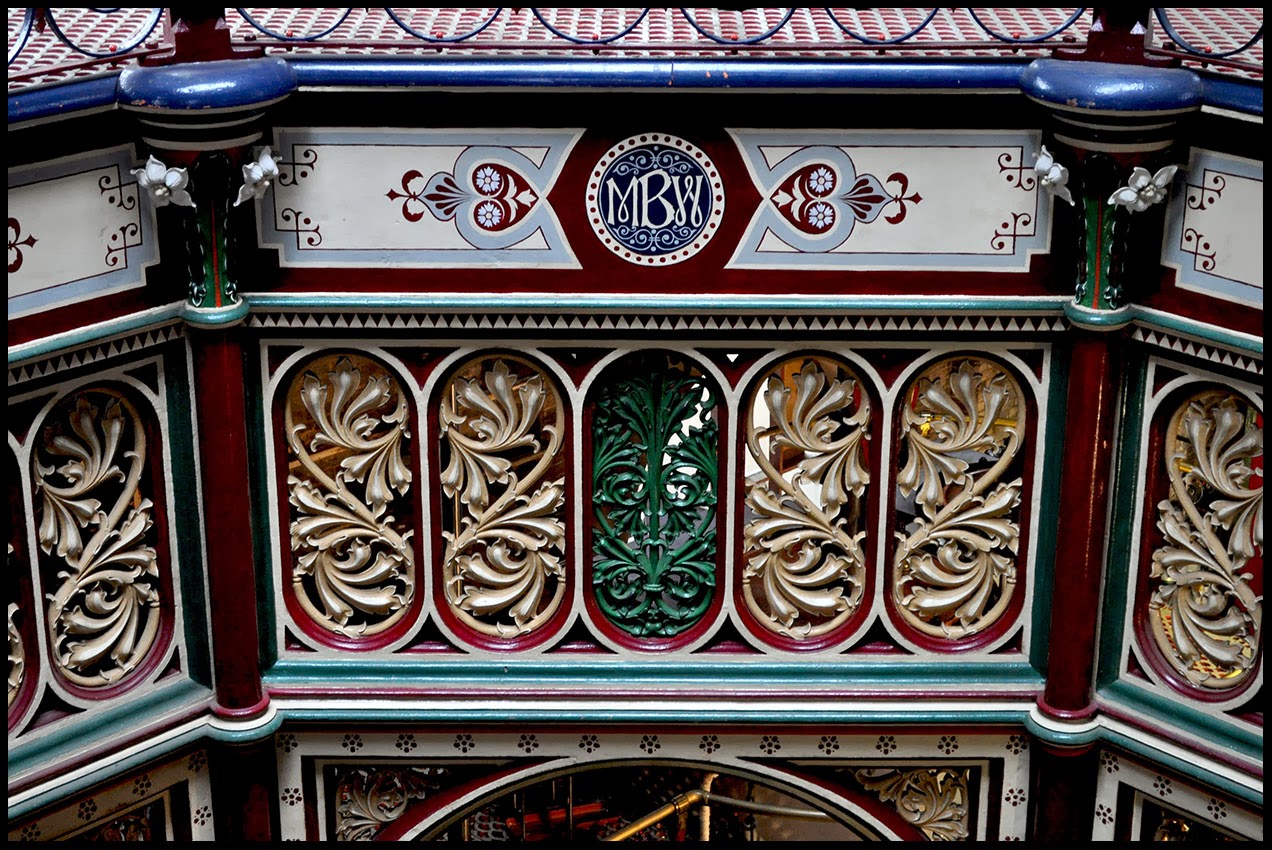 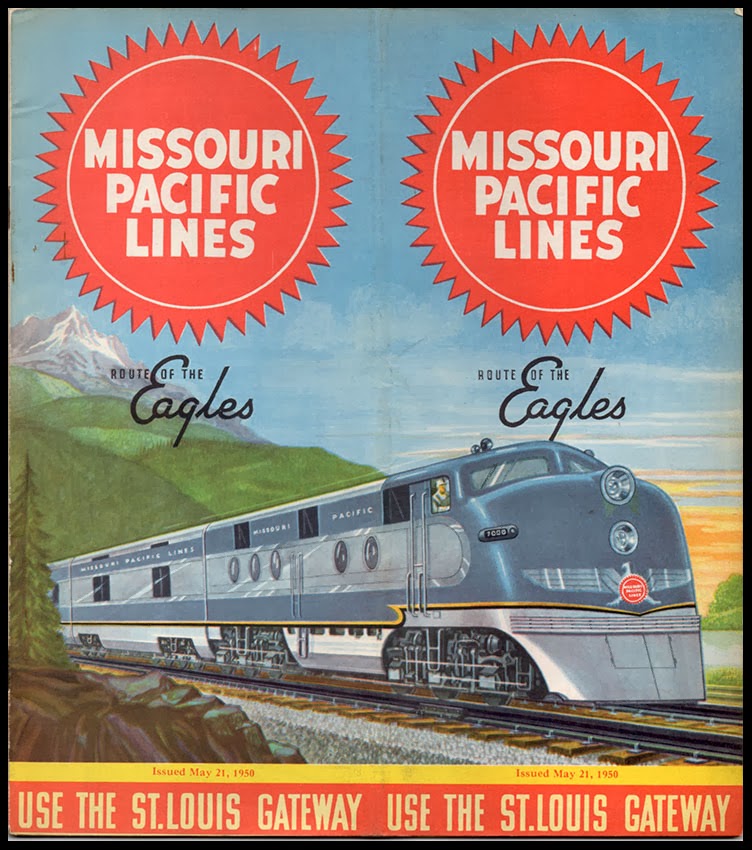 This colourful publication represents a worthy effort by the Missouri Pacific Lines (popularly known as Mo-Pac) to inject some excitement into marketing its services. Styled as the Route of the Eagles it operated a network of passenger and freight trains based in the Midwest city of St. Louis. It was the era of diesel powered streamliners and MPL offered five named trains under their Eagle branding to a choice of destinations, from Omaha in the northwest and the Gulf of Mexico to the south. The aquiline association was chosen from employee suggestions in 1940. The attractions of Pullman roomettes and observation cars were described in detail to tempt passengers on to the trains. Freight handling services featured prominently, including a helpful timetable confirming that a consignment departing Baton Rouge at one minute after midnight on a Monday would reach St. Louis at 3am on Wednesday. 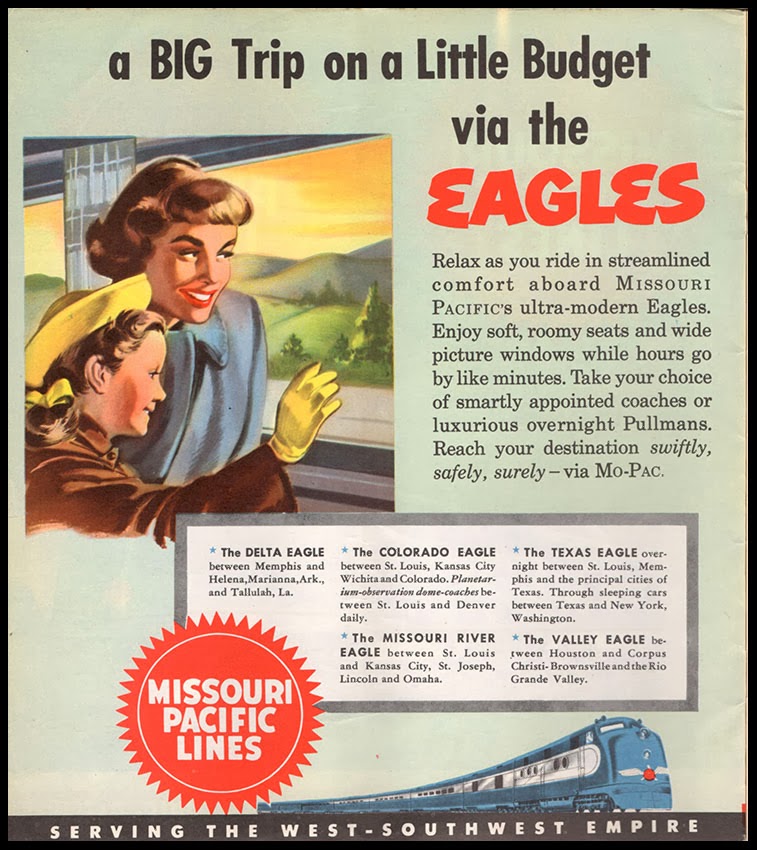 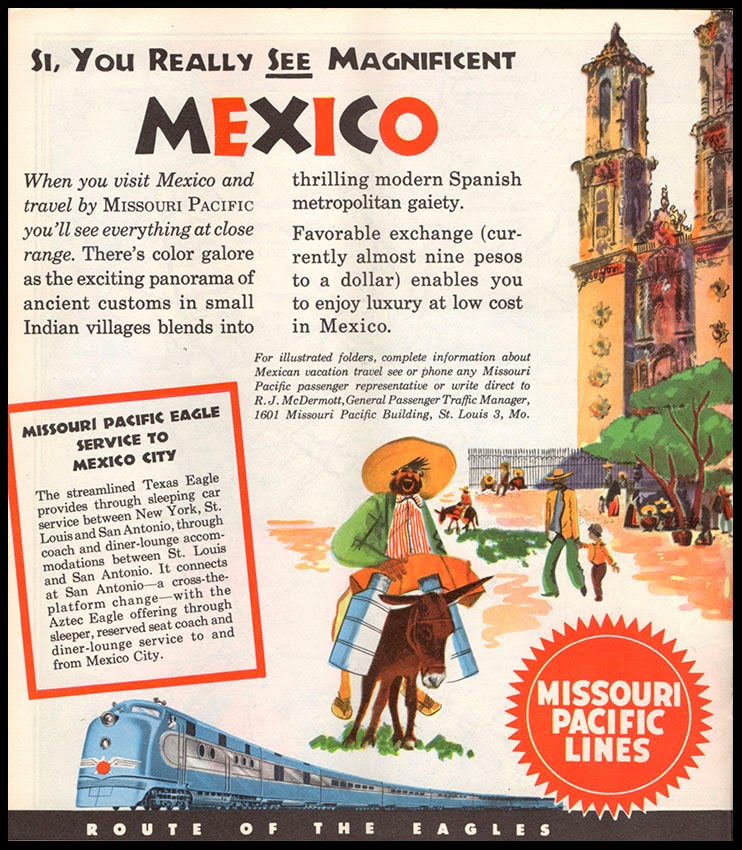 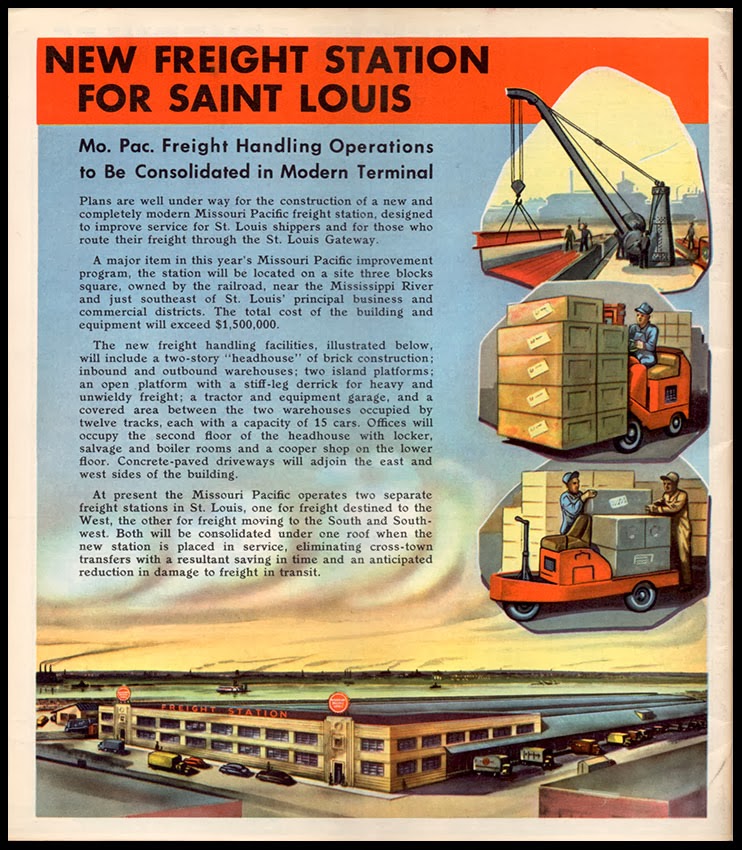 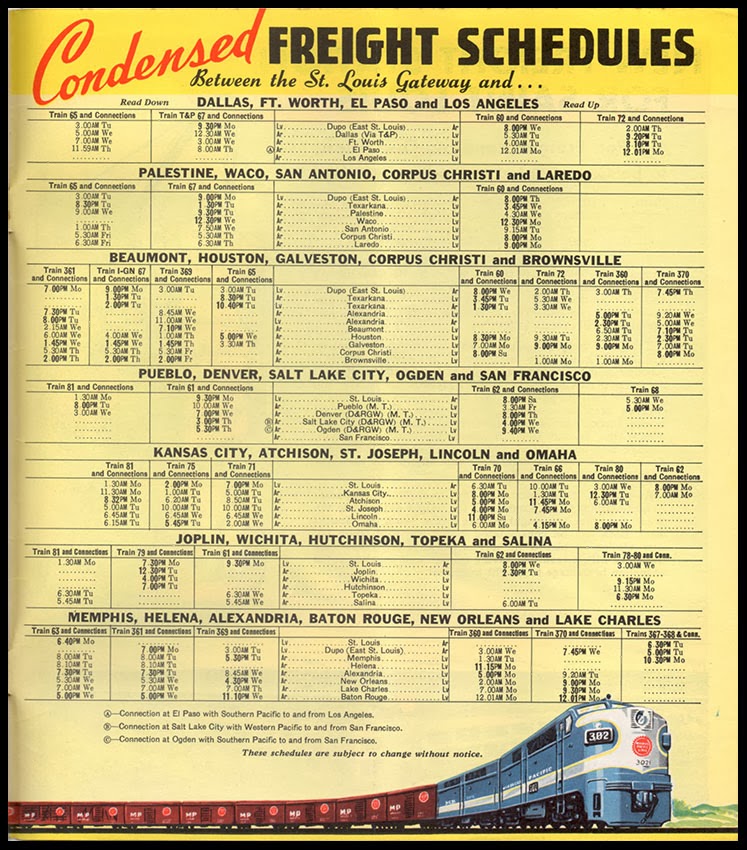 Postcard of the Day No. 62, The London Express Crossing the High Street Much resented by motorists for whom conceding priority to slow and pointless trains is an insult to their pride, the level crossing is on the way to being extinct in Britain. An impatient and individualistic population is increasingly inclined to accept a high degree of risk to life in order to avoid delay and the frequency of accidents at level crossings has soared in recent decades. In the interests of safety Network Rail plans to eliminate as many as possible with all due speed and replace them with bridges, underpasses or diversions. Since 2009 some 700 have been closed leaving more than 6,500 of which another 500 are scheduled for closure. This example in Poole is a genuine curiosity, the only place where a main line crosses a pedestrianised main shopping street ensuring a constant flow. Despite the provision of a footbridge there have been many instances of locals vaulting, dodging or attempting to outrun the barriers as they descend. In response Network Rail installed additional safety features in 2013, including a vault-proof barrier – it remains to be seen whether the youth of Poole will rise to the challenge. The Poole crossing is one of very few to have been the subject of a painting – the former Camden Town Group artist, Henry Lamb captured the scene in a painting of 1953, now in the collection of the National Rail Museum in York. 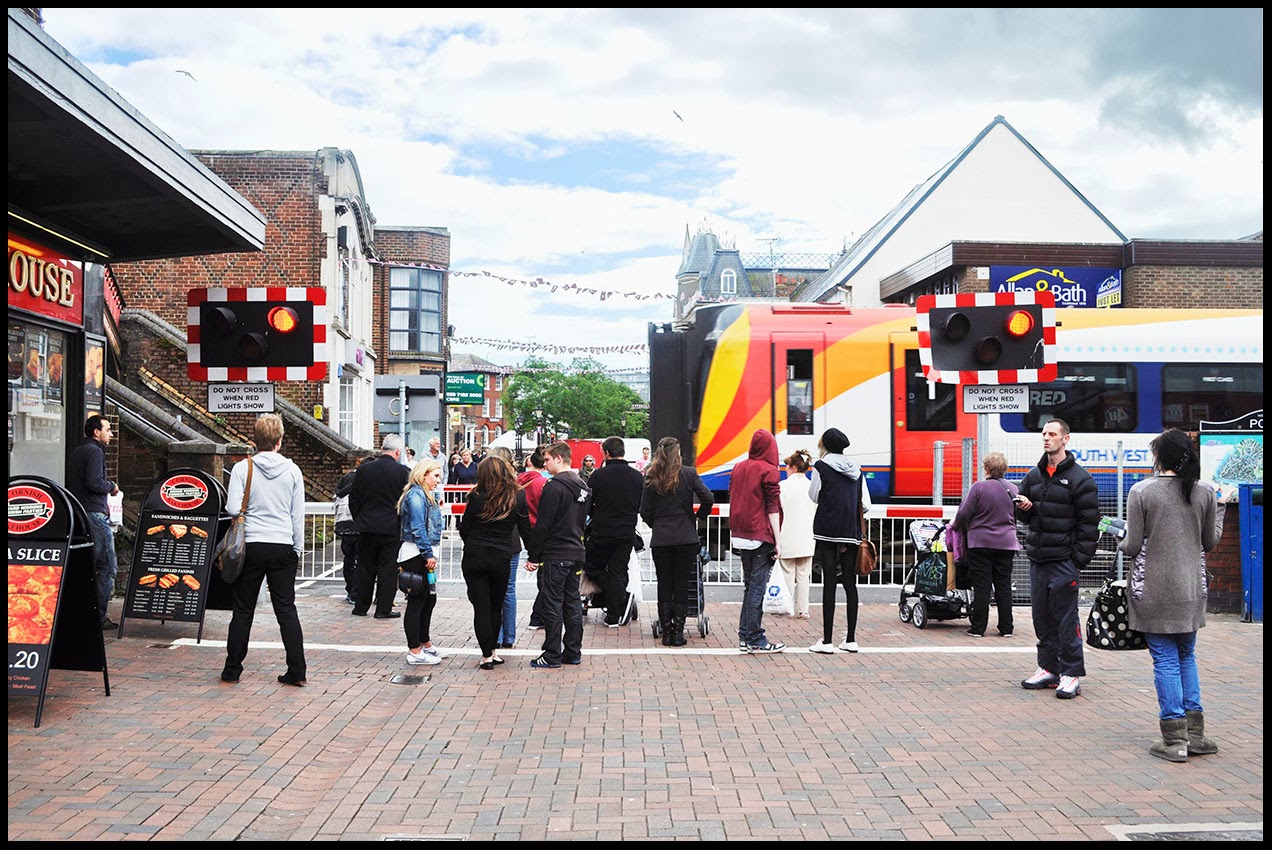 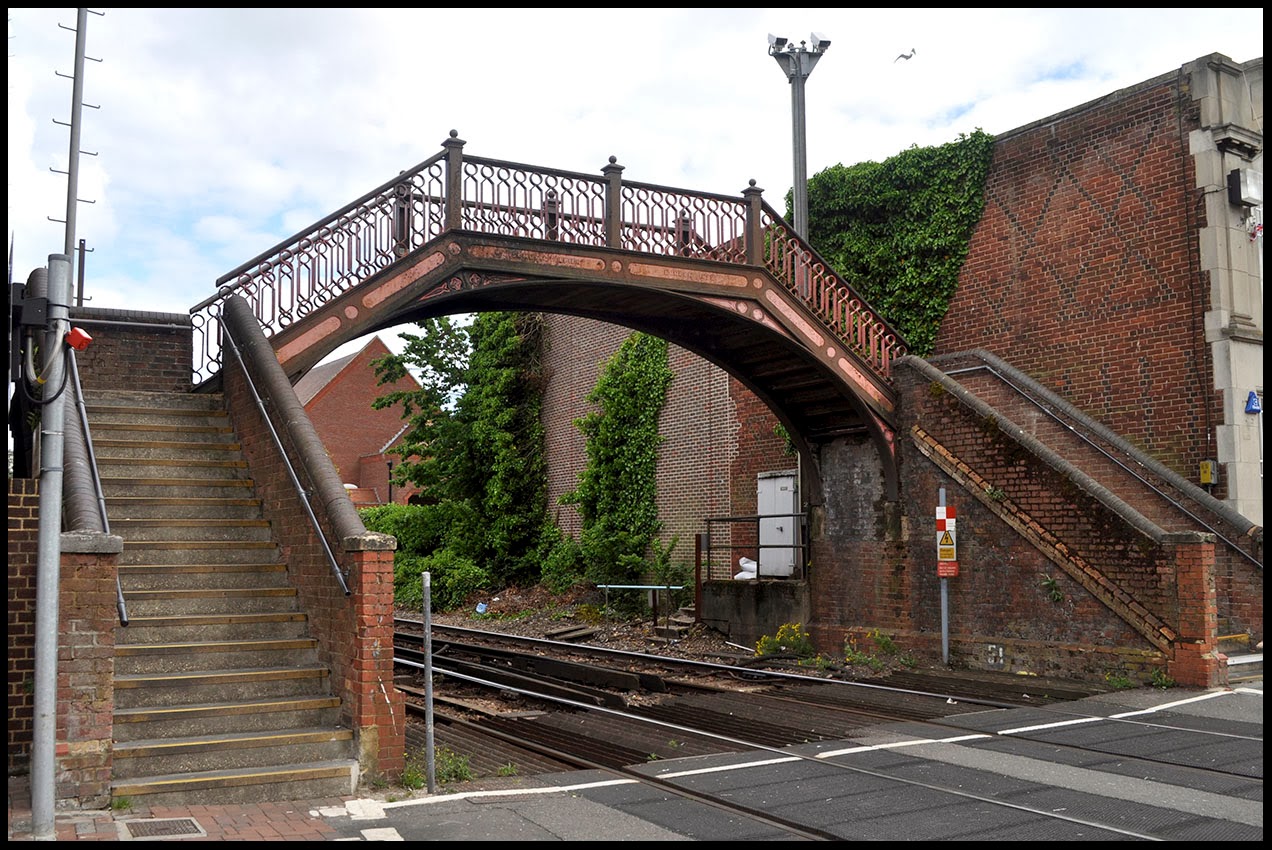 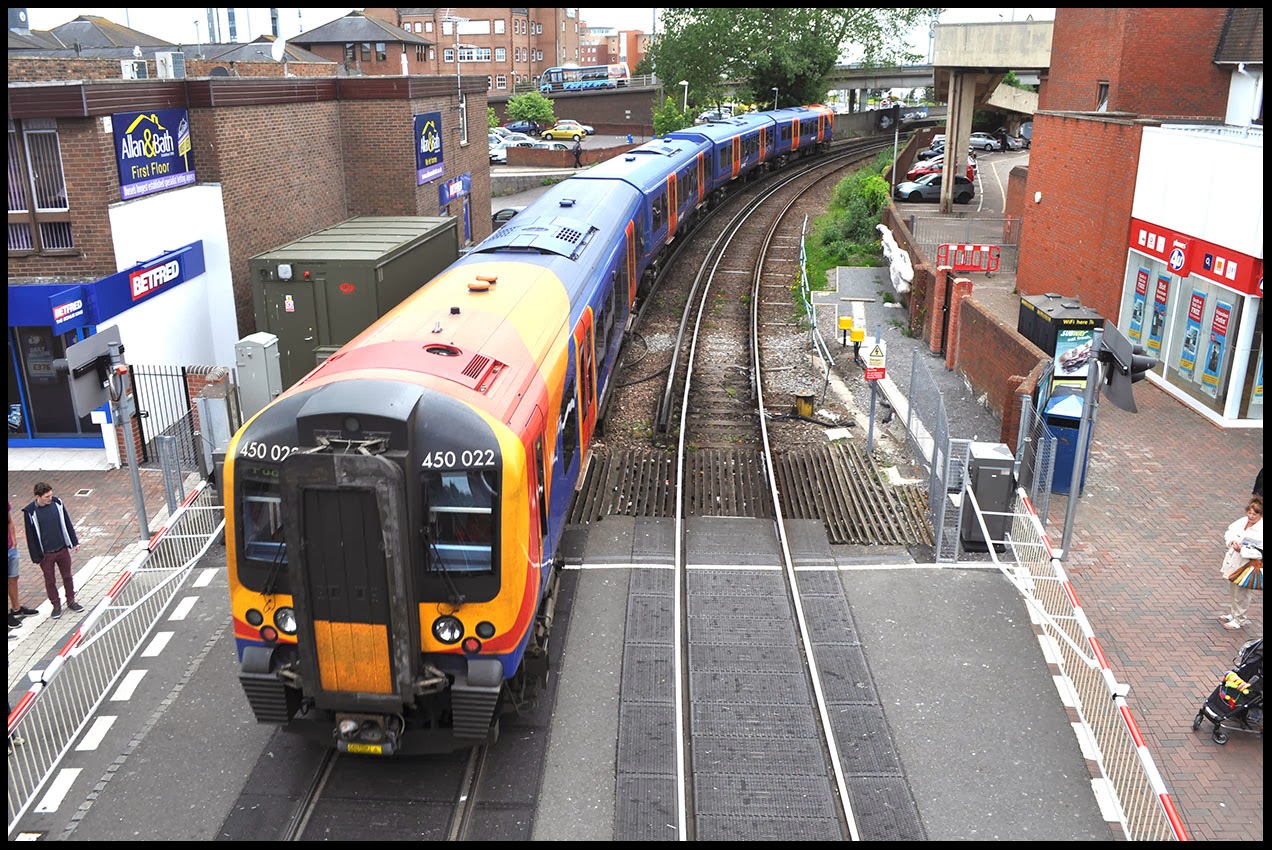