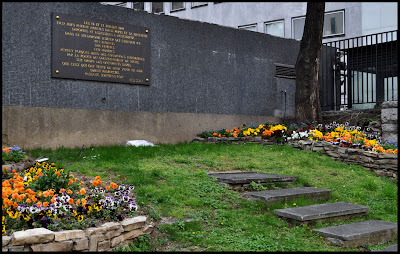 In Eric Hazan’s fascinating book, The Invention of Paris, he observes that the Vélodrome d'hiver is a classic example of a place that was very good, in the sense that as an indoor venue for cycle racing it provided entertainment for millions of Parisians, that later became very bad, as the site of immense human suffering and a staging post along the road to mass murder and genocide. In an era when unremarkable human beings, some of them otherwise decent, were induced to develop a capacity for callous brutality, the events at the Vélodrome d'hiver were exceptional. More than 13,000 Jewish arrests were made by the Paris police on July 16th. 1942 following detailed plans prepared with the enthusiastic cooperation of the Vichy regime, prominent among them the grotesque figure of Louis Darquier de Pellepoix who featured here in an earlier post. Up to 7,500 Jewish men, women and children were interned in stifling summer heat in a covered arena that allowed for little more than standing room and deliberately denied access to any toilet facilities with a single tap to provide water. After 8 days the survivors were transferred to Drancy in the outer north-eastern suburbs before being conveyed by train to concentration camps. This inglorious episode was the ultimate achievement of the cagoulard tendency, ensuring that henceforth their reputation for inhuman cruelty would stand comparison with any Nazi war criminal. 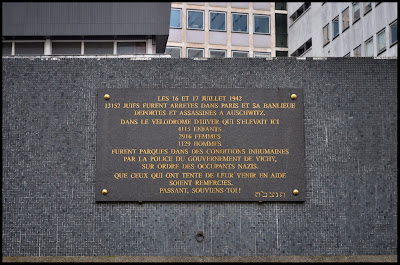 On the perimeter of the former site on boulevard de Grenelle there is a memorial in the form of a small garden and a wall mounted plaque. It is wedged between the entrance to an underground car park and a barrier-controlled vehicle entrance to the Ministry of the Interior building (that replaced the Vélodrome d'hiver after its demolition in 1959), the implacable façades of which form an unforgiving backdrop to the memorial. Some municipal bedding plants and a ragged sward of grass have a depressing perfunctory air and undermine the good intentions that inspired it. Understatement in these features can be a positive but in this instance the installation is catastrophically overwhelmed by its unsightly surroundings. It was a long journey for the French to recognise the enormity of this event and the extent of their complicity, making it all the more disappointing that this monument seems so inadequate. If the intention was to provide a single point of calm amid the clamour of city life for quiet reflection it was doomed to fail in the absence of any tangible or dramatic representation of the tragedy being commemorated that would hold an audience. There is a more substantial memorial featuring a sculpted group of internees at Quai de Grenelle, commissioned by the Mitterand administration in 1993. The figures, carved by Walter Spitzer (himself a survivor of deportation) are naturalistic, deliberately non-rhetorical, and in a quiet way, emotionally convincing. Yet another memorial, Mémorial des Martyrs de la Déportation (photographs below) can be seen at the eastern tip of Île de la Cité. It dates back to 1962 and was designed in what might be called a considered Brutalist idiom by Georges-Henri Pingusson – the harsh geometry and unyielding surfaces are surprisingly effective in conveying a sense of the enormity of the crime. 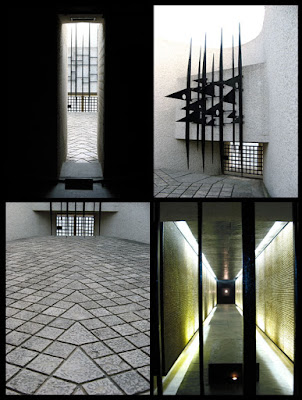 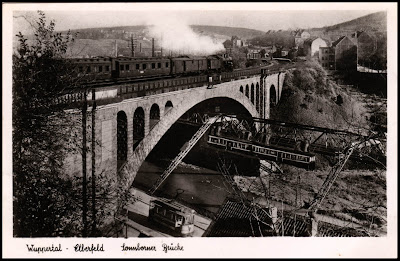 Enthusiasts for urban planning get very excited about creating multi-level locations. The idea of elevating transport and services into the infinity of the atmosphere seems like an excellent recipe for maximising efficiency in the use of space. In these postcard examples we see three or even four levels intersecting like spatial vectors. They are not as popular with the general public who have an aversion to endless flights of steps or a simple dislike of vertigo. For myself, the sensation of vertigo is something to be savoured and I find these locations immensely satisfying despite the widely held view that they disfigure the landscape. These cards are all from Germany or the USA and support my contention that the great 19th. century American cities of the North-East and Mid-West were primarily built upon a Teutonic template. 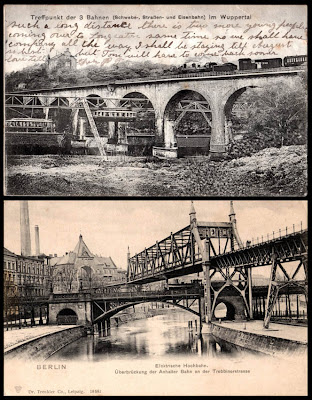 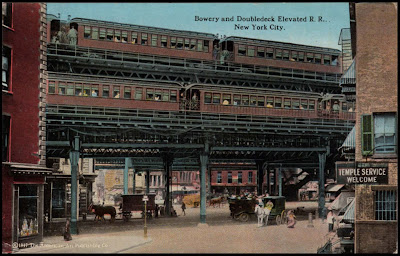 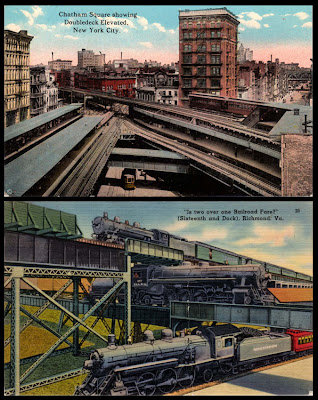