Down at the Automat 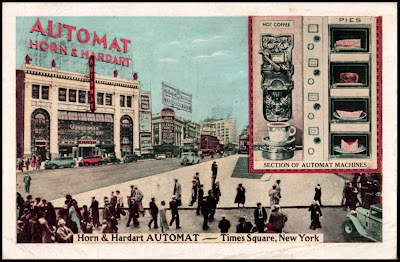 The concept of a coin operated cafeteria was born in Berlin where the Quisiana was in operation as long ago as 1900. The Horn & Hardart chain of Automats developed in Philadelphia and New York a few years later and at their peak in the 1940s more than 50 were trading in New York City. In the era of Fritz Lang’s Metropolis this idea must have seemed an inevitable step towards a fully mechanised future where human labour would be concealed where it couldn’t be eliminated. Human contact would be minimised while the human hand hovered behind the scenes and reloaded the rotating dishes as required. For Edward Hopper the automat was a perfect vehicle for his vision of the impersonal in modern life and his 1927 painting of the same name captured the sense of human isolation in the solitary female figure who stares blankly into her coffee cup as if the contents were absinthe. When I visited New York in the late 1960s I took a small step into the future with a handful of nickels and dimes into a Horn & Hardart where the coins were exchanged for a slice of cherry pie that put me in mind of Claes Oldenburg’s re-creation of all-American plenty in the form of slapdash facsimile fruit pies. The automat is another of those deceptive concepts that belong to a future that never quite came to pass and the last example in New York closed in 1991. 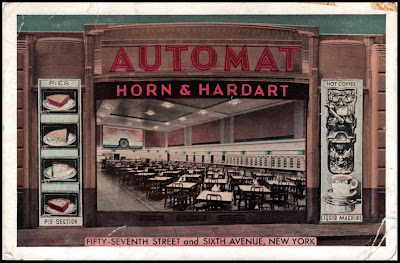 Face Each Day With Confidence 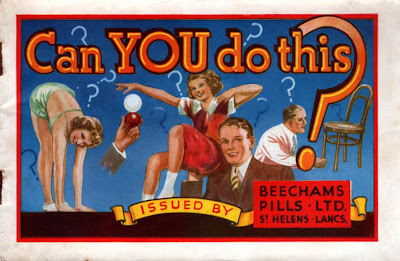 This clumsily drawn pamphlet from the 1930s offers the constipated consumer easy access to a whole range of skills and accomplishments that you never knew you needed. The ability to lift a chair by one leg with the use of only one hand may be just the sort of party piece to enhance your social acceptability. If there’s a suspicion about that you are a tedious mediocrity the remedy may be in your own extended hand gripping a chair at every opportunity. Possessing the strength to throw a winsome growing child across the room as shown here is the perfect way to indulge your aversion to children and convince your audience that you’re always good for a laugh. Just keep a smile on your face and all will be well. Smiling isn’t easy if constipation has you in its grip. The laxative power of Beecham’s Pills, a beguiling compound of ginger, aloes and soap, is certain to restore your good humour and transform you into an object of universal admiration. 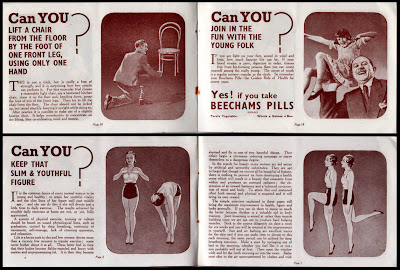 Beecham’s Pills are no longer on sale but the name persists in use, attached to a range of remedies for the common cold produced by GlaxoSmithKline. As a company, Beecham expanded from its Victorian origins to acquire a large portfolio of famous brands but a series of mergers and takeovers led to the eventual extinction of the business name with its final absorption into GlaxoSmithKline in 2000. One of the great Victorian brands was consigned to commercial oblivion. 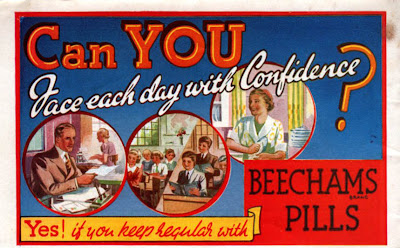 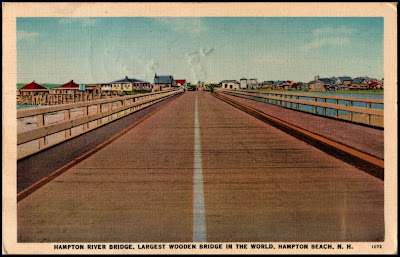 The distinction of being the longest wooden bridge in the world is mildly interesting. Far more compelling is the relentless perspective and minimalist flavour of this reductive image. The empty roadway, bereft of landmarks, races to the distant horizon where a linear cluster of character-less buildings offers little incentive to complete the crossing. 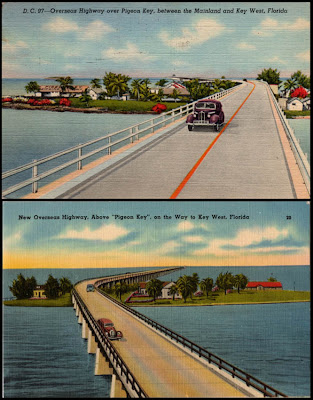 While 20th. century modernists like Malevich, Albers, Ad Reinhardt and Yves Klein experimented with the progressive elimination of content in their paintings something similar was happening in the humble world of the linen postcard. Starkly reduced images combining supersonic perspectival plunges with wedges of flat colour and perfunctory drawing appeared on postcards, especially in images of the interminable bridges and causeways to be found in Florida. The postcard wizards at the Curt Teich company in Chicago seemed to have a sixth sense of how these images looked their best with a linen finish. 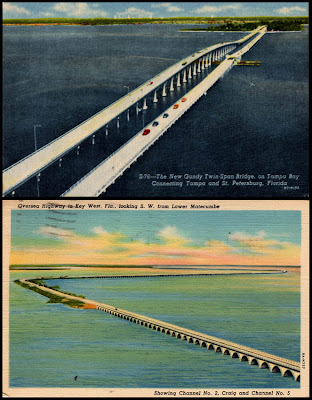 Culturally these images have some affinity with the essentially cinematic sense of the wide open spaces of the Prairie states, at the same time they connect with the existential idea of the endless highway – forever leading somewhere new, forever leaving the past behind. 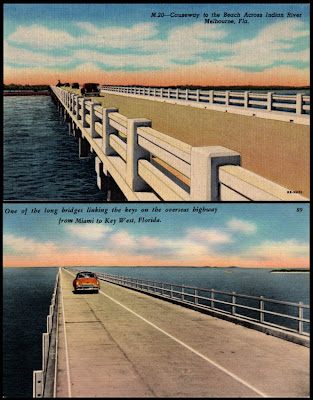 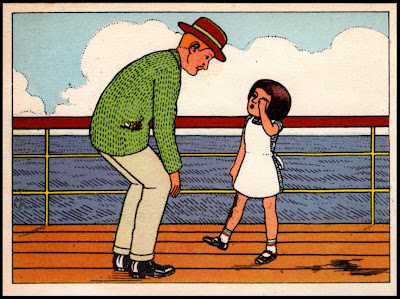 Another literary excursion. Today we confront the disconcerting world of Ant and Bee, Termite and Pollinator united in mischief for the entertainment of wayward toddlers. Our diminutive heroes inhabit a universe of rainbows, strange lands and kind dogs, taking care en route to introduce their young readers to an improving selection of three and four letter words. Improbably slender storylines, courtesy of Angela Banner, are brought to life in enigmatic ligne clair illustrations by Bryan Ward. If you have a taste for this type of linear clarity, formal repetition and minimalism you can find out more about these modest little books by following this link. Evidence of the existence of a dedicated group of Ant and Bee obsessives can be found in the astronomical prices being charged on Amazon. 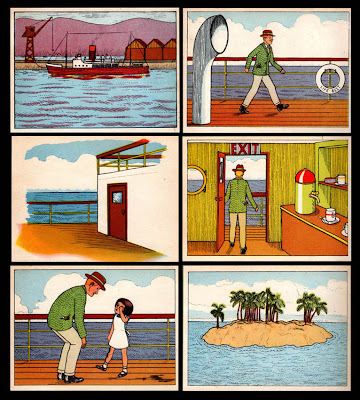 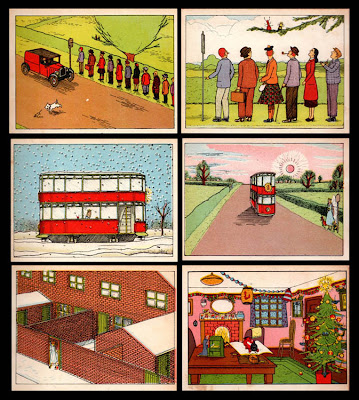 Posted by Phil Beard at Thursday, November 25, 2010 No comments: 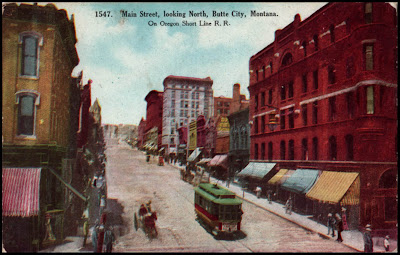 In 1917 Dashiell Hammett, then employed as a Pinkerton Detective was hired by the Anaconda Copper Company in Montana to break a strike. First-hand immersion in the violence, intimidation and murder directed at the strikers and unions was a radicalising experience for Hammett that, decades later, would result in his appearance in front of the House Un-American Activities Committee to answer for his Communist affiliations. Writing detective fiction for Black Mask, Hammett drew on these experiences and recreated the Montana city of Butte as Personville (pronounced Poisonville), a cesspit of venality where civil society had ceased to exist leaving organised crime in charge with the assistance of a corrupt police force and judiciary. 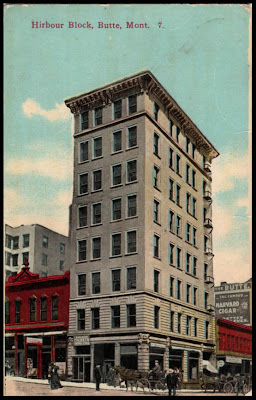 These bleak postcard images seem to reflect Hammett’s vision of a small city with all the vices of a much larger one. The stark office blocks have a meanness and lack of grace consistent with a place where brute force had a habit of prevailing over the rule of law. The blurred and anonymous figures appear weighed down by the despotic power of their criminal overlords. Hammett’s short story published with the title Poisonville soon expanded into a full-length novel that appeared in 1929 under the title of Red Harvest. The world still waits for the definitive Red Harvest movie. For over a decade Bernardo Bertolucci incubated a Red Harvest project, a screenplay was written but it all came to naught in the late 1980s and there it rests. 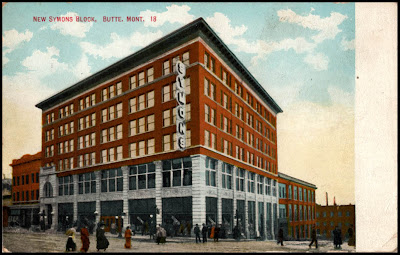 Posted by Phil Beard at Wednesday, November 24, 2010 No comments:

Postcard of the Day No. 41, Les Escamoteurs 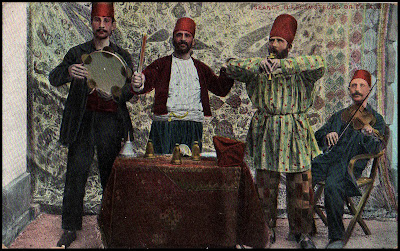 The dark arts of deception are the theme of today’s card. The venerable cup and ball trick with the added distraction of unorthodox musical accompaniment from an impassive trio of dubious origin. The exotic disharmonies of pipe, fiddle and tambourine attract the credulous. The stage is set for the triumph of Oriental guile over Western naïveté.
Posted by Phil Beard at Wednesday, November 17, 2010 No comments: 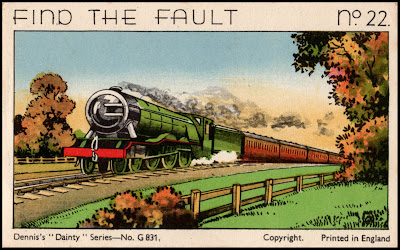 Today we pay a return visit to the world gone wrong as conceived by the twisted intellects at Dainty Productions. Fault finders everywhere can pit their wits against the masters of misinformation. I’m going to risk my reputation by suggesting that the white jet of steam in the centre of No. 22 should be shown escaping from the cylinder at the front of the locomotive. There’s no such easy resolution to No. 20 where a young woman transforms a ball of wool into a fetching sock for the man in her life. Should we be looking closely at the knitting needles for a technical anomaly or, more troubling, are we facing a moral defect indicated by the stiletto heels or the seductive sheen on the nylons? 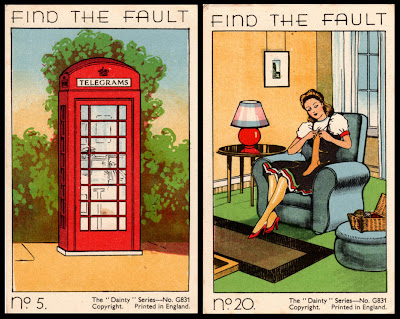 There are limits to how much time can be spent staring at a coal scuttle but there are other pleasures to be taken from these pictures. I have an incurable fondness for the ligne claire style in which these images have been transcribed. It is the perfect genre for describing a universe of orderly disposition in which is concealed a single but shocking flaw. The purest form of ligne claire is to be found in the drawing of Hergé but there are many other anonymous practitioners. Angela Banner’s Ant & Bee books are illustrated in this idiom to great effect by Bryan Ward. At their best they possess a charge out of all proportion to their meagre storylines and modest intentions. More of Ant & Bee at a future time. To see an earlier trip to the world of Find the Fault please follow this link. 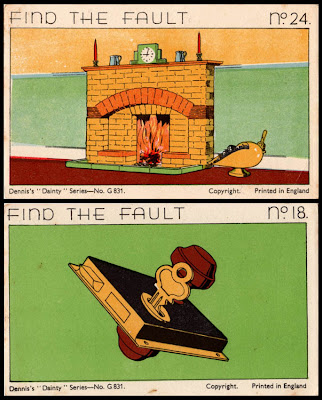 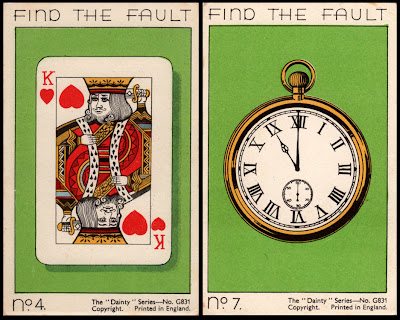