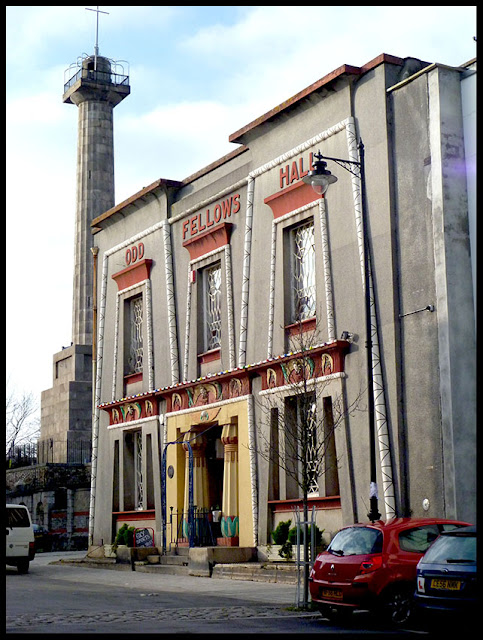 Since 1700 the shape of Devonport has been dictated by the requirements of the Royal Navy. Over a period of 250 years almost every inch of the 4 mile waterfront came under naval control. The town is gradually being reshaped as surplus pockets of land become available for development. The dockyard is screened from public view by towering block built walls topped with razor wire that shape the street plan. The dockyard of today is more a place of heavy engineering and nuclear technology than a haunt of Jolly Jack Tars. Decades of cost cutting and outsourcing have reduced the demand for civilian labour putting great stress on the local economy. When shiny new housing schemes on ex-MOD land are unveiled the reality is that few local residents will have the cash to relocate into the new developments. Regeneration schemes are bearing some fruit after decades of gestation and contrary to the spirit of the times, the earthmovers and housebuilders are hard at work. Public buildings have been given a long overdue makeover and some singularly depressing post-war blocks have been replaced with new-build low-rise housing of slightly more sensitive design. All of which brings us to Ker Street where what remains of the Devonport Ensemble can still be seen. 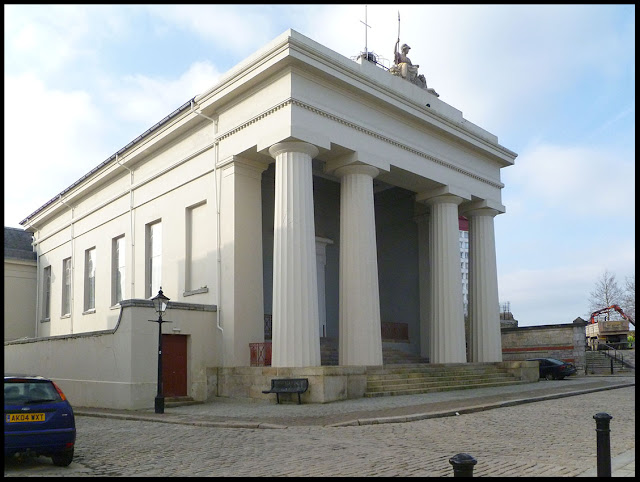 The most eccentric presence is the Egyptian styled, Grade 1 listed Odd Fellows Hall located on a corner, diagonally opposite to the Classical bulk of the recently renovated Devonport Town Hall. The third survivor is the Doric column that commemorates the renaming of Devonport in 1824. The fourth building in the ensemble was the Mount Zion Calvinist Chapel, designed in the Hindoo style that stood next to the Odd Fellows Hall until demolition in 1902. Remarkably all the buildings in their variety of styles were the work of a single architect, Plymouth based John Foulston (1772-1841). Conceived and constructed as symbols of a renewed sense of civic identity in just a few years (1821-24), the grouping of disparate stylistic influences has been held up as an exemplar of late-Georgian eclecticism. 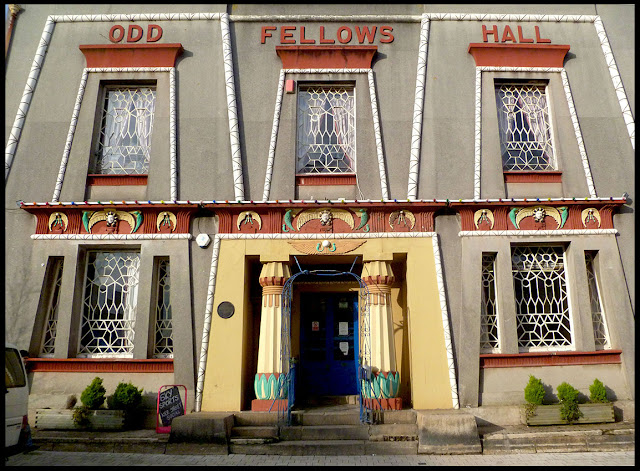 The Odd Fellows Hall is the building that catches the eye with its startling colour and ornamentation. It began life in 1823 as the Civil and Military Library and after a variety of uses it became the premises of the Ker Street Social Club in 1968. In the last few years it has settled into a new and less oppressive townscape, courtesy of regeneration, and recovered some of its former dignity. However despite the cheerfully gaudy frontage and the abundance of lotus leaves, palm fronds and bamboo motifs the building is on the English Heritage At Risk Register as requiring extensive repairs to secure its future. Further west in Penzance is a building known as the Egyptian House that exhibits many of the same exotic design elements but despite the close affinity with the Devonport building there is no evidence that Foulston was the architect. The Egyptian House displays a higher standard of finish and greater elaboration but the architect’s identity remains unknown. 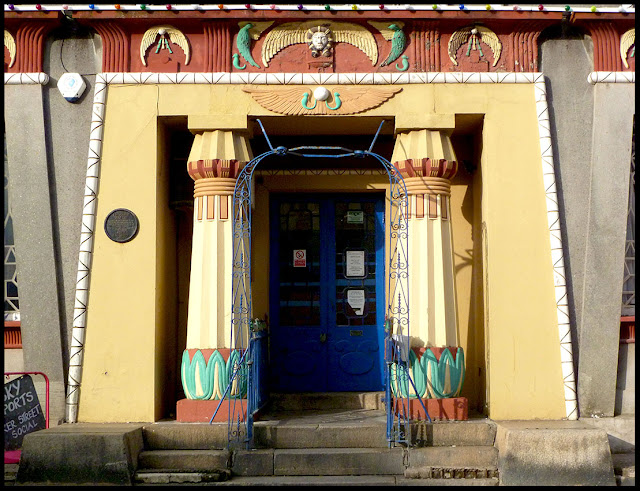 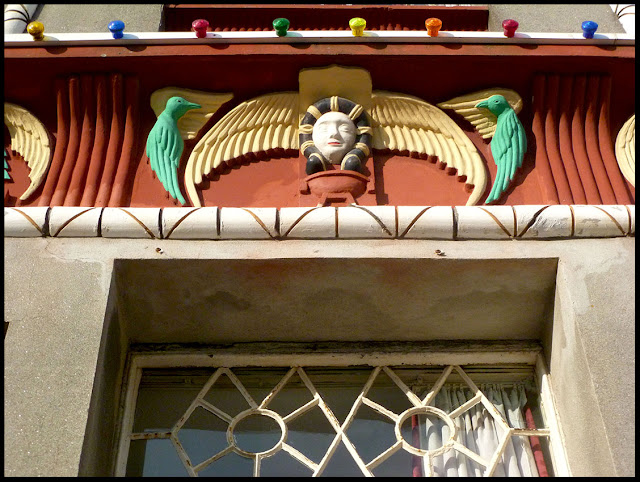 Posted by Phil Beard at Wednesday, January 30, 2013 No comments:

Into the Crockwell Universe 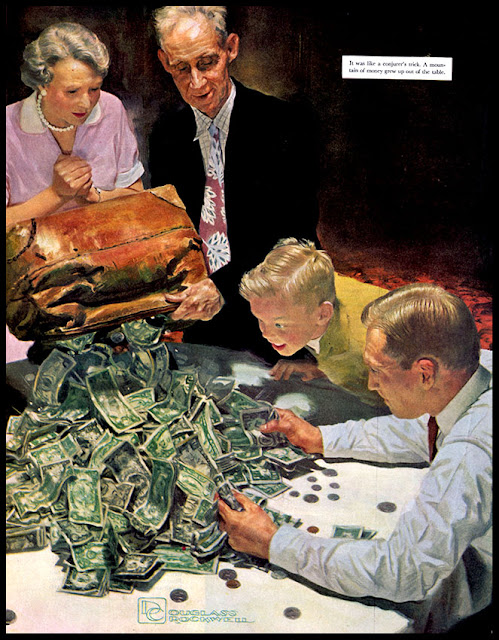 I have written before about Douglass Crockwell’s strange double life as avant-garde film maker and mainstream commercial illustrator. The fact of his personally driven cinematic activities throws an odd light on his illustrations, tempting us to look for hidden depths below the always perfectly finished surfaces. Every tilt of the head or furrowed brow, a clenched fist or tension in the shoulders, an outstretched hand, a vacancy of expression – it easily tempts us to conclude that the surface contentment is an illusion and deep unresolved emotional conflicts simmer below. This may be no more than wishful thinking, guided by an erroneous assumption that an interest in experimental film would be incompatible with accepting a middle class status quo. Perhaps Crockwell was perfectly adapted to his dual existence and had no difficulty pursuing two totally unrelated projects. Perhaps his illustration work was a way to subsidise the unremunerative film work. What can be said with some certainty is that the subtle articulation of light and shade through pictorial space betrays the presence of a cinematographic eye when it comes to illustration. 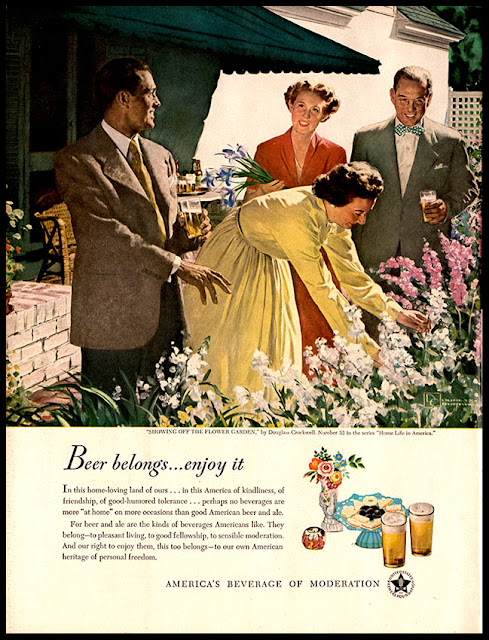 This selection with one exception is drawn from the extended series of over a hundred illustrations commissioned for the Beer Belongs campaign that ran in American magazines during the mid-1950s. The aim was to lift the consumption of beer out of the blue collar gulag and reposition it as the first choice of the educated, materially successful middle class. The air of studied informality under pressure and alcohol induced jocosity supplies more than a few unintentionally comic images. Taken together they offer a remarkable survey of mid-century affluence – there’s a great selection to be seen on Robin Benson’s Past Print blog. The definitive guide to Crockwell’s excellence is to be found at the Alphabet of Illustrators. Final thought – Rockwell or Crockwell? It’s Crockwell for me; he may have the occasional wobble into sentiment but he never takes us to the maudlin extremes that Rockwell routinely inhabits. The Crockwell composition has a spatial complexity and ingenuity that Rockwell never even aspired to. Crockwell made inspired colour choices to create mood or sometimes subvert it while Rockwell simply coloured in his modest tableaux. Rockwell’s triumph was to ingratiate his way into the American Pantheon with prodigious quantities of flattery and treacly charm. It may be that Crockwell has the last laugh – the elderly moneybags in the first illustration has more than a passing resemblance to the great curator of the American Dream and just may be a sly reference to Rockwell’s formidable earning power. 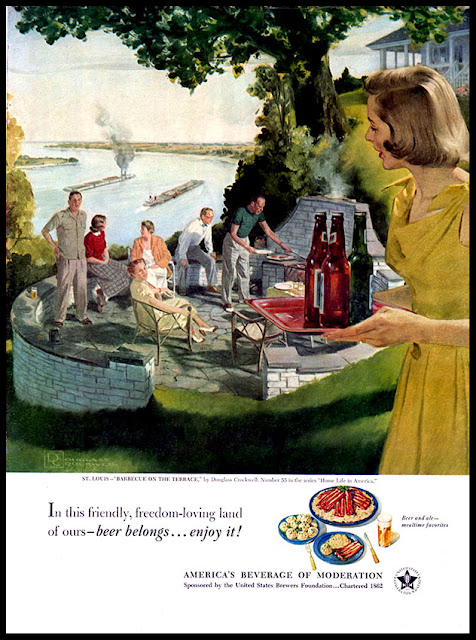 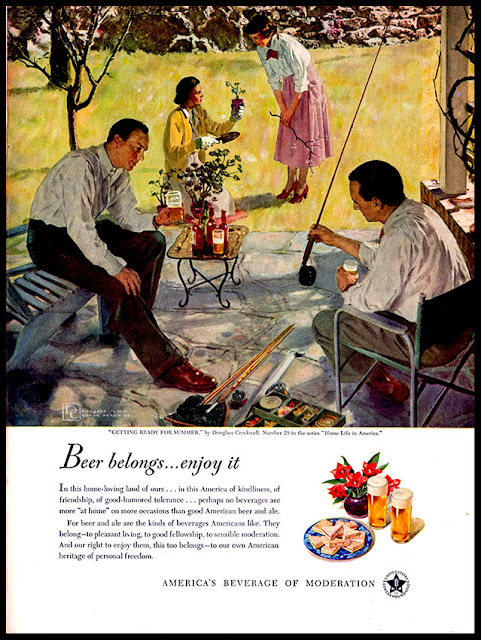 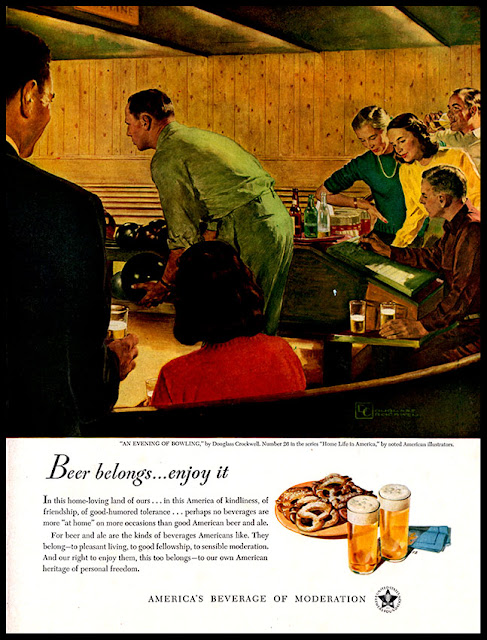 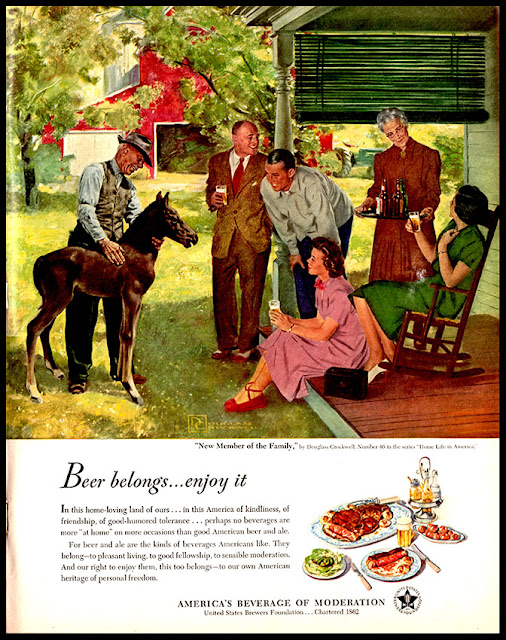 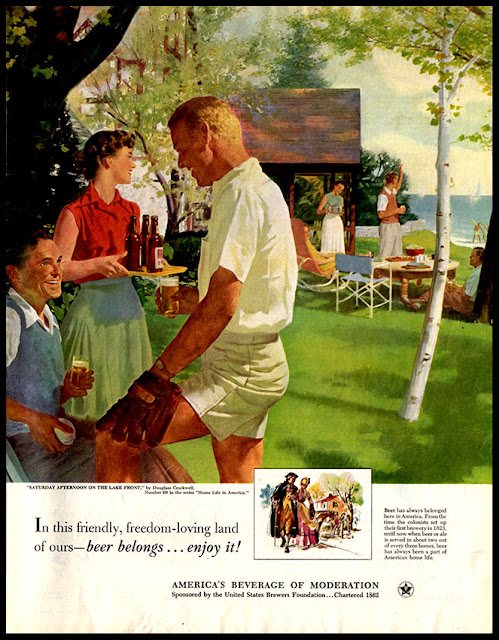 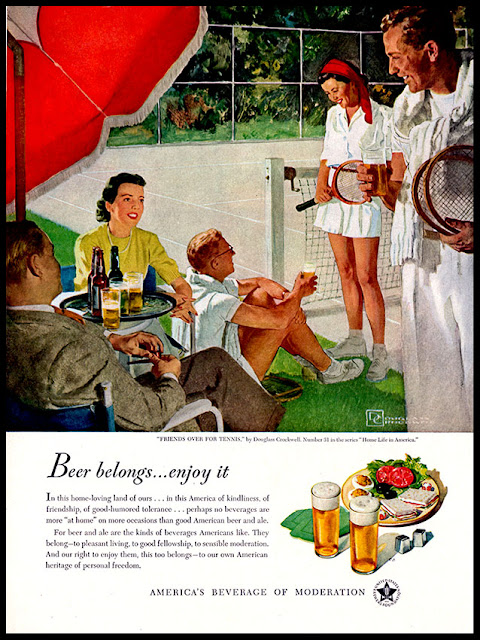 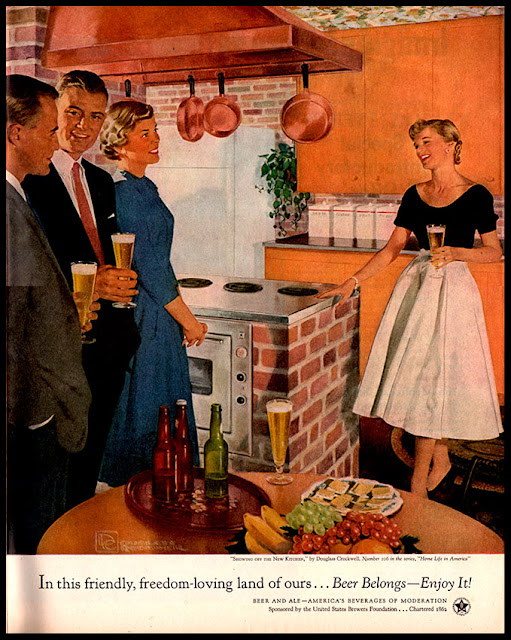 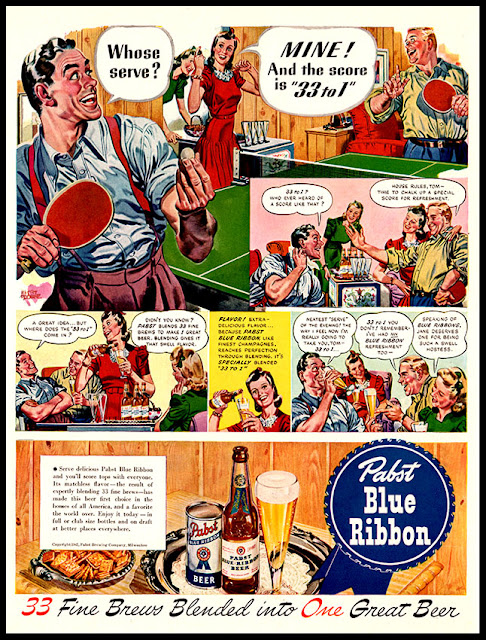 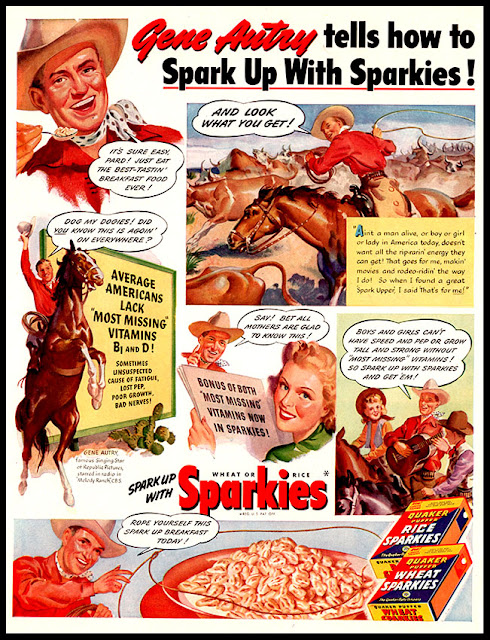 There was a time when it was widely believed inside the American advertising industry that they were in the business of engaging the higher faculties of their audience. A lofty dialogue between elevated intellects of equal esteem. These pretensions died a lingering death as the extended passages of purple prose favoured by old school copywriters surrendered to snappy one-liners and vulgar sloganeering. When it was revealed in 1931 via a Gallup survey that almost twice as many newspaper readers preferred the comic section to the news pages in their weekend papers, advertisers abandoned any attempt at educating the consumer and embraced the visual conventions and linear narratives of the comic strip to grab the attention of the public. Mini-dramas expressed in picture sequences with speech balloons were easily digested especially when the services of much loved cartoon characters were engaged. Placing these ads in the pages of the comic sections made for some useful confusion between editorial matter and paid-for publicity. Anxieties about body odour, constipation, bad breath, dandruff, weight problems, insomnia and lifeless hair were dramatised and relieved, courtesy of the astounding virtues of the product. An idle reader was easily deceived into thinking that the special pleading of the advertiser was objective fact. This was taken a stage further when some agencies produced ads that stylistically mimicked reportage to further confuse the public. 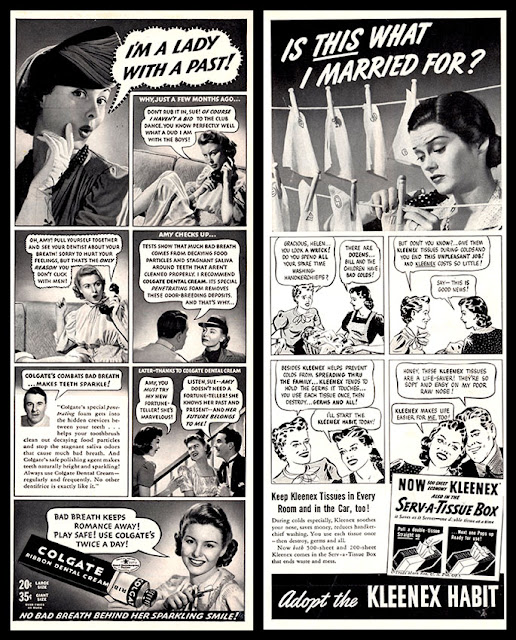 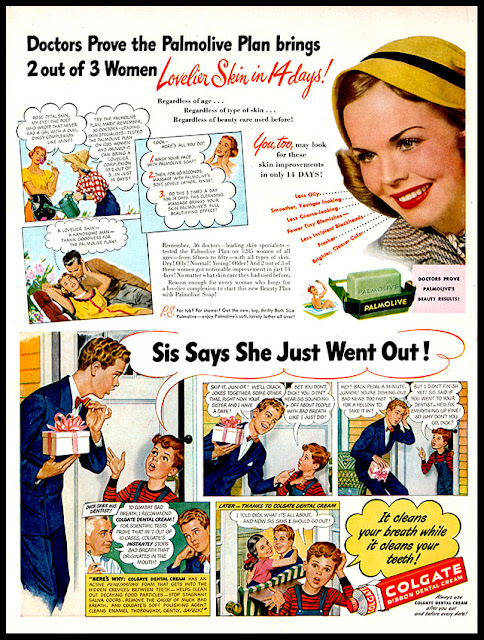 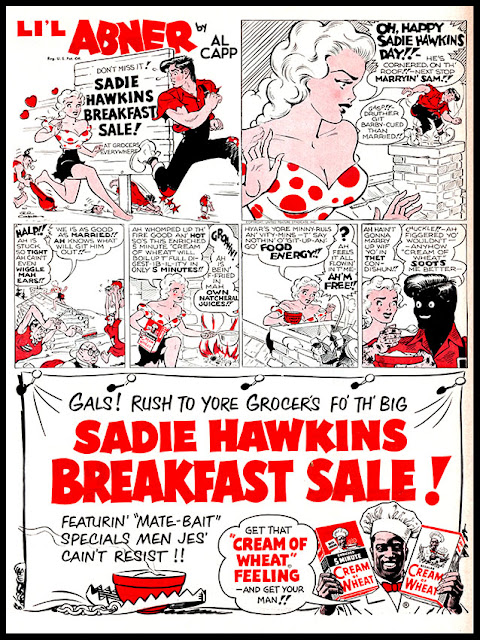 Shifting mountains of unsold breakfast cereal in the direction of young mouths became much easier when producers could address the junior consumer in the medium of their choice. Sales of Grape Nuts were the first to benefit from the comic strip approach, encouraging competitors such as Kellogs (with Mutt and Jeff on board), Cream of Wheat (with the vacuous Li’l Abner) and Ralston (aided and abetted by Dumb Dora) to follow suit. They don’t bear much close examination. The dialogues race along in the conventional manner only to stumble over wordy explanations of the wondrous merits of the foodstuff. The aim of the exercise was not to convince via rational debate but, less ambitiously but more importantly, to associate the product with entertainment values. 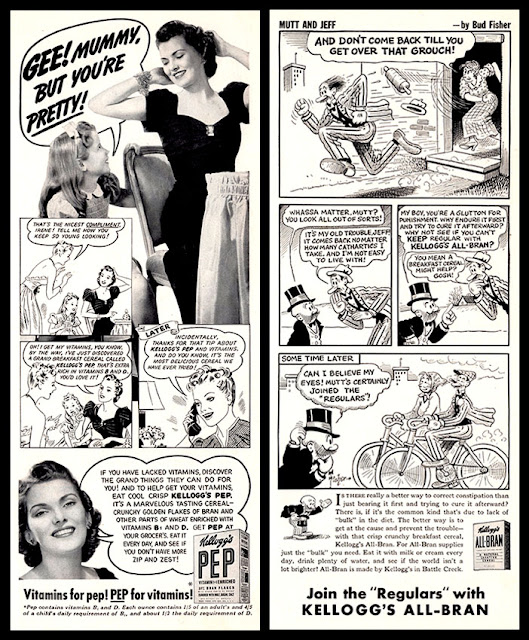 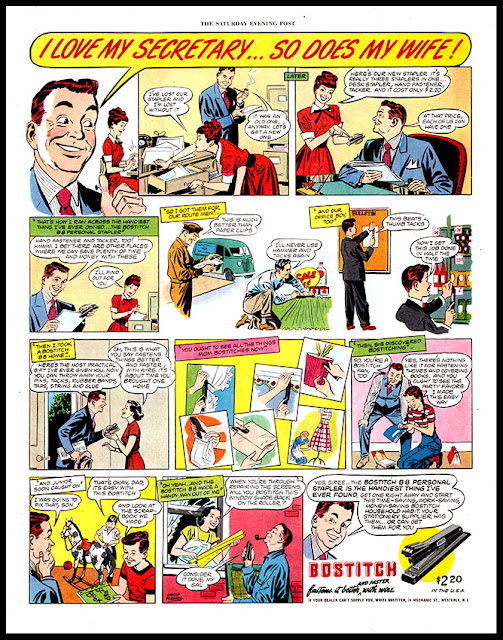 It wasn’t uncommon for dialogues to descend into astonishing inanity, bordering on self-parody. When Pabst brewers employed a comic format, the cartoon characters were lumbered with speech bubbles that in the real world would have lead to a lifetime of incarceration on mental health grounds. But the casual reader would skip the explication and be left with the generalised sense of slightly manic bonhomie communicated through the drawings and hopefully remember Pabst on the next trip to the liquor store. The hero of the Bostitch stapler strip has repackaged his entire existence with the aid of a stapler by the time he staggers into the final frame for a delirious summing-up speech. Elsewhere Scotch tape gets our heroine’s love life back on track by repairing a broken fingernail and mending a torn skirt. It would be callous to be unmoved by the key role of the donut in winning wars as explained here by the apostles of deep-fried cakes, the Donuteers. In another post we will look at how British advertising, visually timid and class-obsessed, slowly took the comic strip on board. 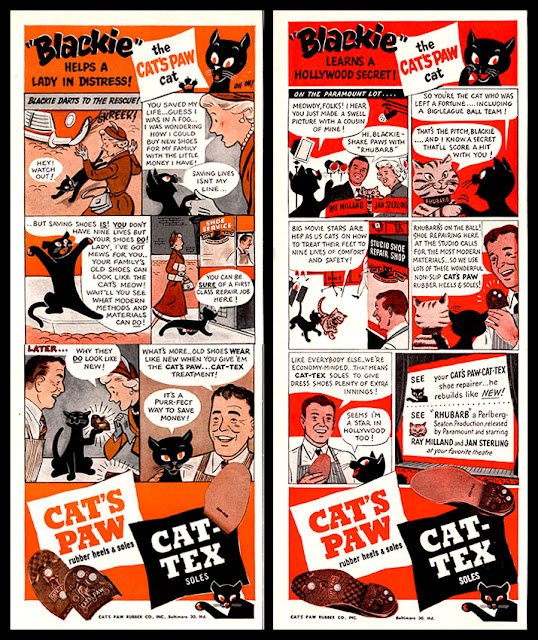 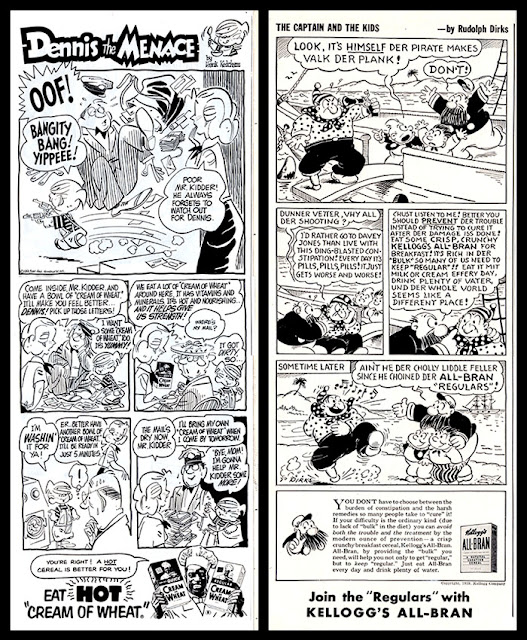 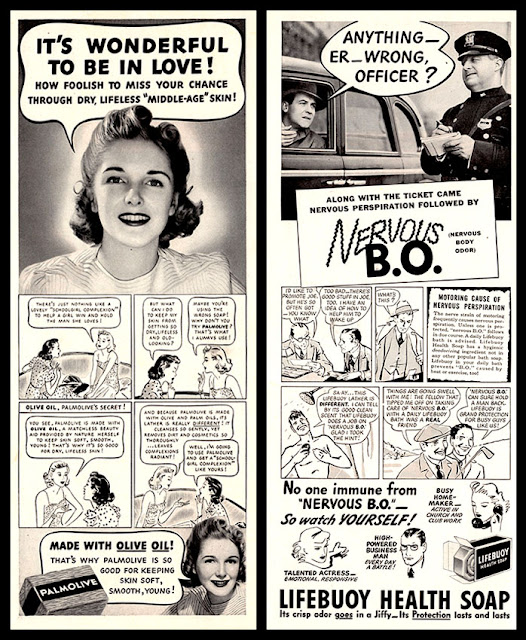 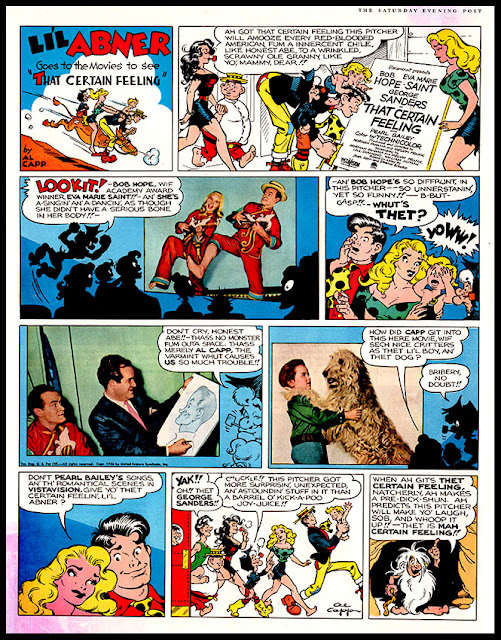 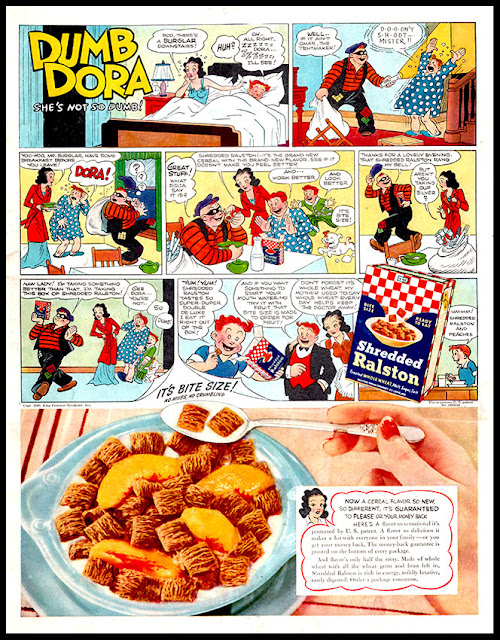 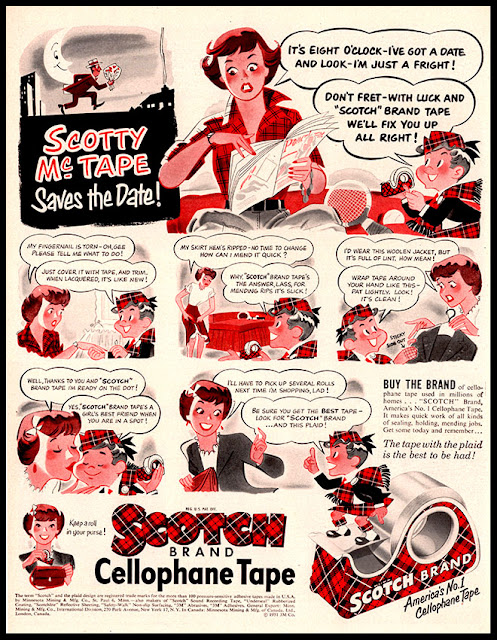 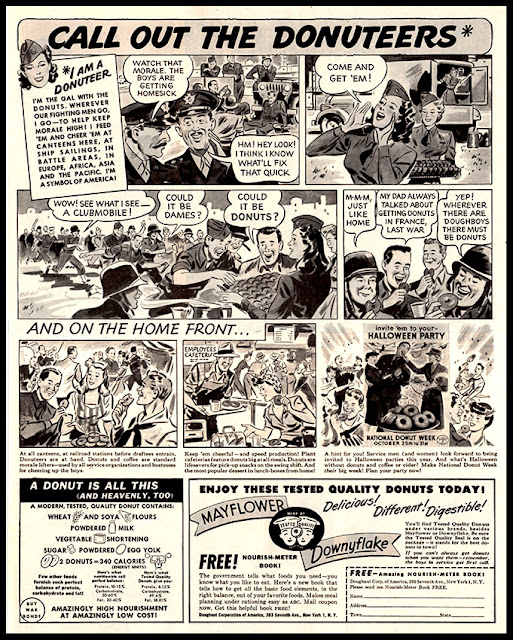