Postcard of the Day No. 57, Grimsby 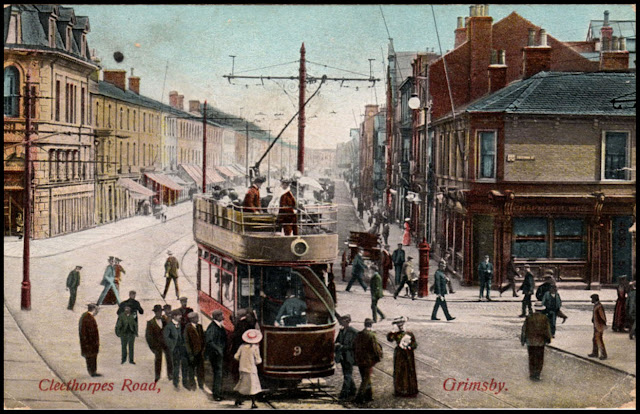 The town of Grimsby shares the misfortune of Hartlepool, Worksop, Barrow, Smethwick, Middlesbrough, Bootle, Workington, Bridgwater, Merthyr Tydfil, of being lazily stereotyped as a town entirely lacking in merit – an antithesis of Winchester, Cheltenham, Bath, Salisbury, Harrogate, Beverley, Ludlow or Hexham. In every region there’s a tendency for local opinion to agree on one particular town to which everyone residing elsewhere can feel superior. I am instinctively drawn to this sort of town in the certainty that it will possess unsuspected and unappreciated qualities and delights – no place is boring, as Jonathan Meades has written. Back to Grimsby where today’s postcard shows the populace in their finery clambering aboard a tram bound for the seaside at Cleethorpes – there’s an air of Sunday-best about this crowd and a determination to make the most of their brief and hard-won hours of weekend leisure. The second card is a multi-view of Grimsby’s attractions including the famous Dock Tower, Fish Docks and Blunden Park where Grimsby Town, currently languishing in the Conference, once played First Division football. Indeed at the time of this card the Mariners were embarked upon the first of several precipitous falls from the top division to non-league obscurity. In the final card we see a glimpse of the pleasures our tram passengers can look forward to on their arrival in Cleethorpes. 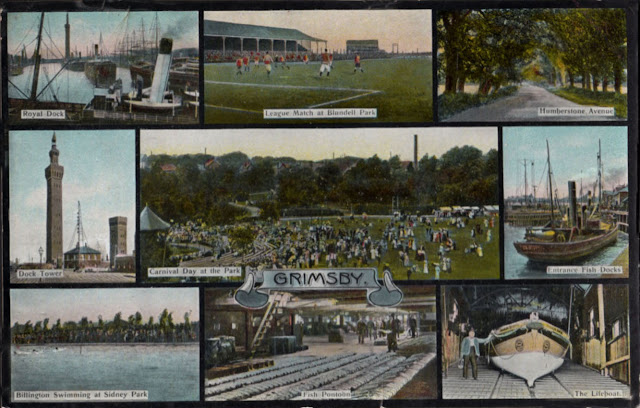 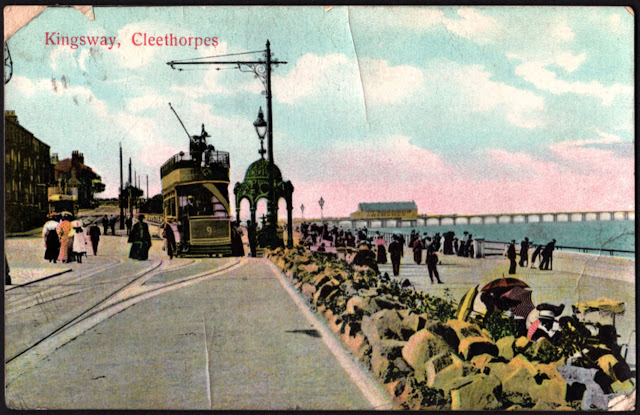 Posted by Phil Beard at Wednesday, September 19, 2012 No comments: 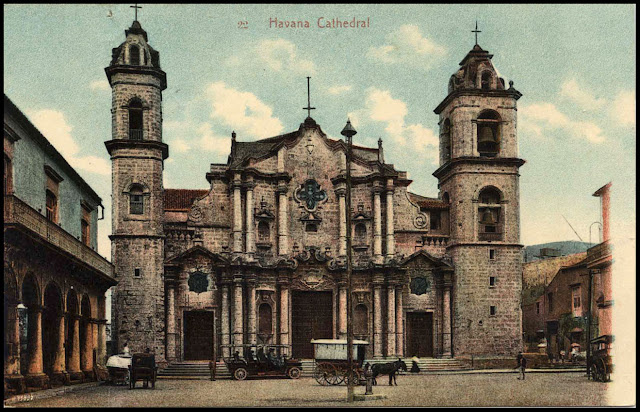 These attractively de-saturated colour postcards come from the first decade of the newly independent Republic of Cuba beginning in 1902. Turbulent times including a disputed election, an armed insurrection and a two year occupation courtesy of the US armed forces. None of this drama disturbs the surface of these untroubled soporific images of thinly populated streets where very little stirs. Postcard photographers were notorious early-risers, anxious to avoid the rush hour crowds whose blurry images could compromise the integrity of their otherwise perfect compositions. An empty city was highly desirable – a rival attraction, a bullfight, a Papal mass or a boxing tournament was just the thing to draw the crowds away. The colonial architecture inherited from the Spanish retains a crisp and well maintained air that would gradually decay as the political fabric was torn apart in a succession of ideological conflicts over the next half century. 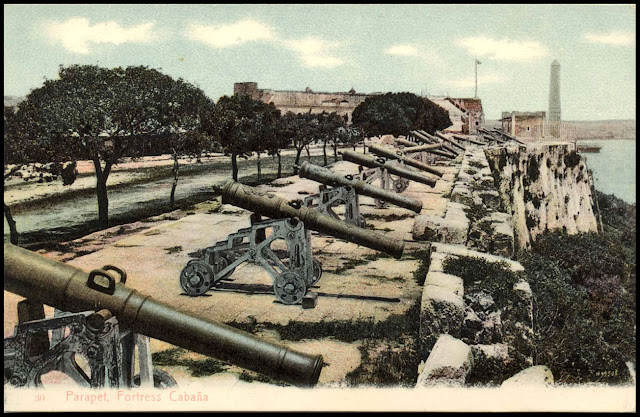 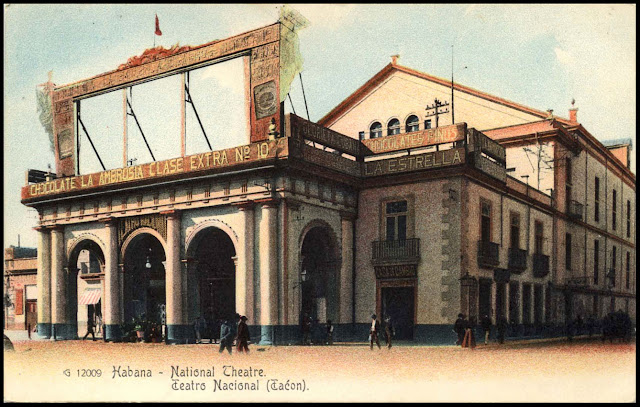 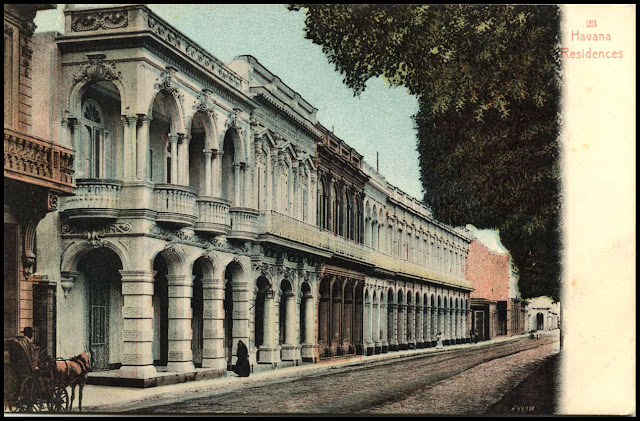 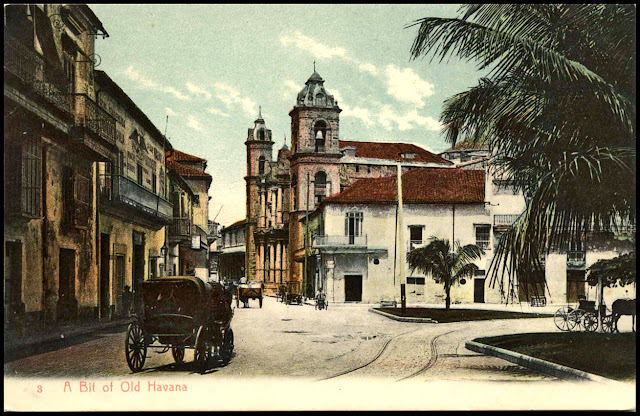 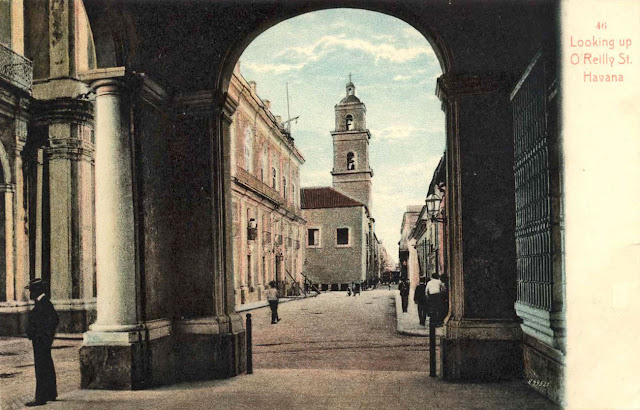 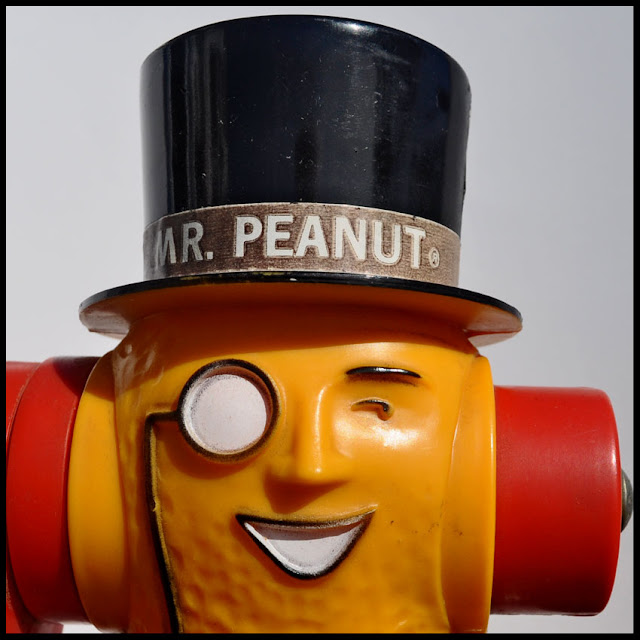 Today’s visual aid comes from the Cabinet of Commercial Curiosities. Regular readers may recall our monocled friend, Mr. Peanut, dapper brand character in the service of Planter’s portfolio of peanut products from butter to brittle. Mr. P has lent his likeness to this feeble hand-cranked device for the manufacture of home-made peanut butter. Sadly it would need to be a lot more robust to offer any chance of successfully grinding peanuts into paste. Nevertheless it played its part in the long campaign to convince the public that the consumption of ground nuts need not be the exclusive preference of the nation’s pigs. The double page ad from Saturday Evening Post (May 1956) celebrates the Golden Jubilee of Planter’s products and provides a handy history of the company’s expansion. It may have been written in 1956 but the text could easily pass for the present day language of MBA-speak or the clichéd drivel of Dragon’s Den. Anyway the time has come for Mr. P’s transition to a new life in retirement – his next appearance may well be on eBay. 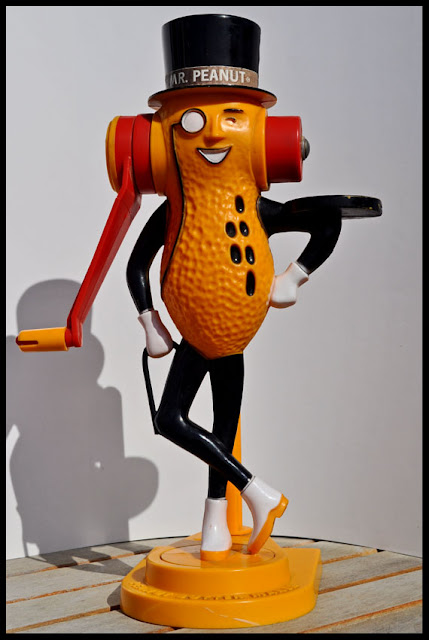 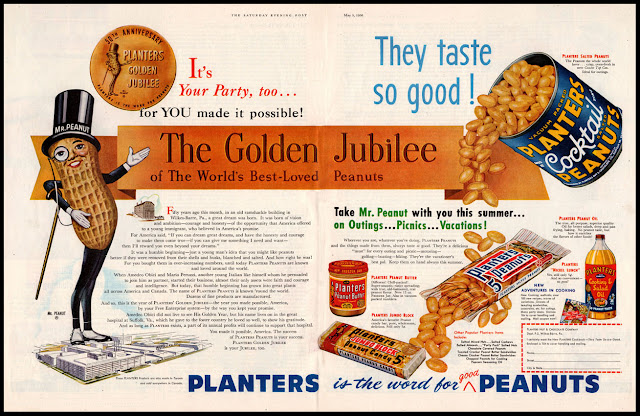 Posted by Phil Beard at Thursday, September 13, 2012 No comments: 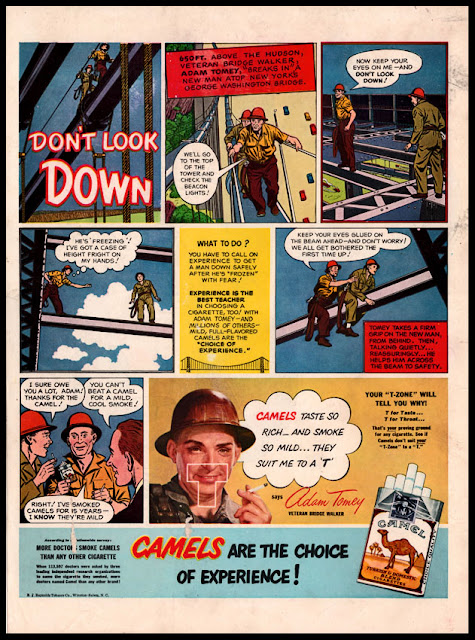 What unites this selection of mid-century strip cartoons publicising Camel cigarettes is a focus on high risk activities or occupations. Eternal vigilance and self-discipline in the face of the force of gravity is not for the faint-hearted and each character testifies to the therapeutic value of smoking. The message is that Camel is the choice of the strong and the brave and by association a little of that may rub off on us less adventurous smokers. Beneath that, yet another message is that surely we smokers can show a little courage of our own and not be intimidated by public health fanatics and their alarmist talk of heart, lung and respiratory disease. Today’s smokers are mature enough to know their own minds and handle a little risk, look death in the eye and continue undaunted to enjoy the pleasure of a fine cigarette. These were early days in the epic battle for hearts and minds between the tobacco manufacturers and the medical establishment but the time for civilised discourse had passed and matters were destined to get a lot dirtier. In a later phase, prefigured by the footnote to these ads (More Doctors Smoke Camels Than Any Other Cigarette), the manufacturers would co-opt and corrupt a small army of doctors to counteract the health warnings of their fellow professionals as we shall see in a future posting. 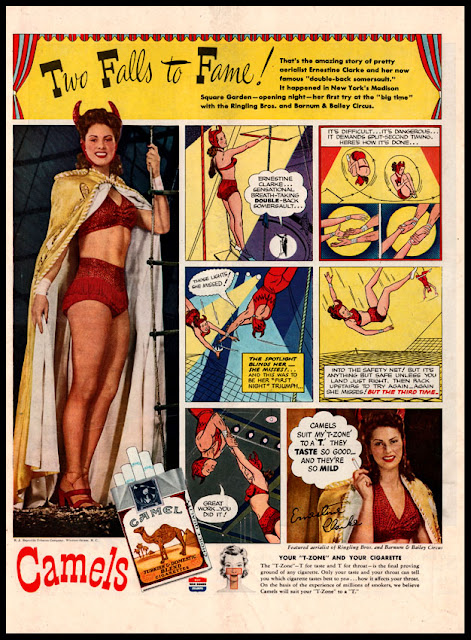 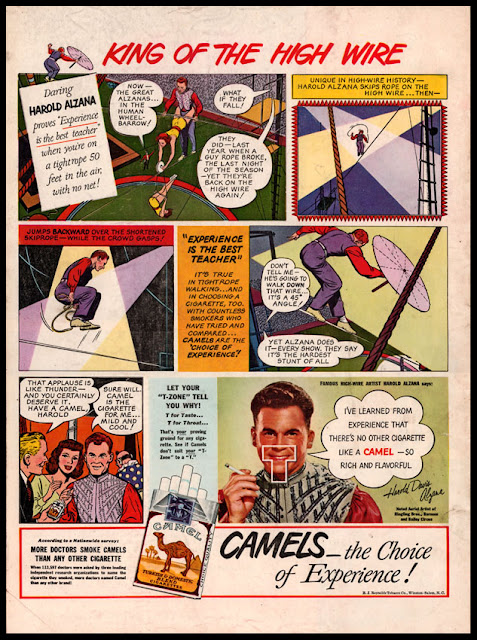 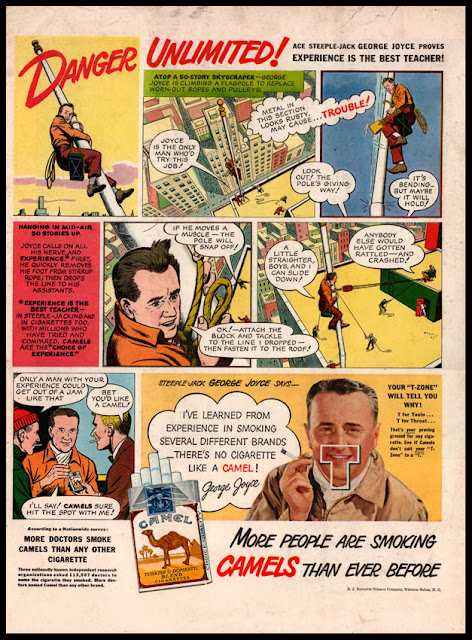 Posted by Phil Beard at Tuesday, September 11, 2012 No comments:

Under the Wires on Rubber Tyres 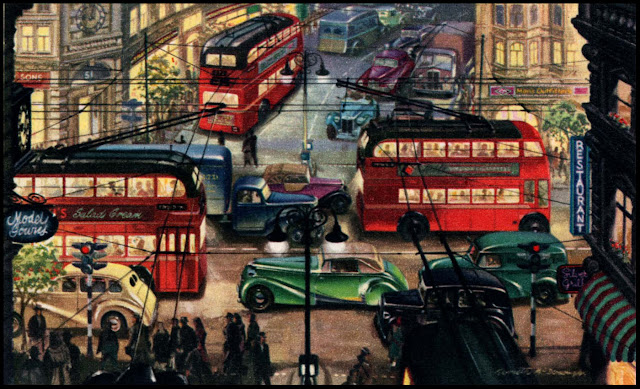 The above illustration is a persuasive transcription of the eternally grimy world I recall from early childhood – city centres where the streetlights often gleamed all day in a vain battle with dense industrial fog. The most radiant colours to be seen were those applied to commercial vehicles or generated by neon signage. The silent presence of the trolleybus was typical and idiosyncratic municipal paint schemes brought welcome splashes of colour to relieve the urban gloom. Trips to South Shields were graced by Cornishware blue and cream while in Newcastle the streets were illuminated by an arresting egg-yolk yellow and cream. A later recollection is of cycling down the Edgware Road at the age of 13 alongside the last of London’s impressively large Corporate Red trolleybuses. All this reminiscence is the result of a recent visit to Germany where the trolleybus is alive and well some four decades since its eradication from British streets. Together with steam locomotives and trams, the trolleybus was a victim of the wave of unusual enthusiasm for progress and modernisation that gripped the British political class in the 1960s. In Look at Life short films from the late 1950s and 1960s, the commentator’s plummy tones are often heard deploring the sad fact that Britain is a long way behind “our friends on the Continent” in terms of motorway construction, bridge building, ship building, cargo handling facilities in ports and railway modernisation – all signifying a growing awareness that the quality of British infrastructure was massively inferior to that of its European competitors. 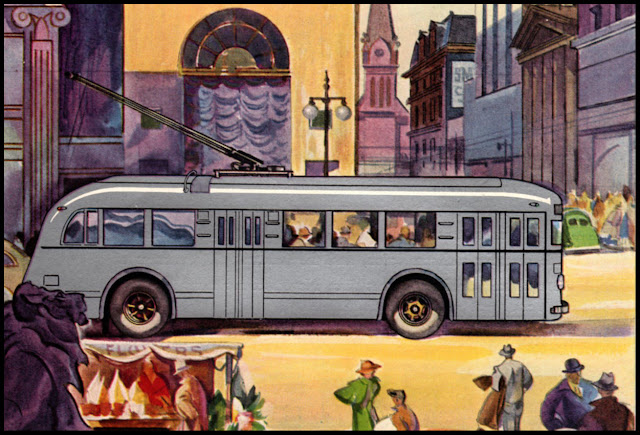 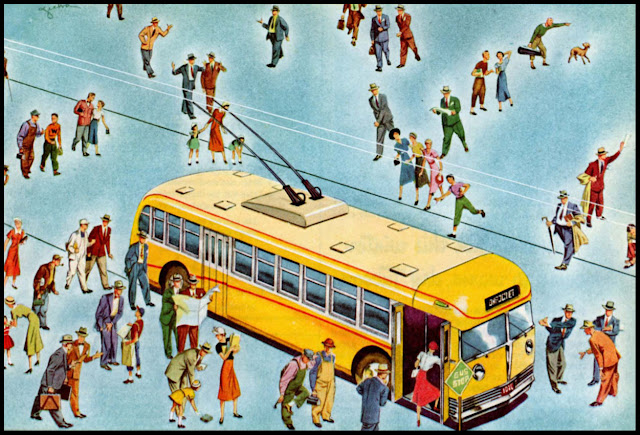 History records that the post-war UK economy went into a trance for a decade or so, protected from harsh economic realities by catering to captive markets in Commonwealth countries while chronically under-investing in innovation and productivity. During the 1960s policymakers responded with bright shiny visions of modernisation but clumsy application ensured that the country experienced all the disadvantages of half-baked planning and rushed implementation, especially in housing and transport. Enormous sums of money were wasted on untested schemes for the nationalised railway as the network switched from steam to diesel and electric power with all traces of old-fashioned steam eliminated by 1968. Pride in being the first European system to achieve this was short lived as it rapidly emerged that much of the new motive power was seriously flawed and large numbers of almost-new diesel locomotives had to be scrapped due to serious design failings, problems with reliability and maintenance issues. Meanwhile European railways were engaged in a measured and phased transition from steam power – on a visit to Germany in 1974 I travelled on several steam-hauled passenger trains – taking time to evaluate and optimise the performance of new technologies. 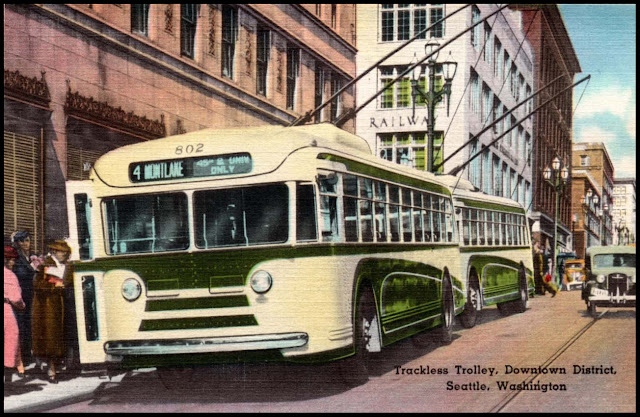 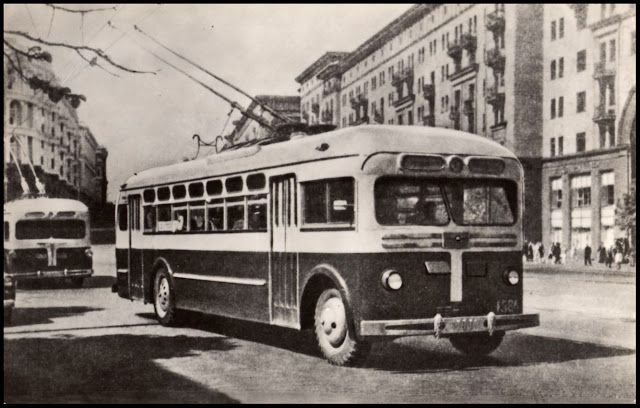 At the start of the 1960s there were 26 trolleybus operators in the UK but despite almost silent running on rubber tyres and zero emissions they were deemed to be obsolete and anachronistic. In the rush to modernise, these systems rapidly closed down until in 1972 the very last trolleybus was retired from the streets of Bradford, leaving the diesel-engined bus in a monopoly position. Elsewhere the trolleybus has survived into the present – in some instances because a lack of public investment inhibited the development of anything better (former Iron Curtain countries) but more often because appreciation of the environmental benefits persuaded transport planners to upgrade and expand their existing systems. Trolleybuses have been successfully integrated into rapid transit systems in many major cities around the world including Athens, Vancouver, Seattle, Lyon and Zurich. By 2018 the citizens of Leeds should be travelling through the city on their own brand-new trolleybus network, thus resurrecting a tradition that died 46 years ago in nearby Bradford.

The photographic images below come from Solingen and Wuppertal, the postcards are from Moscow and Seattle – the rest are illustrations for advertising. 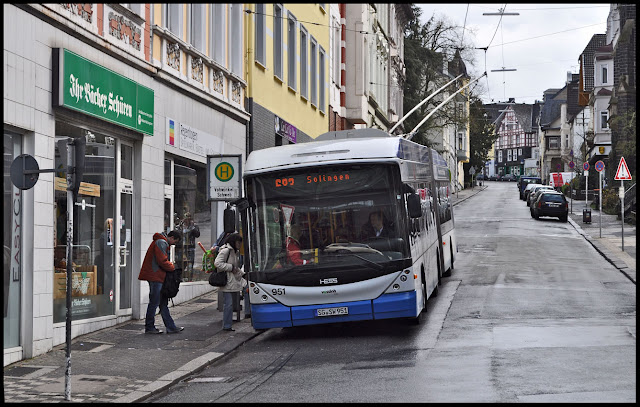 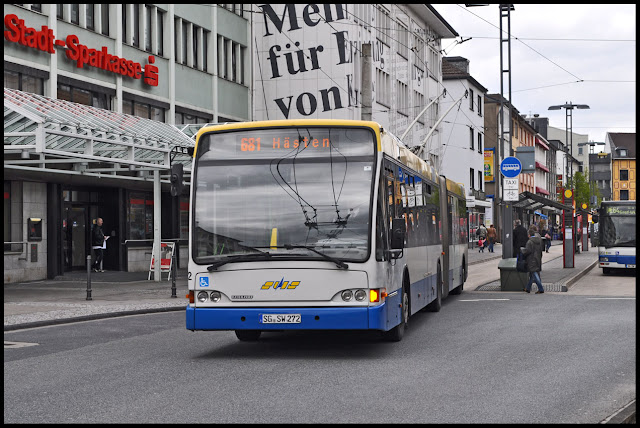 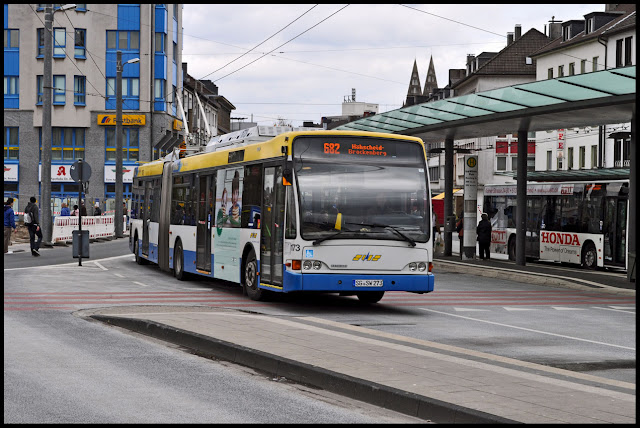 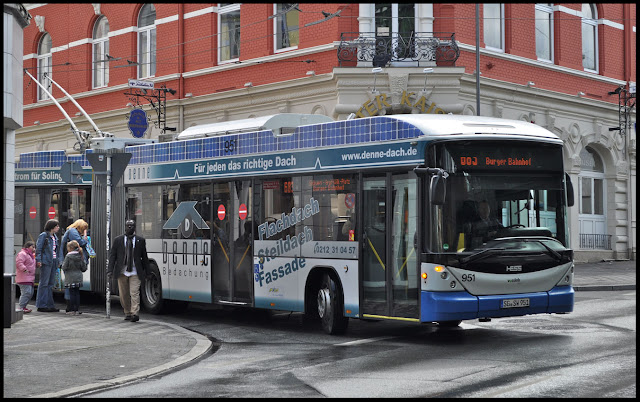