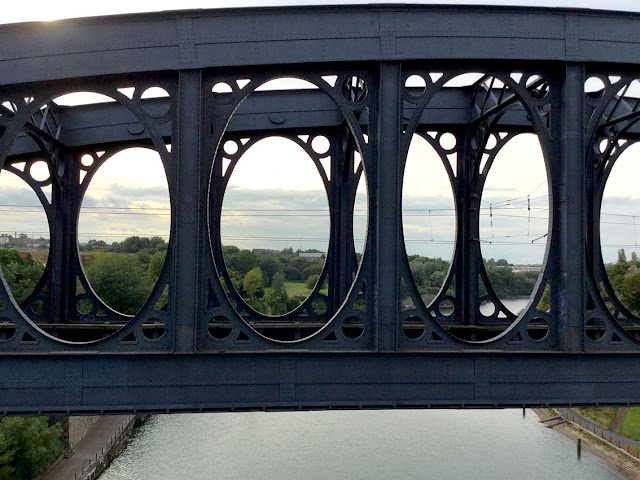 I normally avoid writing in the first person in this space. Politics rarely intrudes – I have no interest in offending readers. But when we are overwhelmed by a political catastrophe, it’s time to make an exception. I was born in the North East of England, 3 months after the war ended – a middle-class child and grammar school boy. Something about the region got into my bloodstream and the North East (rather than England) always felt like my spiritual home even though I was relocated to Metro-Land with my family from the age of 13. There’s a place in my heart for Metro-Land (an amorphous entity of surpassing strangeness when closely examined) but the North East (especially Sunderland and Hartlepool) has by far the greater claim on my affections. Perhaps the determining factor was a boyhood fascination with the hard-core industrial character of the place – a thrilling spectacle to an impressionable child of blast furnaces, coalmines, petrochemicals and shipyards. 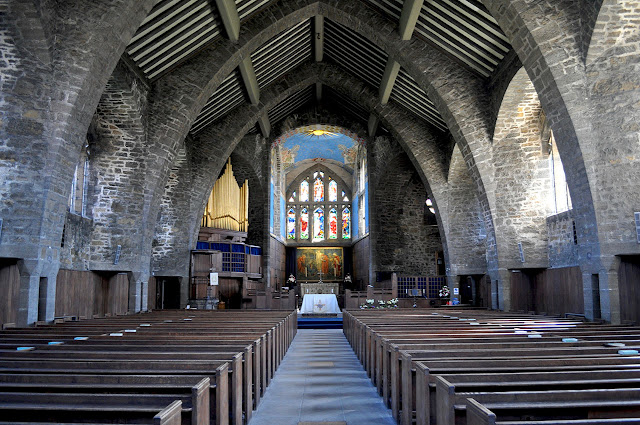 Outside the urban areas was a pleasing variety of countryside to enjoy – majestic Pennine uplands to surprisingly verdant valleys. Plus the City of Durham – a special place with one of the most spectacular cathedrals in all Europe. Locals were neighbourly and affable in a North Country way and humour (often sharp and quick) was never far from the surface. Many had Scottish or Irish ancestry whose forebears had moved there in search of employment. From a North East perspective almost all of England lay in the South, a city like Sheffield might as well have been a land of palm trees and cocoanut groves. When I got to Metro-Land I learned that Sheffield was a dark and distant industrial dystopia. 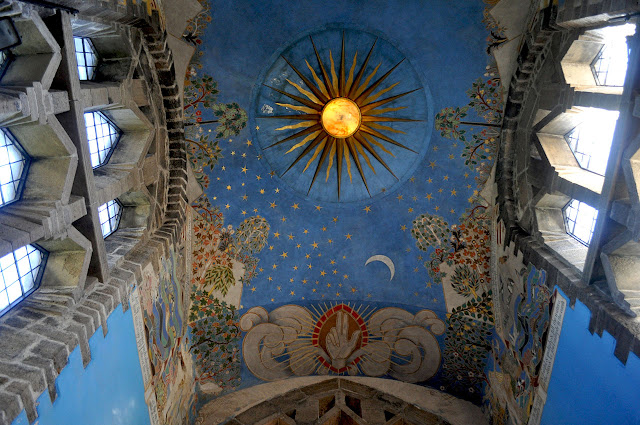 It wasn’t a great surprise, but no less shocking for that, to discover on Friday morning that the voters of Sunderland and Hartlepool had voted in greater numbers for Brexit than almost anywhere else in England. A great white working-class electorate sent up a howl of protest against the ruinous effects of half a century of de-industrialisation where the dignity of labour for a majority has evaporated. The solidarity of the workplace has vanished in an atomised, insecure low-wage job market and social provision has been systematically and ruthlessly decimated in an ideological crusade to maintain a low-tax regime for the wealthy and tyrannise the unemployed into a world of zero-hours and short term contracts. Lifelong Labour voters finally responded to the question, “What’s Labour ever done for us?” by deserting the party in tens of thousands. 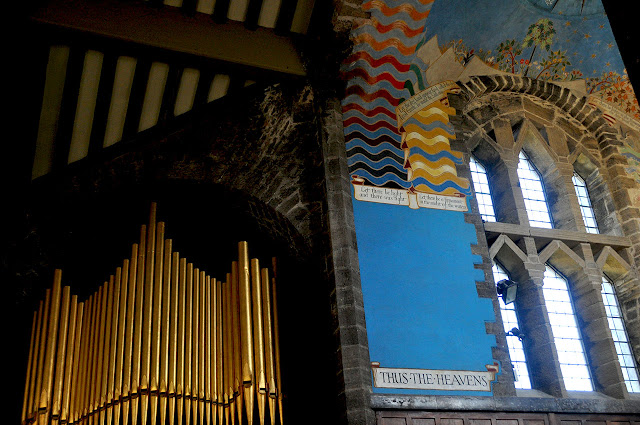 Just how did the last residual loyalty to the Labour tribe finally fray away? Perhaps the beginning of the end was Peter Mandelson’s term as MP for Hartlepool (“intensely relaxed about people getting filthy rich”) during which New Labour did very little to tackle the desperation and deprivation of the nation’s former industrial heartlands. Was it accelerated by the coalition’s austerity-driven assault on social and welfare provision? Almost certainly. Did a 20 year tabloid (and broadsheet) campaign against the mostly fictional deficiencies of the EU play a part? Definitely. And did the utterly unscrupulous and venomous 12 year blitz of xenophobic propaganda by the same newspapers have an effect? Absolutely – otherwise how can the hostility to immigrants in a region that is one of the last destinations for migrants in search of employment be explained? This is a population, cynically groomed by masters of misinformation, opinion formers who would have served the Third Reich with distinction, given the opportunity. Easily persuaded to place the blame for all their discontents on outsiders and remote Brussels bureaucrats. 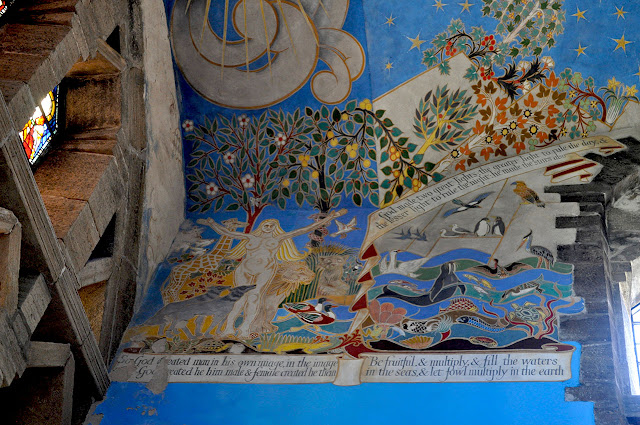 This is all deeply depressing but what is even more astounding is that these voters have placed their trust in Johnson and Gove, a Gilbert and George tribute act in which two slightly weird looking performers attempt to outdo one another with the scale and audacity of their lies. The fight-back against an oppressive establishment elite is to be lead by a pair of former journalists whose careers were built on their ability to distort the truth to fit the prejudices of their masters and readers. Their elitist credentials are impeccable – private income, public school, Oxford. Despite that they are essentially puppets of megalomaniac media proprietors. In the case of Johnson, the strings are pulled by the weirdo Barclay Brothers whose Daily Telegraph pages are besmirched by regular windy diatribes from the pen of Johnson – for which dubious services they pay him £250K per year. The Gove strings are pulled by Rupert Murdoch (CEO, News Corporation) by whom he was employed as a Times columnist for almost a decade. Gove is a regular around Murdoch’s dinner table – who knows what they talk about but I can say with total confidence that addressing social and income inequality has never been a topic for discussion. Johnson and Gove are two of the loudest cheerleaders for the callous neoliberalism that drove their new-found followers to despair.

What next? Can the Labour party find the language to reconnect with its lost voters? Unlikely at present. Is there a Labour leader in waiting with the skills and personality to make a difference? Maybe – but I couldn’t name one. Can Johnson and Gove deliver the White Supremacist State that the worst of their followers believe they have been promised? If they lack the stomach for a programme of repatriation there are others with no such scruples. The recent ugly scenes in Newcastle may be just the start of something very much worse. Johnson and Gove are postmodern politicians – clever and shallow, puny in stature, devoid of conscience, no grace or gravitas. Will they persuade the Scots to remain in the Union? Do they command the necessary public trust to deal with the unravelling of the Good Friday Agreement? Watch them choke as they attempt the simultaneous ownership and consumption of cake. Their false promises and falsehoods exposed will be their undoing. And they will turn to us, hold out their hands and say – it was only ever a piece of performance art. Get over it.

Postcard of the Day No. 83 – Hôtel Normandie 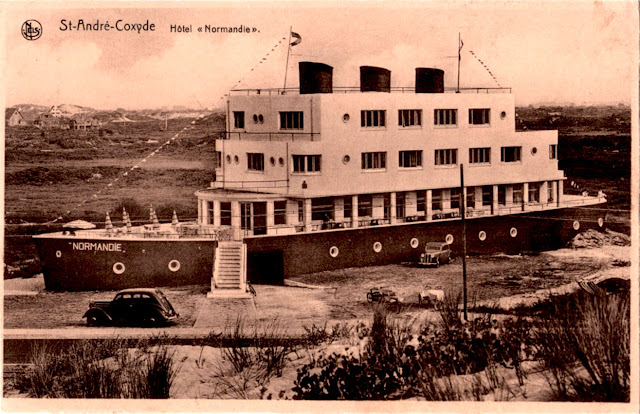 The Thirties fashion for maritime themed architecture reached a kind of end point with this example from the Belgian coast at Oostduinkerke near De Panne, built in 1933 as a restaurant. Rather than borrow the sweeping curves and raking profiles associated with marine architecture this developer settled for a coarse and ill-proportioned parody of an ocean liner complete with replica funnels. There’s a long and honourable tradition of this attention seeking, novelty design in the United States where B 52s or diplodocus masquerade as gas stations and drive-ins take the form of donuts and frankfurters – sometimes known as Roadside Vernacular. Without the great American wide open spaces, European planners are wary of architecture that functions as self-promotion making this a rare exception. Ever the opportunist, the restaurateur adopted the name of the French liner Normandie when it entered service in 1937. It can still be seen through the windows of the passing Kusttram between De Panne and Oostende where we photographed it on a wet day last September. 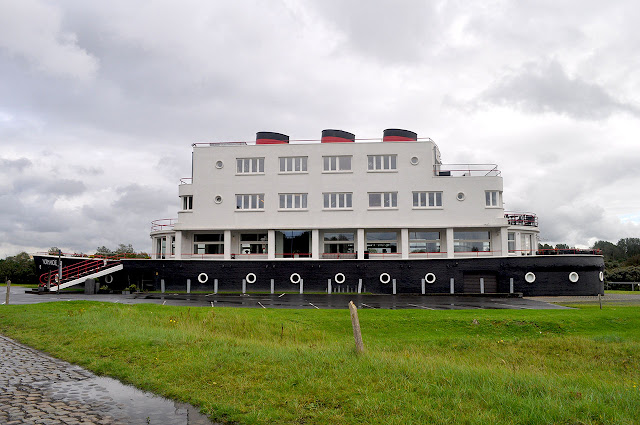 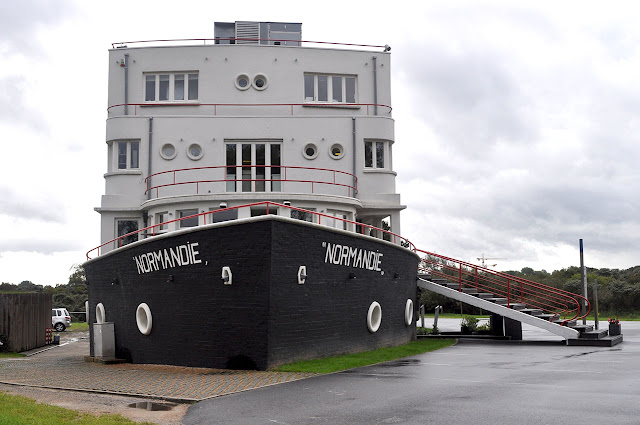 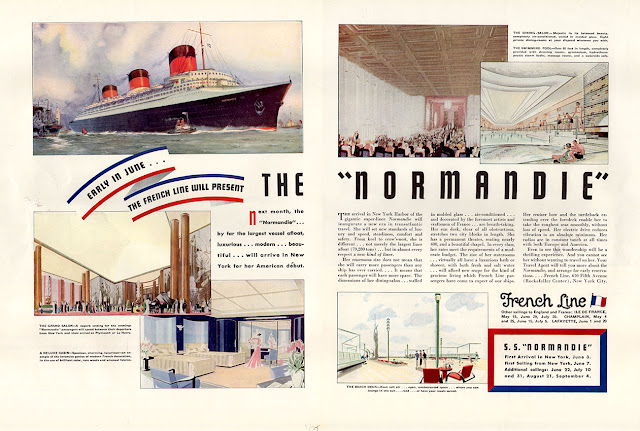