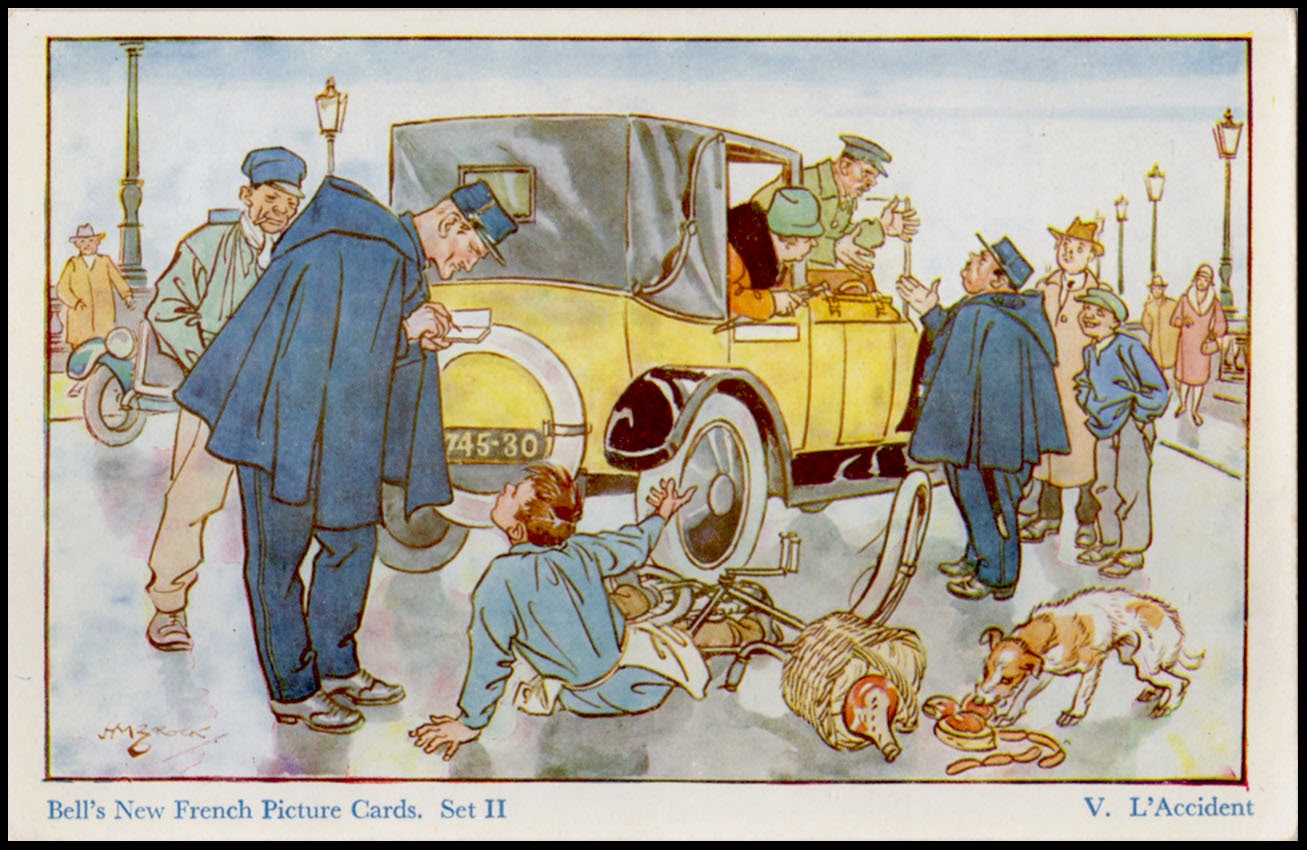 Yet another selection of didactic ephemera from the the artist and illustrator, H M Brock. The task was to produce an illustration packed with the greatest possible number of objects to feature in the printed vocabulary on the reverse. Brock was ideally suited, being a master of orchestrating busy compositions while portraying every detail with perfect clarity. The fluent and subtle drawing quality is always a delight. For more postings on Brock, please click here and here. 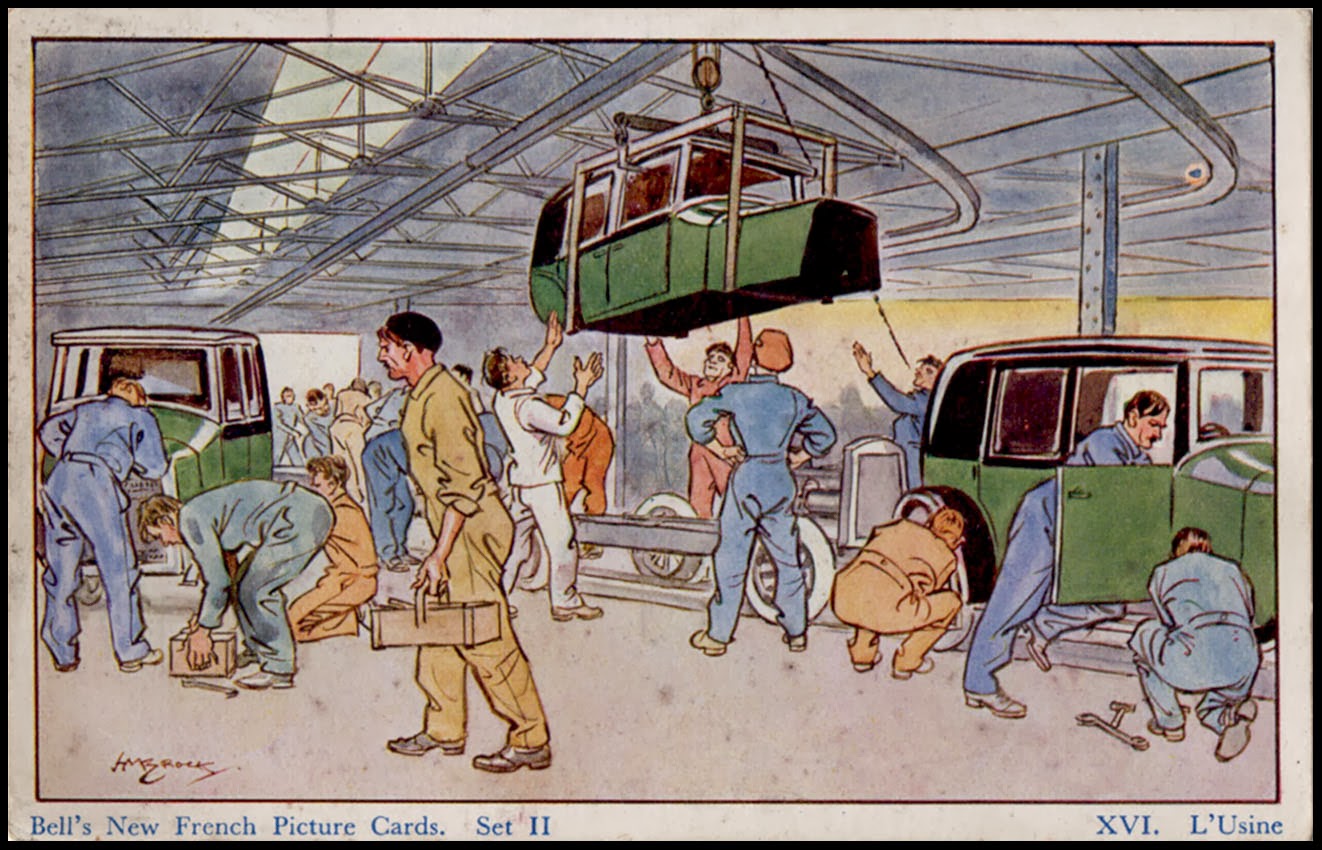 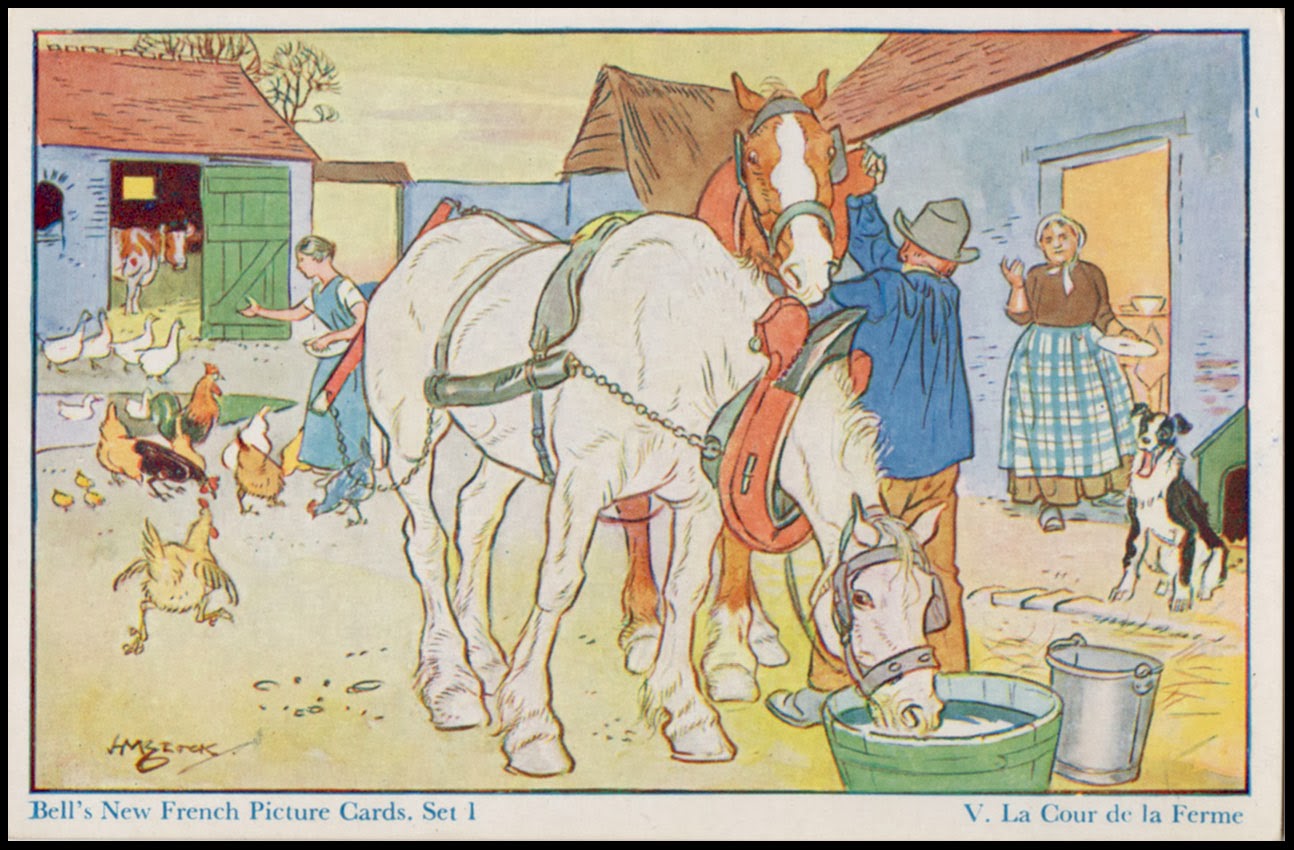 Postcard of the Day No. 64, Main Street, Pawling NY 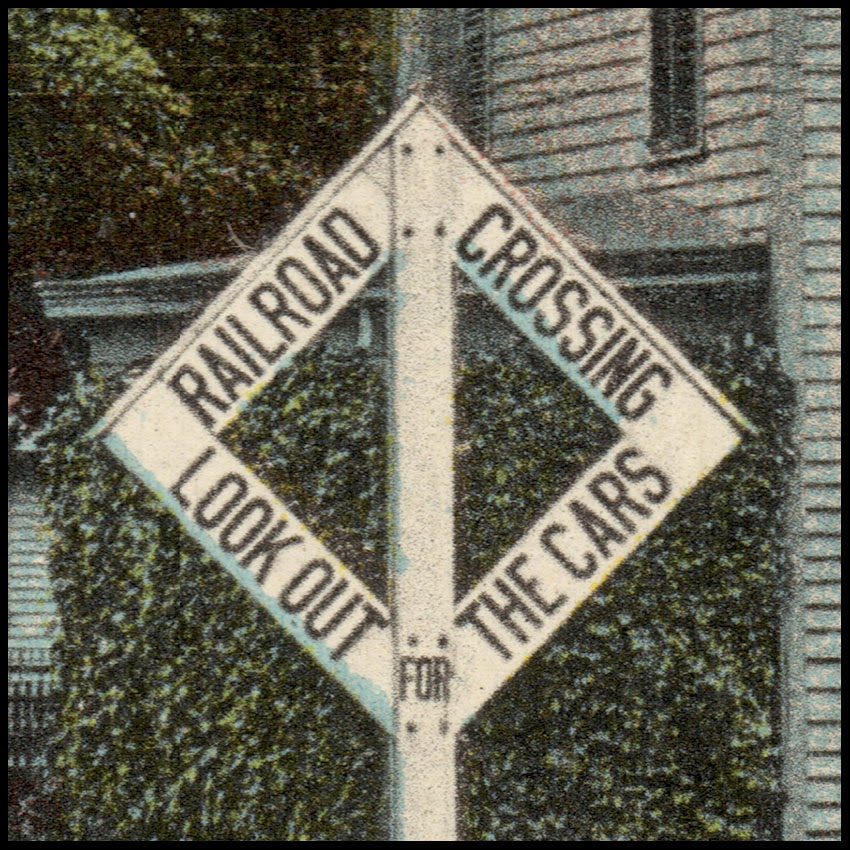 Today’s postcard is a small town scene from rural New York state. There’s a tree-lined dirt road and a railroad crossing complete with diamond-style warning sign in front of a neat clapboard house. Other dwellings can be glimpsed through the trees. The caption tells us that we are on Main Street and looking east from National Bank. The road is empty of human presence, the weather is overcast. Depending on your angle of approach it’s featureless and devoid of interest or it’s a haunting image of stillness and ominous emptiness. The railroad and the clapboard house are still there after a hundred years or so but the trees have gone. Cloning out the warning sign removes the focal point but curiously, the greater sense of emptiness does little harm to the image. 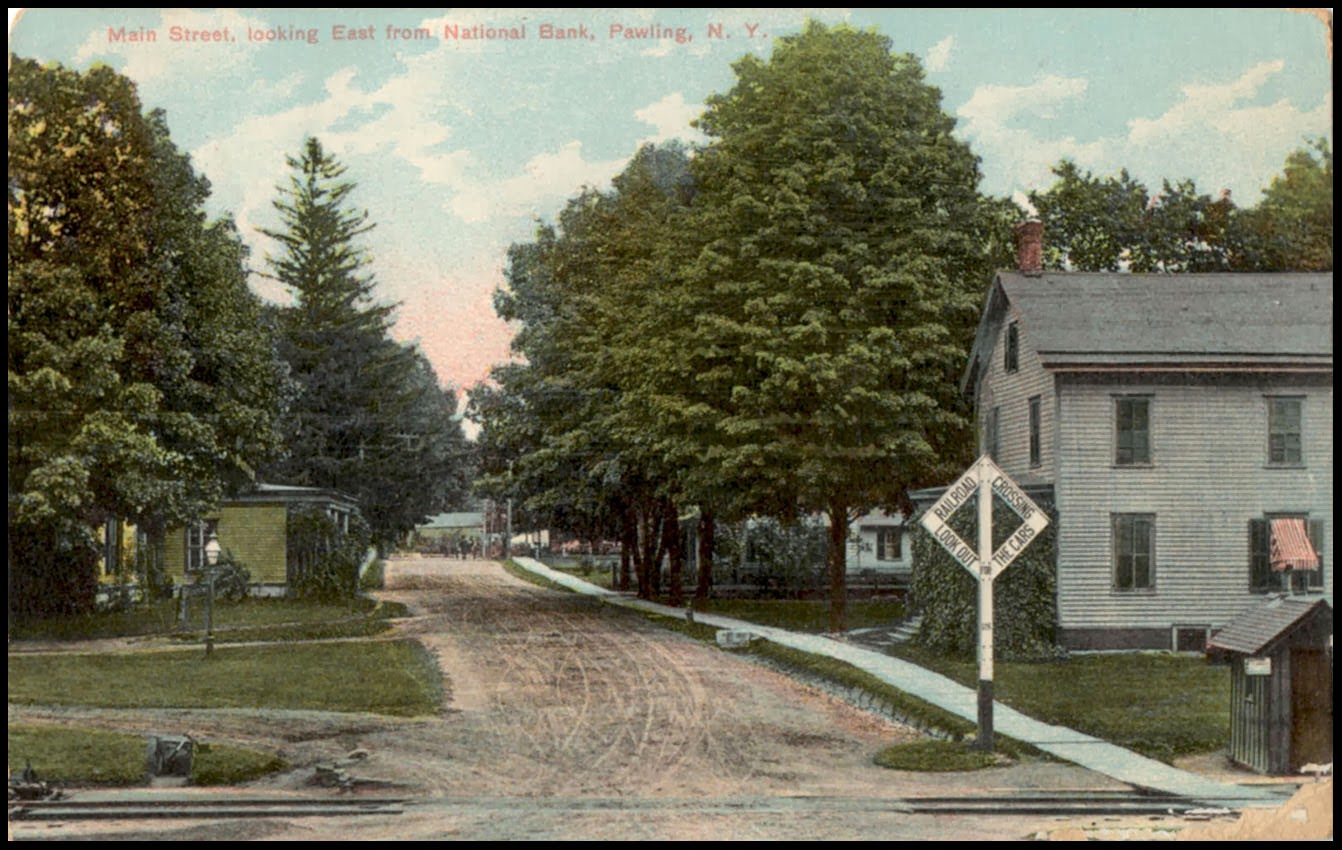 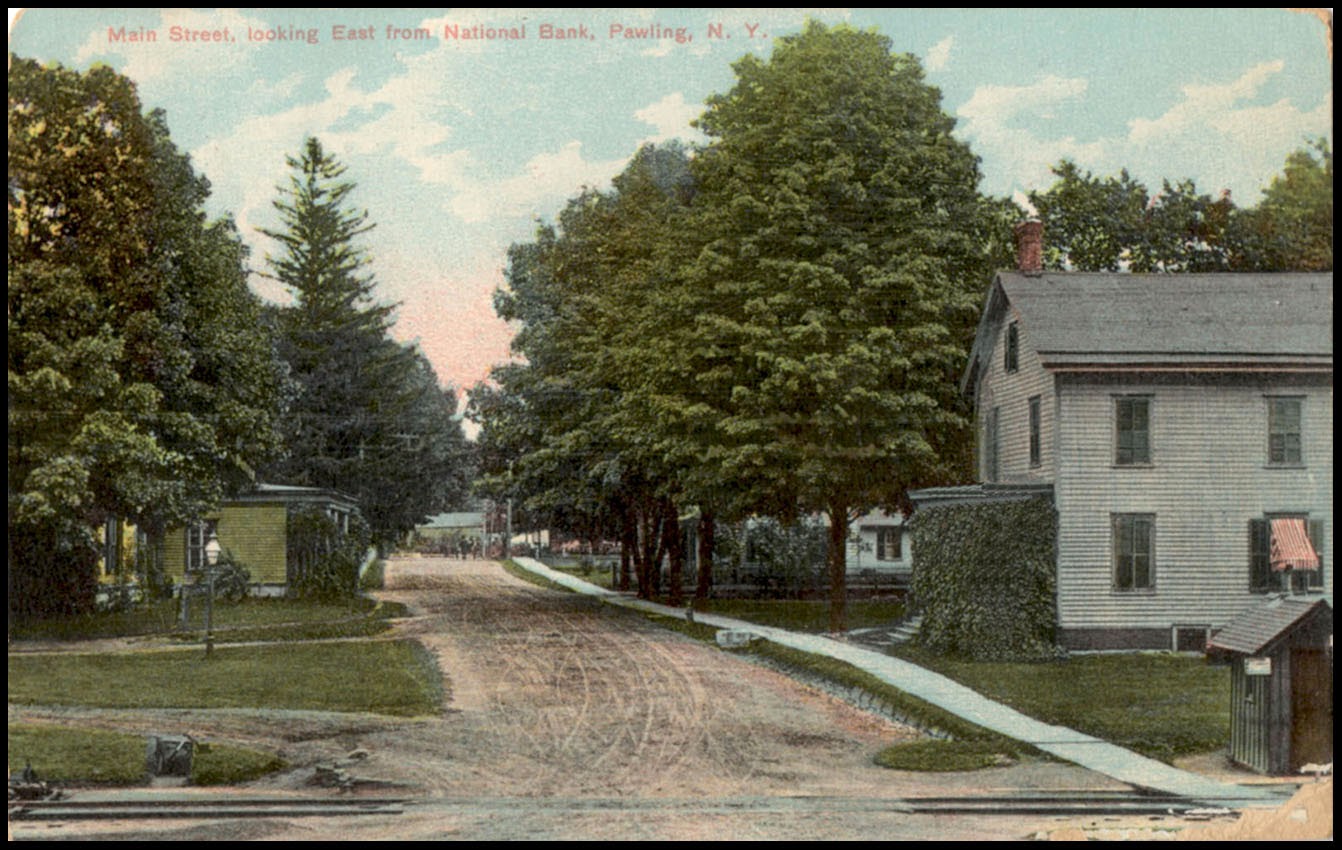 Postcard of the Day No. 63, Fleet Street 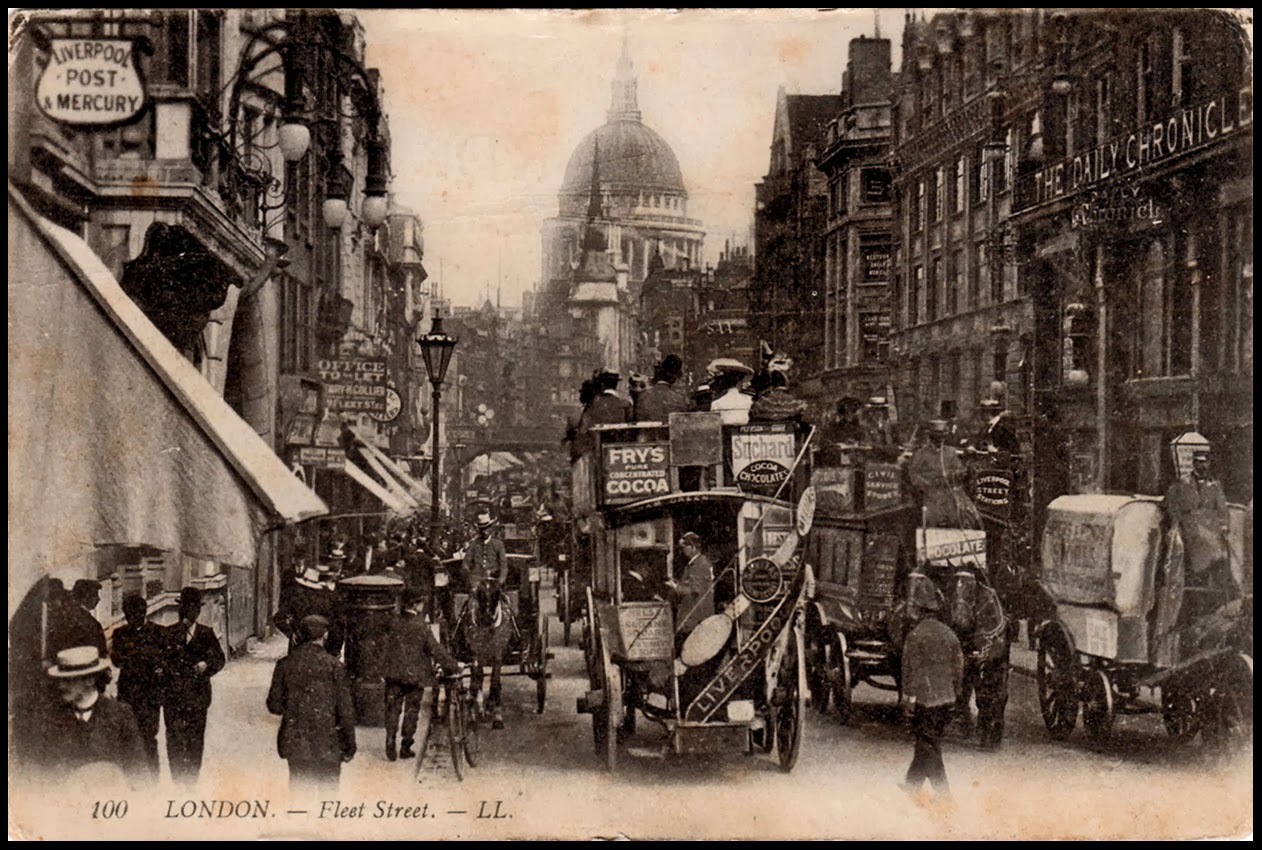 Known to readers of Private Eye as the Street of Shame, the name derives from London’s largest subterranean river. It’s a classic view looking east towards St. Paul’s and the City. The chosen cards are about 3 decades apart and as well as showing some improvement in traffic congestion they illustrate developments in printing technology and the change from monochrome to colour. The card above shows a street in the era of horse-drawn buses, throttled with traffic in an impressive amount of detail. Louis Levy (LL) of Paris was the publisher, the only producer of postcards to set up shop on this side of the Channel and noted for the excellence of their printing in terms of definition and tonal subtlety. The colour card below is the work of Valentine’s of Dundee, one of the major suppliers of postcards in the inter-war years with a large selection of colour views of Central London subjects. Printing cheaply in colour meant sacrificing the photographic clarity for which the company had been famous. The result here is an image that releases very little in the way of texture and detail while the colour palette is primitive and unconvincing. 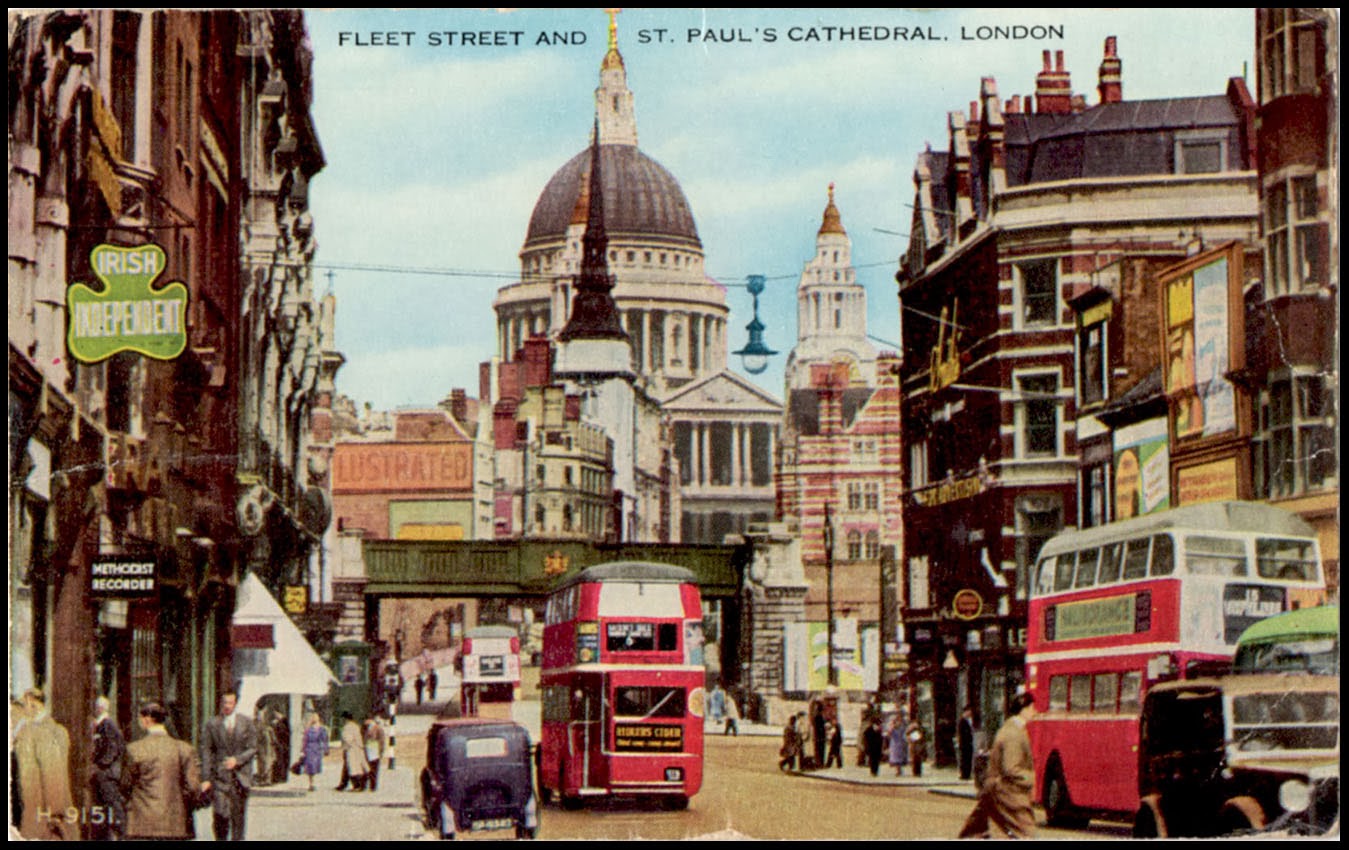 Posted by Phil Beard at Wednesday, February 12, 2014 No comments: 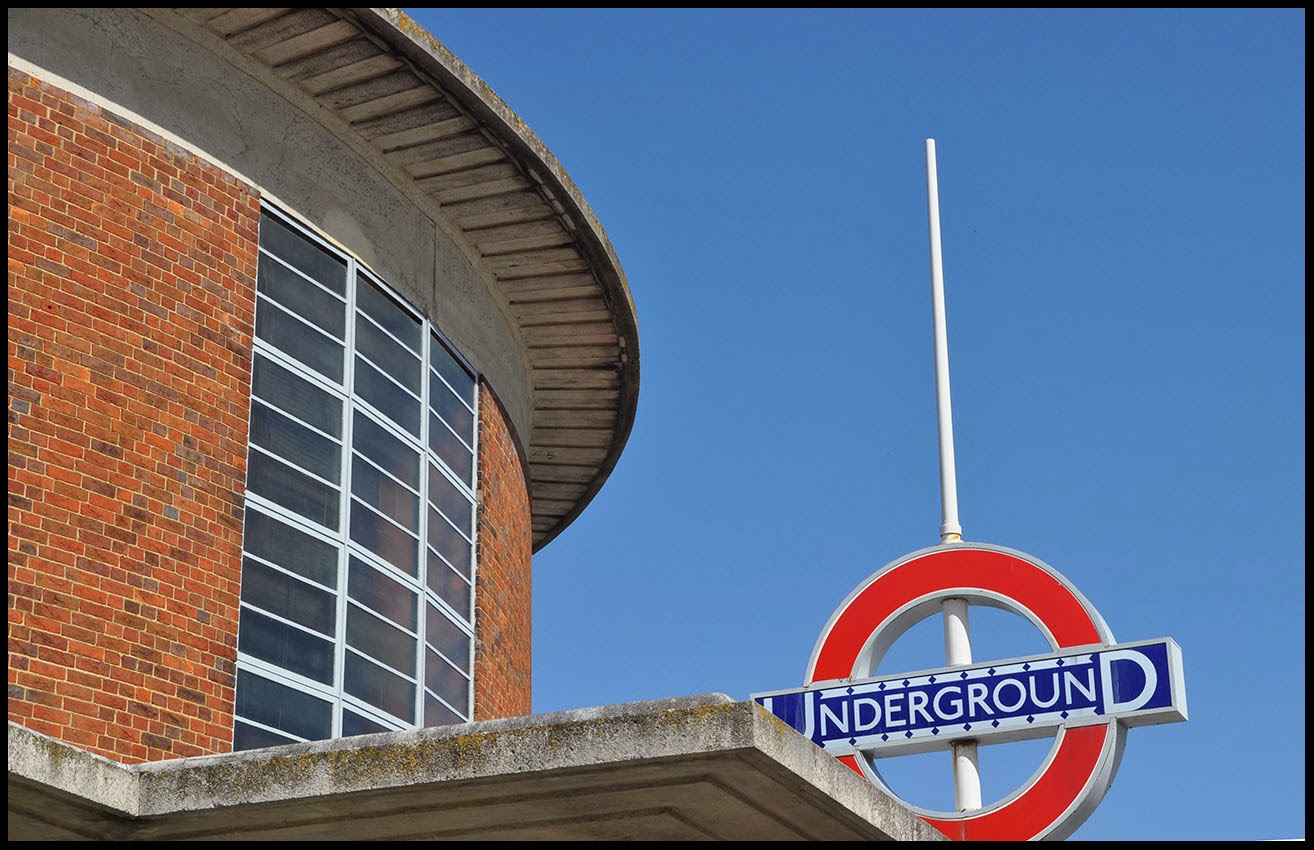 The centre of cultural life at the grammar school I was privileged to attend was located somewhere between the rugby scrum and the parade ground where members of the school Cadet Corps were prepared for the task of inheriting the earth. Cruelly, nature had ill-endowed me for chasing the oval ball and lacking the temperament for square-bashing, I gave my time to more effete pursuits including the study of architecture via the pages of Bannister-Fletcher and J M Richards. A book that I spent many hours browsing was Richards’s Pelican paperback Introduction to Modern Architecture where I learned about such wonders as the Gardner Warehouse in Glasgow and the Cité Radieuse in Marseille. I’ve written before about the strange power of this modest book to shape my preferences and another example was the inclusion of Charles Holden’s Arnos Grove tube station (above). The photograph of Arnos Grove was one I kept returning to, comparing its pristine Modernist lines with the ramshackle (Moor Park, which then still had wooden platforms) and drearily suburban cottage specimens (Chorleywood and Rickmansworth) to be seen in my corner of Metroland. But although it was only 20 miles from home there was never any compelling reason to visit that part of North London. 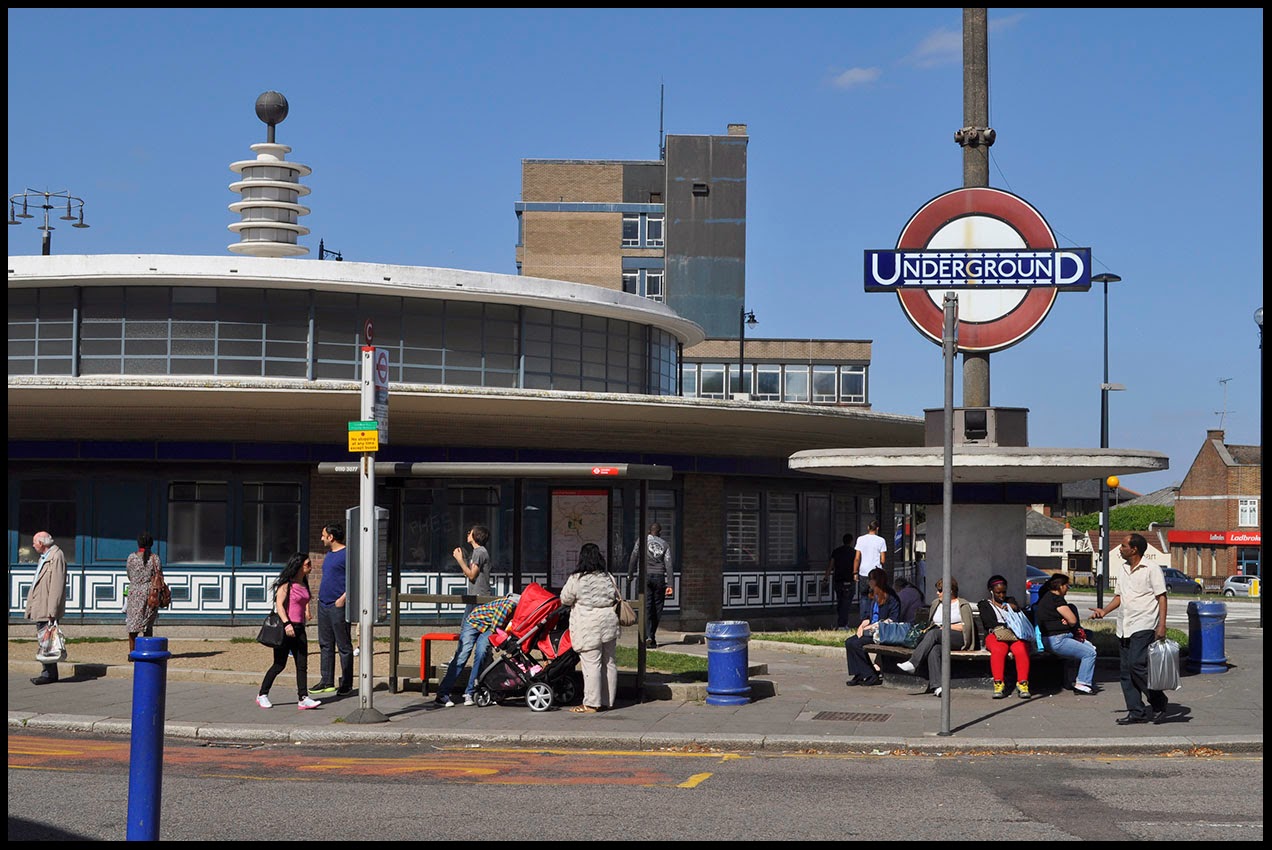 From a contemporary perspective the partnership of architect and administrator that existed between Charles Holden and Frank Pick at London Transport in the 1930s seems both miraculous and anachronistic and I finally went to see for myself the legacy of this creative collaboration. Miraculous in the excellence of design and the consistency of vision at every level. Anachronistic in the way that it was a product of a high-minded sense of public duty, simplistically caricatured as the patronising art of knowing what’s best for people and imposing it upon them without regard for their views. The difference was that Holden and Pick were designing to meet the needs of all Londoners – not just a minority of the wealthiest and most influential. 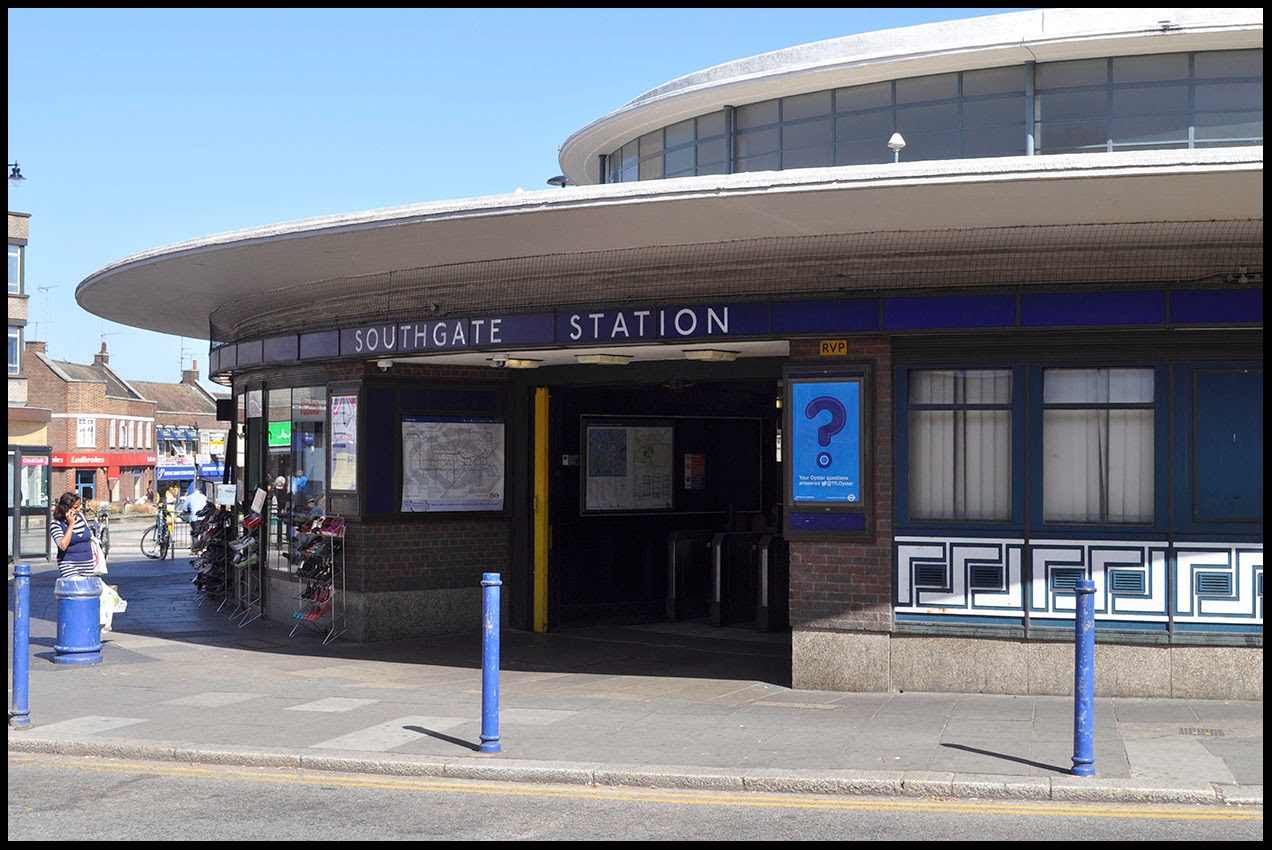 Charles Holden designed a spectacular low-rise cylindrical station building for Southgate, like a spacecraft touched down on a roundabout – an affinity enhanced after dark by the concealed lighting round the cornice and the concentric rings of a lighting beacon on the station roof that glows with the promise of the power of future technologies. Even after 80 years the conceptual clarity of design retains its excitement. The clean flowing lines have been protected by a Grade II* listing at English Heritage (that includes all surface buildings, platforms and escalators) and careful stewardship on the part of Transport for London. The street level interior is illuminated by a glazed clerestory and a central steel column supports the roof. Passengers ascend via escalators into an airy and elegantly curved interior enhanced by vertical and horizontal tiled surfaces. 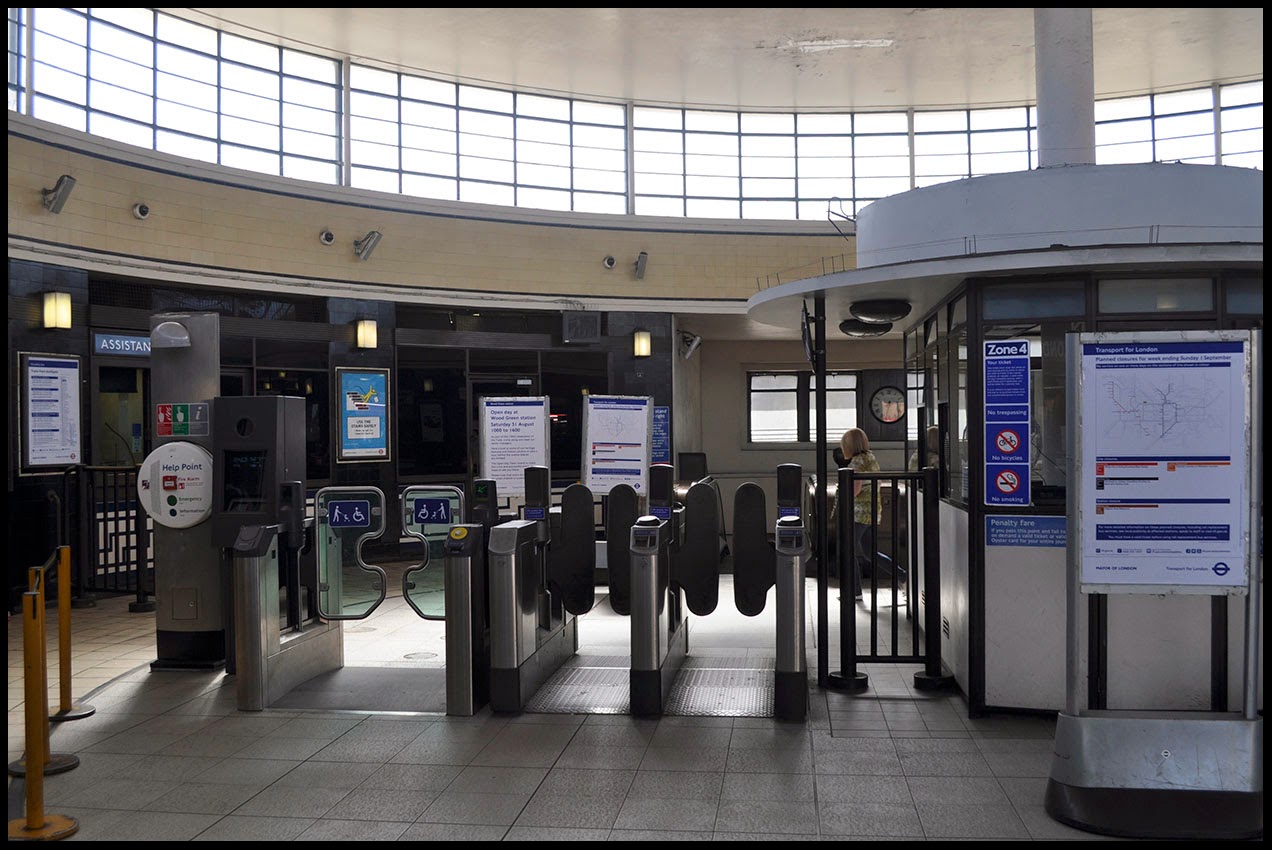 Arnos Grove is another Holden design, listed by English Heritage in 2011 at Grade II* and featuring a tall brick built drum with vertical glazing surmounting the station. Like Southgate and others, it was designed to function as a prominent landmark and succeeds triumphantly whilst maintaining a strong sense of dignity and restraint. The lofty ticket hall interior complete with fluted central column offers a generous sense of space for public circulation. Holden drew inspiration from Scandinavian architecture, adapting the style of large public buildings to the more modest proportions of local stations while resisting any compromise on quality or detail. 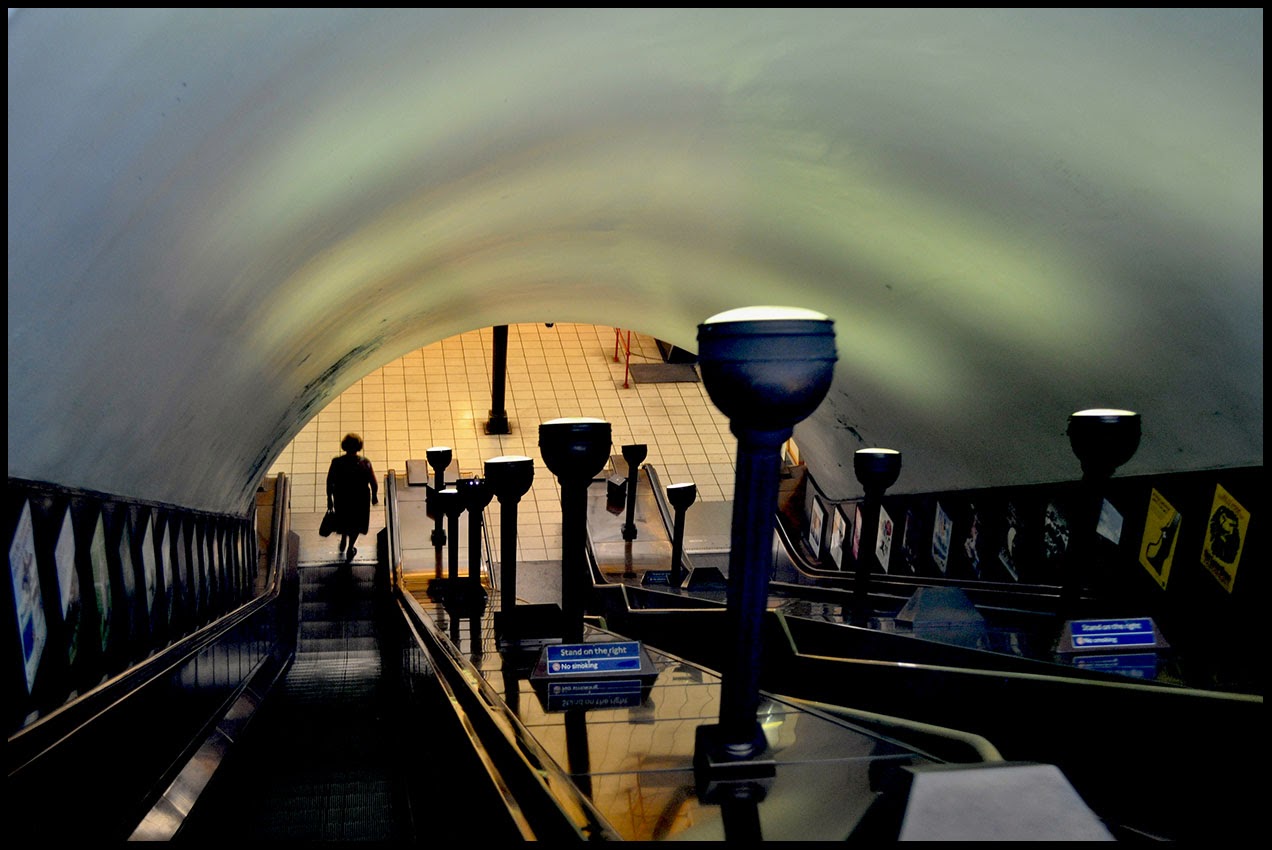 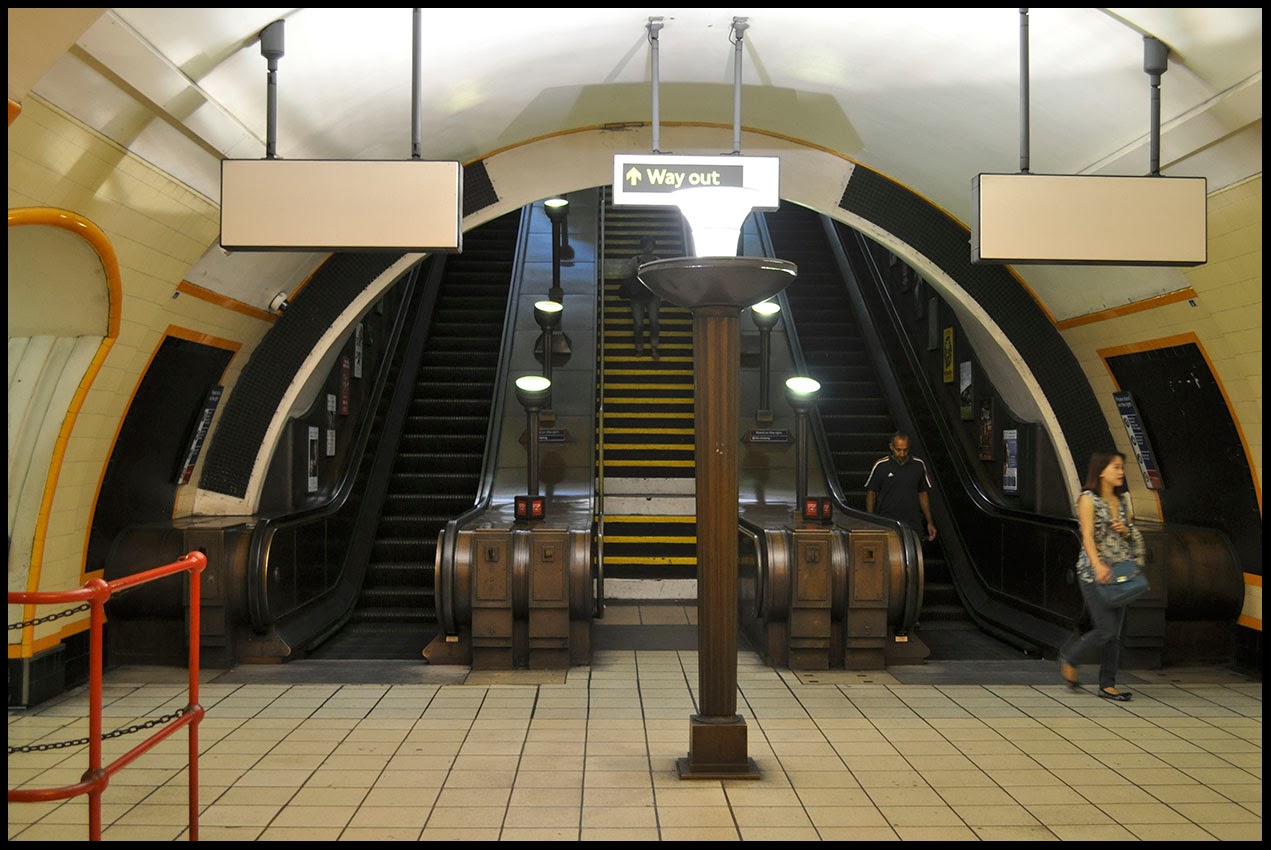 The story of Frank Pick’s all-embracing commitment to design excellence has been told elsewhere but Southgate and Arnos Grove offer a great opportunity to experience the full impact of how this worked. The northern extension to the Piccadilly Line in 1930-33 was enabled by a government loan guarantee scheme for construction projects to relieve unemployment while planners and developers built large new housing estates to expand the market for the new service. This level of co-ordination seems impossible to achieve in the age of PFI and outsourcing. While Crossrail is a stunning engineering project, there is no associated planned approach to any industrial or residential development that may follow. 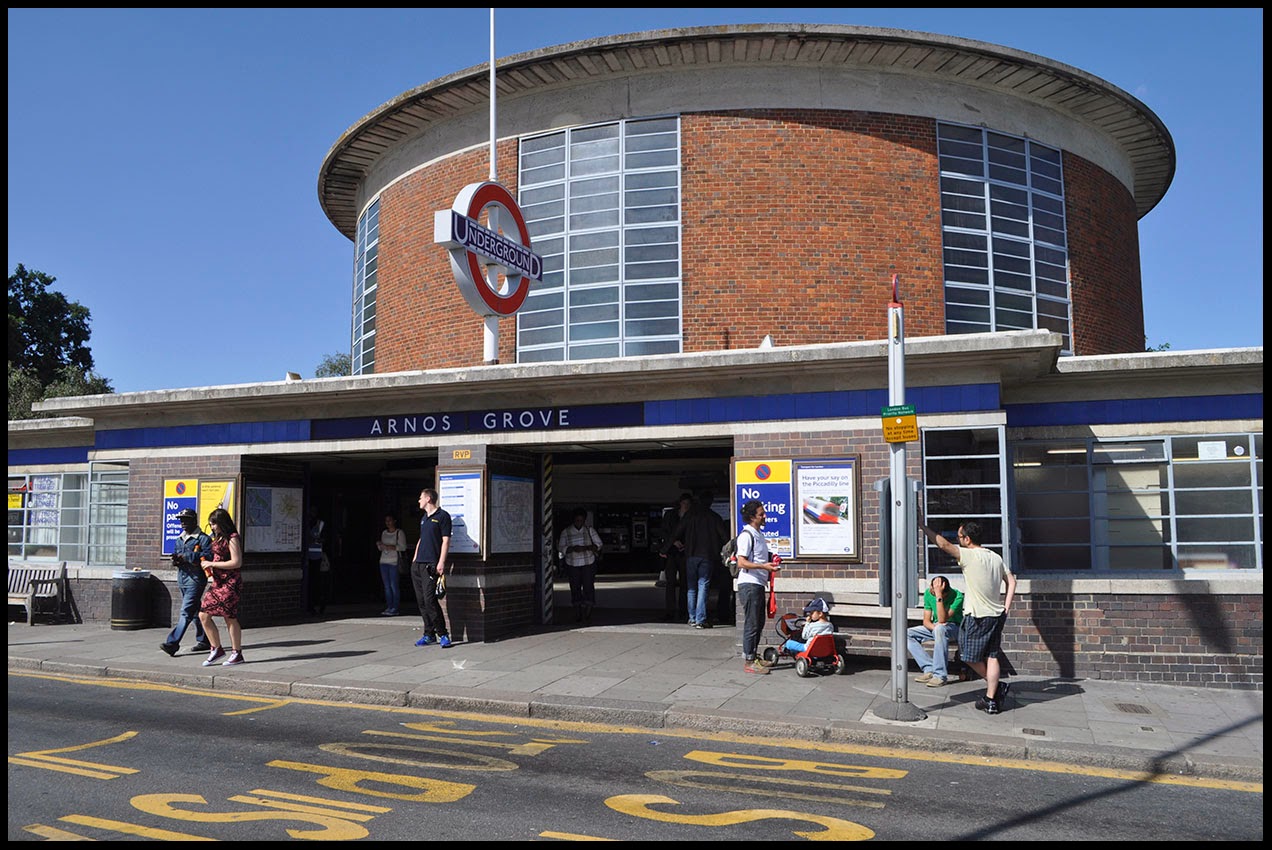 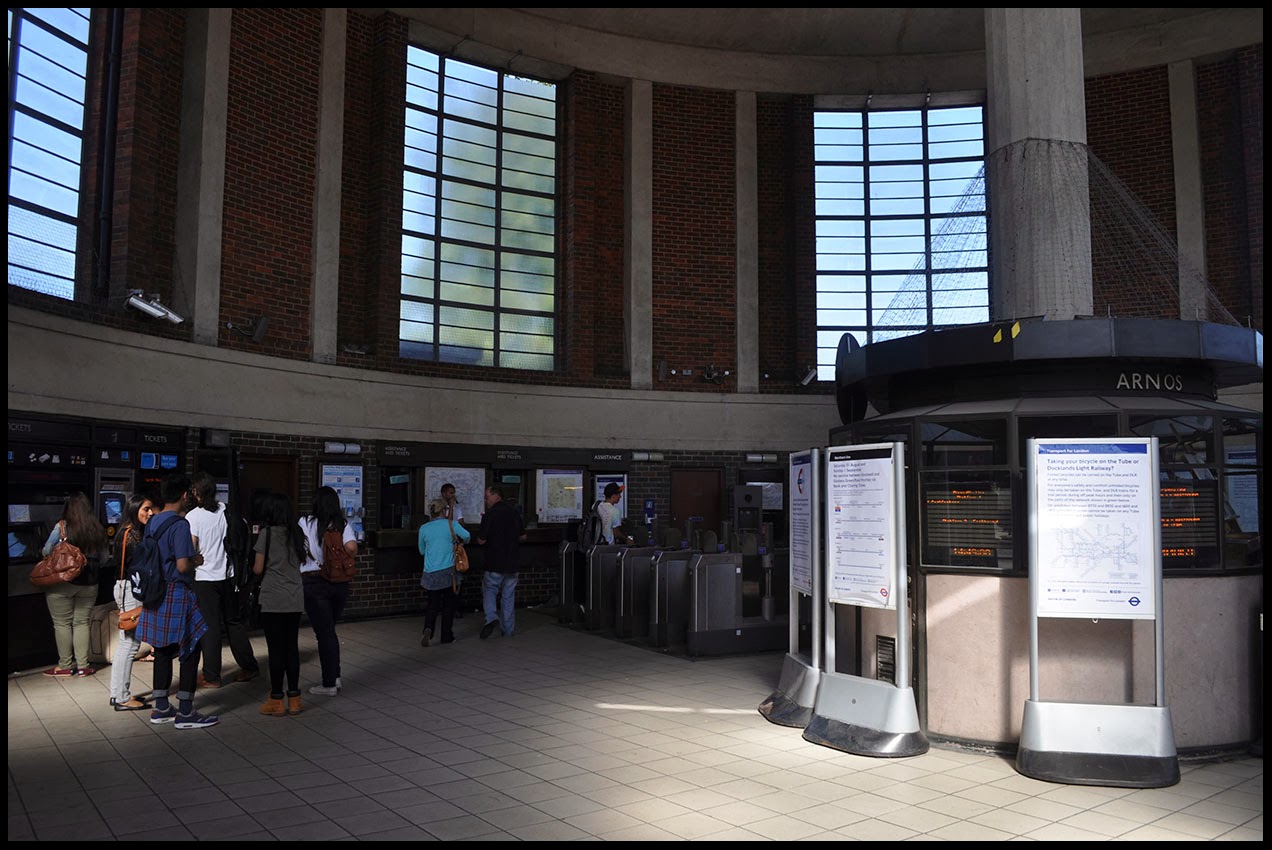 Posted by Phil Beard at Wednesday, February 05, 2014 No comments: