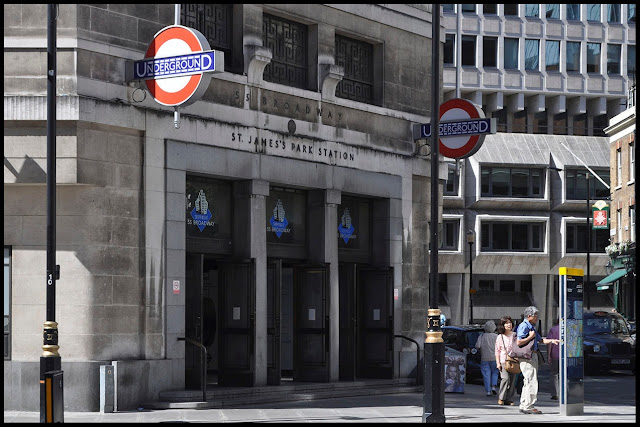 These are some notes and photographs from a visit to 55 Broadway, courtesy of the Twentieth Century Society. Completed in 1929 and designed by Charles Holden, who would later design many innovative Underground stations as well as the monolithic Senate House, it has enjoyed a mixed reception. Messrs. Jones and Woodward in their Guide to the Architecture of London describe it sniffily as “difficult to be very enthusiastic”. In recent times it has been celebrated as a masterpiece of Art Deco which seems even more misguided. A few decorative motifs featuring wings and some vaguely Streamline sculptures are not really enough to justify an Art Deco designation. This cruciform, angular, rather severe block has none of the flamboyance associated with Art Deco and might be better seen as a homage to Manhattan – the principle design influence having come from high-rise New York office blocks. 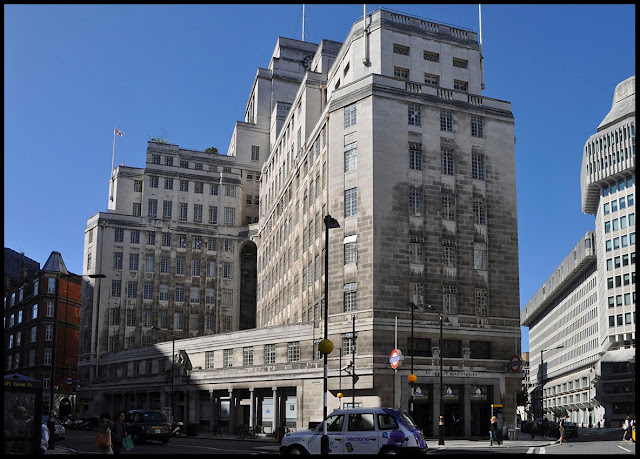 It was upgraded to Grade I listed status in 2011 and may well be at the peak of public esteem. In a few years it will disappear from the public realm when it’s converted into apartments for oligarchs, non-doms and Asian billionaires. London Underground, the present occupants plan to move out in 2015, and cash in on the asset value. A building that was conceived not only to serve the needs of a public service but also to function as a highly visible statement of its confidence in the future will be reduced to a historical curiosity. The fabric and the detailing may enjoy some protection from the depredations of developers but the space and volume will be emphatically private and off-limits to the public. For all these reasons the opportunity to visit and explore was not to be missed. 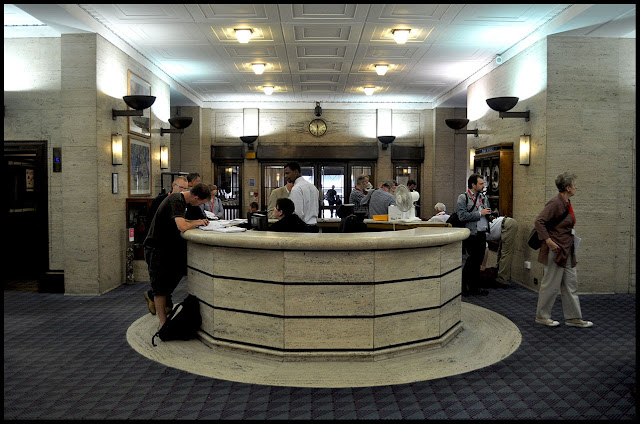 Holden and the client (London Electric Railways) wanted a building that would be as tall as possible within the heavy restraints of 1920s planning controls. They went for a maximum permitted 10 floors of accommodation and added a 4 storey tower which, due to fire regulations had to be left unoccupied. The cruciform plan offered natural light to all offices with services concentrated in a central core. When it opened it was the tallest office building in the city, exceeded only by sundry church spires and domes. London Transport was an organisation where, unusually, genuine pride was taken in the corporate tradition of excellence in architecture and design. This in turn promoted a culture of conservation, even at the expense of commercial considerations, and some of that can be seen still in this building and others. To this day it hasn’t been entirely extinguished despite the economic orthodoxy that dictates that absolutely nothing can be allowed to get in the way of optimising revenues. 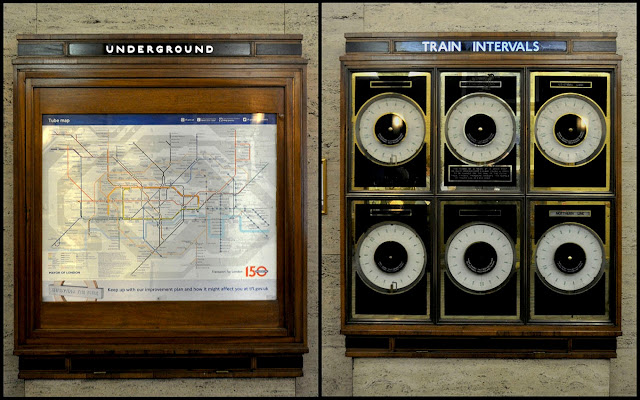 The visit included offices on the 7th. floor that had been occupied by senior luminaries, including that of Frank Pick, who in the 1930s had embedded an enduring culture of excellence in design that extended to every activity. The spirit of Holden and Pick still endures in the sense of sober and principled dedication to design values that hovers in the sombre corridors lined with walnut doors. There was no economising on materials with internally a generous use of Travertine marble on floors and wall-linings plus custom built fixtures and fittings in decorative bronze, an exterior in best Portland stone with Norwegian granite and black Belgian marble, but the overall impression remains one of high-minded restraint. The final treat of the day was a four floor footslog to the top of the tower to sample the panoramic views. We were warned not to photograph either the Home Office or Scotland Yard (it seems paranoia runs high in these places) which was no hardship as both are distinctly repellent buildings. So the final photo is an opportunity to survey London’s chaotic jumble of towers and spires. 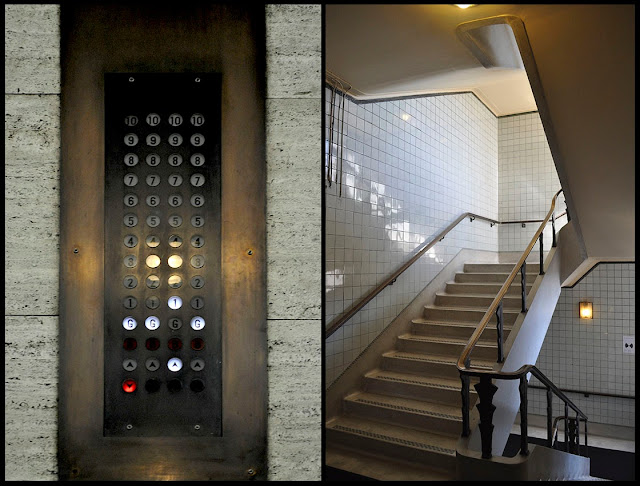 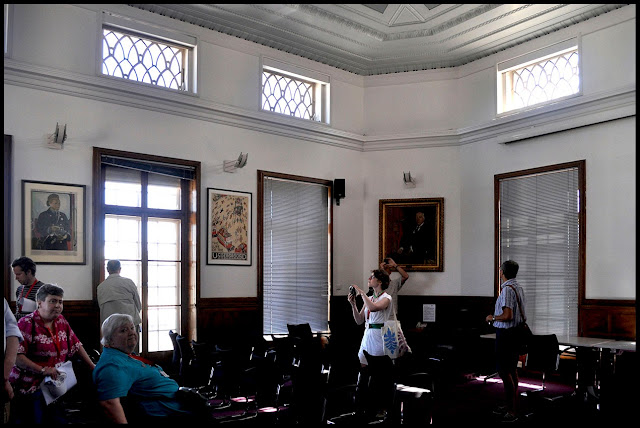 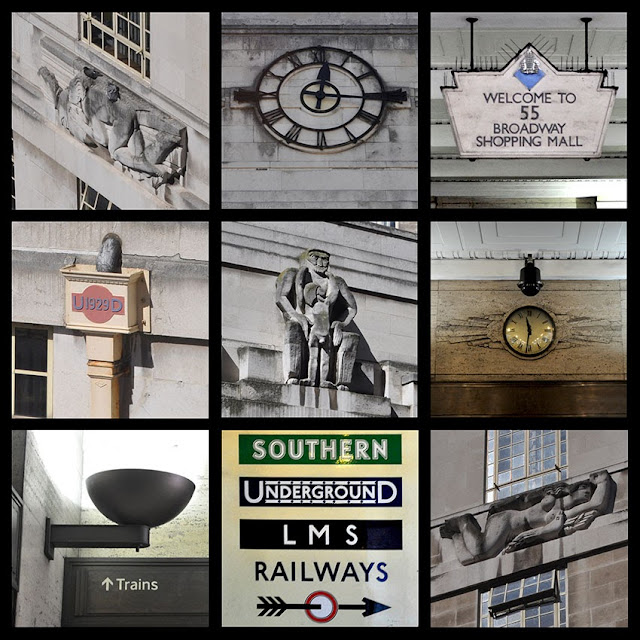 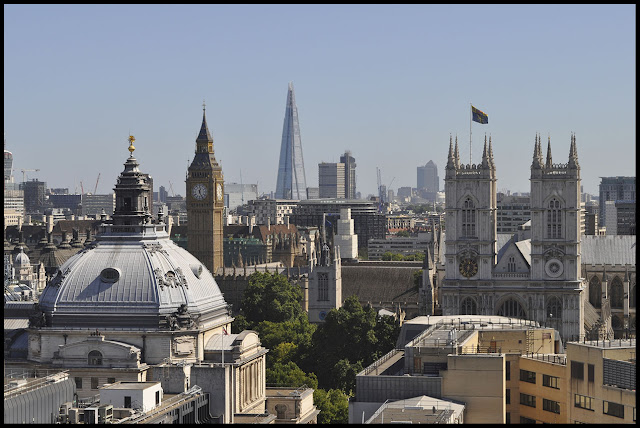 Postcard of the Day No. 60, Nagasaki 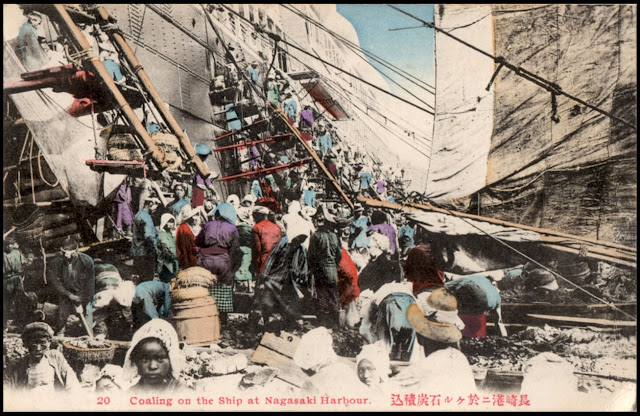 One of the incidental pleasures for the ocean going traveller en voyage to some remote colonial outpost in the service of the Empire, was the opportunity, when in port, to observe the efforts of the native population to resupply the ship by hand with coal. The ill co-ordinated struggle of hundreds of exhausted natives clambering the ship’s side with inordinately weighty baskets of coal must have brought a supercilious smile to the face of many an aspiring minor administrator as he languished on the ship’s rail and reflected on his good fortune in belonging to a superior racial group, destined for far higher things than the unfortunate creatures toiling mightily below. 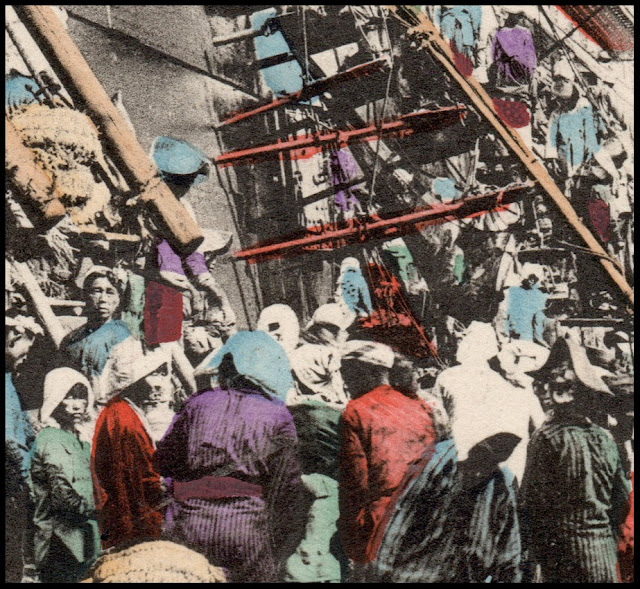 These postcard images from Nagasaki present the spectacle of coaling the ship in uncomfortable close-up. Inconveniently they remind us of the demeaning character of slave labour when destitution and despair reduce the cost of labour to a pittance. The contrast in human dignity between those condemned to servitude and the ship’s privileged passengers could not be greater. All this seems to be written across the faces of the workforce as they swarm through a matrix of rope and bamboo, breathing copious quantities of coal-dust into their lungs. An epic composition of human misery makes a curious subject for a postcard - it could also have made a magnificent painting if an artist of the calibre of Géricault had been available. 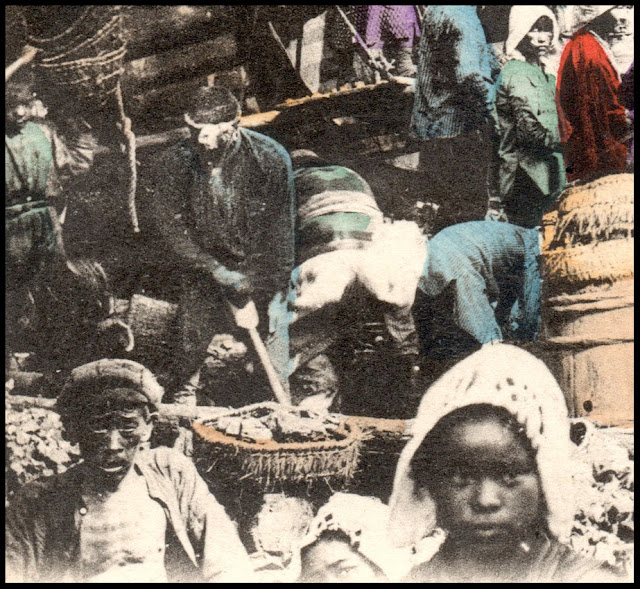 Nagasaki’s place in history as Japan’s principal port for trade with the outside world during the years of isolation has been overshadowed by the nuclear destruction of August 1945. The leap in technology from the era of intensive labour to the detonation of atomic weapons took about 4 decades and with hindsight we could imagine that the agonised expressions to be seen somehow foreshadow the appalling events that lay in the future. To compare and contrast, see the jaunty cover of Meccano Magazine dated March 1926 where a distant team of turbaned labourers make light work of their task as the seabirds circle in picturesque formations. 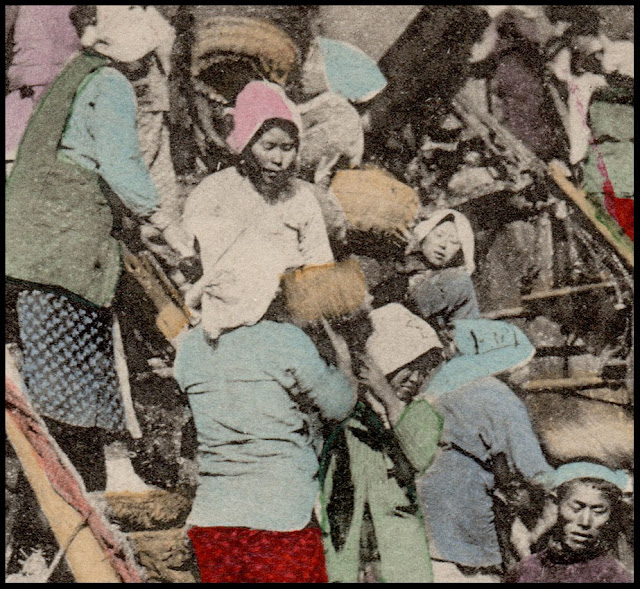 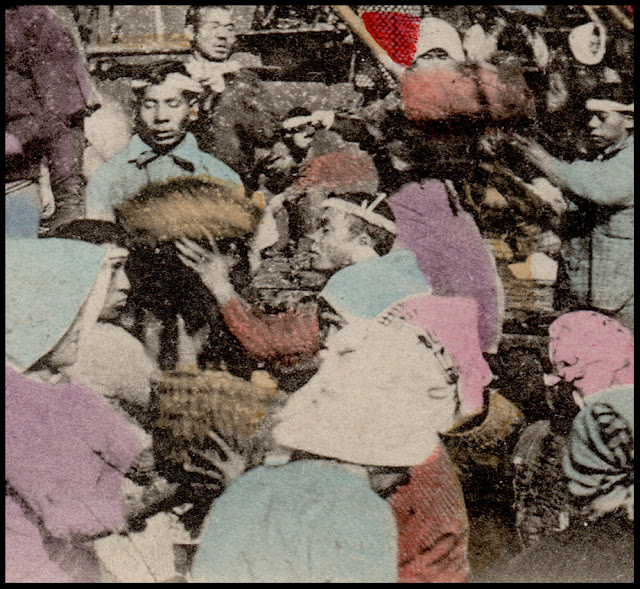 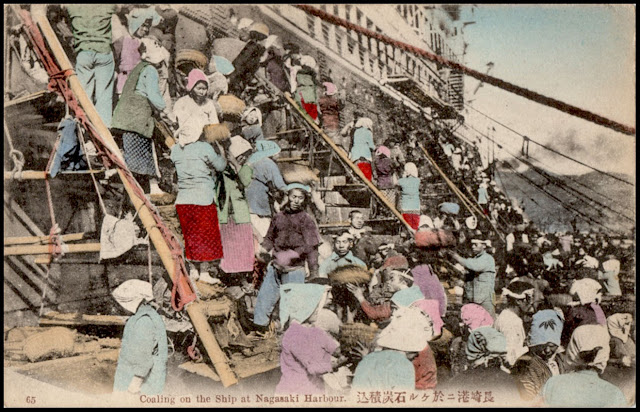 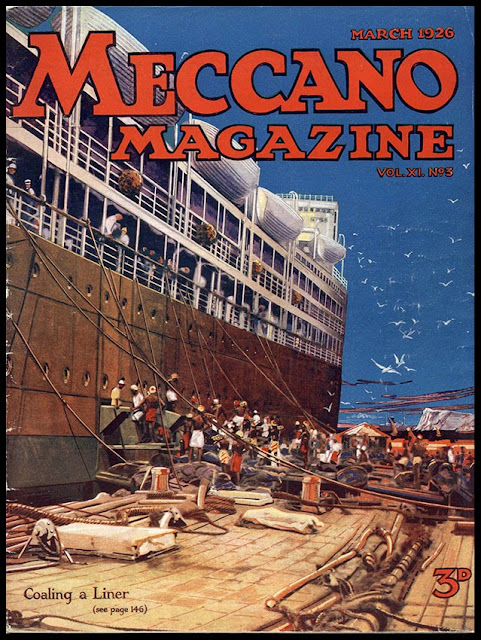 There’s a school of thought that claims the invention of the shipping container did more to transform the world we inhabit then even the invention of the internet. There may be something in it when you consider that all the hardware that gives us access to the digital universe has made its way around the globe, buried deep inside a shipping container. Add to that the impact on world cities as port facilities migrated away from urban areas leaving vast tracts of development land in inconvenient locations. Plus the human cost when millions discovered their cargo handling skills were no longer required. The regeneration industry would hardly exist if it wasn’t for the shipping container. Europe’s largest regeneration project is in the former docklands of Marseille where this installation (above) serves as an affirmation of the instigator of all the urban upheaval.


Sixties Minimalism, especially the immaculate constructions of Donald Judd, prepared us for the aesthetic contemplation of containers with their structural geometry, ribbed surfaces and industrial paint finishes. Stacked high on the waterfront in random arrangements they combine to offer an arresting visual experience to an audience raised on a diet of Modernist geometry courtesy of the Bauhaus or De Stijl.

If you wish to own one yourself there’s a thriving market on eBay with a choice of life-expired 20ft. and 45ft. examples at prices between £500 and £1500. Not all are watertight and condition is everything. They may mostly be sought by business and young inner-city creatives but some end up in suburban gardens, transformed into workshops or storage facilities. My preference would be to install one in a vertical position with library shelving around the sides, a circular staircase to access the books and an Observatory on the top.

Posted by Phil Beard at Wednesday, September 04, 2013 No comments: