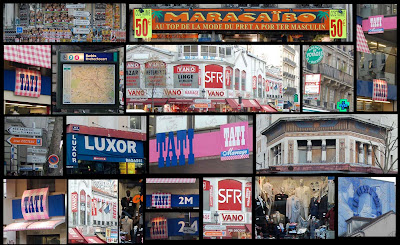 This is one of Paris’s most clamorous, raucous and cacophonous crossroads. Three arrondissements meet at the intersection, the 9e, 10e and 18e. It’s a maelstrom of conflicting traffic flows and tailbacks overshadowed by the Métro Aérien that clatters overhead on a muscular viaduct supported by massive steel columns. The combined sounds of trains and traffic dictate that human speech has to be delivered at maximum volume. When this acoustic aggregation reverberates from the sub-surface of the overhead railway, the decibel level approaches the red zone. There’s a constant flux of pedestrian movement and an ethnic mix that reflects the full range of Francophone post-colonial economic migration. 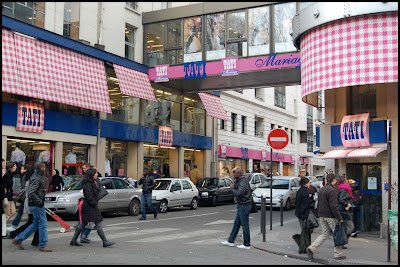 Crude but assertive graphics compete for attention from every vertical surface. At street level, the Tati store stretches west along Boulevard Rochechouart offering its attractions to the less affluent bargain-hunter. It functions as an antithesis to the grands magasins while the blue and pink colour scheme and branding brings a new dimension to the French reputation for excellence in the arts of display. Diagonally opposite on the corner of Boulevard Magenta is the facade of the long closed Egyptian-styled cinema, the Louxor. This is the subject of a protracted restoration project scheduled to begin next year (2010). Read more about it by following this link. There is a pervasive quality of dilapidation to the crumbling and unloved frontages. A special pleasure is to note that the name of Jean Cocteau has been immortalised by attaching it to a car park. Others in this vein might include the André Breton Laundrette or the Guy Debord Déchetterie. 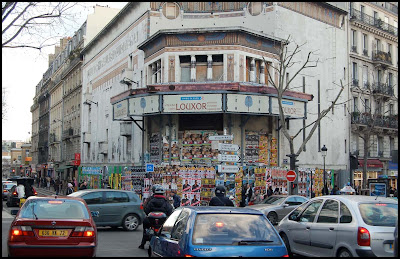 The Métro station, Barbès-Rochechouart, is the westernmost stop on the elevated section of Ligne 2 where trains and track make a spectacular plunge into the subterranean gloom, en route for Anvers and Porte Dauphine. Below ground, Ligne 4 provides links to the Marché aux Puces at Porte de Clignancourt to the north and Chateau d’Eau with its African population to the south. The locality is close to la Goutte d’Or district with a long established North African population, an area extensively prowled by Richard Cobb on his journeys of urban discovery. A little further to the east are the twin ferrous corridors feeding trains into Gare du Nord and Gare de l’Est. If you have visited Paris and feasted well on the treasures of the Right Bank, Left Bank, Grands Boulevards, it might be time to experience a very different aspect of the city with a trip to Barbès. 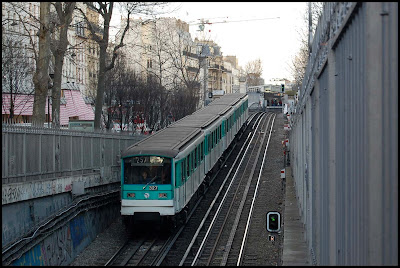 Fantastic description - I love this neighborhood.

I think you're right when it comes to visiting this place after seeing all the typical places to visit in Paris. Although the area is not exactly the prettiest in Paris, I dare to say that it represents the essence of the city nowadays. Your description is great though!