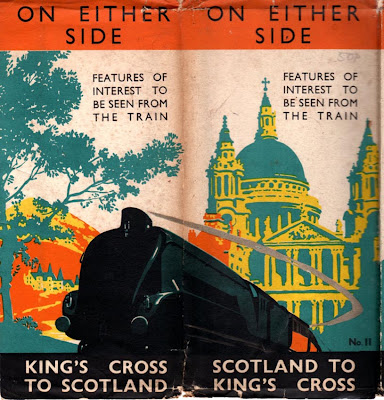 Today’s images are the front and back cover of a pamphlet produced in the 1930’s by the London and North Eastern Railway (LNER) to promote the visual delights to be experienced through the carriage window on a trip from London to Edinburgh on the route of the ‘Flying Scotsman’. The illustration in best ‘sachplakat’ style is by Frank Newbould (1887-1951). Newbould was a master of this idiom and worked frequently for the LNER, his most famous series being the ‘East Coast Frolics’. In today’s dull and functional trains there is a complete absence of co-ordination between the relative positions of windows and seating with the result that only a tiny minority of passengers have any sort of view to enjoy. The designers responsible for this travesty should be thrice cursed and condemned to travel for eternity in one of their own vehicles with nothing to look at but the blank carriage side. 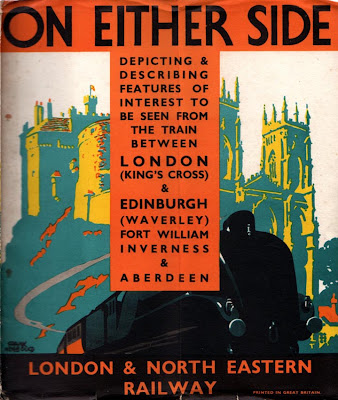 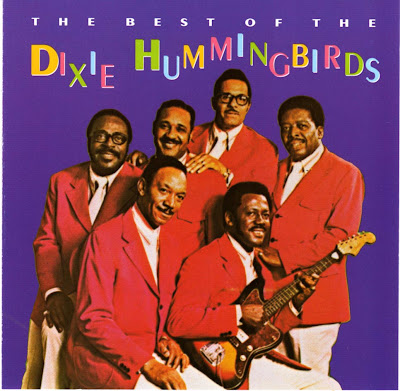 By a trivial coincidence I bought a CD of “The Best of the Dixie Hummingbirds” on Tuesday, the very day on which Ira Tucker, lead singer since 1938, died after an astonishing 70 year career with the same gospel group. To read his obituary in the New York Times, please click here. The Dixie Hummingbirds caught my attention in the early Seventies when their voices were heard on a Paul Simon album. The vocal work was impassioned and the harmonies were as gorgeous as the name was exotic to English ears. This powerful music was instantly accessible to someone with a music sensibility conditioned by exposure to Sixties Soul and I have caught up with their back catalogue over the years. There is a quality of wit and humour present in their work of a kind not often found in the gospel genre. The song entitled ‘Let’s Go Out To The Programs’ (1953) written by Ira Tucker is a sequence of subtle parodies of their competitors on the gospel circuit, part of a tradition of songs about other performers and inspired by ‘Juke Box Saturday Night’ by the Modernaires. A later fine example of which is Sam Cooke’s ‘We’re Having A Party’. To complete the circle, the first group to be name-checked in ‘Let’s Go Out To The Programs’ is the Soul Stirrers (lead vocalist, Sam Cooke).

Ira Tucker will be remembered for three great contributions to the Dixie Hummingbirds. Many of the wittiest and cleverest compositions were his and his innovative vocal style created the essential sound of the group. But above all, his electrifying on-stage theatricals, hurling himself to his knees in prayer, leaping from the stage and running at speed through the aisles blazed a trail for others (James Brown, Solomon Burke) to follow. My admiration for gospel music has led some of my acquaintances to suspect that I may be on the point of a twilight conversion to born-again Christianity. To which I have to say that, as far as I know, it is not essential to be a Christian to appreciate the majesty of the Ghent Altarpiece, or the mystery of Mantegna’s ‘Agony in the Garden’, or the dark tragedy of Rubens’ ‘Descent From the Cross’. Jerry Zolten’s book, ‘Great God A'Mighty!’ is a detailed and fascinating account in which the career of the Dixie Hummingbirds is viewed in the wider context of African-American music and culture. At the opposite end of the spectrum from Ira Tucker’s frenzied stage-craft stands the substantial and imposing figure of Big Joe Turner, about whom there will be a future posting. 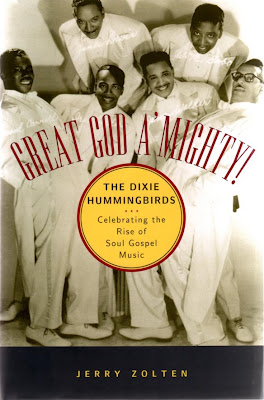 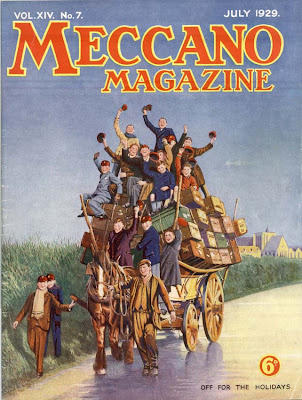 The long school holidays are already upon us for those who pay for their education and this Meccano Magazine cover from July 1929 celebrates the departure of an affluent cross section of the readership en route for the local station and the journey home. It would be entertaining to see this tradition revived if only for the pleasure we could all take from observing future members of the Bullingdon Club out and about among us mere mortals, perched on top of their belongings. Joy is unconfined as the future captains of industry look forward to many long sunny days assembling Meccano constructions and tormenting their younger siblings. Health and safety considerations rest in the capable hands of a cheery rustic swain from the lower orders sporting cloth cap, muffler and ‘weskit’. Probably unacceptably risky by today’s standards although one desirable side effect would be a reduction in the number of 4 by 4’s on the roads at holiday times. 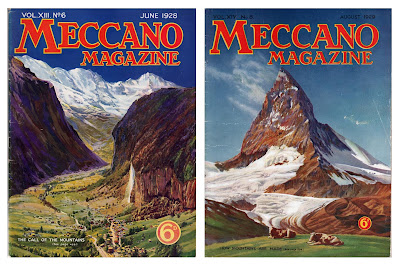 This goes to show that even the picture editors at Meccano Magazine occasionally grew weary of the endless procession of steam technology and heavy engineering across the cover and resorted to uplifting images of mountain scenery or peasantry at work in the countryside. This was a period when Englishmen of great courage and stern character were pitting themselves against the impersonal might of mountain peaks around the globe to the greater glory of the mother country which was all very thrilling to the schoolboy reader. The appeal of the romance of the pineapple and the extraction of sugar from trees is less obvious, other than a common theme of sweetness. 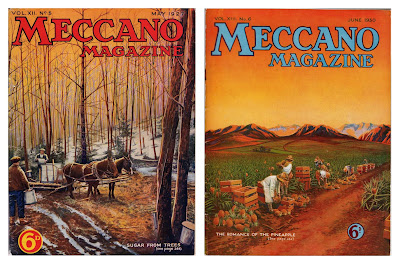 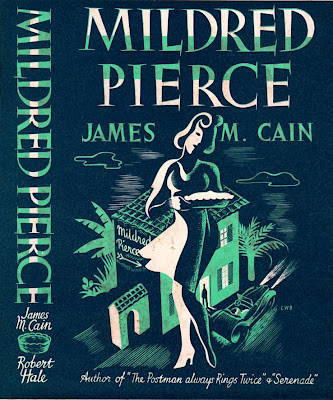 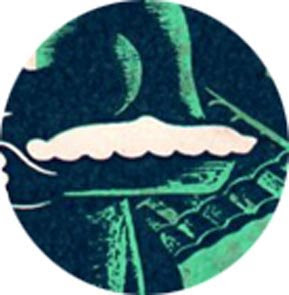 Marmite definitely does you good. 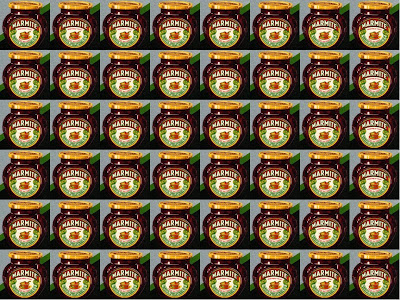 The curious cult status of this humble product is long established with its “Love it or hate it” advertising and a plethora of Marmite branded collectables including Limited Editions where the basic substance is combined with an unlikely partner such as Guinness or Champagne. Perhaps Marmite and Swarfega or Marmite and Toblerone could be next. The distinctive Marmite jar is certainly a classic of consumerism and the contemporary label design is visually a close relative of its distant ancestors. Like Swan Vestas matches, the pack has been updated with caution and care. It sometimes appears that there is more than enough written about this product but this small selection of Marmite related printed ephemera is not unattractive or entirely devoid of charm. So, here goes! No lengthy commentary, just some images. 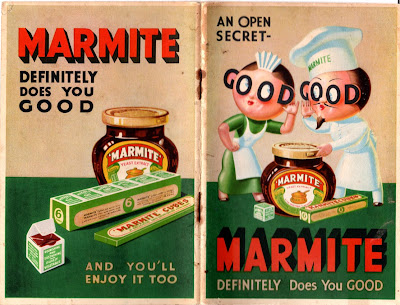 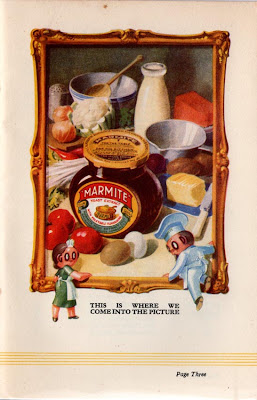 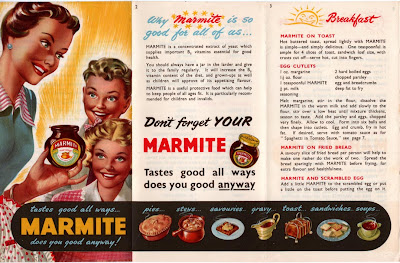 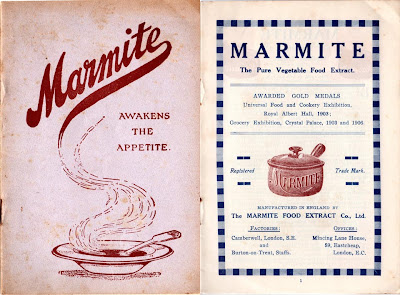 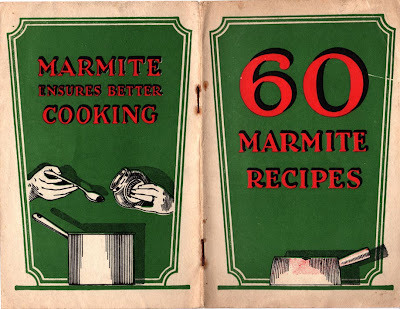 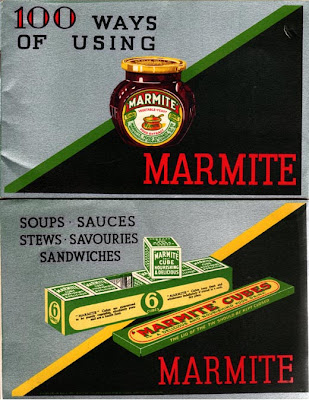 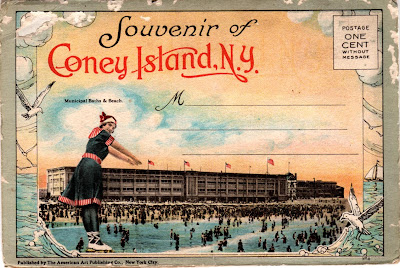 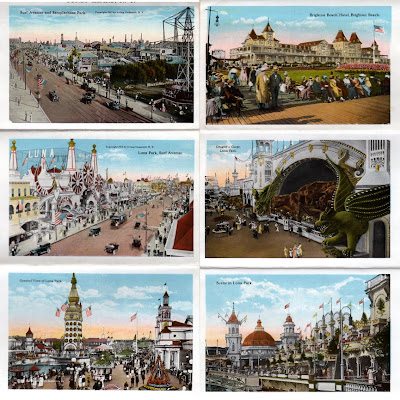 A fascinating concertina card produced by Curt Teich for the American Art Publishing Co. The images bear © dates between 1912 and 1920, suggesting it went on sale in the early Twenties. The subject matter is a feast of exuberant architectural structures dedicated to leisure and amusement many of which no longer exist. Luna Park closed in 1944 after a fire: Steeplechase Park finally expired in 1964 and Coney Island resort went into a long period of decline. Recent decades have experienced a tortuous history involving a large cast of predatory developers each presenting equally unacceptable plans. Plots of land have changed hands with bewildering speed, half-baked schemes have struggled to reach any sort of completion and many of the surviving relics of the resort’s heyday have been vandalised and destroyed with the connivance of politicians and developers. Sadly, the spectacular Elephant Hotel is not to be seen on this card but can be accessed by clicking here. In 1946 the great Woody Guthrie became a Coney Island resident when he moved to an apartment at 3520 Mermaid Avenue. The persistent air of decay and the melancholy of a paradise lost have inspired many artists so it’s no surprise that Tom Waits has paid several visits to Coney Island in song. 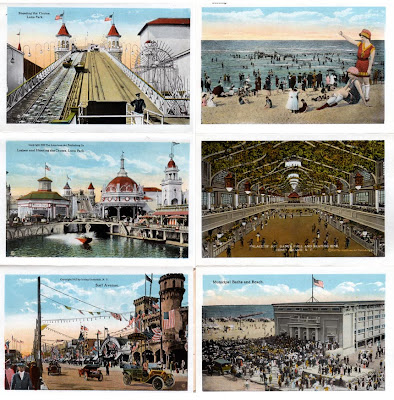 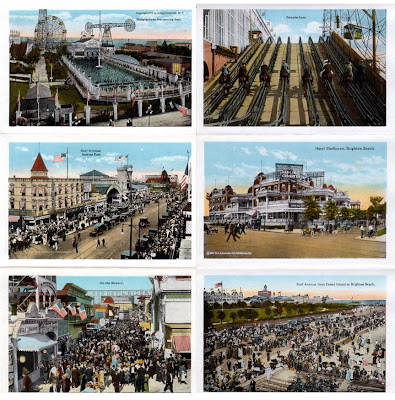 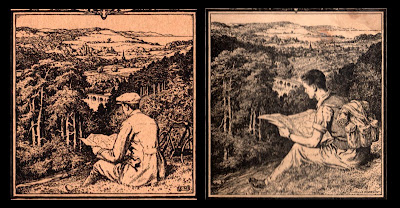 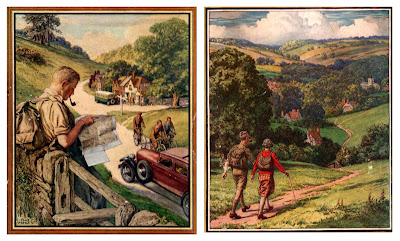 Ellis Martin supplied outstanding cover illustrations for Ordnance Survey (OS) maps for two decades between the wars and the images he produced have come to epitomise a golden age of travel and exploration when the pedestrian and the motor car coexisted on more or less equal terms. When he began drawing for the OS in 1919 the typical rambler wore plus fours and a Norfolk jacket. By the time he retired in 1939 the typical outfit was a less formal khaki slacks and short-sleeved pullover with shirt sleeves rolled up. He effortlessly evokes the luxuriance of high summer vegetation and the rolling hills and deep wooded folds of the British countryside. Open topped cars, green country buses, bulging rucksacks, a pipe full of tobacco and best feet forward are the order of the day. In his excellent book, Map Cover Art (1990), the definitive guide to OS graphics, John Paddy Brown describes Ellis Martin as “the Cycling Age and the Motoring Age and the Rambling Age personified”. 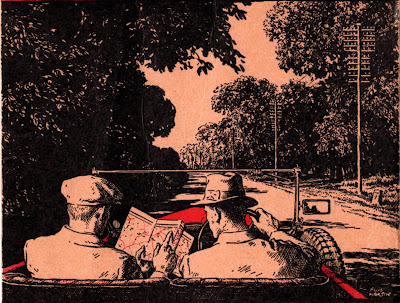 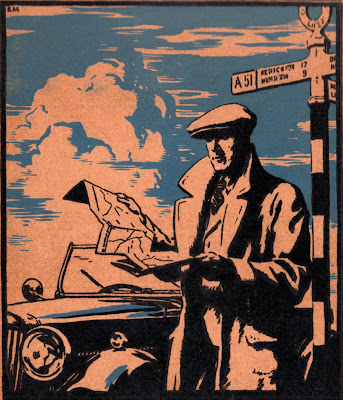 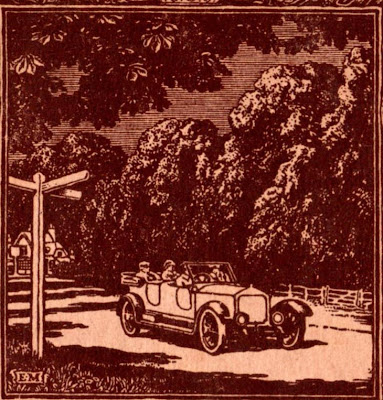 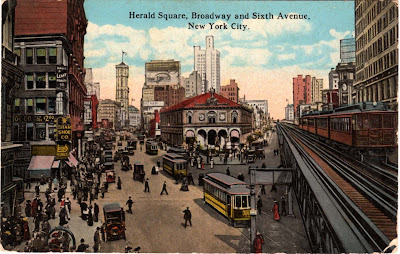 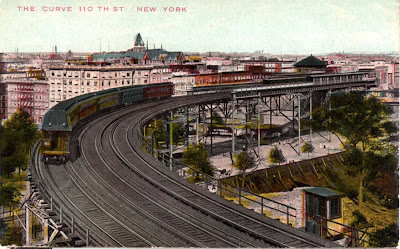 Just as Paris has its métro aérien so New York City has, or rather, had its elevated railway (or ‘El’). These postcards give a little flavour of the visual excitement they brought to the city streets as they clattered overhead. Artists and photographers were especially drawn to the visual drama of light and shade created beneath the huge metal viaducts. The lithographer, Louis Lozowick had a passion for recording the visual fragmentation of the street scene as shadows ricochet underneath the ‘El’ and did so with exemplary finesse. The notoriously grumpy English artist, C R W Nevinson tackled the same subject with creditable results. Edward Hopper, John Sloan, Charles Sheeler and Reginald Marsh all explored this imagery. Chris Mullen has the outline of a lecture that was never delivered on this topic at the Visual Telling of Stories and includes a comprehensive list of the special qualities that distinguish the ‘El’.

A wonderful short film, Third Avenue El, made by Carson Davidson is available at the splendid Prelinger Archive and is compulsory viewing for anyone curious to understand the fascination of this long obsolete means of transport. The film was made in 1955, just 2 years before the system was closed and subsequently demolished. Photographers who captured this subject include Berenice Abbott, André Kertész, Andreas Feininger, Todd Webb and even Cecil Beaton. 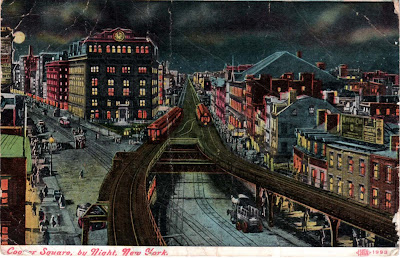 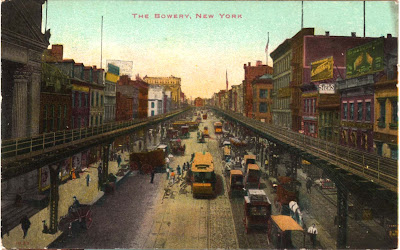