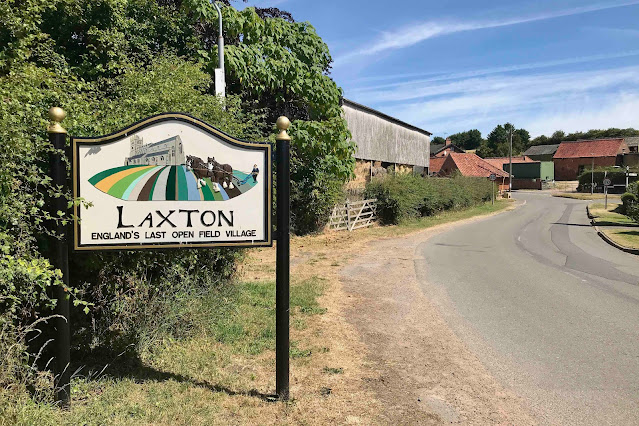 On July 11th. the open fields of Laxton lay scorched under blistering sunshine.  Not the best day to explore this Nottinghamshire village that, by the vagaries of history escaped enclosure and today survives as the last functioning open-field village in England. It’s one of those fascinating rural anomalies that seems worthy of a pilgrimage even in the knowledge that it will yield little in the way of spectacular sights. What makes Laxton unique is best appreciated by looking at a map that shows how each field is divided into strips which are then allocated to local farms.  The origin of this system lay in the early medieval period when the small farms clustered in the village expanded their land use by clearing the woodland that surrounded them for cultivation.  In the interests of fairness the newly available land was divided into strips and distributed among the local farmers, all of whom were tenants of the Lord of the Manor, so that all received portions of good, average and poor quality land. Which is the reason that Laxton farmsteads are concentrated in the village centre rather than being dispersed through the surrounding countryside. 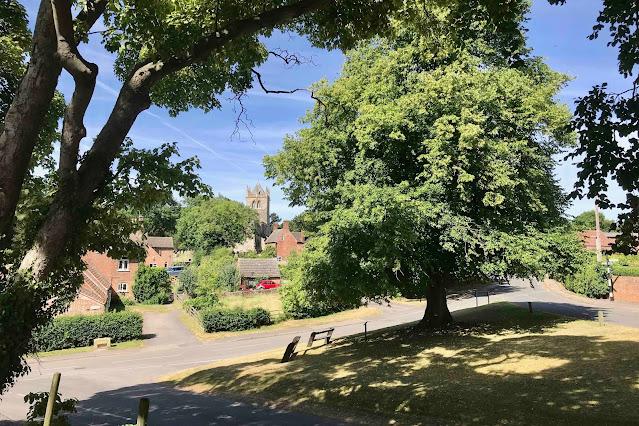 These egalitarian arrangements couldn’t survive the gradual erosion of tenants’ rights that began in the 13th. century when manorial lords acquired the right to consolidate the strips of land into single fields. For the open-field system it was a lingering death as the 18th. and 19th. century enclosure acts accelerated the process with the last examples being lost by 1850.  Elsewhere in Europe where various versions were  widely used it lasted a little longer.  In Russia it took Stalin’s policy of forced collectivisation to bring it to an end. 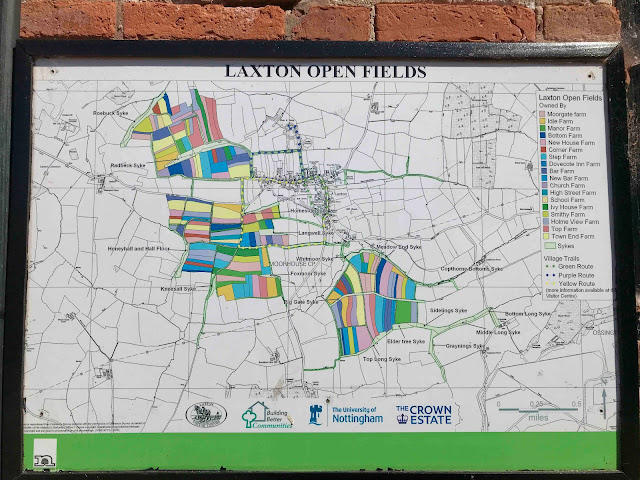 Among several explanations for the survival of Laxton are a lack of agreement on enclosure by local farmers and an impecunious Lord of the Manor (Earl Manvers of Thoresby Hall) lacking the funds to pay for the work. In 1952 the village land freehold was sold to the Ministry of Agriculture by Gervas Pierrepont, 6th Earl Manvers and then passed into the control of the Crown Estate both of whom favoured preserving the existing system as a historic survival. In 2018 the Crown Estate put the village of Laxton up for sale with the following classic, mealy mouthed excuse, “As a commercial real estate business, we recognise we may not be best placed to manage the estate moving forwards and have therefore reached a decision to sell.” They claim to be looking for an owner in the heritage sector who would honour the commitment to maintain the open-field system but the real reason must be a desire to be rid of an asset that can’t be endlessly sweated to maximise a financial return.  Since 2020 the new owner in an unusual circular move is The Thoresby Settlement, part of the Thoresby Estate, owner of Thoresby Hall, once the home of the impecunious Earl Manvers. 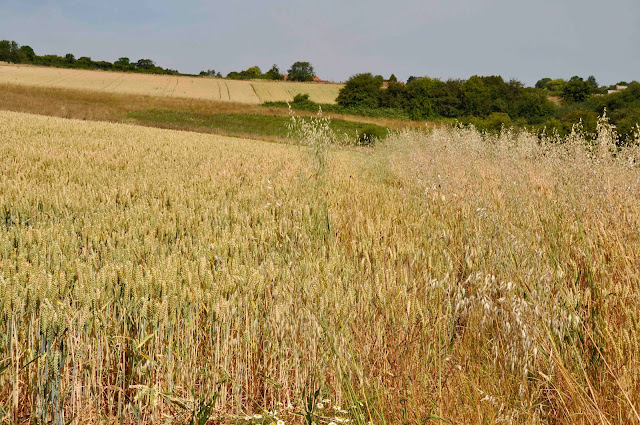 There’s a fascinating text online from 2010 when the resident of Thorseby, Hugh Matheson, delivered his thoughts on the past and future of Laxton.  To a layman it reads as an admirably objective assessment of the problems that flow from maintaining Laxton in its present state - elderly and difficult to replace tenants and the need to make farming small parcels of land financially viable.  At the same time there was a genuine desire to find a way forward that could secure Laxton’s future.  The conclusion was that the growing number of agencies and stakeholders involved required strong leadership and a willingness to invest in the future.  This would appear to be beyond the capacity of the Crown Estate, implying that a change of stewardship was essential. Twelve years on and Mr Matheson has his wish and it will be interesting to see what the future holds for Laxton as the Thoresby Estate exerts its influence. It will certainly be a challenge to develop Laxton as a heritage attraction with a wide appeal to the general public without compromising the features that make it a really special place. 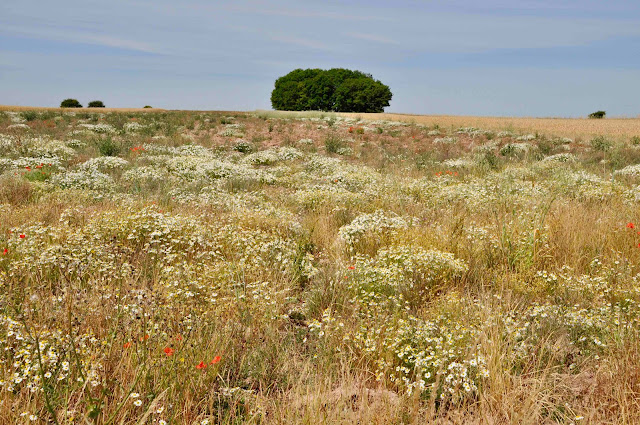 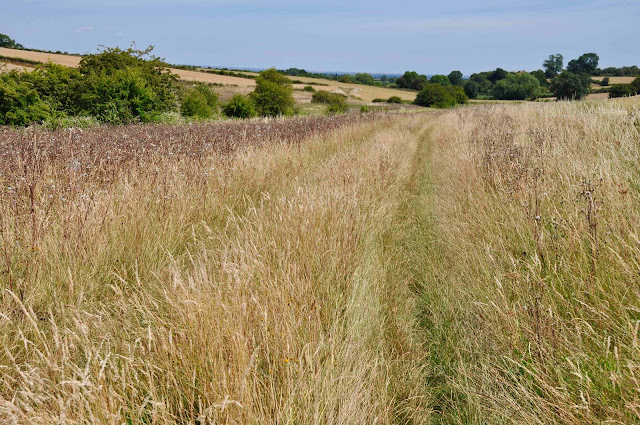 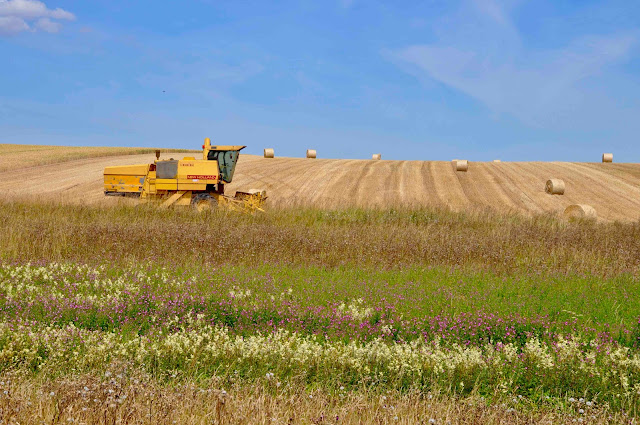 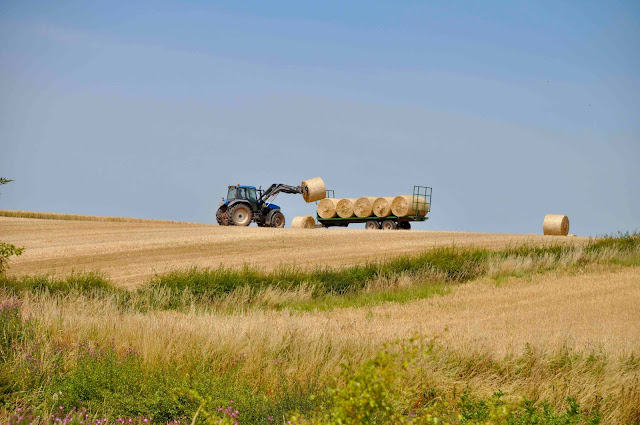 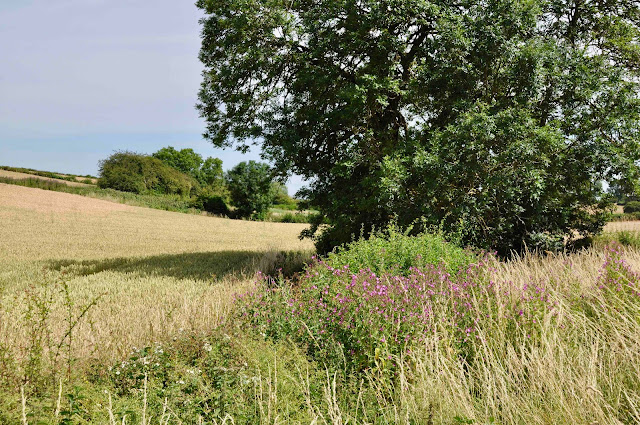 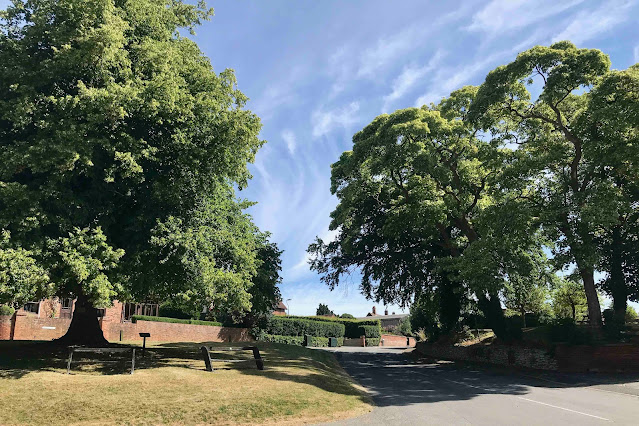 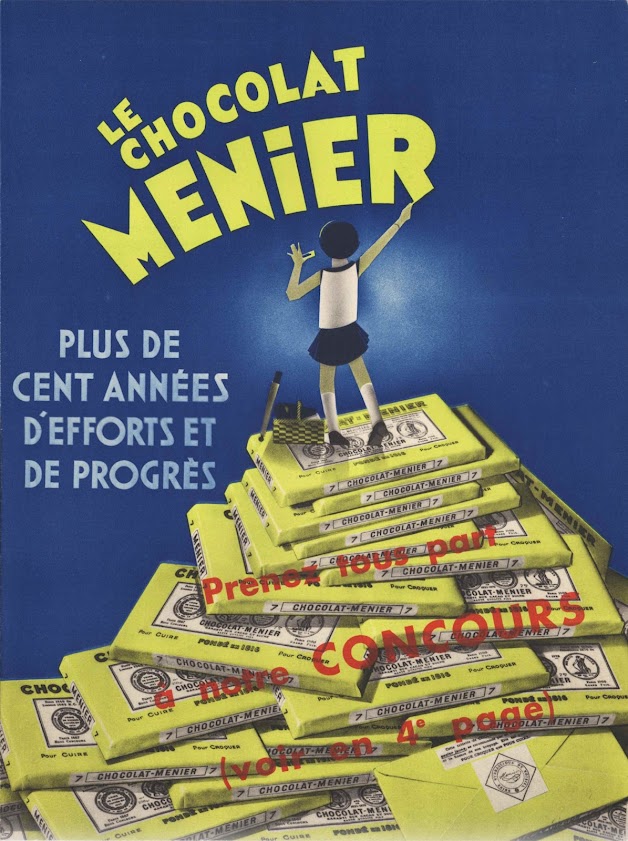 Twelve years ago I visited Noisiel to see the unique Chocolat Menier factory complex designed by Jules Saulnier on the banks of the River Marne, east of Paris.  The factory was in production from 1871 to 1993 and in 1997 was remodelled to serve as the headquarters of Nestlé France. Le Moulin Saulnier is the landmark building - behind the chromatic brilliance of its ceramic cladding lies an interior in which iron box girders and arched roof trusses create uninterrupted floor space for machinery.  Since 2010 I’ve acquired some vintage postcards of Noisiel that can be seen below, what they confirm is how well everything appears to have been conserved. A recent acquisition is this corporate prospectus of the Noisiel factory published by Menier in the 1930s to mark more than a century of progress. On the cover is a familiar school girl figure in use in Menier publicity since 1892, as airbrushed and updated 50 years later for the 1930s. There’s a double page spread of photos illustrating the major buildings and the manufacturing process at the Usine de Noisiel.  Alongside a chance to win a Peugeot 302 “luxe”, more photos can be seen on the back, including views of the internal railway that ran through the premises. 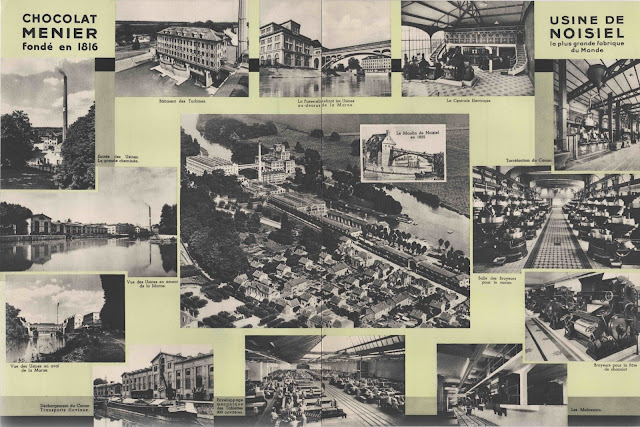 In 2020 Nestlé France moved out of Noisiel to new premises in Issy-les-Moulineaux and disposed of the entire site to a developer, leaving the buildings to face an uncertain future.  Much wrangling is now going on between developers, local authorities and nearby residents - developers want to maximise the residential potential while locals are looking for community and cultural facilities.  The buildings have some protection as National Monuments but many spectacular interiors could be lost whichever way the argument is settled. Some reports say that the developers intend to permit a number of community enterprises to operate within the site on a temporary basis until 2024, the date set for launching the redevelopment.  This is unlikely to offer any public access to the site. More Chocolat Menier posts can be seen here and here. 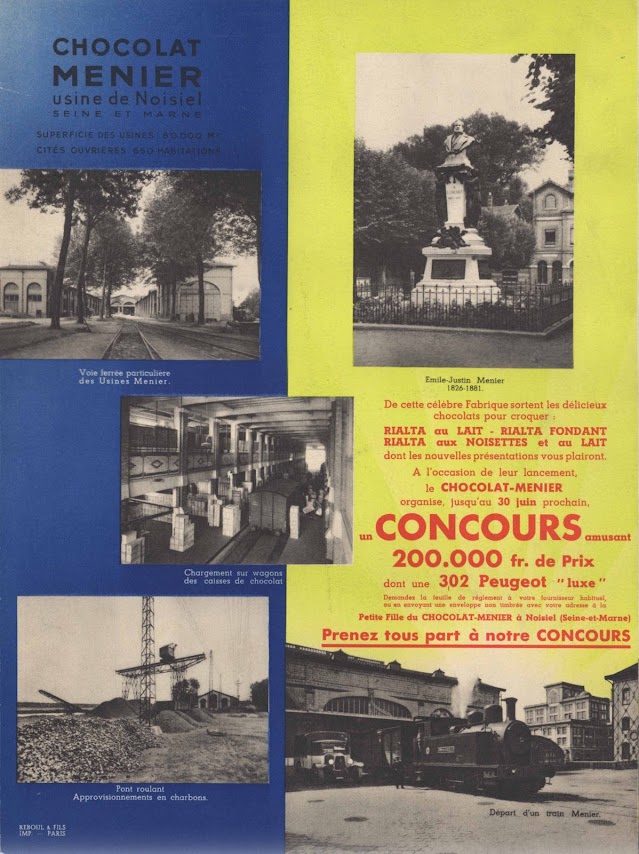 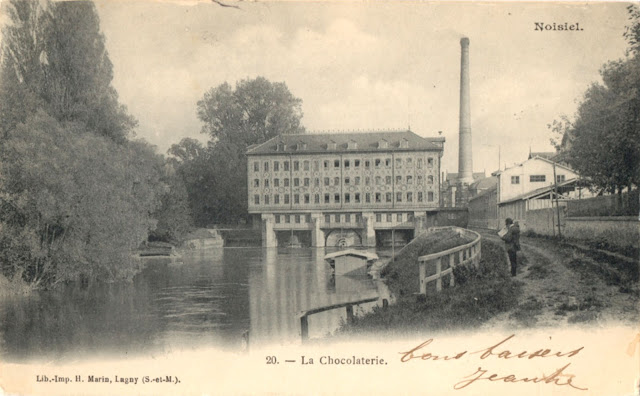 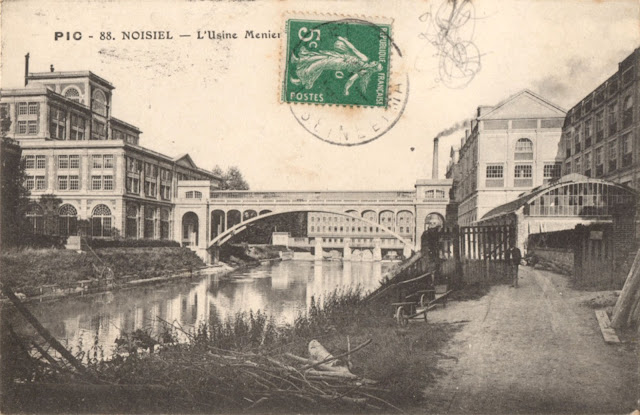 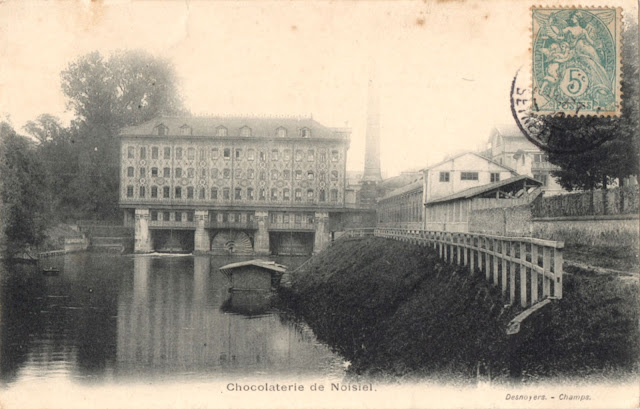 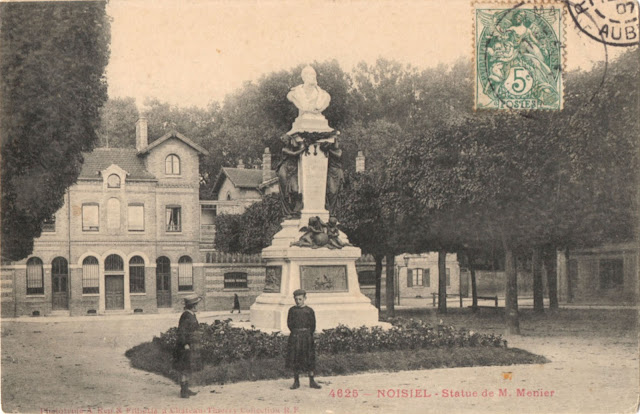