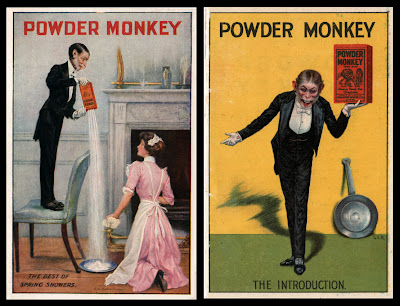 Today we welcome back an old friend – Victorian England’s most industrious brand character, this time in living colour. Watch the way he nimbly balances on the border between man and primate – a discomforting presence for both supporters and detractors of Darwinism. Impeccably turned out in evening dress with white gloves to conceal unsightly hair, he springs from one set piece to another, indifferent to the limp and feeble Victorian puns that accompany his image. Admire the energy with which he bursts forth from the box to bring us the news that Monkey Brand is now available in powder form and can still be relied upon to not wash clothes. Follow this link for a previous post on this subject. 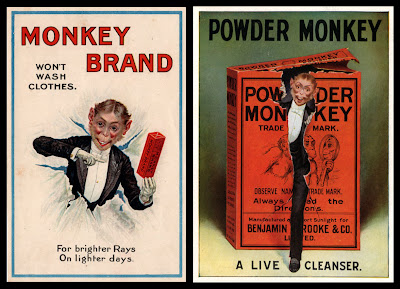 You have notifications pending 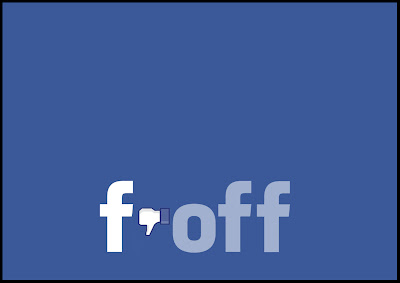 Like many of my generation I was persuaded to sign up to Faceb**k by younger family members to admire their photographic likenesses engaged in a wide range of activities, some of them legal. It soon became apparent that my digital metabolic rate is far too slow for the high level interactivity that Faceb**k offers to its users. But, by making use of a facility of Faceb**k’s own devising that enabled my blogposts to feed to my Faceb**k page, I could create the illusion of a more substantial presence. This will not be happening after November 22 as Faceb**k has announced in its high-handed way that the option of importing a blog to Facebook notes will no longer be available after that date. They have given no reason and although greater minds than mine have researched all sorts of complicated ways to get round this, I don’t think I can be bothered. It will be no great loss to the world and a gradual accumulation of digital dust and cobwebs can be expected to grace my Faceb**k page. As an act of ultimate indignity, Faceb**k has begun to display targeted advertising on my page expressing dire warnings of the perils of dementia, urging me to contact my doctor, presumably before I lose the ability to read.
Posted by Phil Beard at Wednesday, November 23, 2011 No comments:

Postcard of the Day No. 52, Leipzig 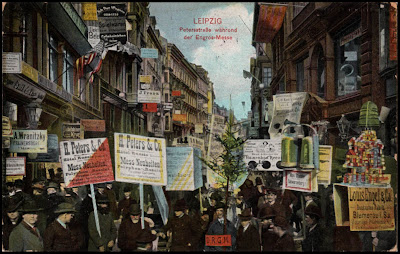 This is a puzzling postcard – it appears to be a festival of advertising placards held aloft by men in hats and overcoats. Competing messages are everywhere and in the centre an insignificant figure (labelled DRGM - Deutsches Reich Gebrauchsmuster - German Registered Design – is this satirical?) brandishes an under-nourished Christmas tree. We seem to be present at a giant carnival of commerce, a parade of publicity. This may be a complete misreading of the situation and comments and corrections would be more than welcome. The city of Leipzig is noted as a major centre of trade and its reputation is further confirmed by the two cards shown below. One presents another busy street scene in the centre of which an oversized cigarette mounted on cartwheels is manoeuvred along the highway – an artfully disguised super-gun or an inducement to take up smoking. The second card shows a Constructivist tower adapted for displaying posters for consumer products. Absurdly tall and out-of-scale, it totally disrupts the architectural harmony of its immediate surroundings but the fact that it was selected as a postcard subject suggests it was the object of some local pride. It’s an impressively brazen concept that makes no concessions to civic values. 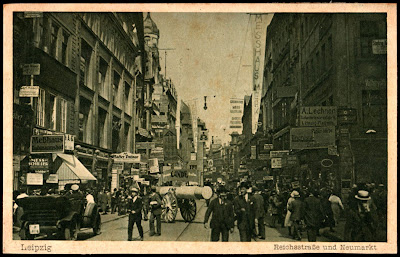 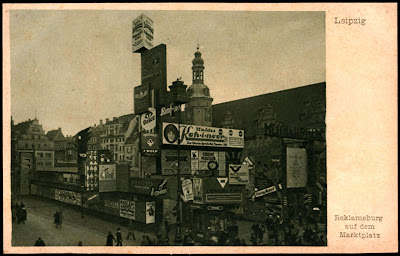 Tintin’s first trip to America took him to Chicago in 1931. In recognition of his heroic efforts in vanquishing the city’s criminal gangs, the boy reporter was offered a starring role in a billion dollar movie production by Paranoid Pictures. Eighty years on and the juvenile newshound has finally appeared on the Hollywood screen courtesy of Steven Spielberg. Despite the expensive motion capture technology, Tintinologists have not been impressed and many have denounced the film as a travesty and an annihilation of the authentic spirit of Tintin. Hergé’s wonderfully economic and expressive ligne claire was the first casualty of motion capture, discarded in favour of photorealism. Instead of being contained within the comfort of Hergé’s hand-drawn contours Tintin has been ejected into a supremely uncomfortable three-dimensional universe. To add to his troubles, his adventures, always improbable, have been launched into a new zone of special effects and percussive explosions. The problem seems to lie in the US where Tintin has never been more than a minority taste. To overcome this lack of enthusiasm the film-makers have employed the full and formulaic arsenal of shock and awe implausibility to drive the narrative at neutrino-like velocity – it remains to be seen whether the enormous sacrifice of subtlety was worthwhile when the film opens in the US in December. 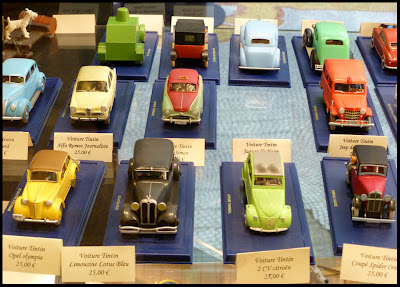 Whatever the critical reception the Tintin industry will continue to expand and fortunes will be made from the sale of mountains of memorabilia and merchandise. European collectors seem happy to pay premium prices for Tintin products – if Americans can be persuaded to do likewise, the Hergé Foundation and its commercial arm, Moulinsart, will soon be adding millions of dollars to their vast stash of euros. 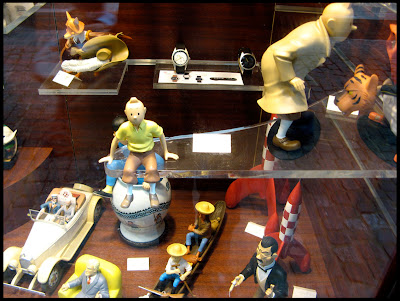 Posted by Phil Beard at Wednesday, November 16, 2011 No comments: 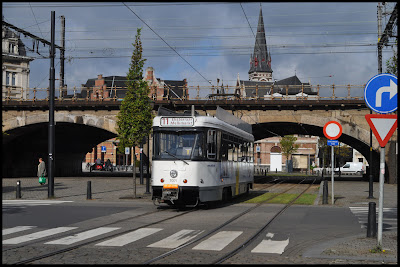 Most large cities have a location like this one in Antwerp where transport arteries intersect and dominate the sense of place. Six roads converge on this point and pass under the railway arches that carry freight traffic between Brussels, Antwerp and Rotterdam. The sepulchral gloom below the arches provides shelter for passengers waiting for the number 11 tram that links the city centre with the south eastern suburbs. Immediately to the south of Draakplaats is the up-market residential district of Zurenborg and an extensive city bus depot of absolutely zero architectural merit. On the north side, to east and west, are two older buildings into which tramlines run and in the centre, a substantial ornate bar and restaurant. There’s also a private access road leading to the freight yards with two vintage water towers adjacent. All this curious infrastructure adds up to a very strange sense of dislocation from the normal rhythms of the city. Road traffic is unnaturally light and the soundtrack is supplied by the thunderous rumble of trains overhead and the metallic squeal of tram wheels. A small selection of photographs follows below – there will be a future posting on the fantastical architecture of nearby Zurenborg. 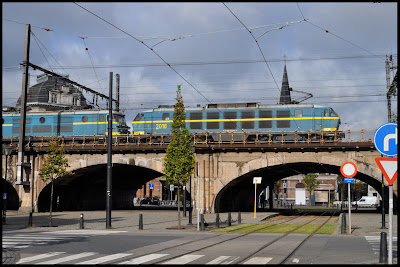 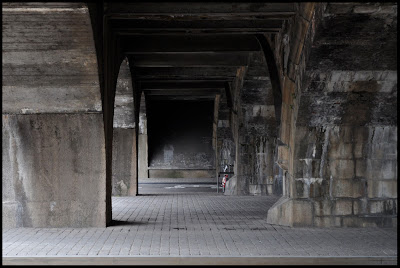 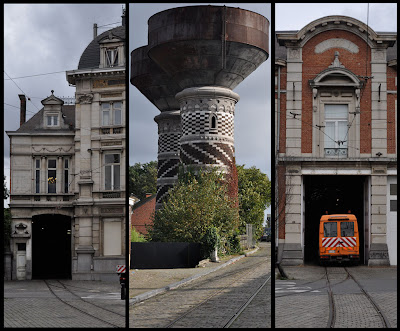 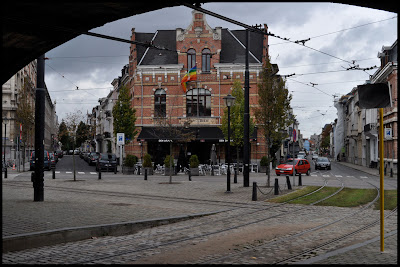 Posted by Phil Beard at Saturday, November 12, 2011 No comments: 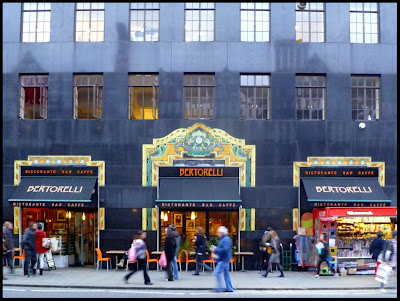 A left turn off Regent Street, just south of Oxford Circus, leads into Great Marlborough Street where there stands a large shiny black box of a building all dressed up with some discreet golden trim on the cornices and sherbet-coloured jazz-moderne motifs in enamel over the showroom windows. It’s diagonally opposite the pseudo-Tudor, half-timbered gables of Liberty’s store and in such noisy company, easily overlooked. For over 80 years it has occupied the corner site at the junction of Argyll Street as a modest outpost of a Manhattan aesthetic that is otherwise unrepresented in London. Widely regarded as central London's best Art Deco building, it was designed by US architect, Raymond Hood (1881-1934) and built in 1928-9 as a showroom and office block for the UK subsidiary of the American Radiator Company for whom he had previously designed a building in Manhattan. 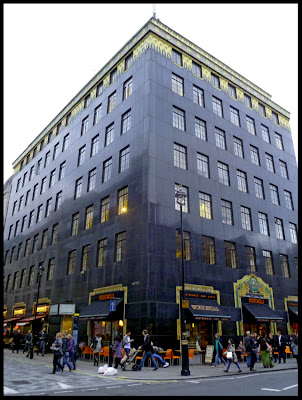 For the New York building in 1924 Hood employed polished black granite cladding to symbolise the blessings of coal as an energy source and embellished it with flame-inspired motifs to symbolise the warm air circulating around the American home. A modified version of this scheme was applied to the much smaller London building known as Ideal House when it opened in 1928. Hood’s relatively brief but influential career began in 1922 when his design (in collaboration with John Mead Howells) won the competition for a prestige skyscraper to house the Chicago Tribune newspaper. The Tribune Tower embodied an anachronistic neo-Gothic style and derived its impact from the massive flying buttresses that supported the top of the 36 storey tower. It was a long journey, in less than a decade, for Hood from this decorative complexity to the relative austerity of Palladium House. Seven more bays were added to the Argyll Street frontage in 1935 and although the original proportions of the building were seriously compromised it remains a rare example of a London building of distinguished North American ancestry. 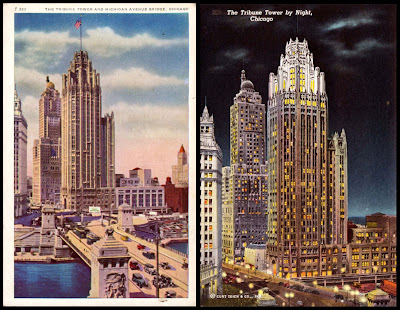 Posted by Phil Beard at Wednesday, November 09, 2011 No comments: