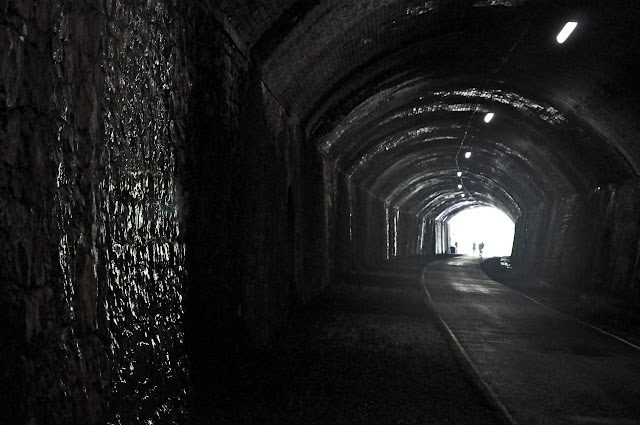 “There was a rocky valley between Buxton and Bakewell, once upon a time, divine as the Vale of Tempe... You Enterprised a Railroad through the valley - you blasted its rocks away, heaped thousands of tons of shale into its lovely stream. The valley is gone, and the Gods with it; and now, every fool in Buxton can be in Bakewell in half an hour, and every fool in Bakewell at Buxton; which you think a lucrative process of exchange – you Fools everywhere.”

John Ruskin, master of self-righteous Victorian bombast, thus addressed the British working-man in the pages of Fors Clavigera. Ruskin’s professed admiration for the dignity of labour did not extend to the itinerant labourers who toiled mightily on behalf of the Midland Railway carving cuttings through the limestone, drilling tunnels through the hills and bridging the rivers with viaducts, linking the fools of Buxton with their counterparts in Bakewell. After just over a century of trains from St. Pancras to Manchester, the railway that so offended Ruskin was closed in 1968. Subsequently the track-bed was converted into a footpath and bridleway (Monsal Trail) in the care of the Peak District National Park Authority. In May of last year the Park Authority completed a project to modify the former railway tunnels for public access and in doing so, eliminated the need for some lengthy diversions and greatly enhanced the walking experience. 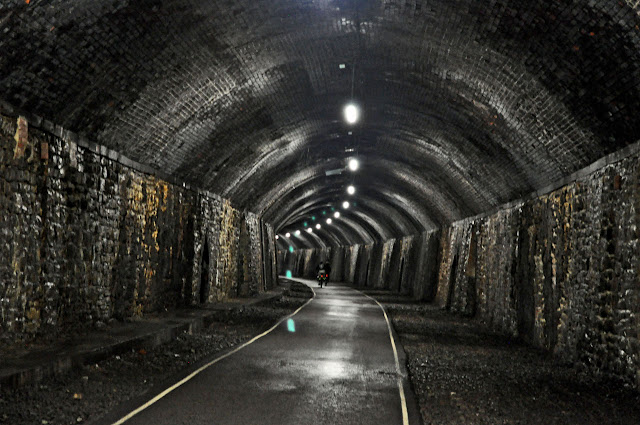 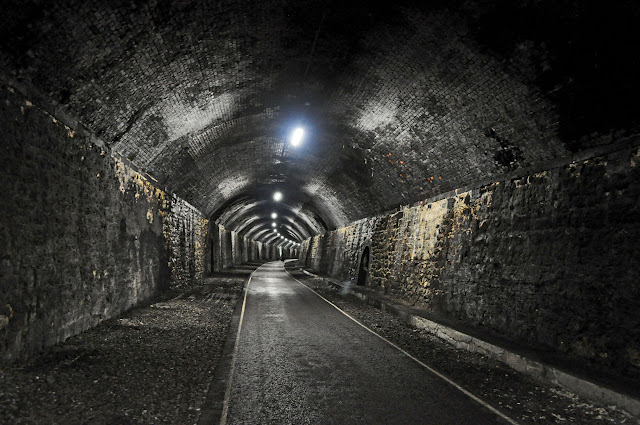 The subject of tunnels is one we keep returning to, offering fascination on a number of levels. Walking through tunnels it’s difficult to ignore the fact that these are places we are not meant to be in – deep in the earth, encircled by rock and scree and far from the nearest source of natural light. Then there’s the sheer volume of labour involved in construction, with primitive tools in conditions of terrifying discomfort. An enormous price was paid in terms of the amount of injury and accidental death inflicted upon the unprotected workforce. All this melancholia hovers in the back of the mind as we trudge from portal to portal through the chill and humid semi-darkness but nothing dispels it so rapidly as the need to take urgent evasive action as an army of super-fast cyclists sweep past. The risk assessments and safety cases have all been duly observed, damp proof overhead lighting has been installed and a tarmac path offers relief from the scrunchy ballast. A sooty, black squelchy gunk adheres to the tunnel lining and offers a reminder of its former existence – a notice warns of the damaging consequences of transferring this toxic post-industrial slurry to our lips. 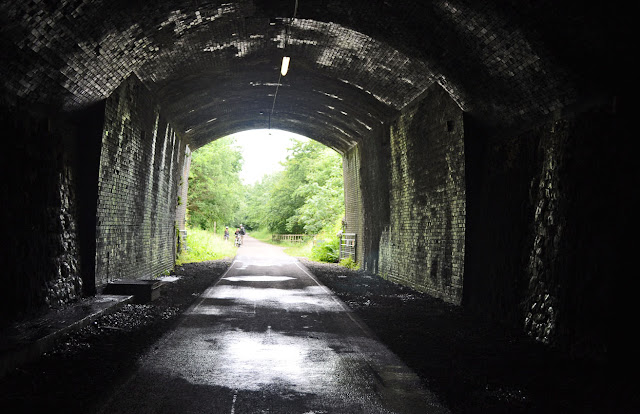 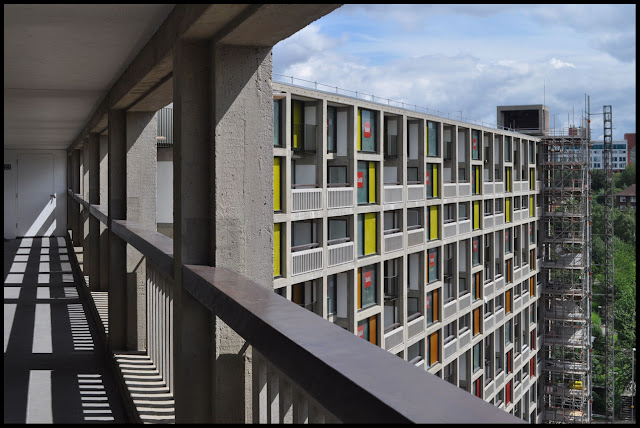 Most utopian visions go into gentle decline as the years pass by but Park Hill in Sheffield, like many high-rise social housing developments, fell from grace at speed. The fame it now enjoys is a product of its dramatic domination of the city skyline and the scale of ambition, all the more striking in a culture where the preference is for modest, provisional, interim, incremental solutions to housing needs. It was a major statement that reflected the city’s self-confidence. Almost 3,500 residents were accommodated here when the buildings were completed in 1961 but as the novelty wore off it became an increasingly unpleasant place to live – poor maintenance, sound insulation issues, sub-standard materials and anti-social behaviour all contributed. The argument about responsibility for this goes on – target-obsessed city planners insensitive to the needs of families with children, architects with grandiose ambitions, constant downward pressure on housing budgets and feckless tenants have all attracted blame from one quarter or another. 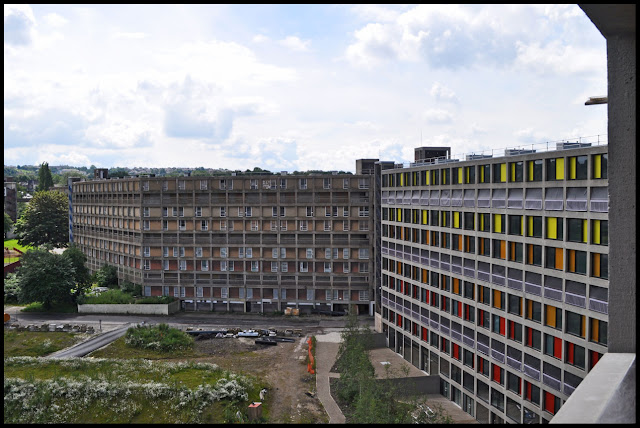 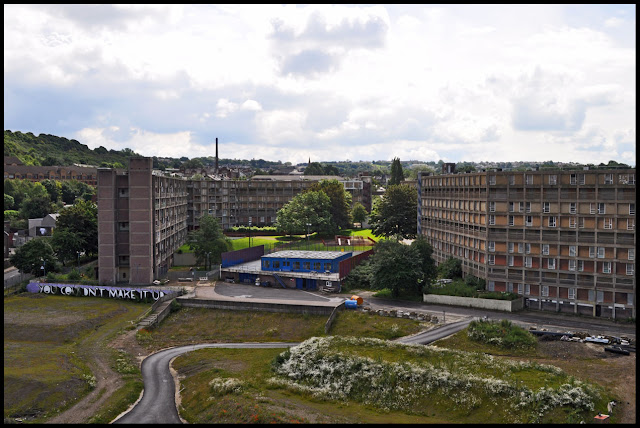 Fifty years having passed since completion, the scheme fits a historic narrative that leads back to Marseille and le Corbusier’s Unité d’Habitation and to the Karl-Marx-Hof in Vienna. The linked access decks (streets in the sky) at every third level caught the public imagination and the buildings attracted admirers and detractors in equal measure until in 1998 English Heritage awarded grade II* listing. Fourteen years later, only the southernmost low-rise buildings remain occupied by council tenants. The greater part of the scheme is vacant with the initial phase of refurbishment and internal remodelling by developers Urban Splash (closely monitored by English Heritage) nearing completion. The first block to be finished should be ready for occupation in December and a sales campaign is underway. The campaign must contend with a generalised cultural antipathy to concrete and high-rise (brutalist, unsympathetic, inhuman scale, anti-individualist, un-English) and additional hostility from enemies of the “heritage industry” and opponents of gentrification. 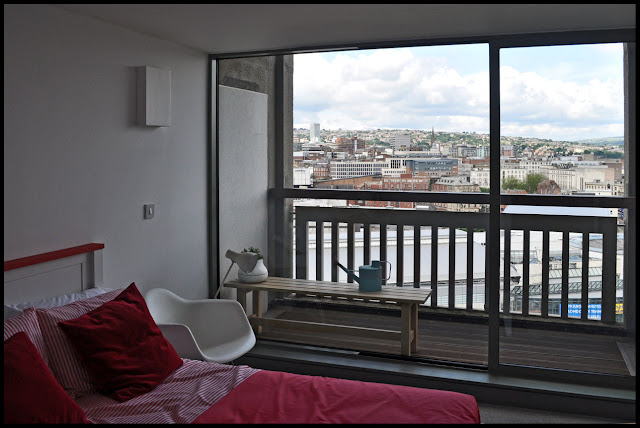 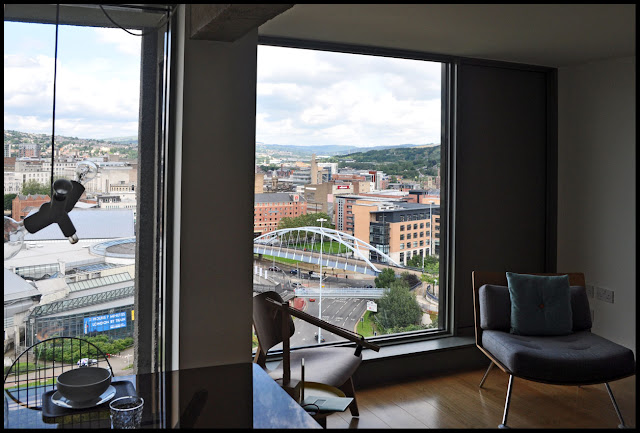 When you go inside, you find yourself trying to imagine exactly what it would be like to live there when the fascination of the spectacular views begins to fade into dull familiarity. Storage space is minimal, so a spare and austere lifestyle would be an advantage. An occupant with acquisitive habits would rapidly come up against the limits of what could be accommodated in rooms of modest dimensions. The original room plans were designed to Parker Morris standards – practical for 1961 but incompatible with the world of home cinema, jumbo-size fridge-freezers, walk-in wardrobes and wet-rooms. These confined spaces will have little appeal for the young professional looking forward to rolling out a four-seater leather sofa and a runway sized coffee table in a city centre loft apartment. Perhaps there’s a developing market for Modernism as nostalgia – a place where the coarse texture of brutalism serves as a corrective to the dazzling surface gloss of corporate aggrandisement. Will the rectilinear Modernist rhythms of horizontal and vertical elements appear models of restraint when compared with the computer-designed formal travesties that tower over the Gulf states or the Shards and Gherkins to be found closer to home? 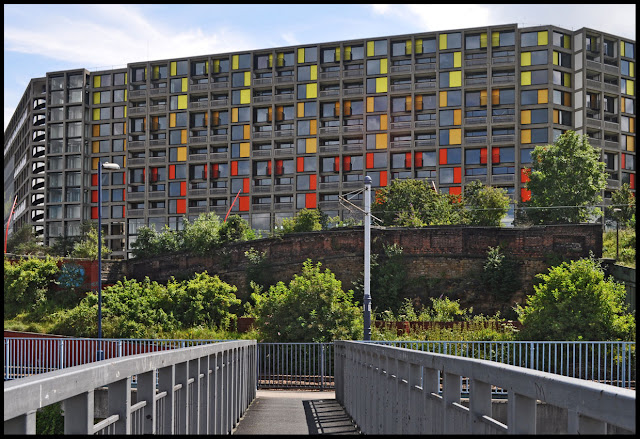 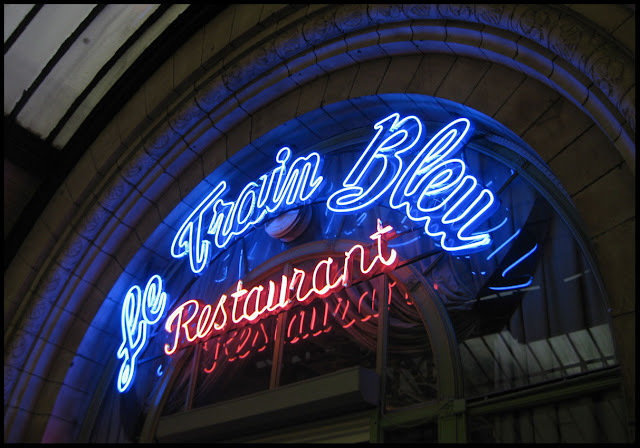 The name and the illuminated sign recall the great inter-war era of luxury rail travel but inside the restaurant at the Gare de Lyon all is Belle Époque. The Gare de Lyon was a prestige project timed to coincide with the Exposition Universelle in 1900 and the restaurant ambience is one of unrestrained glittering opulence – swags, cartouches, escutcheons, and super-size chandeliers vie for attention. Walls and ceilings are decorated with huge Salon-style paintings representing destinations served by the PLM while lascivious nude figures lounge around wrapped in a slick layer of gold leaf. Leather upholstery, fine cutlery and glassware, and condescending service from supercilious staff complete the picture. 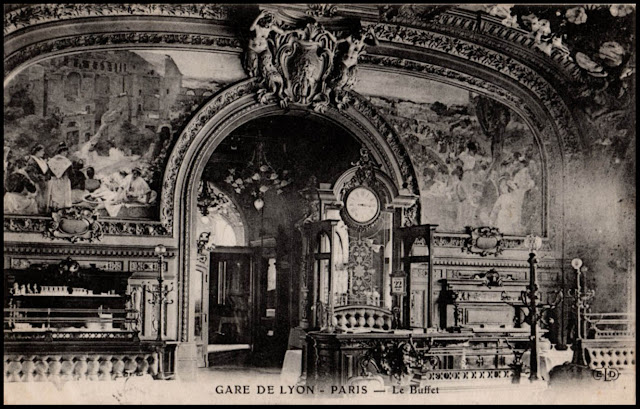 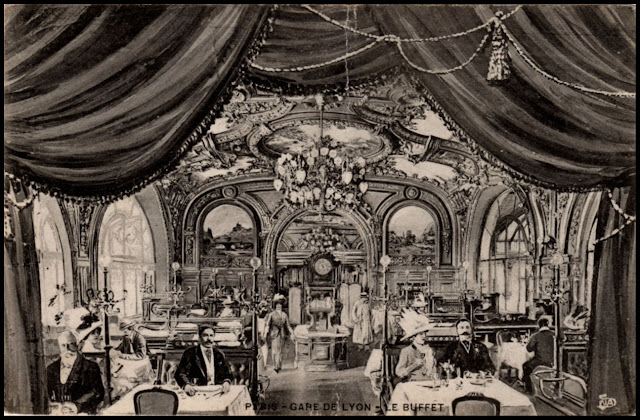