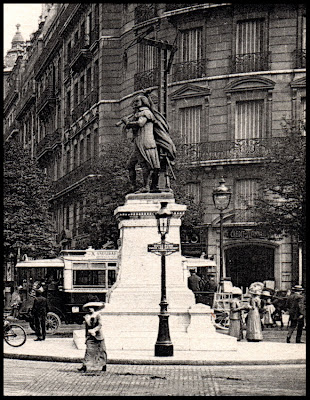 Claude Chappe (1763-1805) was the inventor of semaphore communication and honoured with a statue at the junction of rue du Bac and boulevard Saint-Germain in 1893, a century after his device had first been employed to relay messages from Paris to Lille and almost 90 years after his death by suicide at the age of 41. Sadly, his sculptural likeness would last only a few years longer than he did, being destroyed in the Second World War in 1942. His invention would endure for half a century before giving way to the electric telegraph in the 1850s. A special feature of this memorial was the replica semaphore apparatus in front of which the figure of Claude struck a suitably heroic pose. An empty traffic island makes a poor memorial for such an eminent pioneer of modern telecommunications. To read an elegantly drafted account of a road accident at this intersection in 1916, please follow this link. Google Streetview tells us that the café on the left is no more but the bank on the right is still operated by Crédit Lyonnais. 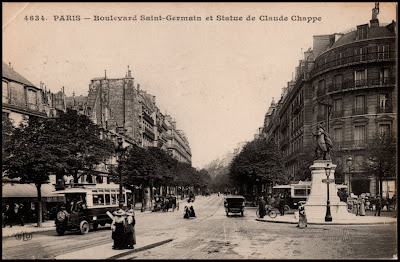 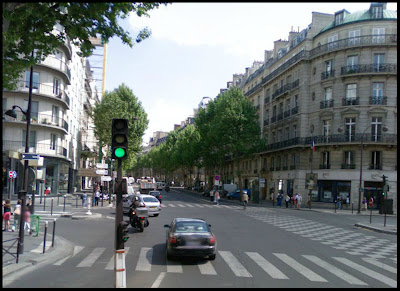 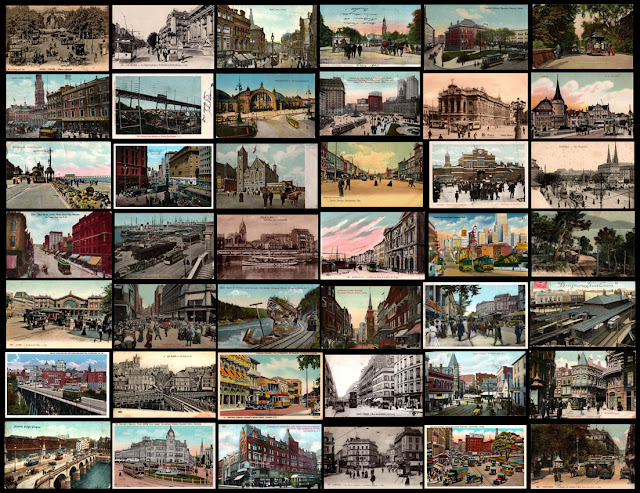 The cultural history of the tram is as yet unwritten but the tram was an early agent in the growth of suburbia as extended tram routes enabled developers to offer new homes for the out of town commuter. In North America (where trams were streetcars), Hollywood silent comedies made much use of the streetcars of Los Angeles as comic accessories. The most sublime cinematic tram-ride is in Murnau’s Sunrise (1927) where a remorseful George Brent desperately attempts to convince his terrified young wife that he has renounced all thoughts of murdering her while the tram proceeds from rural arcadia, via industrial suburbs to the frenzied heart of the metropolis. Murnau’s tram-ride was entirely filmed on the Fox lot and the city centre set he constructed was the largest ever in Hollywood, before or since. For Frida Kahlo the terrible injuries sustained as a teenager in a tram accident would overshadow her entire adult life and artistic output. In 1926 Antonio Gaudi had a fatal encounter with a tram outside his unfinished Sagrada Familia in the streets of Barcelona. Silent, empty and inscrutable trams share pictorial space with the skeletons, nudes and classical temples in the paintings of Paul Delvaux while blunt-nosed and hard-edged trams chisel their way at terminal velocity through high-rise canyons in Frans Masereel’s woodcut urban visions. In literature the most poignant evocation of the tram is in Victor Klemperer’s wartime diaries (I Shall Bear Witness, To the Bitter End) in which he bleakly and dispassionately recorded the incremental exclusion of Jews from the trams of Dresden, by degrees confined to the open-air rear platform before total prohibition was imposed. 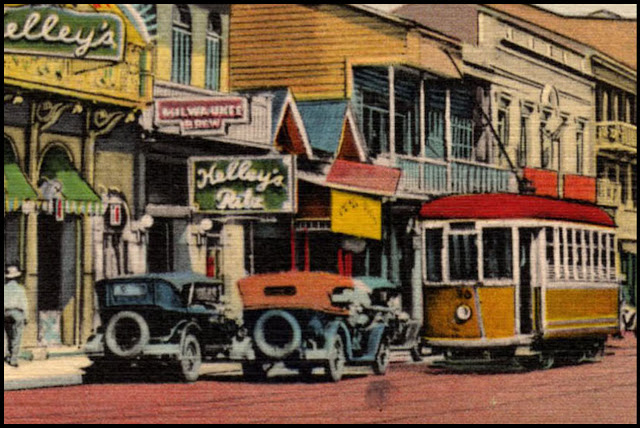 The days when the tram reigned supreme in the streets of the world’s major cities (the first two decades of the last century) coincided with the heyday of the picture postcard leaving a rich legacy of images of trams ruling the streets. These images come from postcards accumulated over many years without much regard to the traditional preoccupations of collectors such as condition, completeness or specialisation. Indeed, the surface stains and blemishes, the scuff marks and edge wear, the postmarks and postage stamps and fragmentary inscriptions all enrich the mysterious lustre of postcards and their ability to burrow deep into our visual imagination. A combination of traditional coach-building skills and the very latest in electric traction motors placed the tram at the forefront of early engineering technology and its continued survival across the world is evidence of its value for mass transit. Even in countries where private interests tend to take priority over the public interest, the tram is making something of a comeback, having been largely eliminated in Britain (where it was seen as an impediment to the free movement of private cars) and USA (where powerful automotive and oil business interests conspired to take control of tram systems and convert them to bus operation). 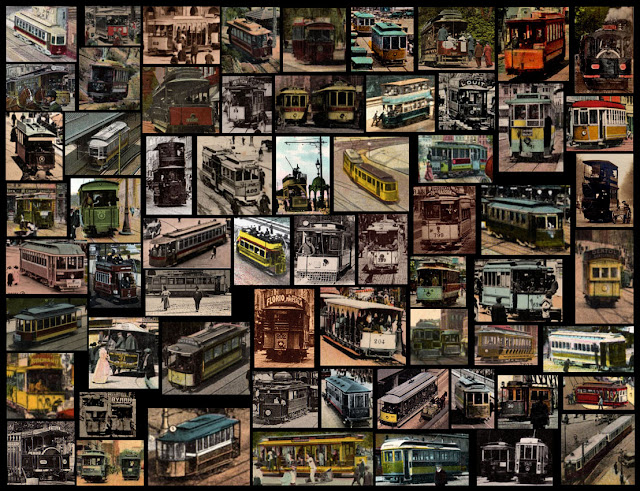 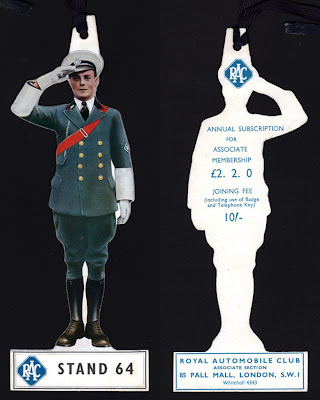 Two vintage cut-out bookmarks that show a gratifying eagerness to please. The RAC man stands ready to lend assistance to the stricken motorist struggling with a broken fan-belt or a defective clutch cable. Our top-hatted friend from Monkey Brand takes his mission to inform on to the streets, taking care to ensure that we don’t waste our time reading the wrong side of his sandwich board. Despite a personal compulsion to collect all things paper and card, the case for collecting bookmarks never seemed very convincing. 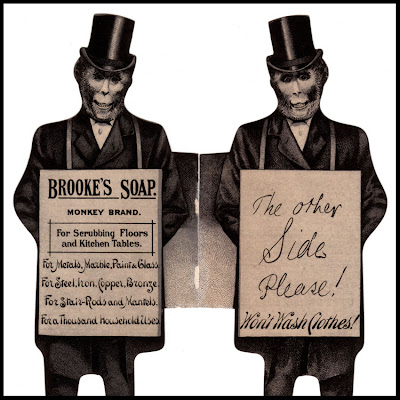 Posted by Phil Beard at Thursday, February 16, 2012 No comments:

Postcard of the Day No. 53, Wine, Women and Song 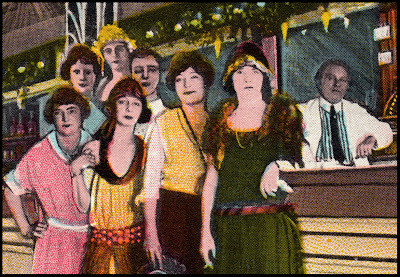 The jaunty promise of spicy glamour in the caption is seriously undercut by the facial expressions on display on this postcard from south of the border in Tijuana. These demi-mondaines confront the camera with disconcerting neutrality and distance. A solitary ghost of a smile hardly lifts the mood of sullen menace. The barman’s reptilian stare does nothing to dispel the feeling that we have entered a David Lynch universe. Some industrious retouching has taken place with the usual dubious results – most of the redrawn faces resemble inept female impersonators. For Tijuana this was the era of Agua Caliente, a place to escape Prohibition and over-indulge in alcohol and gambling, when the city was a playground for the Hollywood elite. 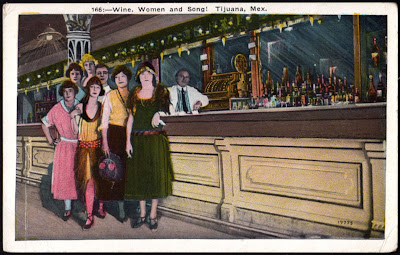 Posted by Phil Beard at Wednesday, February 08, 2012 No comments:

The Room in the Elephant 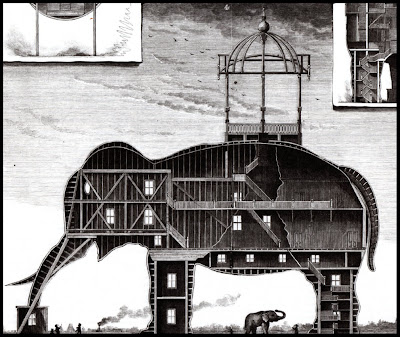 There’s a long tradition of eccentric architectural forms, often inspired by the desire to symbolise spiritual or religious beliefs. The Colossal Elephant of Coney Island has more temporal origins being inspired by the need to maximise returns on sums invested. As the Scientific American dated July 11, 1885 expressed it the purpose was “to abstract the unwary dime from the inquisitive sight-seer”. Designed to function as a hotel by architect J Mason Kirby for the developer James V Lafferty, it was constructed in timber clad with sheets of tinplate in 1885, a decade before the railroad arrived and two decades before Luna Park and Dreamland amusement parks set the tone for future development. When complete the Elephant had seven floors of accommodation and a suite of 34 rooms some of which took their names from the creature’s bodily functions. There was a stomach room, thigh room, hip room and brain room – in the interests of public decency the more basic organs went uncelebrated. Surmounting the creature was a howdah that served as an observation platform with spectacular views. Accounts of the actual operation of the hotel are hard to find and it would be interesting to know whether its unusual form rendered it impractical as a working hotel. It seems that decline was early and rapid – some sources claim it became a house of ill-repute, others that it stood vacant for several years before being destroyed by fire in September 1896. Lafferty developed two other less ambitious seaside pachydermal pavilions, one of which, named Lucy, is still in existence in Margate, New Jersey. 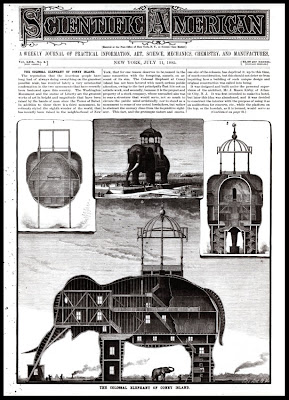 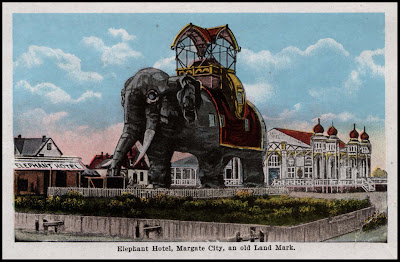 Beyond Endurance with Mr. Peanut 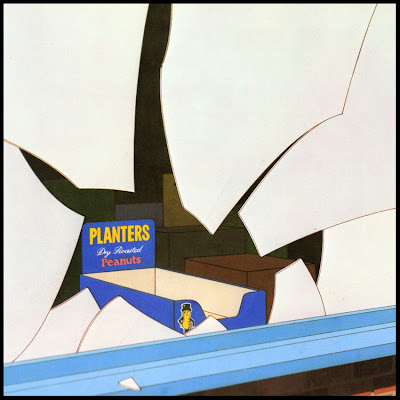 In our most recent commentary on the illustrious career of Mr. Peanut there was a facetious remark about his presidential ambitions. I have since been reminded that there was a precedence for this in 1976 when a former peanut farmer, Mr. Jimmy Carter was elected to the highest office. He may well have been the last occupant of the White House to be in possession of a fully developed conscience – no surprise that he turned out to be a one-term president. Meanwhile, Mr. P crossed the Atlantic around 1979-80 (about the same time that Jimmy Carter was losing the election to Ronald Reagan) and attempted to reposition himself as an arch-sophisticate with the slogan Temptation Beyond Endurance. These examples come from the resulting campaign of magazine advertising in which artful illustration was deployed to transcend the humble nature of the product. Standard Foods employed the agency Cherry Hedger & Seymour Ltd. who produced the examples we see here. The ligne-claire homage (above and immediately below) to Magritte was the work of Jeffery Edwards and the Old Mastery image of a divine hand picking up a truckload of Planters Nuts (it could just as readily read in reverse as if God was lowering the precious cargo to the ground) was painted in oils by Warren Madill. There’s a Degas pastiche and a copywriter’s infernal fantasy that wraps up the temptation theme. This was a brief interlude and recent promotion of Planters products in the UK has been relatively conventional. Mr. P is now in the custody of Trigon Snacks where he finds himself in the unlikely company of Big D babes whose dubious charms are revealed as punters buy up the packs of peanuts that conceal her scantily clad image. 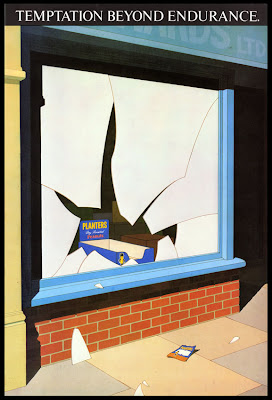 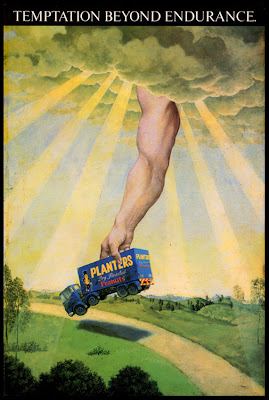 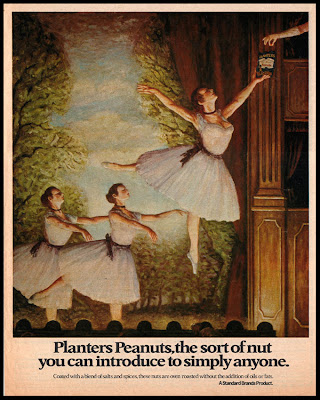 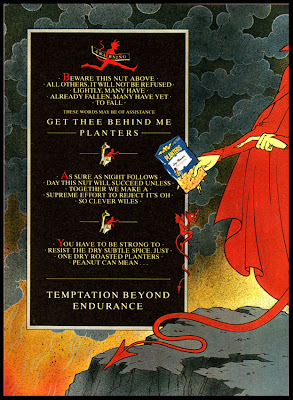