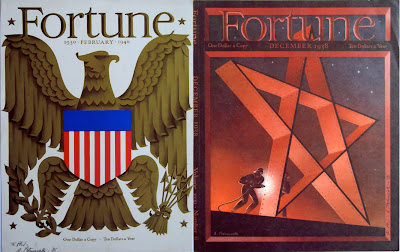 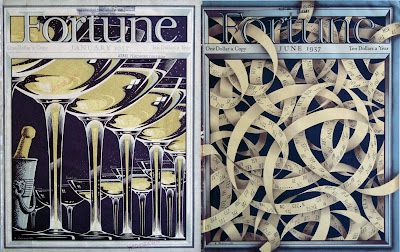 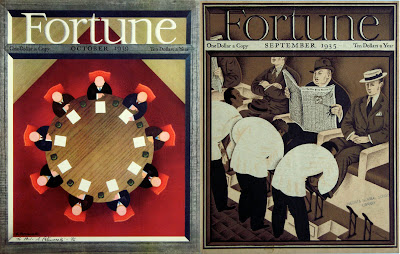 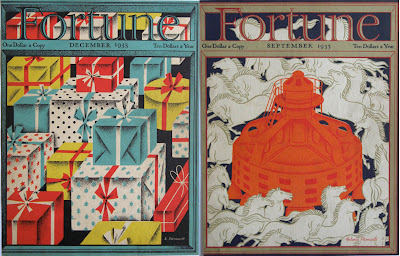 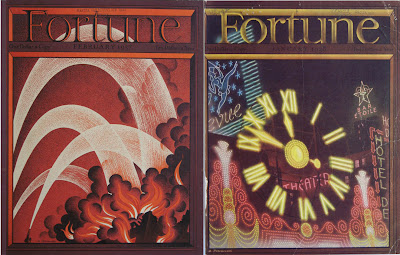 Chris Mullen visited Petruccelli at his home in Mount Tabor, New Jersey in the summer of 1986 where he was received with great hospitality and generosity and a pictorial record of his trip and the results of his research can be read on his website, the Visual Telling of Stories. In the course of that visit Petruccelli was kind enough to make a gift of a number of signed and dedicated proof covers to Chris and myself and those covers are highly treasured possessions. Antonio Petruccelli died, aged 87, on November 11th. 1994 – this is dedicated to his memory with deepest thanks for all the wonderful work he produced.
Posted by Phil Beard at Thursday, September 27, 2007

I have never seen this artist's work before--but I'm thrilled to see it now! I haven't felt this inspired since I discovered Alex Steinweiss. Thanks for the gorgeous images and the fascinating bio!

About 10 years ago I picked up a copy of Fortune magazine in a secondhand bookshop in Burbank, that featured the amazing painting of the iron smelting furnace inside and the orange star on the cover. I have now discovered (from Chris Mullen's site) that the illustrator was Petruccelli.

The other treasure I discovered inside the magazine was that it (and several more in the shop) had been cleared from the Walt Disney Studios Library, and the library cards inside carried the signatures of the animators who worked there in the late 1930s. Some of them were my favourite art directors and background painters.
Brilliant!

Thanks for your work in assembling all these amazing images.

d'angelo,
Sorry but I have no information about this.

His family is from the area of Potenza, Italy.