Postcard of the Night No. 4, Palestine, TX 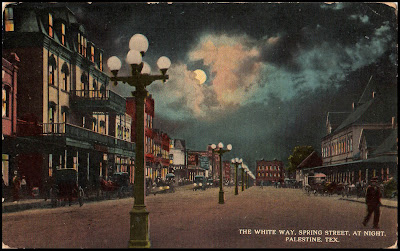 There’s a city in the state of Texas called Palestine (pronounced Palesteen) and it’s the subject of today’s nocturnal treat. Spring Street as seen here is a broad thoroughfare with substantial buildings on the left (hotel, offices, stores) and what may well be a railroad station on the right. The clusters of globe lamps imply civic pride. A brief wander around downtown Palestine in search of this location, courtesy of Street View, was inconclusive – Spring Street (or West Spring Street to be precise) appears to be a wide boulevard with low-rise business premises (set back from the road) on the north side and an extensive Union Pacific rail freight yard on the south side. If the scene on the postcard still exists it must be in a different place. The image itself has a pleasing air of intrigue as if the citizens have taken refuge in their homes leaving the streets to a handful of vagrants. Early motor vehicles and horse drawn transport co-exist under the spectral moonlight. Many musical favourites have Texas connections and there must be a chance that the Bob Wills tour bus swept through these streets in the 1940s and disgorged its cargo of Texas Playboys at a local venue for a euphoric session of fiddle, steel and Western Swing. Meanwhile in another part of town the rhythmic pulse of the T-Bone Shuffle might be heard slinking forth from a juke joint where the great T-Bone Walker entertains an enraptured audience with a display of guitar picking with his armour plated teeth.
Posted by Phil Beard at Thursday, August 12, 2010