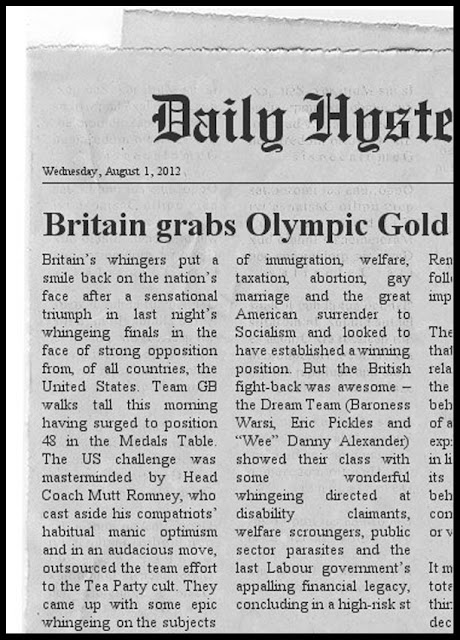 Britain’s whingers put a smile back on the nation’s face after a sensational triumph in last night’s whingeing finals in the face of strong opposition from, of all countries, the United States. Team GB walks tall this morning having surged to position 48 in the Medals Table. The US challenge was masterminded by Head Coach Mutt Romney, who cast aside his compatriots’ habitual manic optimism and in an audacious move, outsourced the team effort to the Tea Party cult. They came up with some epic whingeing on the subjects of immigration, welfare, taxation, abortion, gay marriage and the great American surrender to Socialism and looked to have established a winning position. But the British fight-back was awesome – the Dream Team (Baroness Warsi, Eric Pickles and “Wee” Danny Alexander) showed their class with some wonderful whingeing directed at disability claimants, welfare scroungers, public sector parasites and the last Labour government’s appalling financial legacy, concluding in a high-risk strategy with a whinge about their fellow atherletes’ frailty in the field of combat and their miserable haul of medals. Romney’s team responded instantly with a spectacular whinge about the innate British capacity for whingeing, an unfair advantage achieved by generations of unchallenged supremacy. Spirits sank in the British team and all seemed lost until sprint-whingeing specialist (and Team Captain), Michael Gove came to the crease and unleashed a volley of whingeing on the subject of education. Spectators were stunned when he reminded them that not a single British school-leaver was capable of building a Large Hadron Collider without assistance or counting to a million in Roman Numerals. Skipper Gove took whingeing to a new level with a bitter complaint about the national cult of educational mediocrity which had brought this once-proud nation to financial ruin. Judges were unanimous – Gove had inspired Britain to an unassailable position and Gold was, at last, within our grasp. On a sad note, Romney was less than gracious in defeat and questioned the entire basis of the British triumph claiming, “Yeh, the Brits were good, but they got some questions to answer. What we saw tonight was whingeing at the limits of human endurance. I’m not saying these guys were on anti-euphorics and depressants but someone needs to find out the truth.”

A Phil Space exclusive from our man in the empty seat. 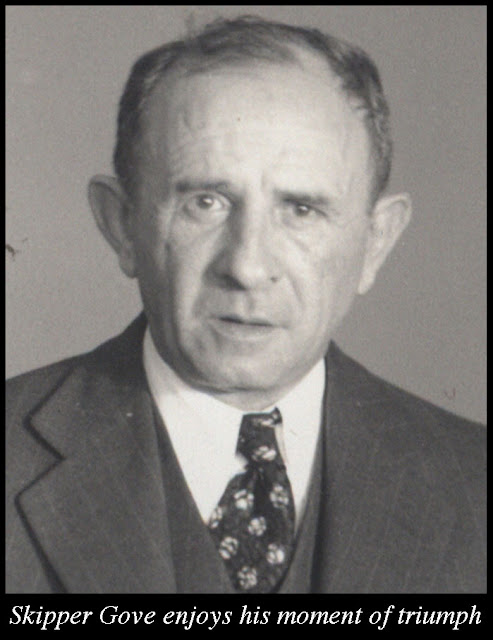